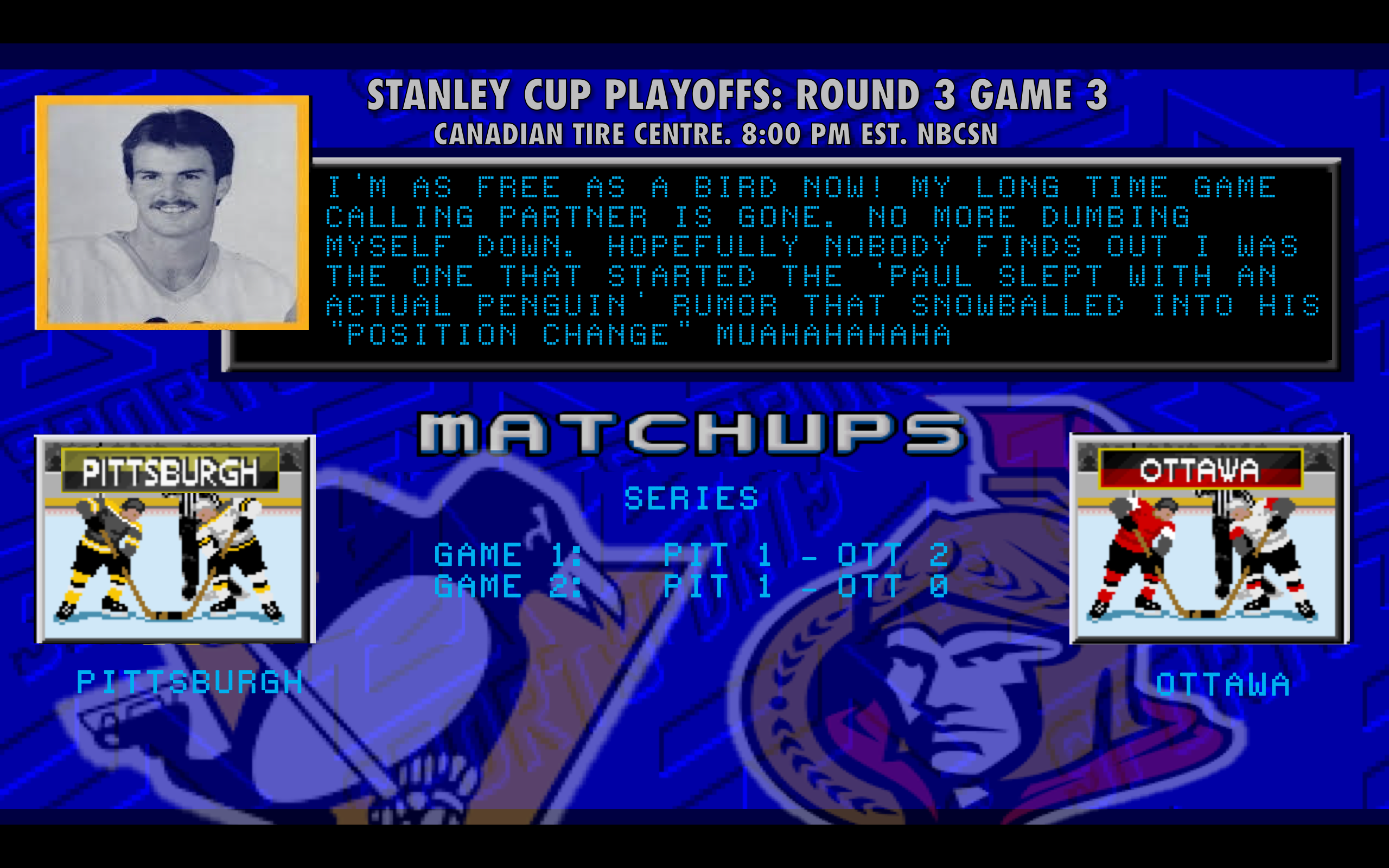 As the Penguins boarded their plane to Ottawa yesterday the beat reporters were making injury assumptions based on who was carrying their own luggage and by what means they were doing so. Apparently the boredom experienced during Ottawa games has now seeped into off days as well, terrific. The main focus was Justin Schultz, who awkwardly crashed into the boards right shoulder first and left the game immediately. He was spotted carrying his own luggage in his right arm! That’s some in depth reporting, folks. It’s only 6:30 am but I can tell you right now that Sullivan is going to list Schultz as either day-to-day or gametime decision and Penguins Twitter is going to melt down. I took Sullivan’s “everybody is a gametime decision” response following Monday’s pregame skate as him begging the media to quit asking him. Since they won’t do that I would just start making shit up if I’m Sullivan… “Crosby is out tonight because he went back to Washington looking for his mouth guard, said he can’t focus without it.” Shit that is actually believable.

So here we are preparing for game 3. The Penguins were able to get to their game somewhat in game 2 despite being down a forward and a defender, and truthfully being down 3 of their top 6 defenders. I assume the gameday speech from Guy Boucher to his troops is “tonight we will trap them harder” or something. There will be a noticeable difference in the atmosphere tonight as the series shifts to Ottawa for the first time, for the majority of the first two games The Paint Can attendance was pretty quiet due to the unexpected slow play but that won’t be the case tonight. Somehow their fans actually cheer during games, rumor is they practiced their patience by cheering for paint to dry.

The Penguins started rolling in the 2nd period of game 2, but it wasn’t their best. It wasn’t game 7 against the Caps Penguins hockey. It was enough to get the job done and build confidence for breaking down the trap, and also stepping stones for how to approach the rest of the series. If the Penguins continue to build on the things they learn each game and Boucher doesn’t adjust systemically then it is only a matter of time before the games start to look like the last playoff series between the two teams. Some are hoping for Chris Neil to dress tonight to add a physical presence to the Senators lineup, playing with 11 forwards the game after the Penguins had to is the most Canadian thing ever. The Senators threw Neil into a game in the Rangers series and after accumulating 10x more PIMS than TOI the Senators won the next two games and the series. Of course it was against Baby Stuff so color (colour) me not impressed. If the Sens do dress Neil it will be up to the Penguins to keep Malkin and Kessel away from him, especially Malkin who has already let his frustrations show on the ice at the end of the last game.

This series hasn’t been the chess match anticipated with line matching, of course the game 2 injuries threw most matching opportunities out. Jacques Martin has been rotating the D to see who matches up best where, but against a team with 3 second lines the emphasis is less on man to man matching and more on playing the right defense regardless of opponent. We know what we are going to see from Ottawa tonight, so the only thing to look for is how the Penguins build on what they learned from the first two games. With positive adjustments, continued cycling low, the physical play and more emphasis on the forecheck the Penguins should be able to give Ottawa too much to handle in this one. I would look for Phaneuf to try to make a huge hit early, last game was the first time in awhile he’s had the opportunity to be on a highlight reel. Also, Scott Wilson is due a goal this month, and I think it is about time Conor Sheary hits the twine. You’re ready, I’m ready, let’s watch the trap!