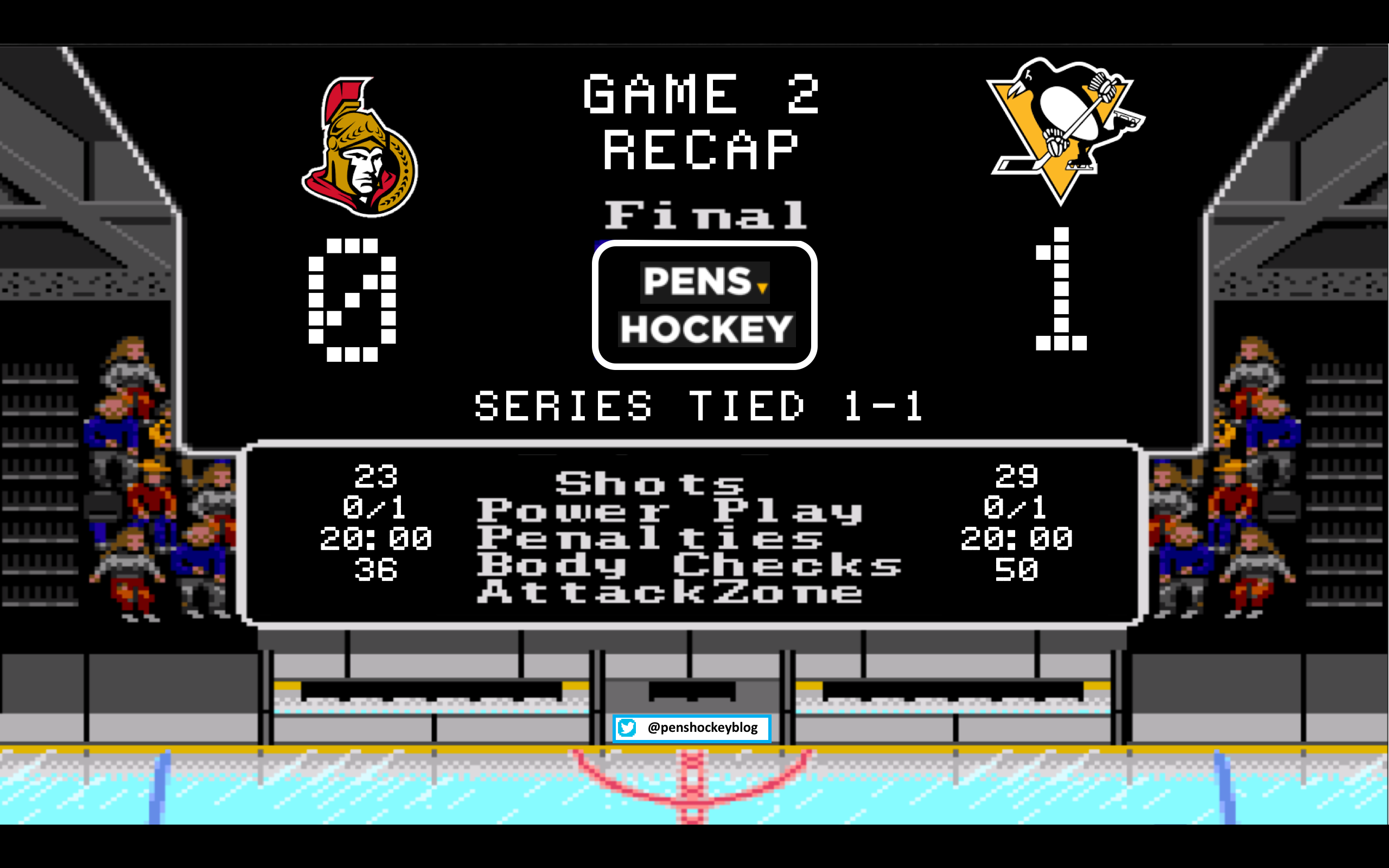 There is something really odd about this Penguins team, the more players you take away the better they seem to play. Obviously it all catches up eventually but it is almost unbelievable how time and time again this season certain players have been asked to give 100% effort 100% of the time and they have been able to. Patric Hornqvist didn’t practice with the team on Monday or at Tuesdays gameday skate, but he was on the ice for pregame warmups so all seemed to be good. Then he was scratched and Carl Hagelin was put in. Later in the first period 192 pound Bryan Rust was taken out of the game by 219 pound Dion.

phaneuf with a huge open ice hit on rust pic.twitter.com/Y0AK7ybpWV

Rust cuts right into Dion which certainly makes the impact worse, but I don’t think Phaneuf left his skates before the impact as you can see by freezing the next gif

Look from behind of the Phaneuf hit on Rust. Rust and Schultz both currently in the locker room with injuries. pic.twitter.com/FlUfKgMW5y

Rust left the game after a brief conversation with the medical staff on the bench, presumably for concussion protocol. He would be seen in pretty good spirits later in the night which is a good sign:

Rust: “This guy was a menace all over the ice tonight.”

Though Rust seems okay the majority of Penguins nation should probably be focused on Justin Schultz, who went awkwardly into the boards and immediately got up. That is the scariest part about the Schultz situation. When a player goes into the boards in a seemingly normal way (in hockey terms of normal) and gets up and immediately heads to the bench then he knows something was wrong.

Players don’t leave the ice that quickly unless they felt something go. As you can see his primary impact is at the shoulder, which could easily dislocate or fracture his collarbone. It could also just be a badly bruised elbow/shoulder, we can hope.

The first period looked to be a continuation of game 1 and other than the injuries mentioned above not much happened. Both goalies made some saves. Scott Wilson and Carter Rowney began their impressive nights on the right foot. Wilson would finish the game with 10 hits while Rowney wasn’t far behind with 7. The two were relentless all night and the Ottawa players knew when both were on the ice. With this we also saw some superstar treatment on Erik Karlsson which was refreshing to see a Penguins team finally do.

Neither Rust nor Schultz were on the bench to start the 2nd, so now the Penguins are down their top 2 offensive defenders and have to play the rest of this game with 11 forwards. In my opinion Guy Boucher missed an opportunity here to move his team into an offensive attack for the first 8 minutes or so to really stress the depleted Penguins. He didn’t do this however and Ottawa continued playing their same style. Again both goalies came up big when needed, and Scott Wilson recorded 4 hits on one shift at one point. The Penguins tilted the tables in the second half of the period and started to look like Penguins hockey. The Senators were blocking everything on their way to finishing the game with 18 blocks, however after an offensive zone keep in for over 90 seconds in the final 2 minutes you could sense the Penguins were getting comfortable.

Regardless of the opportunities this was a one goal game with 20 minutes to play. I am most likely going to be able to copy and paste that line for 3 of the next 4 games. The Penguins slowly got the engine running to get back to the way they finished the second period but just couldn’t get the puck through. Phil Kessel has always had conversations with himself on the bench during games but in this one he was throwing a party in his head. He wanted to do better. He was determined to do better.

Solid tweet for once. Here is a good capture of the majority of Phil showing how lazy he is and how little he cares about his contributions:

Finally 13 minutes into the period Evgeni Malkin gets the puck in the neutral zone and gives the ole head fake to the Ottawa defense that frees up just enough space. The rest of the Ottawa players converge on Malkin at the blue line as they are told to do and they miss Phil Kessel coming down the center of the ice. Evgeni Malkin doesn’t miss Phil Kessel. Kessel had his first shot blocked and then treated the puck as if someone in his head called a hotdog a sandwich:

Do you Phil the thrill? pic.twitter.com/8bDkTmNNxm

She knew her bro could do it:

And of course Benstonium brought it down…

Now trailing, Ottawa had to come out of their shell and man did they. One thing about Ottawa, all of their players take slappers from EVERYWHERE. If there is an opening they will rip the shot looking for redirections and deflections. Marc-Andre Fleury was strongest when the Penguins needed him the most and they were able to shut the door. Emotions brewed over after a pretty chippy game and the final 13 seconds took about 12 minutes to get all of the penalties sorted out. Prior to this Karlsson tried a hail mary and ended up icing the puck which turned out to be the game deciding play as the next faceoff put Anderson back in the net. NBC questioned the replacement of Anderson and honestly it makes sense, you have 14 seconds to get down the ice so why put your goalie back in, the odds are not in your favor anyways. Either way just like Phaneuf’s wife 13 seconds wasn’t long enough and they skated off unsatisfied.