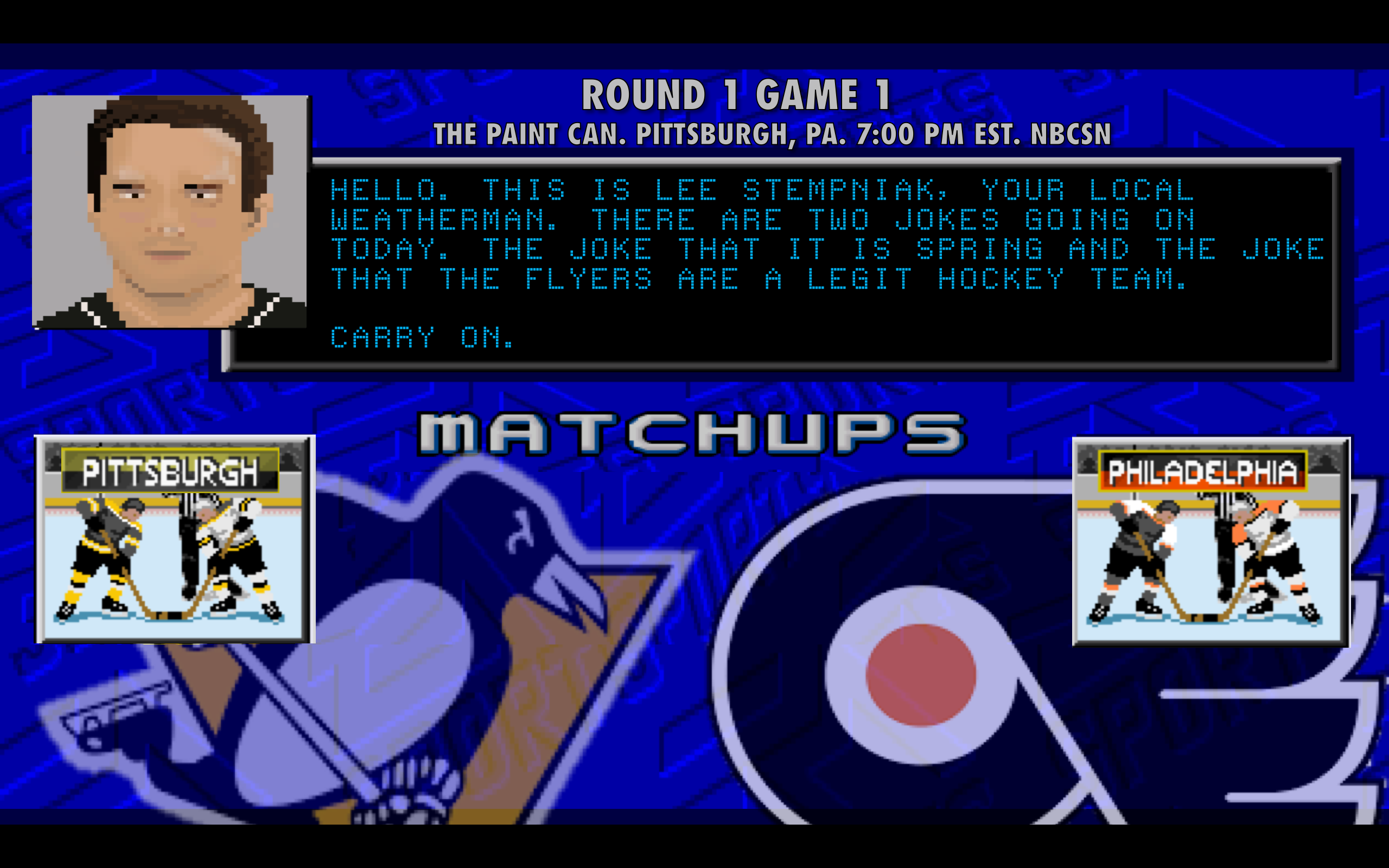 The events that have transpired over the last 7 months can be forgotten. Every time you’ve gotten wood over a Phil Kessel wrist shot is now in the past. Marc-Andre Fleury has been in the past. Everything involving the Pittsburgh Penguins regular season of 2017-18 is now in the past. The only thing that matters now is that thing you feel in your chest. Is it a heart attack? Is it that questionable breakfast burrito? Is it that awful, grotesque shade of orange that makes you jealous of Stevie Wonder? I’m no doctor, but I’m going with the third. One week ago it seemed the road to a third consecutive Stanley Cup would start with the same opponent the Penguins opened up with last year, instead they open up with the team Columbus tried to imitate last year. This year the Penguins get the original trash boys and just the thought of seeing that logo synonymous with 4 decades of failure later tonight mixed with Pierre McGuire talking about anything has me on the brink of murder.

One of the best storylines in the last few days has been the reminder of the 2012 series. You all remember the one, the Flyers went up 3 games to 0 before eliminating the Penguins in 6. The Penguins as a team imploded with immaturity while Matt Murray, I assume, sucked in goal. Flyers fans are bringing this series up over and over again because like the rest of their fandom, it’s based in the past. Since that series the Flyers have missed the playoffs every other year with tonight being just the 3rd playoff series in 6 years. That series was also the Flyers last series victory in the Stanley Cup playoffs as the team has won just 6 playoff games in the 3 rounds that have followed that series victory, this includes the second round of 2012 and the two first round exits of 2014 and 2016. Since that series the Penguins have won 13 playoff series including their last 8 in a row and tonight the Pens start a quest for their 3rd Cup in three years but hey, 2012 brah. “Remember 2012!!!” Funny story, if it happened tonight:

So what is the difference?

Crosby and Malkin are still as dangerous, and they’ve turned James Neal into Phil Kessel and Patric Hornqvist. Translation: too much fire power

Over the last few years the rivalry between these two teams has kind of faded off from where it was, mainly because the Flyers haven’t played the Penguins in the playoffs since that 2012 series which was the 3rd playoff meeting between the two in 5 years. Since then the regular season hatred has been a little watered down between the teams with only the fans holding the burning torches during the games “BANKRUPTCY!!!” “BRIDGES!!!!” wait for it… wait for it “CINDY CRYSBY!!!!”

The Flyers fanbase is suddenly feeling a little big in their britches after their football team decided not to suck for the first time in their history, welcome back to Earth sonny, this is hockey and currently the Penguins own this bitch.

So there we have it, the 12 forwards and the 6 defenders that each team will start the series with. On paper, this is the Penguins series to lose. The Pens top 9 should give the Philadelphia bottom pairings all they’ve ever wanted to handle and then some, and with the favorable last change at home Mike Sullivan has an opportunity to start a very favorable mismatch, though with those defensive pairings Dan Bylsma could probably find a mismatch.

What will it take for each team to be successful in this series? Pretty simple, the Penguins need to play their game and the Flyers need to pray.

The last two Stanley Cup runs have been exhausting, they have resulted in a lot of new Penguins fans, some are first time hockey fans, others are Pittsburgh sports fans that are realizing the Penguins are winning more than the other sports. Regardless, the real season begins tonight and everything is naturally magnified so lets try to keep some sense about us, shall we? Instead of tearing apart every little thing that goes wrong with this team how about we come together in embracing that they are trying to tie the Steelers in franchise championships while attempting to do something that no Pittsburgh team has ever done before, win three in a row. The quest for three begins tonight, and after tonight only 1 game has been played. There are 16 wins needed, 4 teams must be conquered, and the Penguins must best each of those teams in an orderly fashion starting with the Philadelphia Flyers tonight. It simply comes down to the Penguins needing 4 out of 7 wins against the Flyers.

When your ass starts clenching with every slapshot, your hands start flying around like you’re the referee even though deep down you know there isn’t a call coming, and you start screaming obscenities at the players, broadcasters and commercials, that’s when you know it is playoff hockey baby, and damn if it isn’t great to be back to back.