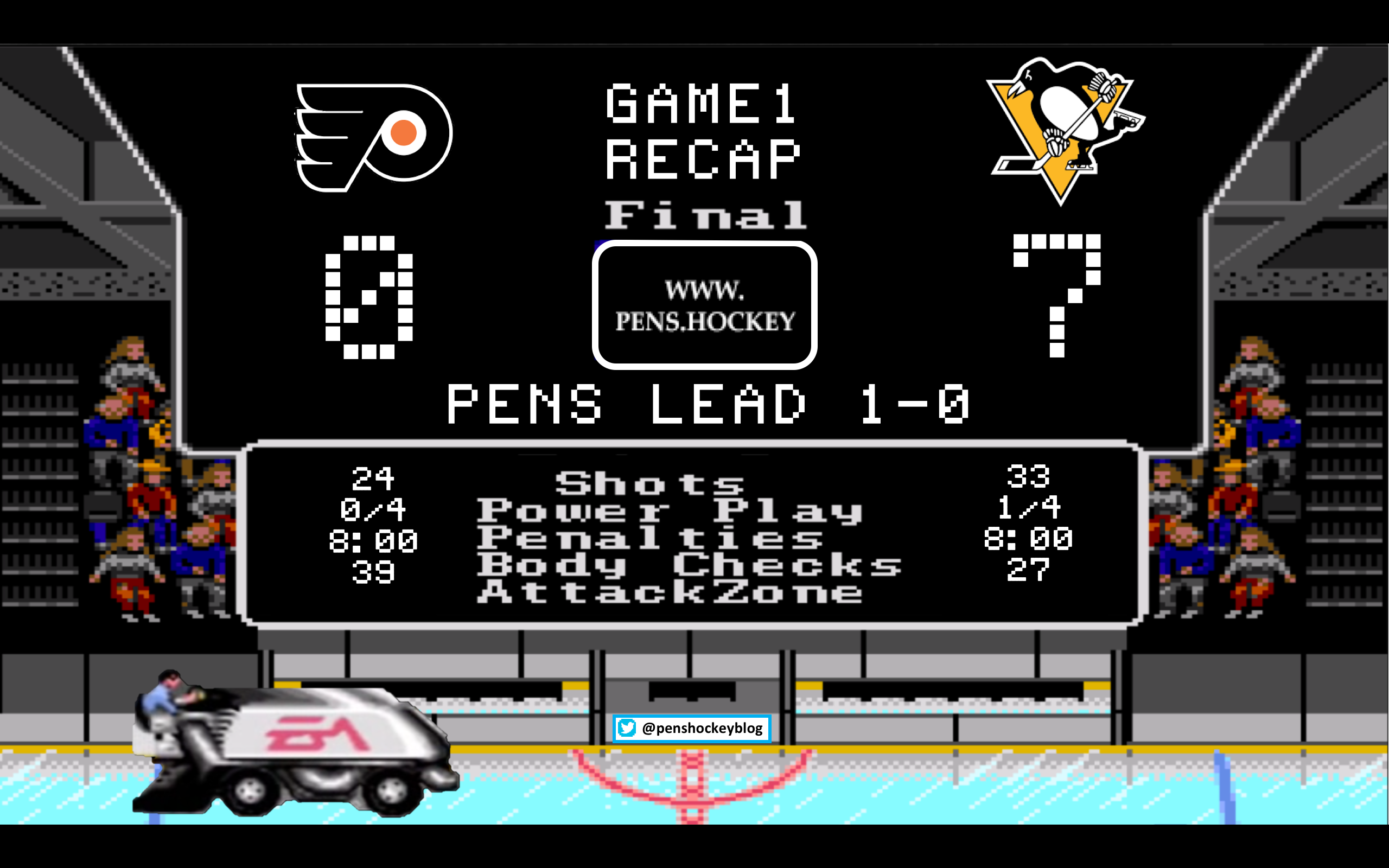 Good morning everyone, and especially to the city of Philadelphia. Man is it good to have playoff hockey back or what? Before the game there was a heated debate on Twitter as some Philadelphia Eagles fan was legitimately arguing that a single Super Bowl win is more impressive than back-to-back Stanley Cups because the Super Bowl is harder to win. With that type of logic I realized there is no point in making fun of Philly fans anymore because they are literally too dumb to understand my jokes.

If you missed this one, shame on you for 6 weeks.

All of the “remember 2012” people have either died or started talking about football. The best explanation for this game:

The Pittsburgh Penguins looked like a team that knew exactly how much effort to give in the regular season before turning the fuck up in the playoffs and looking like the juggernaut everyone knew they could be. Before we get into it what type of person would I be to keep you from your daily dose of the Grove?

So the bum just needs to score once per game.

Okay, score first, got it.

This is pretty incredible when you consider Bylsma was the coach for 6 years and made the playoffs in each of those years including a cup run and an ECF run under his belt. Bylsma finished his career with 8 playoff series victories.

As usual Mike Sullivan flirted with the media before the game when asked about Brassards status replying that the entire team is a game-time decision. Pointless to even ask at this point because that will be the response for the rest of the playoffs. This was the starting lineup:

Let it loose and let it fly, time to dig in to the details of the game, please don’t get a sexual harassment warning for your uncontrolled Pensboner.

From the opening faceoff The Paint Can was a freaking zoo, probably the loudest we’ve ever heard it as the fans showed their anticipation towards the beginning of this run. The Penguins then took over to the point where the crowd was basically on mute because of the display going on at ice level. The Penguins were looking like the Penguins were looking the last time we saw them in the playoffs. Two minutes in the Flyers were having issues in their own end, Kris Letang picked up the puck at the point and threw one in (on goal!!!) and blocker side to generate a rebound, the puck landed on Bryan Rusts stick.

Nothing special here, just the Bryan Rust formula of get the puck and put it on net and Brian Loliott giving his usual first round performance. You know what we’ll have bartender, go ahead and pour that Ole Rusty Ale

Following the goal the Penguins started dominating the Flyers in the neutral zone with tight checking and an aggressive forecheck rush. The team looked like they had restraints on them in the regular season and were set free. The Flyers panicked time and time again as they were forced to send long passes up the ice that were easily intercepted. Philly got like 2 shots on goal before the 4th line of Kuhnhackle-Sheahan-ZAR kept the puck in the zone for an entire shift, the Flyers couldn’t get the puck out and the Pens managed a full line change. The puck popped up to NBC sensation Sean Couturier who tried to make a play but Sheahan had other plans, he got the puck to Hornqvist who promptly found his Swedish Fish up front

Just a great shift by the Pens fourth line to pin the Flyers in the zone and make them panic a bit capped off by the relentlessness of Sheahan at the end of his shift to fight for the puck, that is known as the playoff effort. Smooth hands by Hags too to put the Pens up by 2. 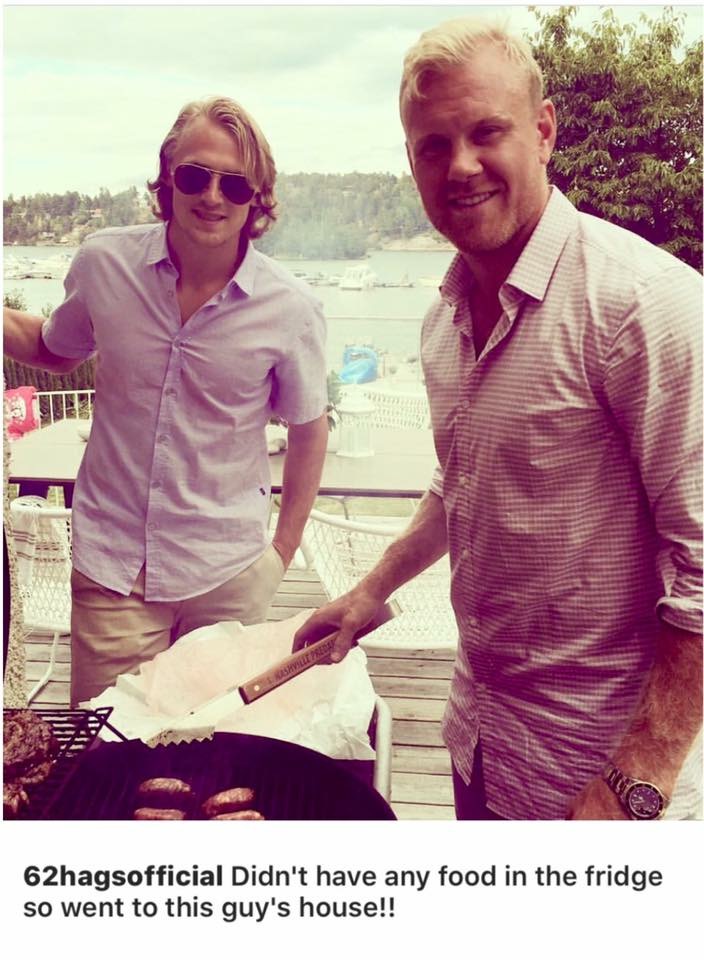 The Pens continued walking all over the Flyers but they couldn’t get that third goal, yet. Philly finally managed to get some offensive zone time and had a few good looks at goal, their best is shown below:

Does this look like a goal Murray gives up last week? What a fucking save.

The Pens would get a brief powerplay opportunity a bit later but Malkin would take his obligatory lazy penalty of the playoffs (202nd penalty minute in his 150th playoff game) to negate the chance. The Flyers would get a brief powerplay at the conclusion of the 4 on 4 play but the Pens penalty killers were standing their ground. At the end of the penalty the puck came to Evgeni Malkin, fresh out of the box and kids, this is one way to make up for a bad penalty

This is our 190th recap and I don’t have the words to describe the magnificence of this play by Malkin. Just wow. I’m sorry Geno, you deserve more but this is all I can offer. Shane Gostisbehere, welcome to the Evgeni Malkin show.

The Flyers would get one more powerplay chance off of a very questionable slashing call on Malkin and this time they would have the full 2 minutes with the man advantage but again the Pens PK was up to the task.

Time would eventually tick down in the period, I know Mr. Rossi said it wasn’t about flipping a switch but I think what we all witnessed was him being wrong as the Penguins clearly flipped the switch to “playoff mode” to start this game.

The Flyers got off to a better start in the second compared to the first and they even had the advantage in shots for the first 5 minutes or so in the period. Matt Murray had to make a few big saves and Pierre McGuire was wanking it to the Flyers faceoff percentage saying it was an “area of concern” for the Pens…

During the pressure the Flyers got this excellent chance that Murray was all over.

The Flyers would eventually kill their momentum when Couturier continued his strong performance by taking a tripping penalty in the neutral zone. The Pens first unit had one or two looks but overall just kind of passed the puck around and it looked like the Flyers would kill it off. Then the second unit took over and put together some good cycling as Sheary came out from behind the net and gave the puck to the point just to get it back quickly, he then looked up and found Brassard and it took Brassard all of 0.02 seconds to make anyone complaining about losing Reaves for him look very stupid.

What a big time pass by Brassard to give Guentzel the easiest goal he will score in the playoffs. This was Brassards 56th playoff point in just his 79th career playoff game. Jake Guentzel scoring in the playoffs, who knew?

The fans were barely back in their seats before Guentzel had the puck again, this time he was the one circling behind the net and when he looked up he found and promptly fed the biscuit to Dumoulin. Dumo being the smart man that he is put a shot in Crosby’s direction and… well:

At first it looked like a deflection and I was all like “nice hands, Sid.” Then I realized that this son of a bitch not considered the best or the second best player in the league anymore by TSN took a backhanded swing at this puck in midair to hit a line drive into the net.

Just an unbelievable goal by the Captain who continues to put together the best and most consistent play of his career. I’ll go on record and say it, because it is true. What we’ve seen out of Crosby over the last 4 or so weeks have been nothing short of a generational talent continuing to separate himself from the rest.

The Flyers would start getting a bit antsy and took a few penalties but the Penguins couldn’t cash in. At one point Evgeni Malkin nearly impregnated everyone in the arena with a disgusting display of skill where he undressed three Flyers and hit the post… somebody is ready for his chance at history.What a piece of shit Russian, all that skill and not sharing, serves him right to hit the post.

Murray made a few more saves later in the period but nothing too alarming and this puppy was heading to the third with the home team holding a 5 goal lead.

21-17 faceoff advantage sure has me sweating bullets, Pierre.

The first 5 minutes of the period may or may not have happened. Then Letang was called for a “the Flyers are losing and need some help” penalty after “slashing” a guy.

The highlight of that Flyer’s powerplay was a 3 on 1 for the Penguins.

Following the conclusion of the penalty the Penguins got back into the offensive zone and just put a puck on net, gosh golly by George, what a plan

Not going to get much easier for Crosby on this one, hell Sheary may have knocked this one in WHILE standing up. Have to love that fire first mentality by Schultz as he receives the pass at the top of the zone. If you pause the gif while Guentzel has the puck.. 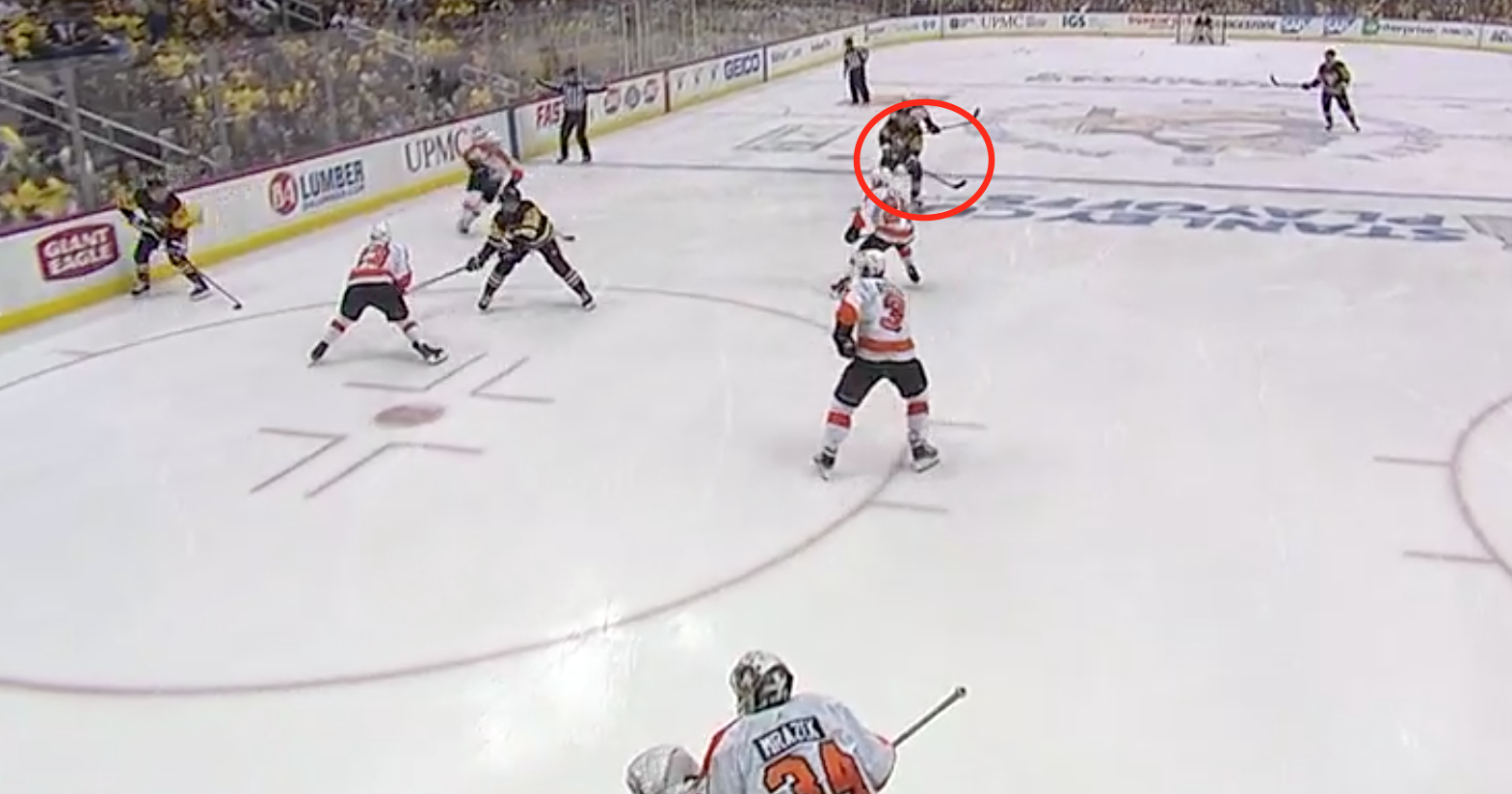 The entire Flyers defense is to the left of the dot and watching the puck while Crosby is heading right for the post. As soon as Guentzel drops the puck to Schultz the Flyers spread out but by that point Sid is already behind the defense because you know, he’s not someone you should be continuously tracking: 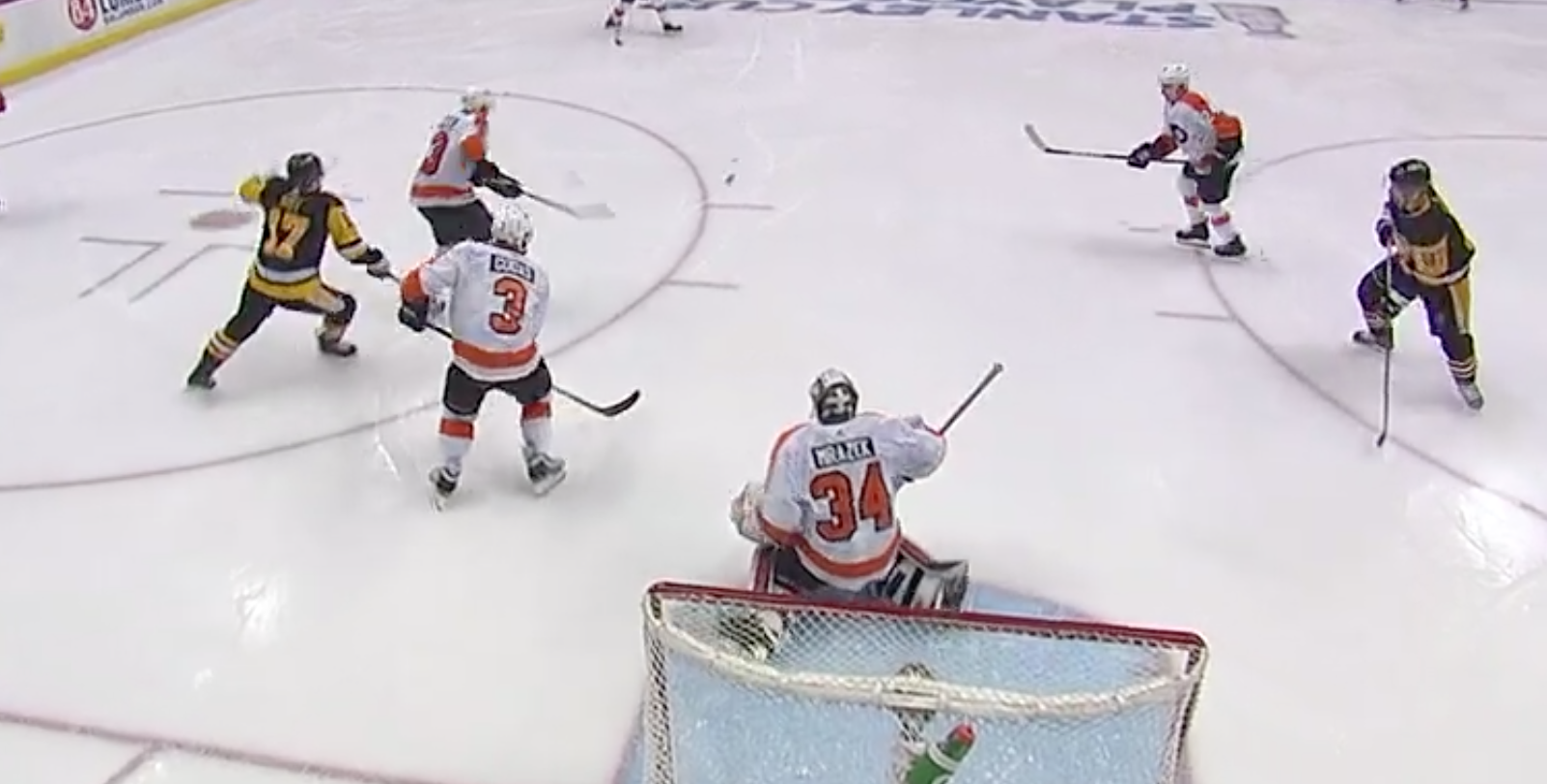 The Flyers responded to this back breaking goal by putting a shot or two on Murray which were easily turned away. The puck then went back to the Pittsburgh zone and ended up on Dumoulin’s blade again, and he threw it to Crosby again because if at first you do succeed, do it again.

Pretty decent effort in this one by Sid as he once again attempts to get the torch back from Claude Giroux. What a performance by the Pens leaders in this one as Malkin was dangling everywhere while teabagging the defense and Sid was burying 3 goals on 4 shots.

The Flyers would receive their 4th powerplay of the night with like 6 minutes left or something, it was about as eventful as The United Center will be this post season.

Much like the rest of the game the Flyers couldn’t get anything going in the remaining 9 minute and when they did Matt Murray was there to delete a lot of pretyped Facebook comments. A few days ago Matt Murray gave an interview and said the following, “Obviously it’s no fun to have people doubt you, but at the end of the day, you can go ahead and doubt me, you can do whatever the hell you want, it really doesn’t impact me.” Tonight he was busy completing his third consecutive Stanley Cup playoff shutout.

The Flyers just wanted one goal to save some face, but that isn’t how the playoffs work honey boo boo. 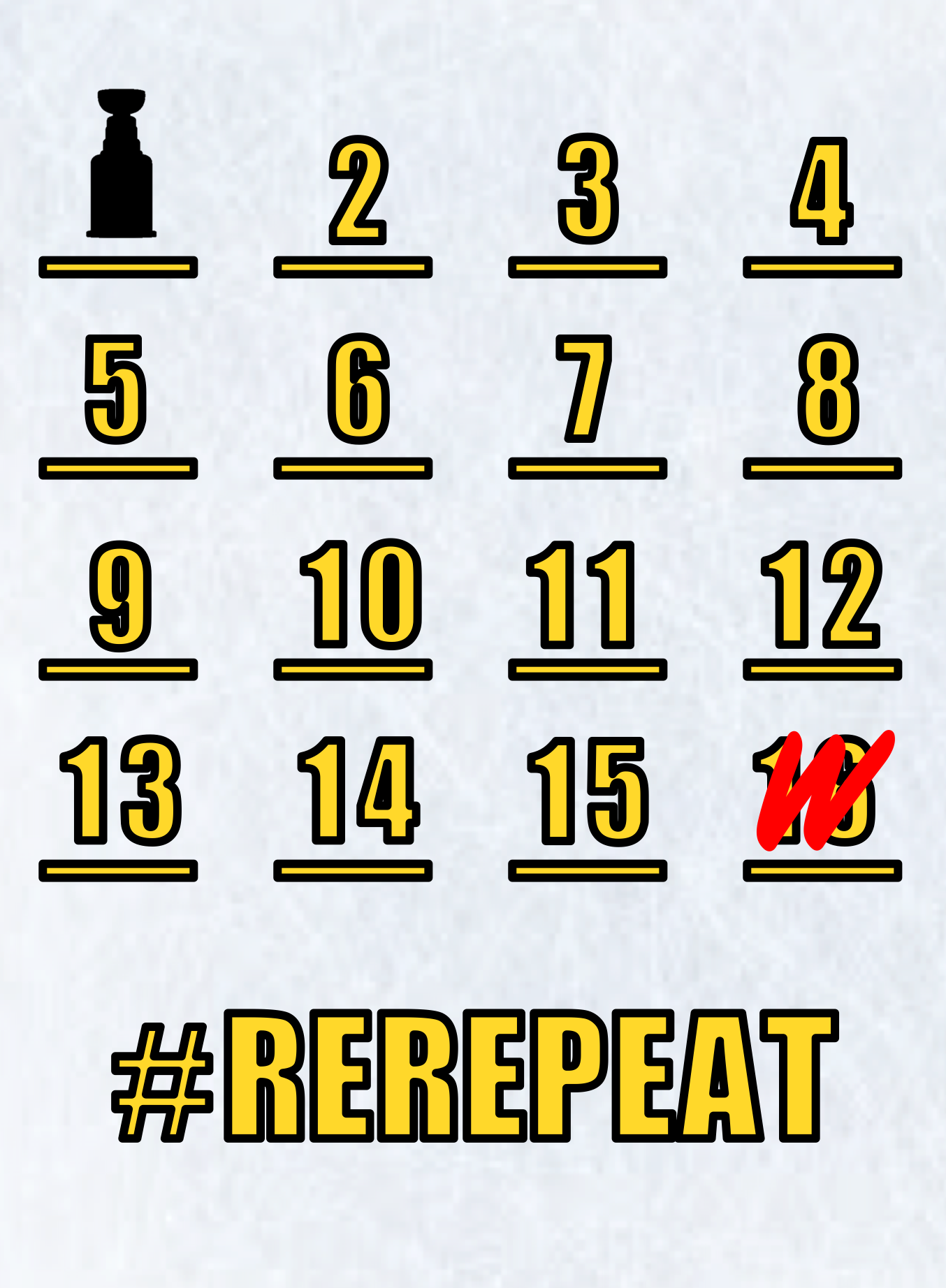