This post is drier than your mom’s Fun Dip.

Its not particularly easy to pull suspension stats.  Its almost like the league doesn’t want fans to pay attention to who gets suspended, and why.  The Department of Player Safety (DoPS – DoPes) announces suspensions via twitter, and in the Shanahan era it released explanatory video.  Here is a chart which shows suspensions by month for the last three seasons, with April split into regular season and playoffs. 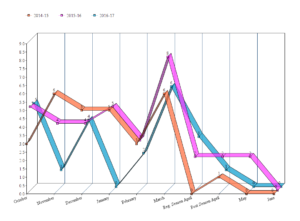 March is a doozy when it comes to doling out supplemental discipline. The league must be getting its licks in before the playoffs. But, other than the 15-16 season, the playoffs have been largely devoid of suspensions. Of the six total playoff suspensions in the last three years, four came in 15-16.  The 15-16 season was the year that saw both Orpik and Letang with a mouthful of nachos. Those were the only two suspensions in May that year.  Letang suspended one game.

I have a lot to say about DoPS not all of which can be crammed on to this one dry post, but its clear, to me at least, that suspensions during the playoffs are not a likely event.

But hey, maybe its because the players play within the rules.  Here’s a look at minor and major penalties per game, by month, for the 2016-17 season. 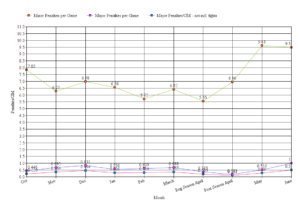 For example: January saw 1285 total minors in 196 games played for an average Minor penalty/GP of 6.56

First, it may seem like a lot of minors, but keep in mind that’s per game, not per team. So a six would mean each team was called for 3 minors (or 6-0, 5-1, 4-2). I seem to recall Paul creaming his britches over the Pens Devils(?) game last season where there were no penalties.

Second, fighting is a major.  But to my mind, its not a ‘major’ major.  Fights account for about half of the major penalties called in the league.  Of the 795 regular season majors last year, 372 of them were fights.  The fights are separated out of the chart above to show non-fighting majors.  Cool fight stats here.

The broad takeaway is that major, minor, and fighting penalties are about the same in every month of the year.  This year even saw an uptick in minors in the playoffs.  Though sample size comes into play when comparing 1230 regular season games with just 89 post season games.  If the amount if illegal play is the same, it stands to reason that suspensions would also be the same.  But we’re talking about the NHL.

That was a two game suspension for Marchand. The call was spearing.  It was in the waning games of the regular season.

Less than two weeks later on April 19, 2017 DrySideHole did this in the playoffs.  Watch the play in the corner.

Draisaitl was fined $2,569.00 for spearing, no suspension.  In fact I wonder whether he would have been fined at all if not for the recency of the Marchand suspension.  (Cue the Crosby nut shot which is nearly identical to the above and didn’t even result in a penalty).

The league is the teams, and teams do not want their players out of the lineup in the playoffs when it matters most. Its not a surprise, but its also one of the reasons Bettman gets boo’ed by every fan base on the continent.