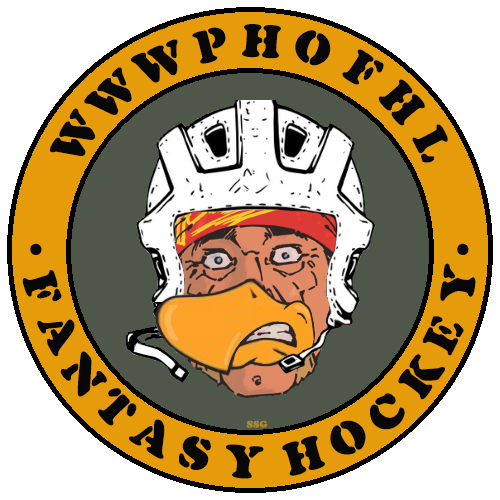 THE! Inaugural 2017-2018 WWW.Pens.Hockey Official Fantasy Hockey League regular season comes to an end this weekend, with Round 1 of the playoffs beginning on Monday, March 12th, 2018.

This is the first-ever NHL fantasy league attempted by many of its members.  Suffice to say, there is a learning curve to this game that sleu-footed nearly every GM.  The regular season has been on par with a ride on the original Steel Phantom.  Some GM’s missed the draft, some didn’t prepare for the draft, star players were accidentally dropped, good players from hated NHL teams were ignored for weeks… and those are only the follies that I can remember off the top of my head right now.  It’s been a fun ride so far, and I hope we can build on it next year.  I suspect that new rules and strategies will be explored if we are to see a 2nd season out of this promising and exciting league.

Please stay tuned for a short commercial break and video introduction.  There is a neat playlist waiting under this paragraph, so just click play, dim the lights, and sip your coffee.  “You can put your hands behind your head, put your feet up, and just watch these guys do it.”   We’ll be right back.

It’s a Hockey Night in Wexford!

Hello again everybody, and welcome back to fantasy hockey.  Allow me to introduce myself:  Around here, I go by MoonSloth, but you can call me Moonson or Moonie or Moonman or Moonpie (the banana kind).  I will be your guest host here today, and I hope you enjoy what I’ve compiled for your reading/listening/viewing entertainment.  An exaggerated caricature of Paul Steigerwald will be around in just a moment, and we’ll have a chat with our own Finn Bonzalez from Bonzcast podcast fame later on.  We’d first like to thank commissioner Andy Peppers for putting the league together, as none of this would be possible without his endeavors.

Now, let’s take a look at what’s coming up, shall we?  With so many of the NHL’s teams sitting on the outside of the playoff picture at this time, will the new fantasy stars of 2017-2018 continue to shine, or will we see new trends in scoring due to injuries, line-changes, lack of effort, and/or dik-rips?  Up ahead, I will make no attempts to properly answer any of these questions.  I’m not an expert.  What I’m really offering is an inside look at our collective attempts to be GM for a fake NHL team.  I got better connections than Budmoonshine.

Here’s an update from the ghost of Paul to take us through each team and their owners.

On second thought, we’re gonna give Paul a couple Phil-pills and a few minutes to rest before looking further into the individual teams.  Let’s take a look at the league rules and regulations.  There are 12 WWWPHOFHL teams in total, divided into Eastern & Western Conferences.  Each matchup lasts one week with two teams going head-to-head for most points.

The waiver wire was especially useful for most teams.  As mentioned before, the draft didn’t go so hot for a lot of GM’s.  I’m not going to count, but I guestimate that over half of currently-rostered players were Free Agents after the draft.  Okay, fine… I went back and Grover’d the numbers.  In total, for all teams combined, 111 players were pickups from free agency and 103 were drafted.  *Owen Wilson Wow!*  There were only two trades during the entire season.  One of them only happened because a star player was accidentally dropped to free agency, spinning the unnamed GM into a frenzy of phone-calls and e-males until he finally got his man back. 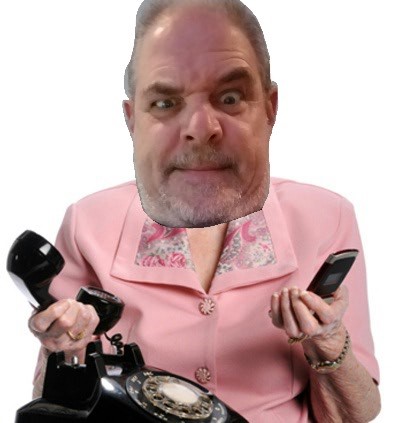 Meanwhile, our entire staff is searching every nook and cranny for signs of Paul right now.  We left him on a couch and someone was supposed to be watching him.  We’ll let you know as soon as we hear any news.  There’s a free Grim Reaver t-shirt here for anyone with information.  During the interval, let’s check in with Finn Bonzalez of the Bonzcast.  Scandalous rumors are in the air tonight, Finn.  Can you fill erreybody in on what all the talk is about?

Wow.  All I can say is wow.  I couldn’t have said any of that better myself.  Thank you, Mr. Bonzalez, for giving us ALL something to think about.  You keep your ears to the ground and we’ll be right here when you find more juicy details.  What a journalist, that guy.  Wow.  Zoop on, my friend.  👉😎👉

You must be wondering at this moment… “Who is Stavros Stamos?” “Why is someone talking about my mom’s 5-hole again?” “Who the HECK is Ron Mexico, and why should I care anyway?” I’m glad that you are asking yourself these pressing questions because I’ve finally received word that Paul is safe:  He’s rather twisted on painkillers and bourbon, but apparently he’s been going door-to-door in the dressing room area, gathering interviews with every GM he can find. I want to personally thank everyone who participated. You’ve given our little guy new purpose in retirement.

Ladies and gentleman, I can’t account for what may be seen as you scroll dahn. Keep in mind that these exclusive one-on-one’s are being brought to you by the guy who joked about Hobey Baker’s tragic and untimely death on live television. Without further adieu… 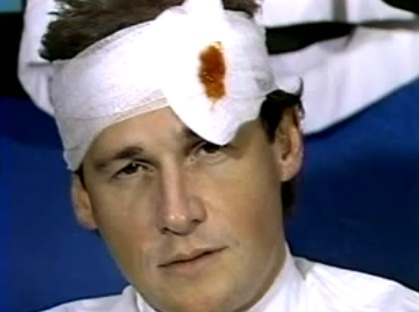 Fun fact for all the kids at home:  That was me inside the mascot suit.  No one believes me!  The script actually called for Van Damme to wear the suit while I kicked him around and through the meat slicer.  I’m taller, so I should wear the suit.  Jean was such a baby about the whole situation.  What a diva!  I won the fight, but then the hack director cut it all up.  I didn’t like that idea and said no way.   My lawyers are still working on the situation… You don’t make any sense!

Anyway, all this talk about the sandwiches I made with Jeanny boy’s head is makin’ me hungry!  Woo!  How hungry are you, Paul?  I’m so hungry that I made a list of questions for each and every WWWPHOFHL team!  Nothin’ satisfies a guy’s hunger like a good, old-fashioned interview.  Speaking of interviews, why the hell does Potash get to keep his job while I’m stuck wiping down the exercise equipment?  Dammit.  I wanna wear the makeup…  I wanna dress up at intermission.  In fact, I sometimes do these things at home!  I’m sorry, Iceburg.  I know these guys are better.   I promise I won’t make jokes anymore.  Just, please, take me back 🙁

Here’s your stupid questions, Moonie.  I gave the same list to every team.

1. What’s your favorite game-time food?  I like ketchup sandwiches.

2. I love alcohol…  Too much sometimes!  What’s your preferred alcoholic drink?

3. Who is your favorite player on your team and why?

4. What could/would you have done differently this fantasy season? (if anything)

5. How did you decide on your team name?

6. Rate your team confidence-level now, and for when you drafted your team. 1-10 (2 answers)

8. Wrap it up!  Is there anything else you’d like to add?

“Well, I don’t miss you either!  Mike Lange wishes he was HALF the man that I was… am.  I carried him all those years.”

“He’s talking to the microphone like I’m not even here.  Is that salad I see in your room?  Can I toss it?”

“EVVVGEEENNNIII MAAALLLKKIINNN” can be heard in a sheepish yelp as Paul staggers down the hallway, fearing for his life.

“What a nice fella.  He fainted right into my crotch.  That was so awesome, did you get it on tape?  Yeah, gimme a copy like you usually do.”

“I’m crazy about that accent.  Are you from Houston, by chance?  No, I didn’t read that on your door.  Say, have you seen my biceps?”

Thanks Steigy, it’s been a pleasure.

“You nailed exactly what I was striving for all this time!  Thank you so much, chill1495.  It’s so humbling to have fans like you.  Can you sign this petition to get me back on the air?  Oh, and Moonie, isn’t Patrick Kane on your team?  Ouch.”

“Paul misses you too, buddy.  Do you mind signing this petition to get me back onto the broadcast team?  I just got my first signature!  Oh, and I can go tell chill1495 what you just said because I wanna see if he’ll sign this thing again.  Be right back!”

As for you, Paul, just retire already. You’re boring AF during the intermissions. Go join your brother in obscurity.

“They call me chocolate, baby.  Maybe if you can’t handle me at my worst, then you don’t deserve me at my best!  I always say,
don’t be vanilla.  Sign this paper if you think Mears sucks!”

“Well, to be honest, I’m not a fan of how you succinctly, yet thoroughly recap games with all your funny jokes and cool gifs.  I totally don’t read them waiting for my name to be mentioned.  Is this about the Hobey Baker thing?  Bob loved that joke.  It was just a joke!  We used to tell each other the greatest stories on the air during play.  That’s why I mistook players numbers!  Bob gets me all confused.  It’s his fault that this happened.  I gotta call mom.”

“I can feel spanish rap music bumping through the walls.  Smells like schwaggy marijuana and tequila in the hallway, Moonie… The damn door’s locked.  **knock, knock**  We have no idea who this guy even is…  He’s a real party-animal, though.  I can say that for sure!  **knocks louder**  I realllly want something else to drink, but I can’t get in!”

That… was surprisingly interesting and insightful, Paul.  Maybe we should stop it there.  Thanks again to all the GM’s for participating.  Now that we know a little more about each team, we can finally look at the standings.  One weekend away from fantasy playoff hockey.  All stats are current, but it may be possible to see some shakeups before the playoffs begin on Monday.  You do the math.  One team is in bold because I don’t feel like changing text with mspaint anymore. 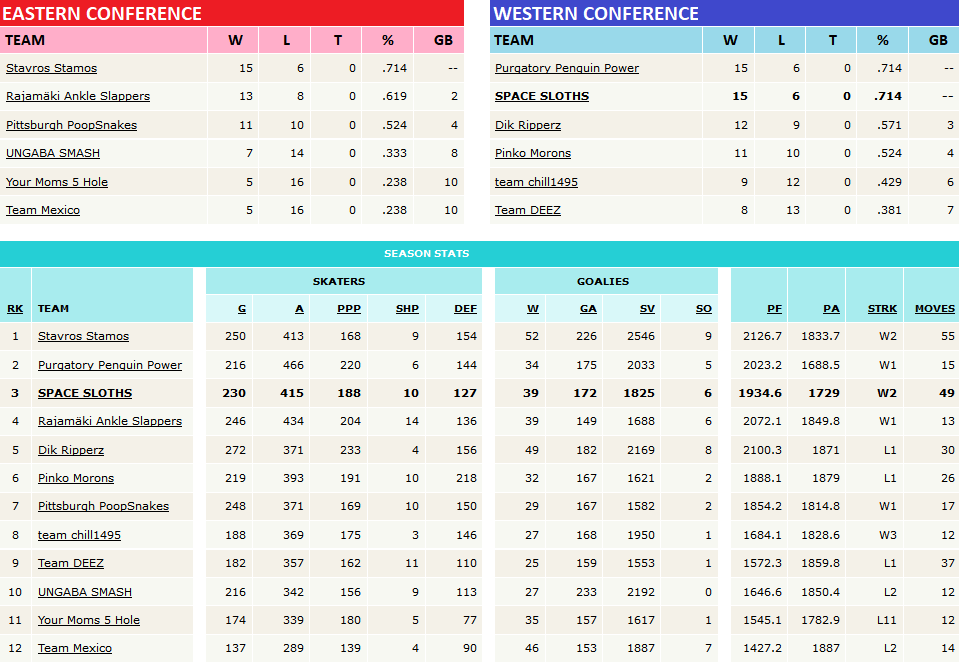