With nearly a week of training camp complete almost everyone reading this has at least been able to dip their toes into the hockey is back pool and damn does the water feel perfect. If you are a regular reader of this blog you’ve probably realized that we haven’t had regular gameday and recaps for preseason games yet, and that’s because it is silly. Instead I thought doing weekly recaps of the things we’ve seen, read and heard about the happenings of training camp would be better. Here are the 5ish thoughts, opinions and observations I have made so far.

In Tuesdays tilt with Buffalo Casey DeSmith looked more like a veteran than a guy with 14 NHL games under his belt. DeSmith faced 29 shots including many grade A scoring chances as Buffalo iced an NHL roster against Olli Maatta, despite being overpowered DeSmith was cool and collected while turning away 26 of them. Not to be outdone Tristan Jarry took over the crease last night against Detroit and woo buddy did he ever look as sharp as the cheddar cheese the character on his helmet so desperately desires. Jarry was not only positionally sound and square to the shooter but he also showed his athletic ability on numerous occassions:

Tristan Jarry flashes the leather to keep the Red Wings off the board with the man-advantage. pic.twitter.com/h0v2UORCEi

Jarry gets across with his blocker to keep the game tied 1-1. pic.twitter.com/2CGjKB2HhH

Jarry finished the game with 39 saves on 44 shots and looked very comfortable in his position. Many will say Jarry should be the backup, and I agree, however him being waiver exempt and DeSmith not is a huge factor in that decision and it wouldn’t surprise me to see DeSmith in Pittsburgh come October.

Jack Johnson made his Penguins debut last night and as always I approached it with a clean set of glasses. What I first noticed was Johnson’s size 😉 … but seriously, a 225 pound 6’1″ defender looks like Andre the Giant compared to most Penguin players. I mentioned his size first because that is the only thing that won’t change from my game one observations and of course it is a small sample size but there were still many encouraging aspects to his game. When Johnson touches the puck he immediately puts his head up to observe his settings, he also has a very strong first move with the puck to free up some space for himself. On at least 5 occasions he made a power move in the defensive zone which put the puck on his forehand and set up a nice breakout pass that went incomplete. Now this incompletion might raise some eyebrows but since the intended receiver was white he won’t get much criticism from Mark Madden. I am excited to see what this breakout pass looks like when Johnson is sending it to a forward line that knows what they’re doing. To go along with his strong skating and hands Johnson also has an absolute bomb from the point, something the Pens haven’t really had since possibly Gonchar(?). Unfortunately all of my observations were offensively based, however with Detroit getting 44 shots on goal and me not being able to recall anything imminent from his defensive game that is most likely a positive. He spent most of the game paired with Justin Schultz which I don’t know about. I also hate his jersey number, 73…. gross.

You are, of course. The expected NHL players are exempt from this list for obvious reasons though I will mention that Bryan Rust looked like a hungry wolf running through a herd of sheep.

Juuso Riikola has had an impressive camp so far and he continued to shine in his first two preseason games. The 24 year old free agent overseas offseason signing is most likely going to see some NHL time this year, I don’t know if he cracks the opening roster due to the team already carrying 7 defenders but I suspect we see him at some point. Defensive coach Jacques Martin had this to say following Riikola’s first game, “For his first game in North America, I thought he adjusted fairly well. For sure, it’s an adaptation. But I liked what I saw. I think he has good vision, he can move the puck, he skates well. I think it’s encouraging what we saw tonight.” Getting a month or two in the AHL wouldn’t be the worst thing for him as he adjusts to the North American style, but all things are looking good for this signing right now.
Adam Johnson has continued to improve in every camp and this one has been no exception. He had some noticeable chemistry with Daniel Sprong last night and was one of few players that stood out of the Pens forwards against Detroit. Coming off his first pro year in Wilkes-Barre where he scored 11 goals and 21 assists in 70 games I have high hopes for the other Johnsons continued development.
Teddy Blueger has been in the Penguins system for at least a decade and he continues to grow. Coming off a 21 goal season in the AHL the 24-year-old Blueger is looking more and more like a late January call up, considering he plays both LW and C I have no doubts he will make his NHL debut at some point this season.

4. Who is leaving you wanting more?

Your wife will have a different answer to this.
Daniel Sprong has been in the spotlight all camp and while he has received praise from the coaches during the training days he hasn’t really blown any pants off in game play. I know that Sprong has worked hard on adjusting his game as requested but I was hoping that he would look a little more like Bryan Rust (who had an obvious step on the other forwards) last night instead of everyone else. Again, this is a small sample size and for a young man who has had his confidence shaken not stirred over the last three years I am certainly not throwing in the towel yet, I’m just cheering for this kid so much I am ready to see him reach the level we want. There was a noticeable improvement between the first game and the second game and I have a feeling Sprong is going to fit in just fine.
Dominik Simon fit in really well with the group of forwards the Penguins iced last night. That is not a compliment for someone that is most likely getting shifts on the top line this year. There was a sequence when he was completely over powered by Anthony Mantha in the defensive zone and while I’m not going to blame Simon for having a 175 pound to 225 pound disadvantage in that battle I am going to blame him for not finding a way to stand his ground. We’ve seen many players with small frames find creative ways to be strong on the puck (coughCrosbycough) and Simon just bent over and took it.
Depth. If anything last night showed us that the Penguins are not very deep in forward depth. The defensive depth is not quite as troubling as new draft pick Calen Addison put together a nice game last night. The forwards though… even with a “win now” mindset I have a feeling GMJR won’t be trading away many of his middle round picks this year as he continues to draft similarly to this year and restock that pantry.
J.S. Dea played last night in case you didn’t notice which I know you didn’t.

With two days off before the next preseason game on Saturday and the one week mark coming up tomorrow I would expect the first round of cuts get made as the roster starts to slim down. With the game Saturday being the first home game it wouldn’t be too shocking to see a few more NHLers in the lineup either. It could also be the return of Mike Sullivan behind the bench following the loss of his father. I’m willing to bet that the most surprising cut made this week is the paper cut one of you will receive… now which one of yinz will it be……. 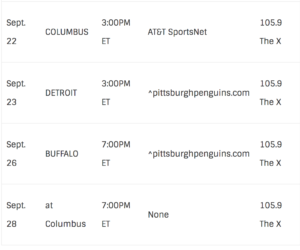 The 9/23 and 9/26 games will be streamed on pittsburghpenguins.com to those within the ATTSN Pittsburgh viewing area only, so either move or get a VPN. The final preseason game will not be on television in any form.

So far the Penguins have used Olli Maatta to lose by 1 to Buffalo’s starting lineup and Bryan Rust to lose by 1 to Detroit’s starting NHL goalie, my worry is negative 69. The most encouraging sign is that the team looks to be on the same page with their breakouts and transition play and the pro players look hungry out there. I don’t know if it is because we are coming off of a long offseason that allowed some reset, or if it is just me, or if it is the downward spiral of the other Pittsburgh sports, but this season has a type of optimism and excitement about it that somehow is higher than last year.

Thanks for reading fam! We are getting closer. PS, we have a few new items in the store! Also, fantasy hockey draft is coming up on the last weekend of September, hit up Andy for details.