(WARNING: These are only the opinions of one human man who sort of pretends to be a doge on the internet.
He did absolutely NO RESEARCH. In fact, he limited himself to the Penguin’s NHL.com roster page stats only. Everything else he just made up.)

Ah yes, preseason is upon us. The smell of Zamboni fumes are in the air… unless your rink has converted to a natural gas unit, then there’s really nothing left to cover the onion breath of the dude behind you with a whole tray of “animal style” hawt dogs.

Regardless, I figured there would be no better way to kick off “the-season-before-the-season” than to go through the current roster and write a brief statement about my personal beliefs and/or expectations for that player in the upcoming year.

He’s back. His face is… connected to… his face. And he’s got a chip on Tom Wilson’s shoulder. Or something…

Look, I expect him to do some good stuff, fill in where necessary, and then get another major injury because he wasn’t able to avoid another questionable hit dues to his slightly-behind-the-curve positional awareness.

“Blueger, I hardly know’er!”  Seriously, that’s all I got…

He played his first full season in like forever last year, right? I believe his confidence and thirst for many victories is as close to an all-time high as it ever has been, other than the time it WAS at an all-time high… which very well could be now.

“Dad” was born in 1976, the 3rd most ‘Murican year of all time, and in the most Canadian U.S. state. So he’s basically the Dale Earnhardt of hockey, except HE’S STILL ALIVE. Yeah, I know that was cruel and also makes no sense, but that’s also a fitting way to describe Cullen. He left for one year (?) and tore his kids away from the team they loved, only to bring them RIGHT BACK. What a dad thing to do. I think this whole thing was basically just him frkin with his kids. Not like that SSG… jebus…

I expect him to help the bottom 6 DO THEIR DANG JOBS. Also, he will have one ridiculously sick goal during the second half of the year.

Dea is one of those guys who I feel like has been in the Pens development system forever, but that can’t be possible because he is TEN WHOLE YEARS younger than me.

That’s it, he has yet to cement a place in my braimb yet.

Look, I’m not gonna say the only reason he’s on the roster right now is that his dad is in the mob… BUT, I’m also not NOT gonna say it. So… yeah… you work that out on your own time.

I expect him to have a slow start, and then help carry the team through some lean months maybe mid-year or in the spring, maybe after a couple injuries pile up.

Bottom line, dude is a beast, and I would never have guessed that. SO SUE ME.

Possible trade bait, and definite lady bait, Hags has the chance to up his resale value if he isn’t traded mid-season. Hopefully the possibility of more consistent line pairings will allow him to do just that.

Jimmy Hayes is very tall.  Jimmy doan score much at all.
Will Jimmy even see the ice?  My guess is prolly once or twice.
😀

If I was stupid I would have started writing stuff about JACK Johnson. But I’m not… So THERE dad!

“Oh He of Many Hot Dogs” looks to literally be in the best shape of his life, and after dropping that “same ‘ol shit” comment about his summer, you can tell he’s just itching to get back on the ice and fire the… ugh… I can’t say it… blech… Ok… he’s ready to really SCORE SOME GOLAS!

Look for Phil to quietly have an all-star season and have NO ONE NOTICE AT ALL.

So, he’s Swedish, and not Hagelin, so out of respect for Finn Bonzalez I’m not going to talk about him. It’s not because I can’t remember anything about him, I most CERTAINLY can… I just can’t bear to make Finn hear any more about Swedish players and how… oop… see? I almost gave out a pertinent fact about “The Lindberg Baby”, but I caught myself in time! WHEW!  ;D

Geno is coming into his own.

Ok, ok, for serious though, he seems more comfortable in front of the camera and just in his own skin than at any other moment since slipping through Stalin… er… PUTIN’S clutched however many years ago that was. Like Sid, he’s maturing, but unlike Sid, his personality is also blossoming (sorry Sid, I get it).

I like this human man. He has at times shown flashes of greatness when used in the right scenarios. My guess is he’s all over the place until he has to step up big late in the season.

Also, for some reason, I bet he’s REALLY good at horse shoes.

Someone said he has IBS or something? I doan know… but he’ll serve the team well in the bottom 6.

What dirt does this young man have on Crosby? Did Sid finally pay him off? Only time will tell.

Honestly though, if he starts the regular season on Sid’s wing I will be kind of upset. I doan hate the guy, but with the options “WE” have, surely there’s a better place for him, right?

Supposably as dumb as people that say “supposably”, will Sprong finally overcome his mental deficiencies and SPRING his way into the top 6? My gut says no, but I also ate chicken enchilada soup for lunch, so it’s saying A LOT right now.

GUYS! WE CAN STILL USE WILSON MEMES FROM CAST AWAY! HOORAY!!!

Only way he can redeem himself, IMHO, is for him to drink FOUR Bud Lights at one time while celebrating a *redacted so superstitious peeps doan hunt me dahn* next June.

He wore this shirt this summer: 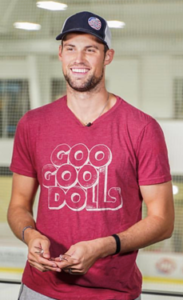 Mainly hoping he cracks the lineup at some point so I can make ET memes about him.

Hoo-doggy… this one is interesting. If he can just fins a partner to play a solid 18-20min of possession hockey with he will be worth errey penny. If not he might, and I emphasize MIGHT, be enough of a distraction to keep people from ripping Letang to shreds. Oh, and speaking of French beverage powders…

Letang was not as bad as he looked last at times last season. But I guess that’s the whole problem. At times he looks REAL BAD. And I imagine his teammates notice that, and they adjust their play subconsciously because of it. That is what I believe the real Letang conundrum to be. Even when he is playing statistically above-average hockey, he is not necessarily instilling confidence in his teammates.

This year he puts it all together though. I just have this feeling. Yes, it’s another one of my gut rumblings, but this one doan feel like enchiladas… this one feels like… faith?
( Can you tell I’m running out of steam? ;P )

Kid just plays. At some point his legs decided to work, or maybe he just got better positionally, but since then he’s arguably been the Pens most consistent D-man the last couple years. Weird right? Good on him though.

Either he hunches weird, or he is NOT 6’7”. Hopefully he can thrive in some sheltered minutes on the 3rd pairing. Or even maybe have a resurgence and find a new level to his game while playing his first full season with the Pens. Option 3 is nacho-city, population: Oilsak.

So new to the NHL they have yet to bother photoshopping a profile pic for him yet. Hopefully he develops into the soothing influence his name suggests, even if it ain’t spelt dah same 😀

An admirable 7th D option.   What?
Ok, name ONE Ruhwedel play (that was good) that stands out to you.
THAT’S WHAT I THOUGHT. Sometimes adequate is enough.

*can’t help but glance at Ung*

One of two things happens; One, he has a career season for offensive production and loses another front tooth, or… B, the wheels start to fall off and Rude-Weasle starts to look more than adequate.

Chris is the same age as my sister, and is NOT related to Mark of Double Dare fame. Also, they’re bringing Double Dare back. Has 90s nostalgia gotten out of hand? Hahahaha, just kidding, we all know it has.

His last name is, of course, Spanish for “Of what have you heard regarding the domestic abuse allegations against this young man to which he plead guilty?”  Sadly, this is what I think of first when his name comes up, and there’s not really anything much out there about the incident to put my mind at ease.

He did do community service and had to go through drug and alcohol counseling, so hopefully he learned some shiz and keeps his head on straight, which he seems to have been doing ever since the incident. When he’s playing hockey he’s pretty good, so let’s hope he sticks to that.

Have we ever talked about how unfortunate this dude’s name is? It’s just a terrible, horrible, no-good, very-bad name. His helmet though, is fly as hell. Well, it does KIND OF look like it was designed by a child, but in the best way possible. Oh, also from what I remember he is also a fine tender, and won’t mind having him in when MMX needs a rest.

Jebus looked a little less… “jebus-y” last season, but I wouldn’t worry about him too much. Yes, he has the bone structure of a character designed by Tim Burton, and yes, his high-glove side was suspect in the playoffs last season. But don’t think for a second think Murray hasn’t been working to strengthen his comically spindly frame to keep his glove hand a little higher this year. His calm and resolute demeanor reminds me a lot of Sid. Do I need to say anything else?

Ok, well. That was a thing. I hope you liked it, and if you didn’t, please don’t tell me. I’m a Leo and survive almost solely on the praise of others.  Now if you’ll excuse me, I need to go purchase a case of Bud Light aluminum bottles to start my crucial research into exactly how Dumo can drink 4 at once next summer. I’m open to ideas & research partners!