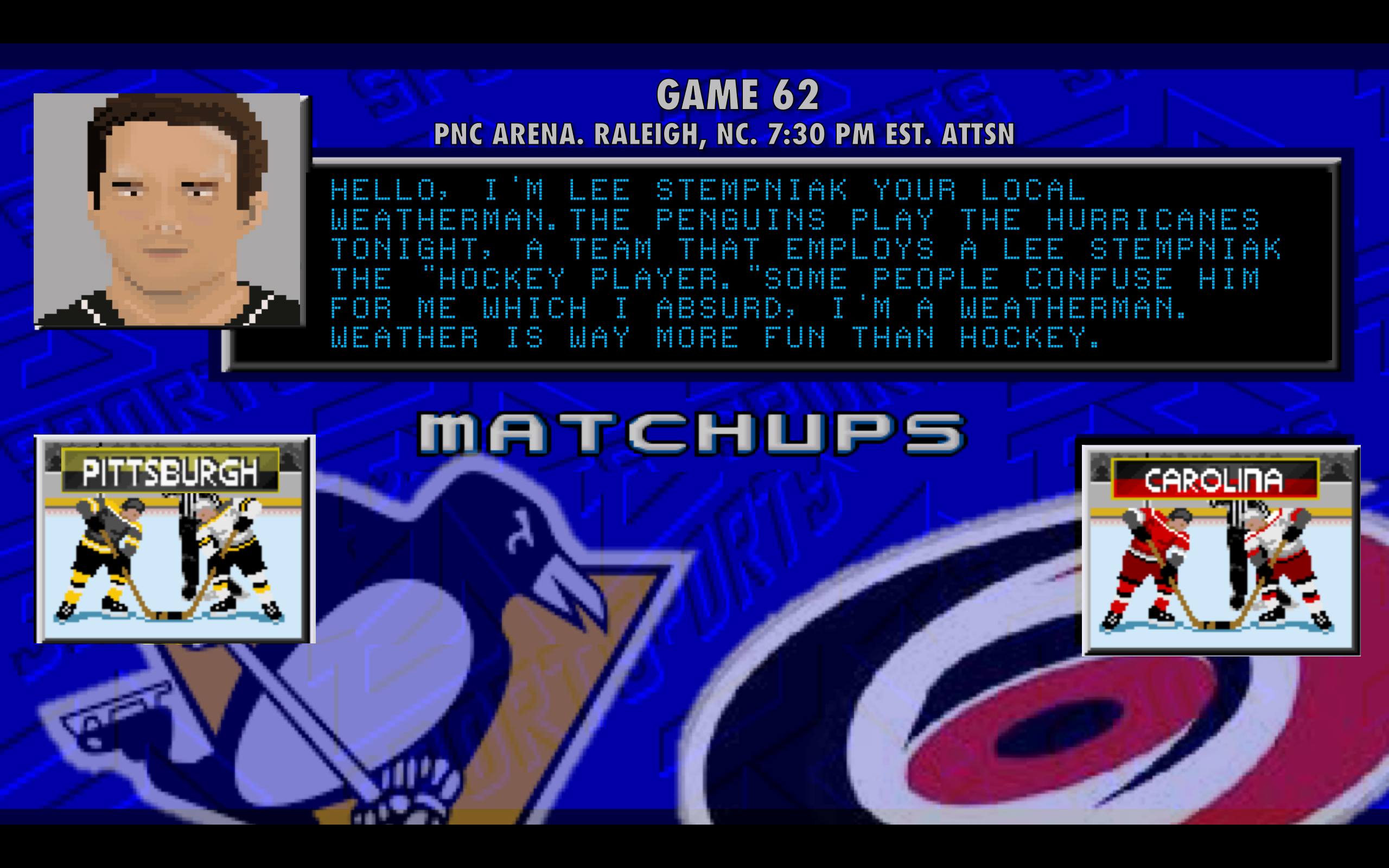 The professional hockey club of Pittsburgh is back in action tonight after a brief hiatus from their regularly scheduled activities due to all other hockey clubs needing to catch up in games played. For the first time since the second game of the season all Metropolitan teams that matter are standing on even ground, no longer can fanbases point to games in hand with their fantastic “what if” situations. No my friends, those days are over and it is a perfect time for it. 21 games remain in the regular season. Here is what the situation is as we head in to the final quarter of the 2017-18 NHL season: 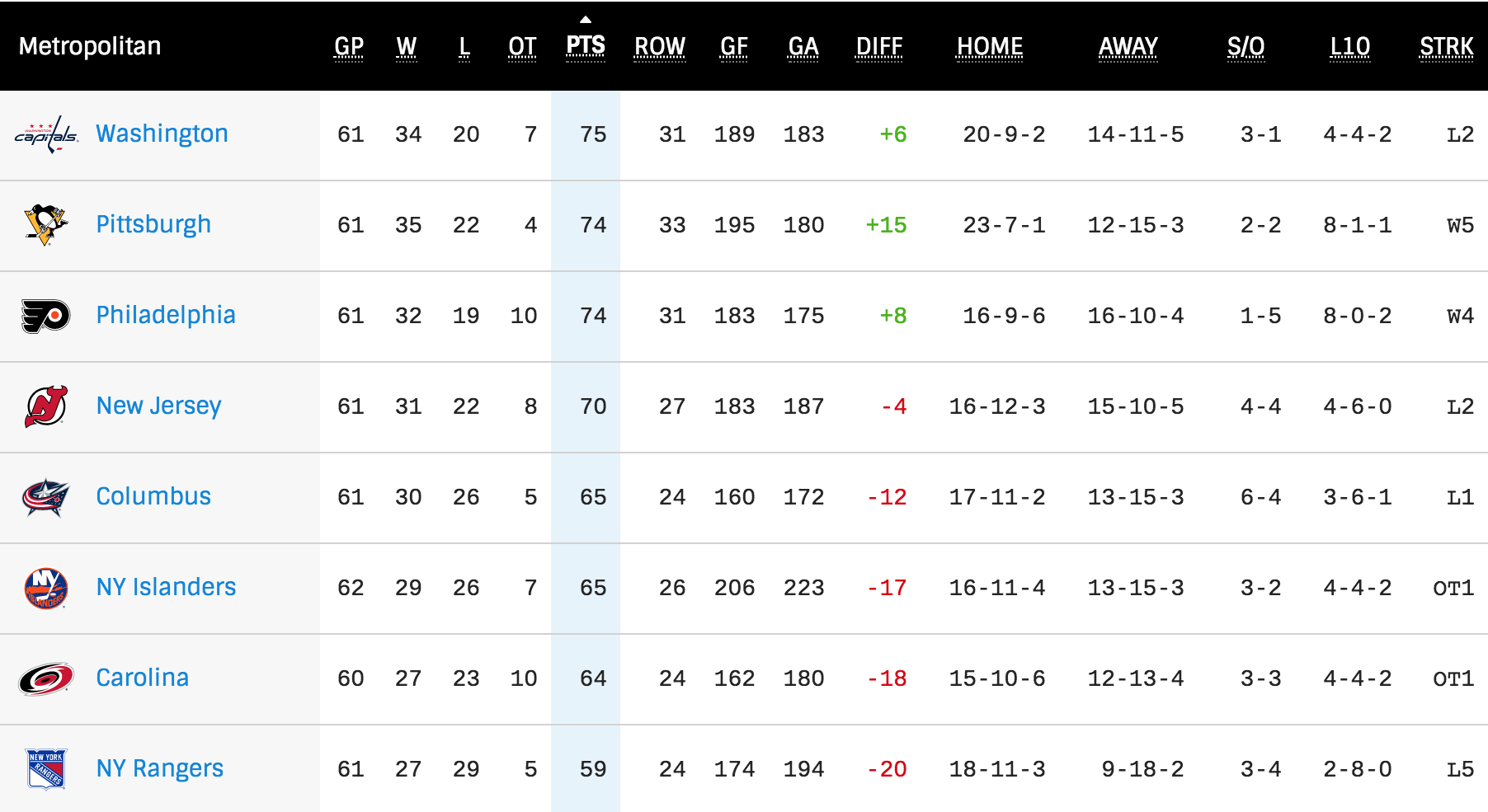 What started in January as a push for the Wild Card spot has suddenly shifted to the race for the division title. If the playoffs started today it would be Pens-Flyers and Caps-Devils in the first round. As you can see Carolina is just one win out of the final Wild Card position. The Penguins hold their divisional future in their own hands with 11 of the remaining 21 games coming against Metro teams, highlighted by two more meetings against both Philadelphia and New Jersey.

Tonight the Penguins play their first of those 11 division games as they faceoff against the team that everyone had as their “sleeper” pick to make the playoffs. The Hurricanes started the year off strong only to hit a pothole or two in December and early January but have recently started to right their ship, though their 4-4-2 pace in their last 10 doesn’t suggest they have all wheels turning yet. Carolina currently sits 7th in the Metro which sounds worse than it is considering they are only 1 point out of the final Wild Card spot in the East, yet another testament to how bad the bottom 5 Atlantic teams are. The Canes are using a bit of the Ottawa 2017 plan with 10 overtime losses aiding their points total on the season but hey, whatever works.

The biggest question mark during the offseason for Ron Francis was why he decided to resign Cam Ward instead of exposing him to the expansion draft after trading for Scott Darling. The answer is now obvious, because Francis correctly doubted Darlings ability to carry the franchise. As it happens to work out tonight is the 61st game for Carolina, and both goaltenders have started exactly 30 games so far. The tale of the tape:

It isn’t a hard decision if you are running the bench for the Hurricanes right now, if the team is serious about making a return to the playoffs this year they will be turning to the man that has been there with them before the rest of the way.

On special teams the Hurricanes continue to be anything but special as they currently have the 20th best powerplay and 18th best penalty kill in the league. Of course part of their special teams problem could be the fact that their powerplay shot heat map looks more dangerous without their top units center on the ice: 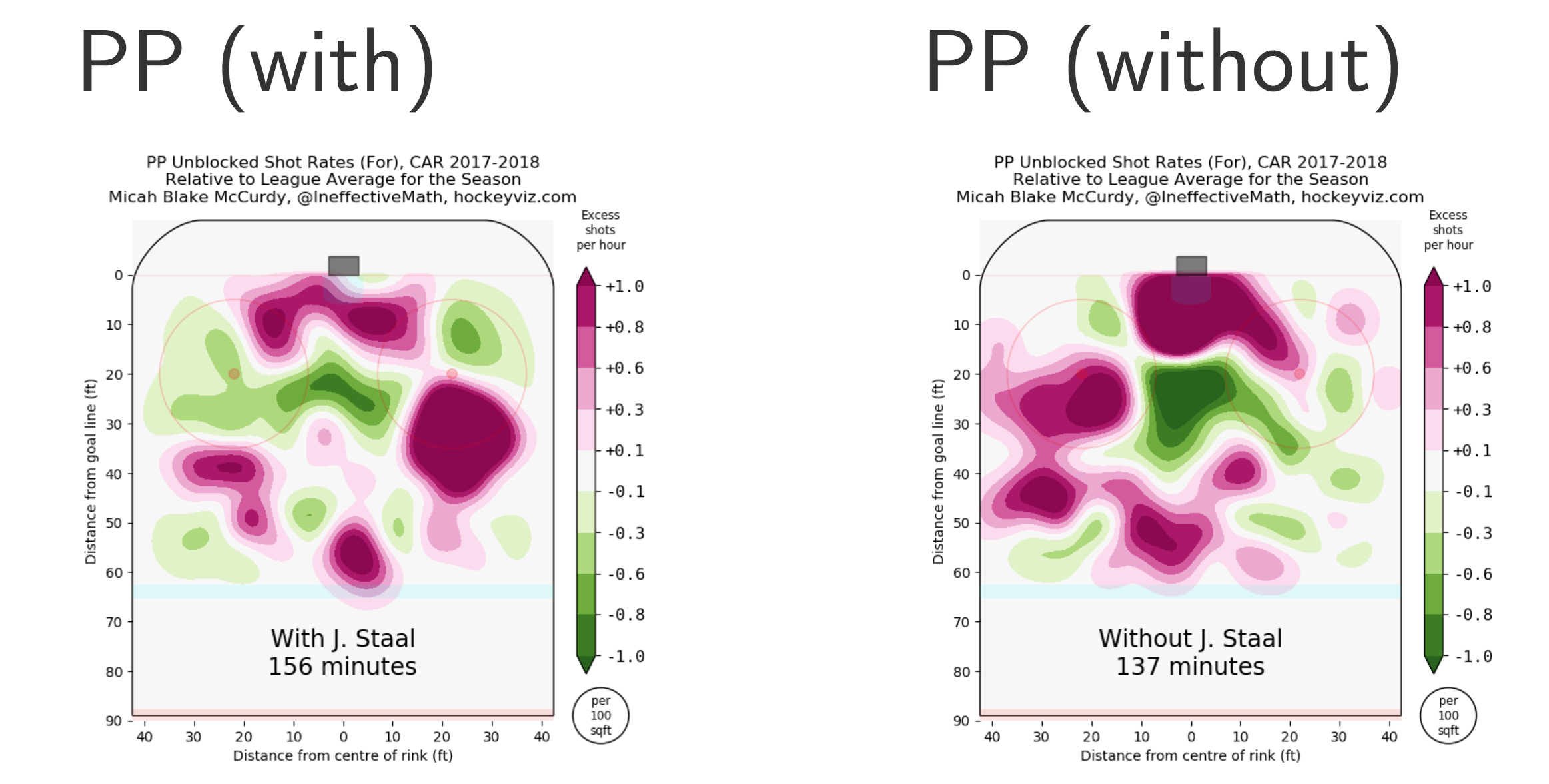 The good news for the Hurricanes is they only have to pay Jordan $6 million dollars for the next 5 seasons. The better news is the Staal they traded away has 54 goals in 141 games for the Wild, Jordan on the other hand has 56 goals since the start of the 2014 season (263 games). The four-time 20 goal scorer for the Penguins has only hit that number once (20 goals 2015-16) with the Hurricanes and is yet to reach the 50 point mark with the Canes. 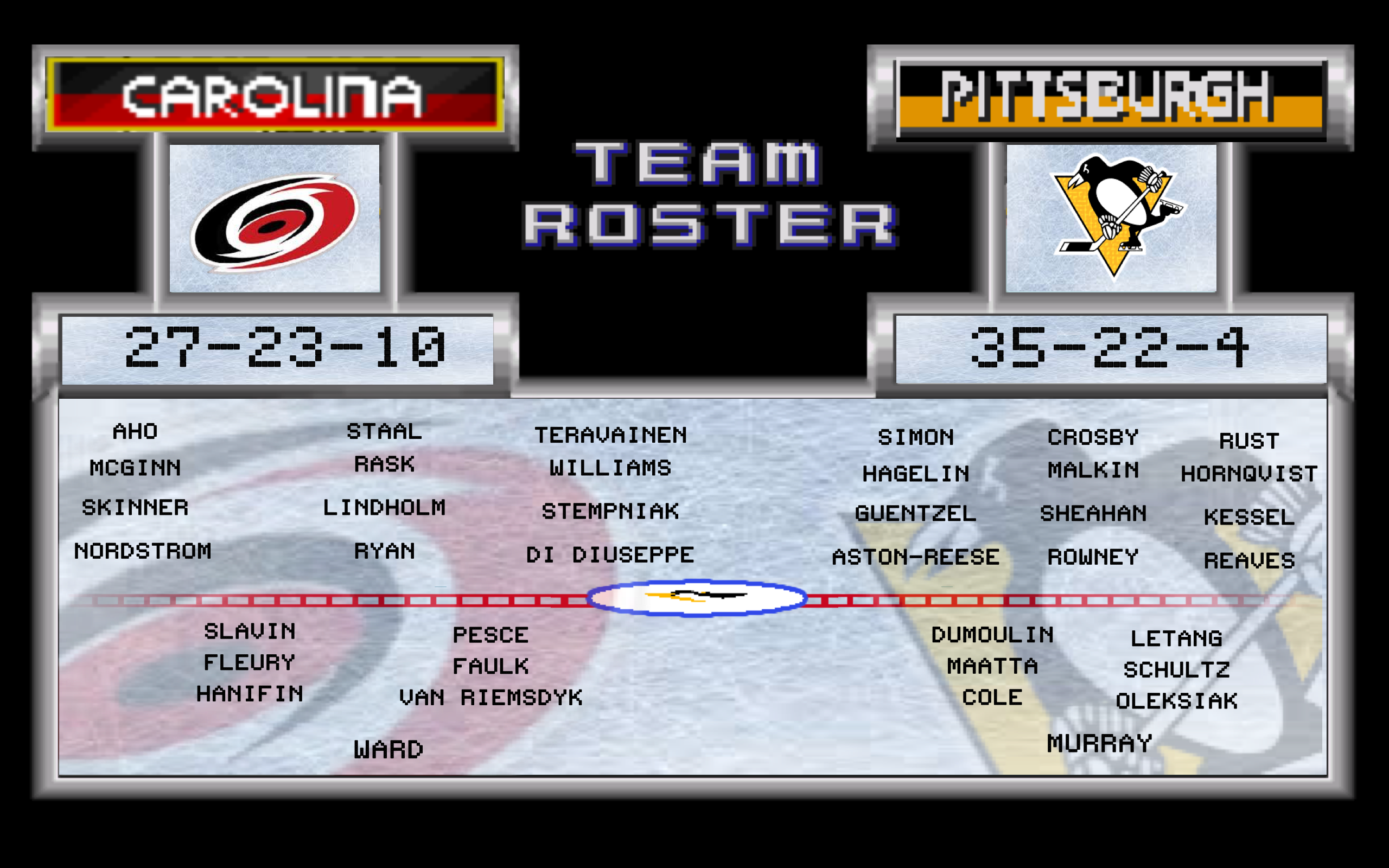 Patric Hornqvist returned to practice yesterday and after initially starting with a no contact jersey he switched it out for a regular jersey. All signs seem to point to a Hornqvist return and with that Sullivan shuffled up the lines a little bit in practice yesterday. Conor Sheary has gone from “the winger for Sid” to rotating shifts with Ryan Reaves, but at least he tries hard. Sullivan isn’t one to just practice with lines for the heck of it so I decided to put the lines straight from practice into the graphic, I also took into consideration the fact that Ryan Reaves is never scratched when making my decision to leave Sheary off the lineup. I can’t wait for the first “Sheary being held out of lineup tonight” trade rumor to surface, you heard it here first. I found it interesting that Sullivan was willing to break up the Malkin line by moving Rust to the top but I understand the thinking behind it, Geno is playing out of his mind and Rust could be the boost that puts Sid there too. Regardless it will always be a good day in the neighborhood when Phil Kessel is just sitting on the third line waiting to tea bag  the opponents.

It’s the last Friday before the trade deadline and everyone is assuming the Penguins will make some kind of deal. Like most I am leaning towards them making moves similar to last year where they get some insurance players in case of injury but nothing major which isn’t a horrible plan considering major additions (see: Shattenkirk) rarely pan out and minor ones (see: Hainsey, Streit) do. If you to read one of the most thorough pieces on what each team should be doing at the trade deadline we have you covered here.  Everything points to the Penguins making some trades this weekend and into Monday so tonight could be the last time you see certain players depending on how big the trade is. It is also important to remember two things during this trading season: first, don’t trust anyone without a blue checkmark even if they are “credentialed” Pittsburgh media and second, not every GM is going to be willing to help GMJR compete for a third in a row.

The Pens have won 5 in a row brother and the Hurricanes are hanging on by a thread. The boys could be on top of the Metro after this one, brother. There’s only one way to do it, brother. You got to go in there and get the W, brother. Now let’s go brother!