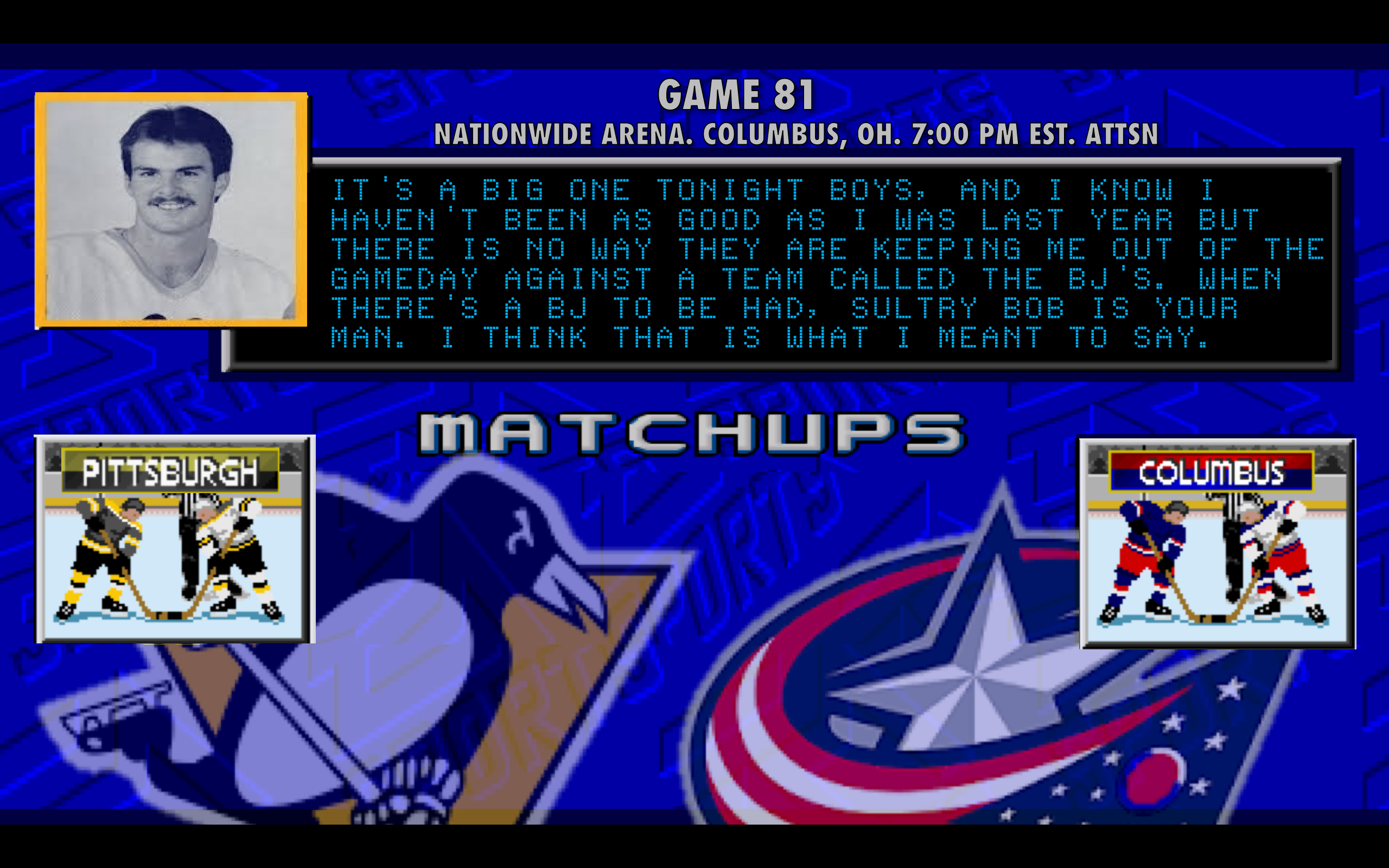 Alright pipsqueaks, dickteets, and you, this is one of those games where we don’t really need a gameday because everything writes itself. You know what is on the line tonight so we will just say it once so we’re all on the same page: with a regulation win tonight the Penguins are a little closer to clinching home-ice advantage in the first round of the playoffs. With a Penguins regulation loss and a Devils win over Toronto Pittsburgh will fall to the 1st Wild Card spot. If the Pens and Devils both win in regulation then Columbus falls to the Wild Card and the Devils jump up to 3rd in the Metro. Basically the 5 playoff bound Metro teams all play tonight and only the Pens and Columbus are going at it head to head, here are the current standings:

The Penguins punched their ticket to the playoffs last week and continued on to conclude the week by making sure they had no shot at winning the division. So what happens if the Pens lose tonight? It completely depends on the other games and if the loss is in regulation or not. There is a chance the Pens could fall into the Wild Card spot depending on the results of the other two games tonight which would put them against the Caps in the first round. Also not in the Penguins favor is the fact that this is the beginning of yet another back-to-back, the last of the season, as they take on Ottawa back in Pittsburgh tomorrow.

The Penguins completely control their destiny at this point and they know it, they just have to go out and show that they want to win. To summarize, I usually don’t make huge deals out of regular season games but considering how shitty the Pens have been in the second half of back-to-backs and the fact that two losses could result in them falling to 5th in the division this game is kind of a big deal.

Here is how the season series has played out so far:

The Penguins have only soundly beat the Blue Jackets in Columbus, which makes sense because they are about as intimidated by that stupid cannon as they are playing the Capitals in the second round. I guess what I’m trying to say is that nothing really matters because the Blue Jackets have Ian Cole and therefore they are the favorites to win since he will give away the Penguins strategies, top secrets, play calls, and coach signs all while blocking every shot the Pens attempt. That’s right, the Penguins are going to finish this game with 3 shots on net, because even God needed a break on the 7th day. I mean, if you need the proof that Cole was the missing link for the Penguins look how successful he has been on the Blue Jackets top penalty killing unit: 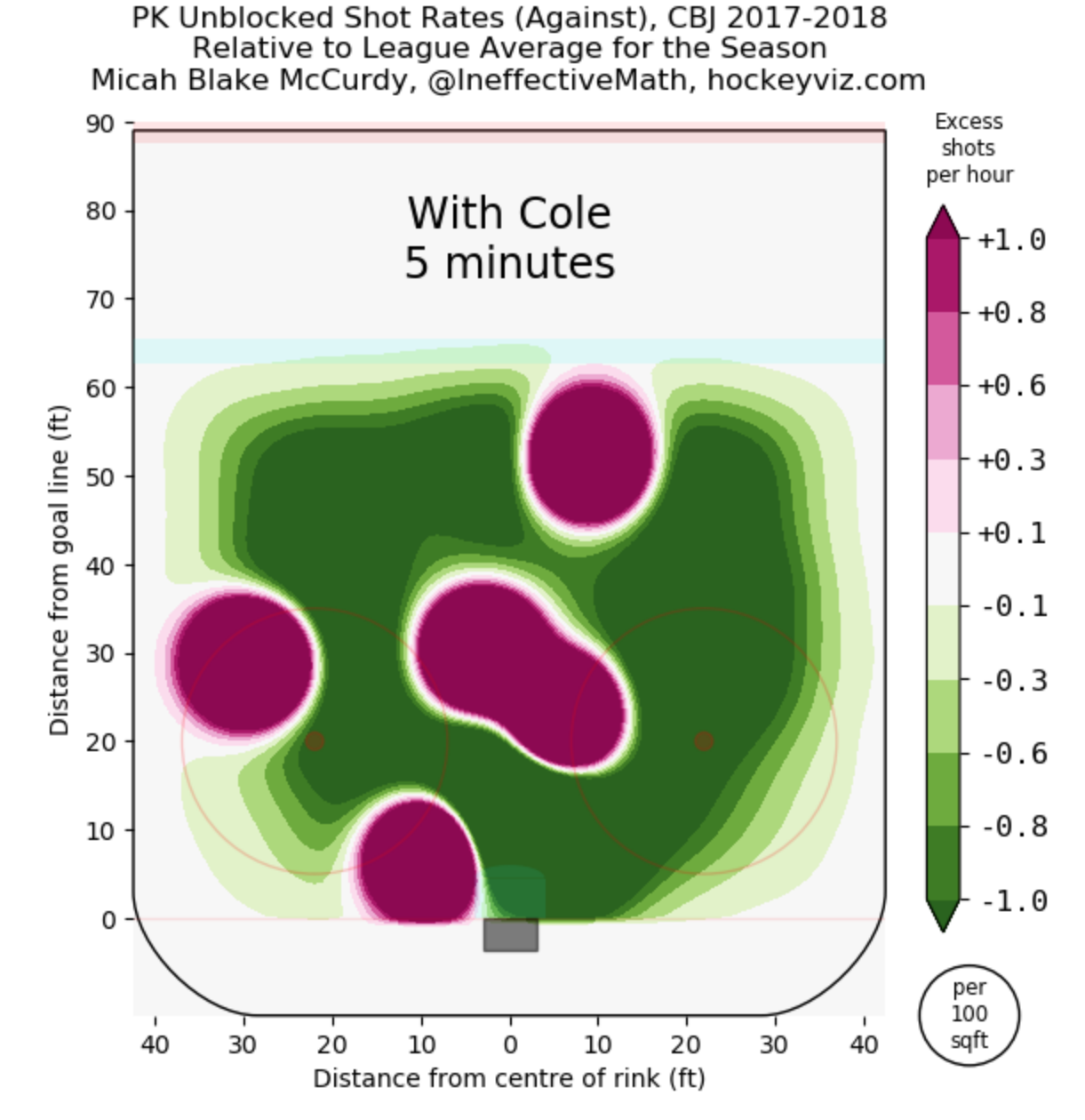 That is a lot of green, and green means good! Good job Ian, you PK specialist you.

Anyways enough of that, let’s see how he is doing at 5v5 which is where he is desperately missed 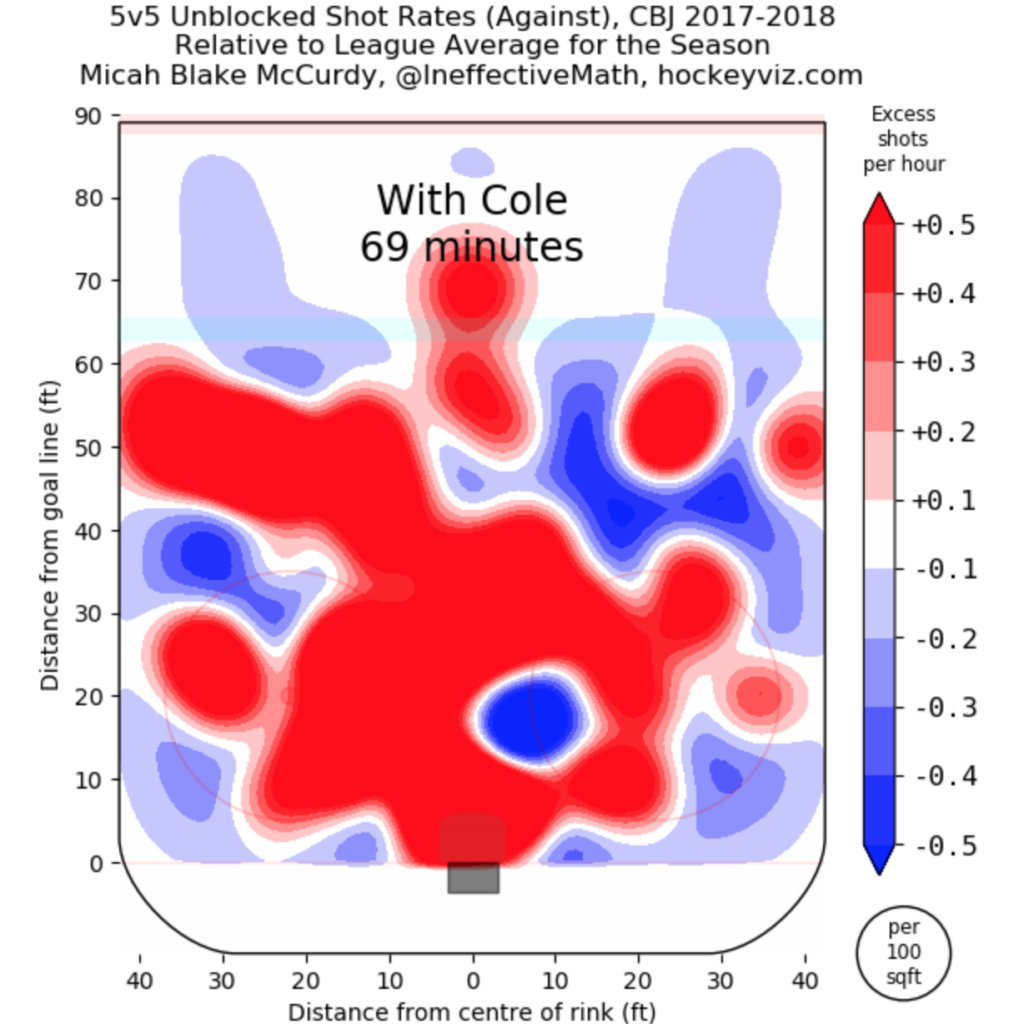 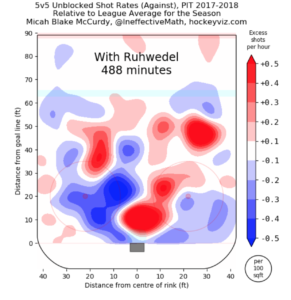 And here is what Cole looked like as a Penguin: 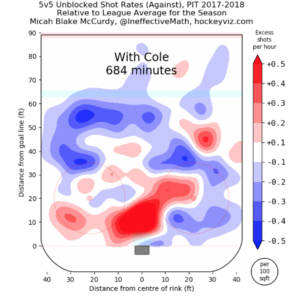 Finally we dive into the Pens PK with and without Cole 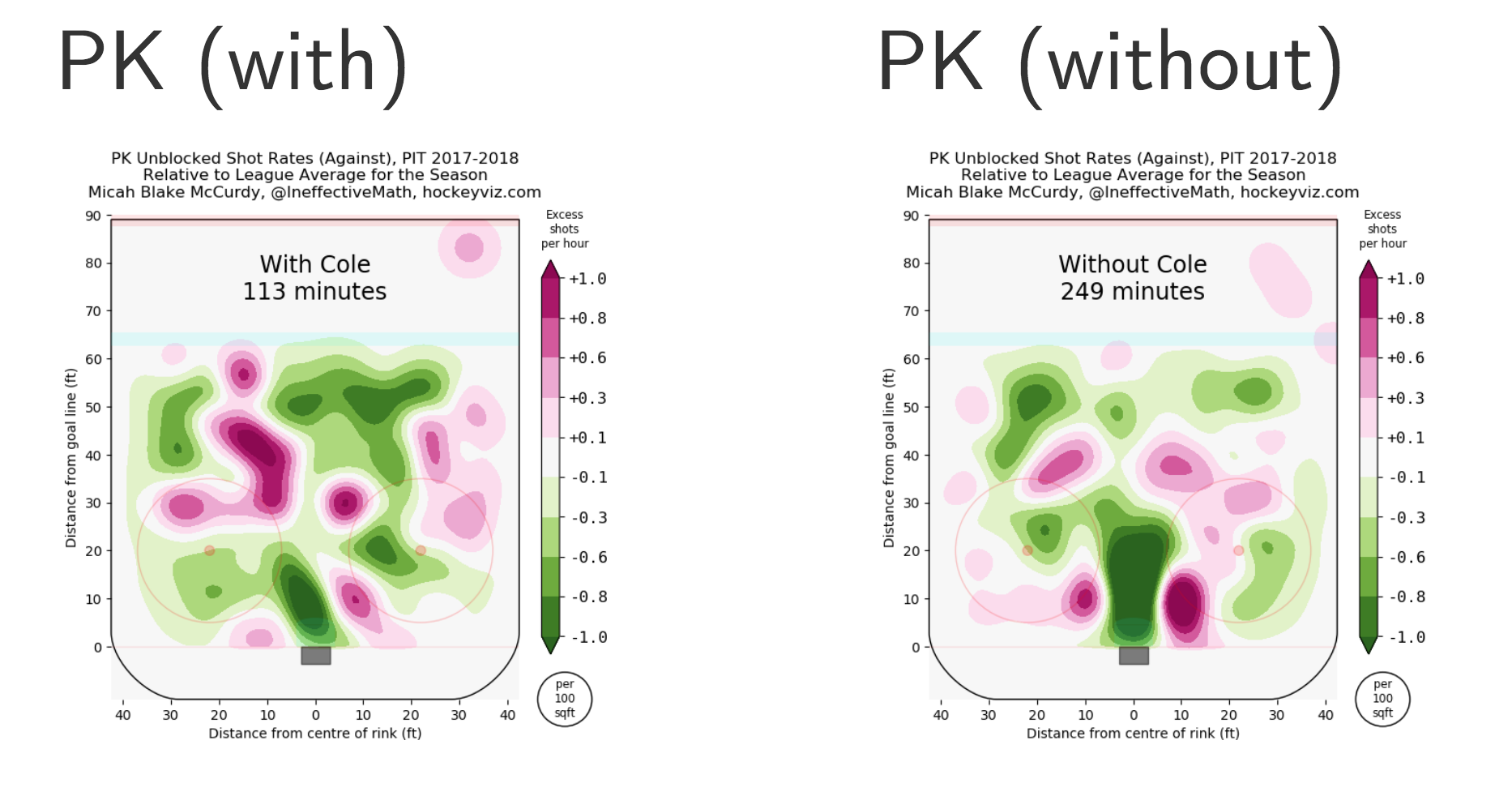 As always, all of the above images c/o Micah at hockeyviz.com

As you can see there isn’t much difference with or without Cole other than the side of the ice he isn’t on getting more shots to net. The biggest difference in the penalty kill since Cole was traded is the goaltending, which has failed to bail the team out when the coverage gets beat. This isn’t just on Murray but on every goalie for the team.

So what should you expect tonight?

Ian Cole to score a goal early of course. 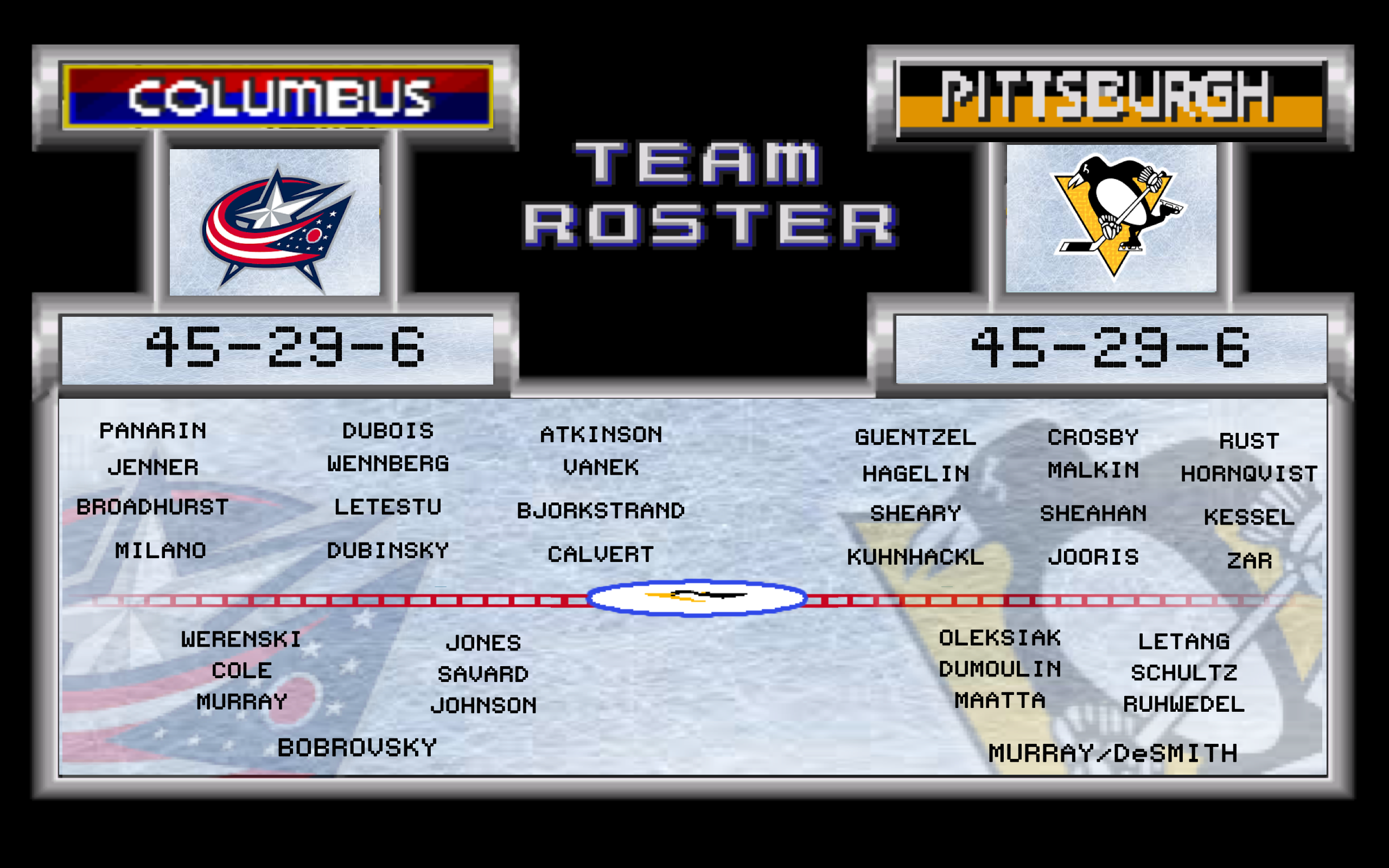 Phil Kessel has barely practiced since the last game which is concerning since the team has had three practices, it basically means he is insane for keeping his Iron Man streak alive which is why it is titled an Iron Man streak. Other then Kessel, Derick Brassard and Carter Rowney are also yet to skate with the team. Sullivan switched up the right wingers yesterday which is a welcome sight  after realizing that Malkin and Kessel just didn’t have any chemistry in the last two games. Defensively it was Ruhwedel taking shifts in the sixth spot yesterday with Hunwick rotating with Gonchar so I would look to see which one leaves the morning skate first but my money is on Ruhwedel.

For the Jackets, they still have Brandon Dubinsky

The Pens haven’t had to face him too much this year thanks to him finally getting what was coming to him. Since the injury Torts has criticized Dubinsky on everything from his effort to his skill and now the $5.85 million dollar for THREE MORE YEARS forward finds himself centering the 4th line with his 5 goals and 10 points in 60 games played… definition of “woof.”

The media knows the importance of this game. The Penguins know the importance of this game. Even the lower IQ Blue Jacket fans know the importance of this game. It’s a ginormous 2 points needed for the Pens which translates into Matt Murray is starting, Malkin and Crosby are dialed in, and tonight we will see what this team is made of. Some of the fanbase has been getting antsy wondering if this team has what it takes to play playoff style games and though we’ve seen a few in the last 2 weeks tonight will be the test. There are only two goals for the Penguins tonight and they are (in this order): do not get injured, win. Like the rest of Ohio Columbus doesn’t have an identity so they try to steal it from everyone else and the one thing they love to do against the Penguins is muck it up. That’s fine, it gets the blood boiling, as long as the Penguins escape this game healthy then it will be a success heading into the playoffs. The team can adjust to handle the Caps in the first round, it will be a lot tougher to adjust to handle anyone without 87, 71 or 81.

It’s a big one tonight, brother, so everyone needs to do whatever it is they do that brings the team wins. If you need to eat some hotdogs then start eating some fucking hotdogs. We’re all in it together, brothers. No excuses, tell your significant other that Rad says you’re busy, they’ll understand. Don’t worry about getting any work done, you’ve been working hard all year and your boss hasn’t said “thank you” enough, so you get today off. I hope you’re ready, because it’s a royal rumble tonight, brother, lets gooooooooooooo

It’s a HPP double-header today.  First, from the Caps game:

And now, for the main event, it’s a showdown: