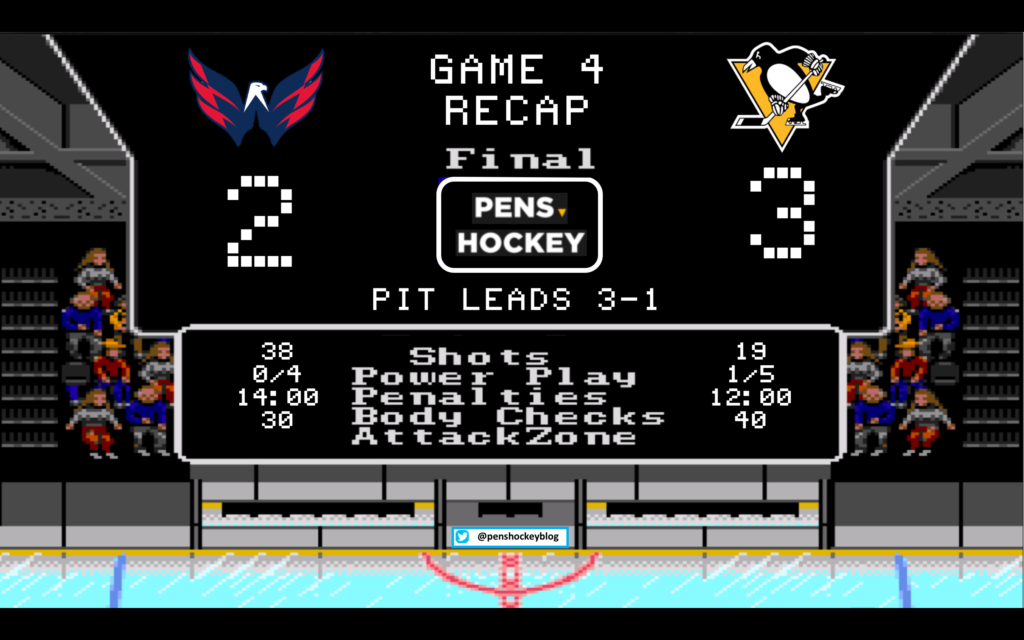 The season was over. The Penguins were done. The Capitals are 5-0-2 all-time when facing a Sidney Crosbyless Penguins team. That’s cute but that’s also regular season where the Capitals are 5-0-2 against most teams. This is the playoffs though honey, and the Penguins are 8-1 all-time in playoff series against the Capitals, and they are one 60 minute effort from making that an impressive 90% completion rate. All of the narratives were set but everyone in the media once again forgot that though they wish it did the stuff they write doesn’t reflect the mood of the Penguins.

Marc-Andre Fleury has consistently been labeled as the nicest guy in the locker room, the dude looks like he serious questions whether or not to swat at a pesky mosquito, so when he does this it is pretty fantastic:

fleury is too real for this pic.twitter.com/LzrErLDmNt

It’s Thursday, May the Fourth be with you, the Pittsburgh Penguins are one game away from eliminating the Capitals. GIDDY-FUCKING-UP.

Some were a little anxious on how the Penguins would respond to the Crosby injury. Would they retaliate with early penalties? Would they try to play more physical? Would they dress Tom Sestito? No. The Penguins did exactly what they had to do, ignore the tactics of losers and play like champions. Sullivans message in the locker room was probably crystal clear, play your game. Less than 5 minutes into the period the Pens got the start they wanted.

Loved this stretch pass on the first PIT goal tonight. Quality celebration by Hornqvist too. pic.twitter.com/qGyffZOvKX

In another must-win game the Capitals are trailing. They have to bring everything they have to start the second period. If they could only get the next goal and tie this thing up early maybe there would be hope… first: the Penguins don’t have their best defender or their best forward, why in the fuck are you relying on hope, second: ORLOLOLOLOLOLOLOLOLOLOLOV

Guentzel is just willing pucks in the net these days. His eight playoff goals lead the NHL. 😮 pic.twitter.com/HWLf7YTXfK

With Crosby out Matt Niskanen doesn’t know what to do with his stick so he uses it to take away the drop pass option from Guentzel… (if you look at the opening freeze of the gif above) With that option taken away The Jackal can either carry the puck behind the net or just throw it towards the rattled Holtby and see what happens. The Capitals happened. Niskanen and Orlov pairing… thanks Barry.

Everyone was feeling good but the Capitals weren’t going to go away that easily. 4 minutes after The Jackal goal it was suxnutsoff getting his 45th goal of the series.

Kuznetsov snipes to get the Capitals on the board pic.twitter.com/9aoJdWLiYD

Turn-over by the Penguins defense shows you how important good clears really are against Washington. 1 minute later Trevor Daley showed everyone he didn’t learn his lesson, and Nate Shit ties the game up.

Nate Schmidt ties it at two with his first career playoff goal pic.twitter.com/maZ5s4kwNN

Too many black and gold members standing that close to Fleury, as they were obviously set back by the offensive burst and decided to fall into a shell. Easy to say “don’t do that” from my position though.

Tie game. This is what the Capitals have wanted. Yeah, they didn’t get the start they wanted and they were down 2-0 to a team they should be beating but hey, better late than never. Then the Penguins get a powerplay opportunity.

The entire Penguins defense has done exactly what everyone that actually gets paid to talk about the Penguins said they couldn’t do in this series. They have not only covered the Capitals but they have also contributed offensively. The fuck are we paying these people for? Unfortunately for Penguins fans this may be the last 6 weeks of Justin Schultz, because someone is offering this man a lot of money after clutch goals like this.

Perfect shot by Schultz. What a steal by Rutherford. The rest of the third would result in some make-up calls to even up the power play advantage. Barry Trotz would complain after the game saying some of the penalties called against the Capitals were “light,” but he is most likely upset that he can’t hang himself due to having no neck. A man with no neck coaching a team that chokes…

The third period was all about holding on. The Capitals had some powerplay time to work with to start but that fizzled out faster than the Blue Jackets. Washington put everything they could on Fleury but the man wasn’t having it.

Jake Guentzel nearly blew the roof off when he hit the post with 5 minutes to go as yet another clang of iron sends doubt through Holtby’s skull. The Capitals pull their goalie with 2 minutes to go after barely sustaining enough pressure to do so and then Nick Bonino wins an Oscar.

Cross checking a defenseless player = hockey play. Trying to draw a penalty like every player does = embellishment. To be fair Capitals fans should be experts in embellishment having watched Ovechkin for 10 years. Your entire franchise should be embarrassed for embellishment. Also, I am so glad a player like Oshie would never do this in a playoff game… (Shoutout to @LoranMannistheMann for the reminder)

Don’t stand on the tracks when the train’s coming through, butthead.

Let’s be clear though:

Winning this game was not “justice.”

Justice won’t be served until we send the Caps to the golf course.