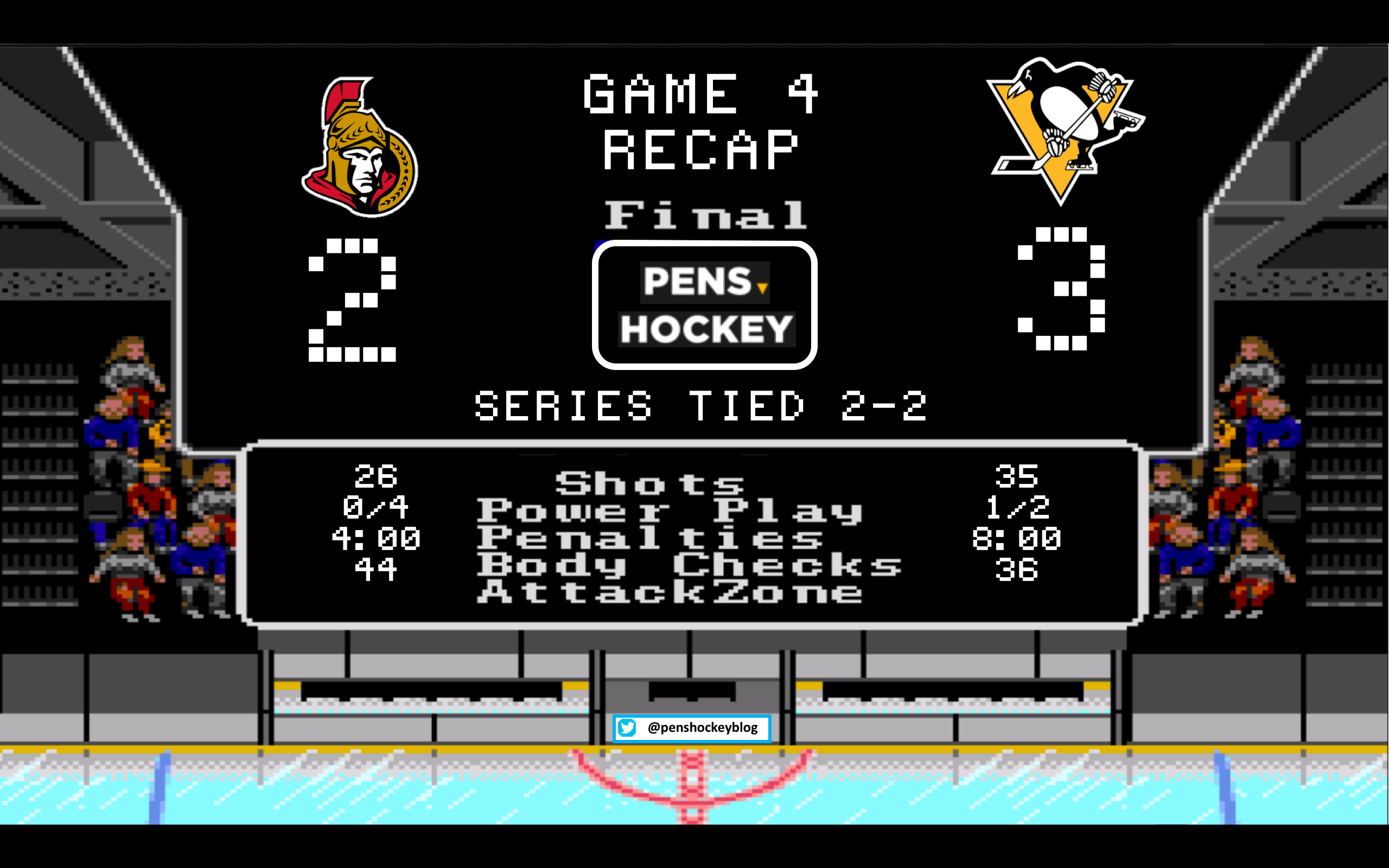 Click for a statistical breakdown of this hockey matchup

The beautiful game. In game 3 the Penguins opted to dress 7 defenders and 11 forwards in an attempt to spread out the defense and pretend they were healthy while giving up 5 goals in the process. In game 4 the Penguins lose a defender in the first and play the rest of the game with 5 defenders and win. The beautiful game. Unreal coaching by defensive coach Jacques Martin, who managed to keep the Penguins defenders even at about 24 minutes each,  Dumoulin (23:29), Maatta (24:58) Daley (23:09). How he managed to do that with 5 defenders for 2 periods is the type of stuff that goes unrecognized by most, but plays such a crucial role.

blah blah blah Ottawa fans are loud, Pittsburgh needs to do this, Ottawa does this, Phaneuf is good, same stories over and over. The biggest story going into this game was Mike Sullivan’s unfathomable decision of starting Matt Murray over Marc-Andre Fleury. How could he!?!?!?! The Senators came out flying and Murray was tested often,

and if those goals go in the Pittsburgh media has a breakdown, except for the PG who still think Tristan Jarry started. The Penguins hit some posts and Ottawa did Ottawaian things and it seemed that it would be another 0-0 period. Then the puck came to the stick of this Crybaby and a 3 on 2 developed with one of the 2 being a forward for Ottawa. Crosby with Guentzel and Maatta, you know Sid wanted to give Jake the puck but Butters was the obvious choice, and it turned out alright:

Less than a minute left in the 1st period and the puck was in the back of the net… Right when it Maatta’d. 😉 pic.twitter.com/xvjWXZOOFN

Great play by Maatta to stick with it after the puck is initially knocked off his stick, horrible positioning by Anderson who like the rest of us assumed the Penguins would try that one extra pass again. Unfortunately for Mr. Anderson Olli Maatta remembered he is allowed to shoot, and judging by his celebration he confused himself too. If Maatta loses control of that puck when it’s initially tipped Pens fans rail on him about his speed, the beautiful game.

Of course with under a minute left that was just enough time for Ottawa to pull some fuckery, and there is no better person on their team to do so than Bobby Ryan. Not even 3 seconds after a highstick to the face that left Ruhwedel bleeding (not called because the refs are biased towards the Penguins and they get all the calls) Bobby Ryan does this:

If you’re over the age of 15 and still go by Bobby you are most likely a douche. I’m not getting in to the discussion of the hit, it’s not worth it anymore. There was a wide open man in front of Murray, and Ryan could’ve easily fed him the puck for a chance to tie it but this hockey play was a better option. No penalty on the hit but Ian Cole was called for roughing after giving Ryan the business following the hit, the beautiful game.

“Just wait until Pittsburgh actually gets the lead for once, then they will see the real Senators” said a Senators fan yesterday… well Pittsburgh had the lead “for once” and it looked the same. The Penguins killed off the rest of the Senators remaining powerplay and then went on another kill after Ian Cole was called for interference. It was a penalty, but I don’t know if it was a penalty in this game. Whatever, the sound of CTC booing their own team’s powerplay is a sweet sweet sound. Way to have their backs, boys. The Penguins would kill that powerplay and then get gifted one of their own by these refs that are clearly in their favor and Sidney Crosby whined his way to another piece of shit goal.

He waits… He SCORES!

But seriously though, did Sid just see the future there or what? pic.twitter.com/gh8KY5qI4S

Locks his right skate to the post and drops his left knee to form a wall by the net, what an overrated cry baby. When you think you’ve seen everything from Crosby he invents new shit, it’s been 11 years and he’s still making jaws drop. With a 2 goal lead we actually got to see Ottawa open up a bit as they smartly realized the trap wouldn’t work. This is what their fans have been saying, that once the trap fails they open up the game and teams can’t skate with them or something. The thing you don’t understand is North to South hockey is Penguins hockey, and even with a depleted lineup it’s easy to go back to your roots. After 3 minutes of actually good hockey an unlikely defender cashes in:

So good to see Cole get an assist, he was possibly the second most deserving defender of a goal after the penalties but Brian Dumoulin is and always will be the most deserving. Perhaps the sweetest thing about this goal is the decision of Dion Phaneuf, who just couldn’t resist the opportunity to take another cheap shot at Evgeni Malkin. Geno knows, and he let Dion know.

Puck goes in off the skate of Dion Phaneuf. Malkin turns around and makes sure he knows it pic.twitter.com/Lk7q1uGl9l

Sucks to suck, bro. The Senators would really open things up now down by 3 and again that was fine. Ottawa fans will think their team really brought it because of the shots and stuff, but that is how Pittsburgh plays; allow scoring opportunities on one end and get some on your own. Bobby gets the puck in center ice with less than 3 minutes left and Ron Hainsey blows a tire, Hainsey never recovers and Bobby finds Clarke MacArthur on the backdoor for a tip in goal over Murray. Fleury would’ve had that. Period ends 3-1 Pens.

The Penguins were 20 minutes away from making this a holds your butt type of series. The Senators weren’t going to just fade away. This felt like a hockey game. “It isn’t boring, it’s defence first” yeah whatever, your ass was on the edge of your seat for this third period too. 15 minutes into the period Erik Karlsson put a shot on goal that changed directions more than a NBC analyst and eventually found its way through Murray. The remaining 6 minutes were butt clenching playoff hockey at it’s finest. The blood pressure was up. The CTC forgot they were booing 20 minutes ago. It was fun. Then the Penguins get called for another too many men on the ice penalty with less than a minute left and Anderson already pulled. No sweat. You’ve asked 5 defenders to once again go out of their comfort zone and play their best with a season on the line. You’ve had Matt Murray play sharp in his return. Mike Sullivan put his players on the ice and said you are my chosen 4, do not let them score. Ottawa hit a post 10 seconds later that would’ve brought the roof down, but don’t cry to us about posts. Matt Murray made two huge saves and that was it. With under a minute left CTC played “Don’t Stop Believing,” cute touch, fuck that song, and welcome to the playoffs.