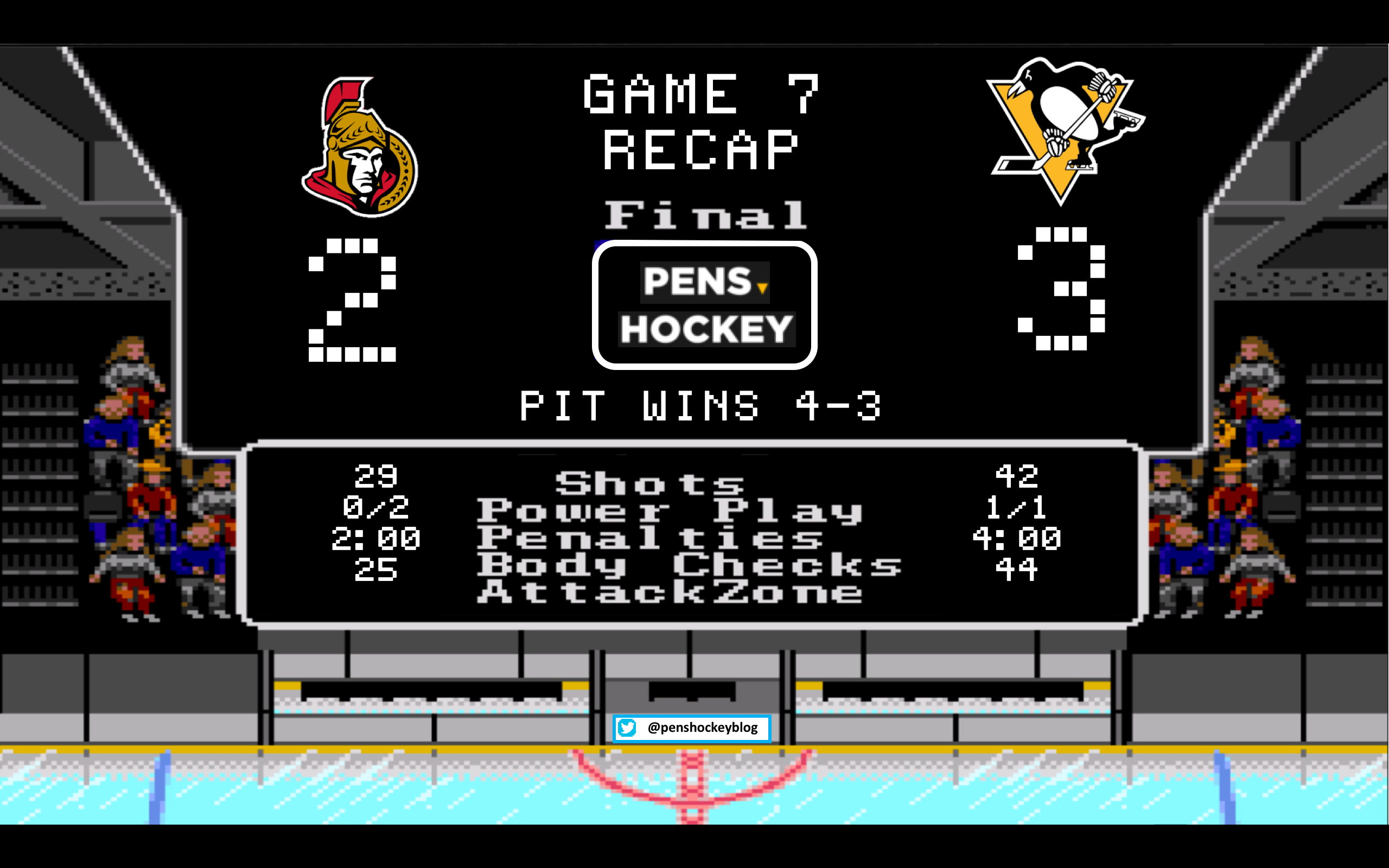 One of my favorite things about sports is how everything is made into something. “Ottawa has never won a game 7 and Pittsburgh has never won a game 7 at home after losing a game 6 if game 6 fell on a Thursday and they were calling for rain on the day of game 7 but slightly clearer skies come game time.” Those stats were originally used in broadcasts as what I call lame party topics, things you find when looking up meaningful stats and say “huh, isn’t this weird Bob?” They’ve been sorely misused to the point where we hear “Ottawa is trying to win but they’ve never won a game 7,” that shit doesn’t matter unless it was the same group of players and it wasn’t. Players individual records in game sevens also do not matter except for a coincidence, come on guys, this isn’t the NBA and Carl Hagelin isn’t the reason he is 7-1 in game 7s. The only individual that I will pay attention to in game 7’s is a coach and his record because those do matter to an extent but even then it’s one game.

Game seven is one game, two teams, and may the best one win.

One game for a dance with Lord Stanley.

Remember the days (cough Byslma, cough) when an elimination game in Pittsburgh meant the Penguins season was over? It was cute, everyone blamed it on the new Consol Energy Center and tearing down the mellon and this and that, man have the times (sort of) changed. The first period was more of what we’ve seen the entire series, Ottawa came out like a bottle rocket and the Penguins were more like a diesel truck. No goals were scored and no word yet on if anyone jumped off the bridge at this point.

The 2nd period looked a lot like the first period, with Pittsburgh carrying the majority of the offensive play but unable to get the perfect puck through the traffic. In a game as tight as this one with so much on the line you know it is going to be a mistake that costs you. Ottawa finally got caught with sloppy play along their bench and it resulted in a Sheary and Kunitz 2 on 1… which sounds about as productive as Helen Keller with a paint by numbers.

A deft pass, a little redirect, and it’s behind Anderson! pic.twitter.com/QQf48gAgTB

The initial mistake in the neutral zone started the break, but man did Anderson overplay this or what? Obviously it is easy for me to say while sitting here, but he was really committed to Sheary’s backhand and could not react to the shot from Kunitz in time. Kunitz’s first goal since you lost your virginity had The Paint Can rocking, but just like when you lost your virginity it lasted for 20 seconds. The Penguins came down the ice trying for a 2-0 lead and the Senators had other plans. Eric Karlsson takes advantage of a rough period for Olli Maatta and fed Mark Stone about 10 feet out of the goal. Stone put a perfect shot on Murray and just like that we were all tied up.

Mark Stone ties it up reeeeeal quick for Ottawa pic.twitter.com/t5f3vAuwqI

MARK STONE SWINGS HIS LONG BONE AND GOES SHORTSIDE TITTIES AND KARLSSON GIVES HIK THAT ALL YOU CAN EAT PANCAKES PASS. FUCK.

This is one of the funniest tweets I’ve read. The remaining 8 minutes looked like the rest of the game, with the Pens getting about 8 shots and the Senators 2. Trevor Daley had one hell of a series, and this play right here is a beauty:

We see you, Daley. 👀 pic.twitter.com/qpoZZWepl4

A 20 minute period (or so we thought) to decide who goes to the dance, it’s perfect when your team isn’t one of the two playing and it is hell on the heart when they are. Every shot made you verbally groan, every 3 on 2 rush by Ottawa made you freeze, what a sport. Half way through the period the Penguins get their first and only powerplay of the game off an interference call on Dion Phaneuf. Kessel did his part in making Don Cherry proud of how American boys dive, but the facts are Ottawa was going to be penalized at least once in the game and it was interference. On the powerplay this washed up, never going to amount to anything not even good enough to call a “has been” stepped up and showed his former teammates what it looks like to be playing hockey in late May, again.

With Hornqvist still out the Penguins needed someone to be the net front presence, and who else but the man that has done it for 8 years? I would love to get a camera angle right behind Schultz to show what exactly he sees when he shoots this, just an unreal shot in his first game back from injury.

I compared them to an annoying hangnail earlier in the series, and true to my analogy the Senators would not go away. 3 minutes after the Schultz goal Ottawa gets the break they need as Karlsson beats Murray with a shot but it finds the post, ricochets off Murrays back and right to the stick of Dzingel. The play was Karlsson’s 16th playoff assist, damn.

When I woke up prior to game 7 I thought to myself that it was weird that only 1 game had gone to overtime in this series considering Ottawa had played like 28 overtime games in the playoffs. Then I thought that this game would go to OT but the hockey gods wouldn’t be that cruel. Turns out they were. It’s the greatest trophy in all of sports, and if you want it you have to earn it.

Playoff overtime is nuts. Playoff overtime in a next goal wins the series situation is bath salts mixed with speed injected directly into your brain. Every time your team gets the puck in the offensive zone you get excited, you start jumping up and down over passes, fucking passes, not even shots. Every time Ottawa came down the ice you clench your ass together, you physically feel your chest tighten as your whole body stops until you see Murray calmly squeeze the pads together. Holy Fuck. What a sport. The Penguins brought it in overtime but much like the rest of the game could not find a way to get the puck in. Phil Kessel had an impressive drive to the net that went off of the post and then over the top of the net, from the overhead angle it looked in but it clearly wasn’t. Major props to the dumbass that decided to only show the overhead angle at PPG, resulting in fans getting mad and sticking it to the man by throwing their towels on the ice. Every city has their pieces of shit, unless there is a hattrick or it’s some tradition (still have nightmares over the Florida rats) you don’t throw things on the ice. Period. The thought process kills me: “I’m pissed so I’m going to throw this towel!” Other dude-“Hey he threw his towel because he’s pissed, I’m pissed too. Here have my towel!” Ref- “wow these guys are throwing towels, maybe we should reverse a call for them,” stupid. The overtime was intense but nothing came from it and the trip to the dance would be postponed for another 20 minute intermission.

Just like every period the Senators came out firing, like a bottle rocket as I said before, quick flashes and nothing else until you light the next one. I grew up listening to Mike Lange, and when a man that has seen as much hockey says something about a trend he notices you don’t forget it. “Most overtimes are won in the first 5 minutes or the last 5 minutes.” One of the truest observations by the hall of famer. 5 minutes into the 2nd overtime Sidney Crosby was doing his thing behind the goal, and when he looked up he saw Chris Kunitz…

And lookin’ for more… pic.twitter.com/6cAMXbFsUP

on the night the Pens punched their ticket to play for another Stanley Cup, they win their 87th playoff game in the Crosby/Malkin era. 87. pic.twitter.com/diDXDiBTjX