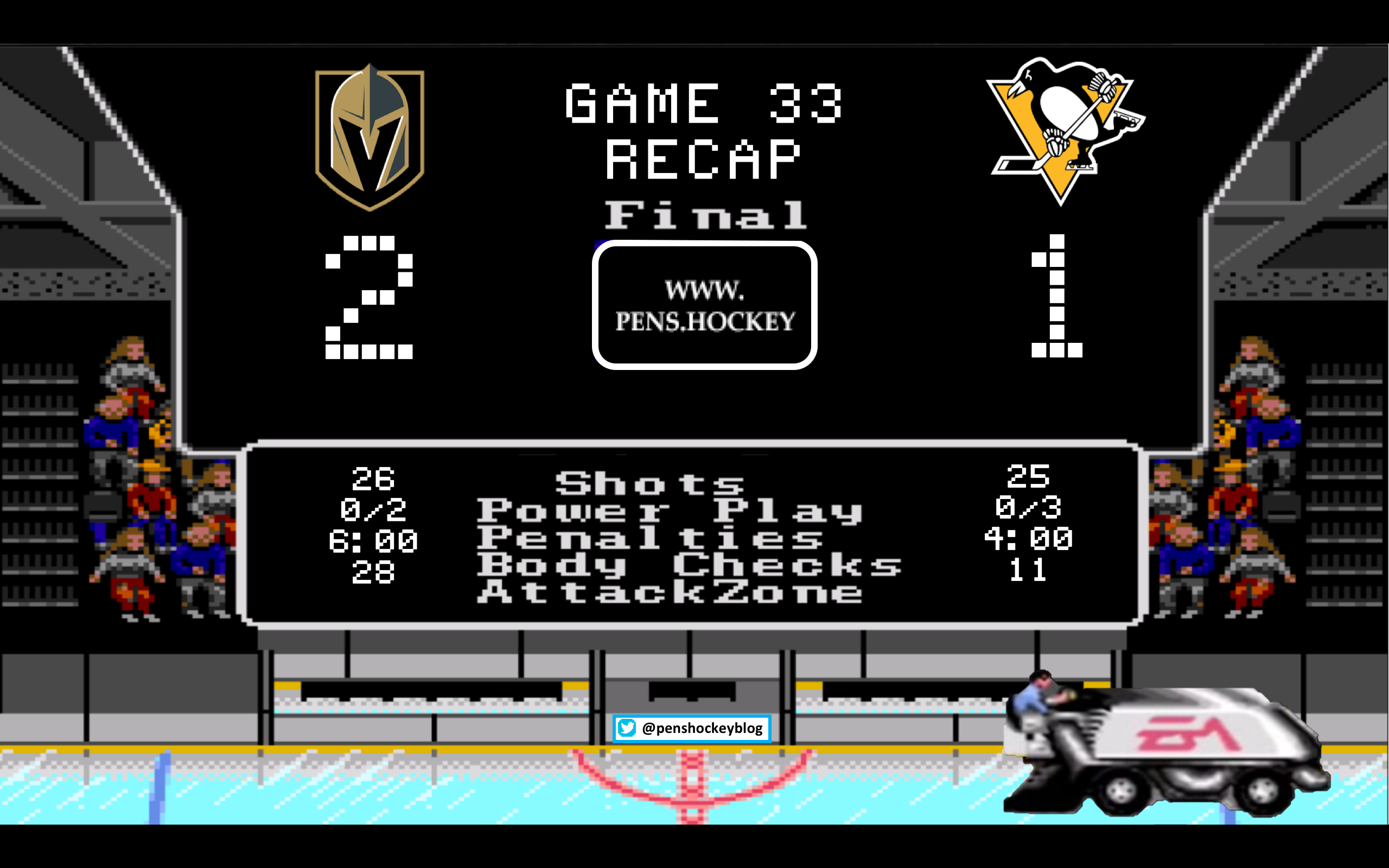 The Penguins entered the sin city for the first time in team history and they were pretty well represented:

Early estimates were coming in that over 8000 Pens fans were in attendance, which is just nuts. This many people travelled to Las Vegas to see the Penguins play (yes I realize a small amount of them live around the area), yet Mud Boonshine thinks leaving games 4 minutes early spells doom for the fanbase. My honest feeling leading into the game was echoed by Jesse Marshall on Twitter:

Though this isn’t the way it went, the goaltending in this game was everything you could’ve hoped for, and hopefully made you appreciate how ridiculously blessed this team was last season.

SO with that said let’s get the tears out of the way early:

Matt Murray on playing against Fleury: “he was the greatest mentor and coach I’ve had in my career, I wish I would have had more time with him.”

Marc-Andre Fleury on playing against the Penguins: “dis is [indistinct french rumbling] penguins and miss I [more rumbling] I think *Fleury Smirk*”

Before the game started the FCC voted to end net neutrality. Since we are a privately owned address this mea

sage and the site may ta

ke longer to load but at least the corp

orations will get more money.

Everyone knew leading up to this game that it was either going to be a 1-0 game, or a 9-0 game with Perron, Neal and Engelland all getting hattricks. Less than two minutes in the latter of the two predictions was looking good after James Neal found a rebound

Most important thing about the goal was Murray’s lateral movement in his first game back since a groin-area injury. He seemed to be able to get across pretty quickly while keeping his body up, but like him or hate him James Neal knows how to score goals.

Following the goal both teams played some really good hockey, and it was both goaltenders stealing the show as expected.

This saved mixed with this information:

As we are well aware, with every great athletic save from Fleury eventually comes an open opportunity if you can get him moving side to side. Riley Sheahan used some relentless pressure to steal the puck in the offensive zone, and sent a pass intended for Ian Cole through the front of the crease. Sheahan got a little help from his friends, and Ian Cole got a little healthy scratch redemption.

Top notch pass by Carl Hagelin here and a great pinch down low by Cole. The third line has been building some pretty good chemistry, especially Sheahan and Hagelin who have been the steady pegs on that line with a constantly rotating third person.

SIDEBAR: In looking for the gif of the Cole goal I found this ridiculous footage

Talk about a momentum swinging goal to start the third.

Back to the NHL, there would be no other goals in the period.

The second period was more of the same, so I am going to take this moment to mention something that didn’t feel right to throw in the intro with all the Murray/Fleury tears.

Sullivan tried out Simon on the first line a few times in the Colorado game and to his credit Simon looked pretty good all things considered. I have no problem with him starting here in this game because that is a trend we’ve seen in the Sullivan era. When a player gets called up they play one or two games in the lower lines to get the feel and then get put on Sids line. It’s been the same story for Sheary, Rust, Guentzel and now Simon, so I get that. The issue here is it puts Bryan Rust on the fourth line, which is not a problem in terms of having skill on the fourth line. The problem is anyone put on the fourth line is automatically handicapped because Mike Sullivan doesn’t trust Ryan Reaves, so now you have a player playing some solid tow way hockey despite being snake bitten in Rust basically being penalized because of a player the team refuses to scratch. Rust (8:09), Rowney (6:35) and Reaves (5:10), is not an effective way to roll 4 lines. Meanwhile, the lowest time on ice total for Vegas was 4th line winger Tomas Nosek with 9:42.

9:30 to 10 minutes is an appropriate amount of time for a 4th liner. 5-8 is not. Call up Josh Archibald, scratch Ryan Reaves, and let Rust-Rowney-Archie play for ten minutes and I would bet my professional blogging license that the Penguins would start looking like the Penguins of last March.

Other than that only one thing happened in the second, and of course it would:

is 6 am too early for bourbon?

This game had everything the fans wanted, exciting hockey, posts, big saves, literally everything the NHL should’ve predicted when they were sitting around deciding which game to air on national television. The tough decisions the league is faced with

The third continued to be all about the goalies, until 8 minutes in when the Knights found an open man with a drop pass as they entered the zone:

Rough rough rough turnover by Dumoulin here, who goes for a cross ice through the neutral zone pass instead of a simple chip during the change. With bad decisions comes great responsibility, and Dumoulin had a chance to make up for his mistake with a block on Merrill’s shot but “had a chance” is the key phrase there. Merrill put this puck perfectly on net for his first of the season, if you fault Murray for this one you are probably wearing a Fleury frankenstein jersey.

The Penguins continued to press but once again it wasn’t happening and time would eventually tick down.