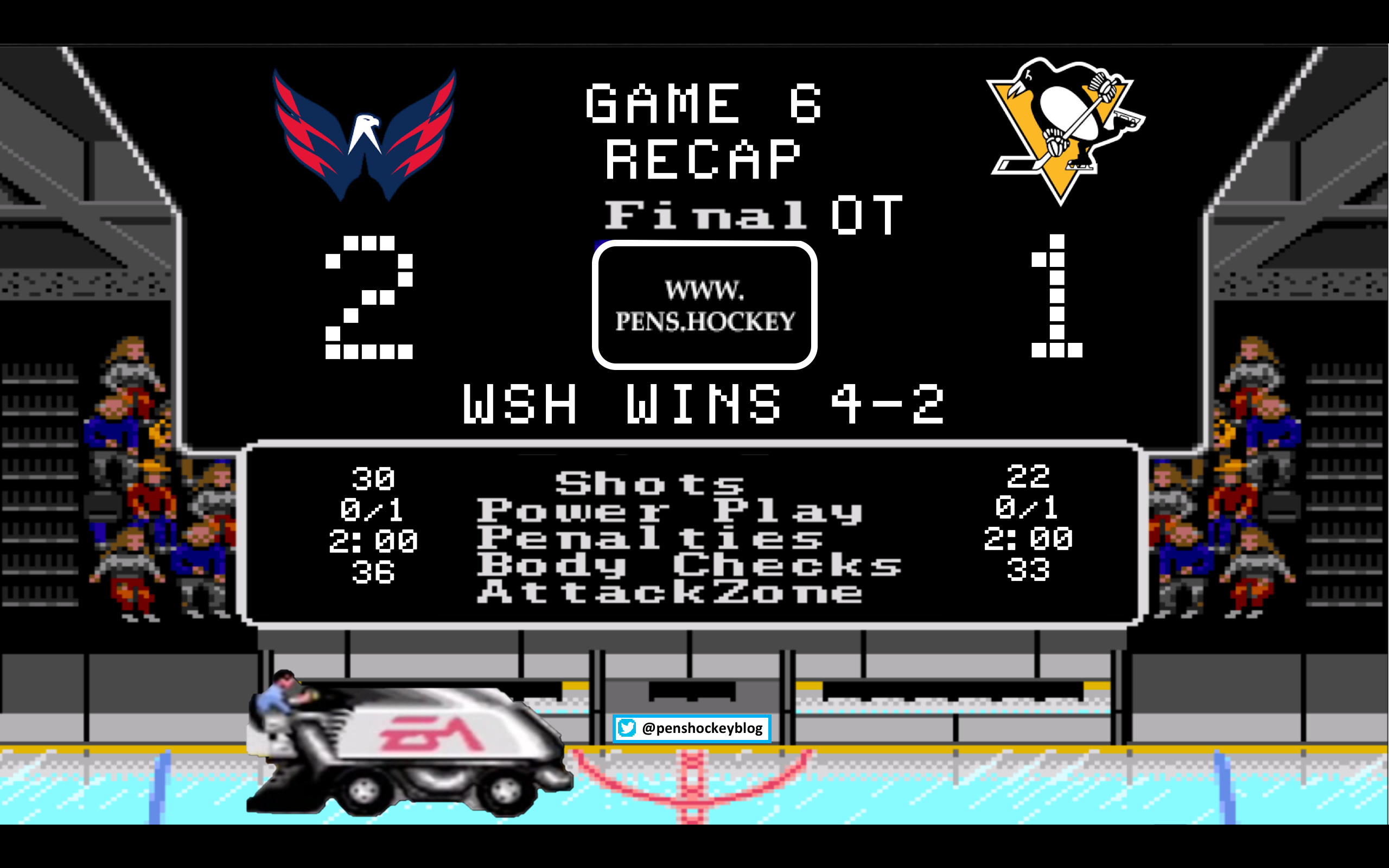 The banner is linked to stats as allways

There isn’t much to preface this one for. The Pens were in a must win situation at home. You were most likely nervous all day long. Finally it was time to drop the puck.

The first period may or may not have happened. Both teams were extremely tentative, there is literally nothing else to report.

The second period started out differently than the first and it was all Capital momentum. Just 2 minutes in Alex Chiasson receeived a puck from behind the net and snuck in in near side on Murray.

Following the goal the Penguins basically died. Shift after shift was nothing but “meh” for effort and the Caps took advantage of that, nearly going up by 2 at least a dozen times but Murray was able to fight it off because those shots involved making tough saves.

After 9 minutes of sustained Caps pressure the Penguins got a faceoff in the offensive zone, NBCSN announcers were mentioning how bad the Penguins look which was right on cue for Letang to fire one

The puck changed direction leaving Holtby without a chance.  Following the goal the Penguins finally had signs of life and started bring the pressure but the Caps were able to hold them off. Washington played one of the most defensively minded games I’ve ever seen from the Capitals and it was being executed perfectly.

By the end of the second it was 1-1, so at least the Pens couldn’t blow their third game of the series when leading after 2.

The third period was essentially the first period with brief moments of chaos. There were like 2 shots on goal in the first 5 minutes. Each team would eventually get dangerous looks but both goaltenders kept their team alive. By the ten minute mark it felt like either some guy you would never expect would score or this would go to overtime.

By the time the frame was done the Penguins managed 5 shots on goal to the Caps 9.

Both teams started overtime off like they wanted to win early. As you know Mike Lange always says overtimes are either won in the first 5 minutes or the last 5 minutes. About 3 minutes in Tom Kuhnhackl nearly capped off his great game when he clanged one off the post. A few minutes later Sidney Crosby entered the offensive zone and sent a backhanded pass right across the zone that missed Hornqvist by 5 feet and resulted in a brief odd man rush until Kuznetsov was fed and was wide open. He walked in and put the Caps into the third round. A lot of people immediately started bashing Letang for the goal, that goal doesn’t happen if Crosby isn’t trying to make that ridiculous pass.

First and foremost, congratulations to the Caps and their fans. It’s been a long time since they’ve been able to taste the third round, hopefully yinz realize you’re only halfway.

Secondly, how crazy is it that we haven’t witnessed this since April 24th 2015. Over 3 calendar years worth of winning, what a fucking run.

Third, this wasn’t a “Murray isn’t as good as Fleury” thing, this isn’t a “Letang sucks” thing. This is simply a “it’s really really really hard to win three straight championships in this league due to the current schedule construction” thing. It’s been 948 days since the start of the 2015 season, and the Penguins have played in 306 games in that span. That calculates out to one game of hockey every three days despite that offseason. That is a ton of hockey and if you are blaming anything right now blame the human body and mother time.

From all of us here at pens.hockey, thank you for coming here and tolerating the words we put on this site. Thanks for keeping the comments section alive. These last two years have been a lot of fun covering this team on this site for all of you. Until next time, this is Rad signing off