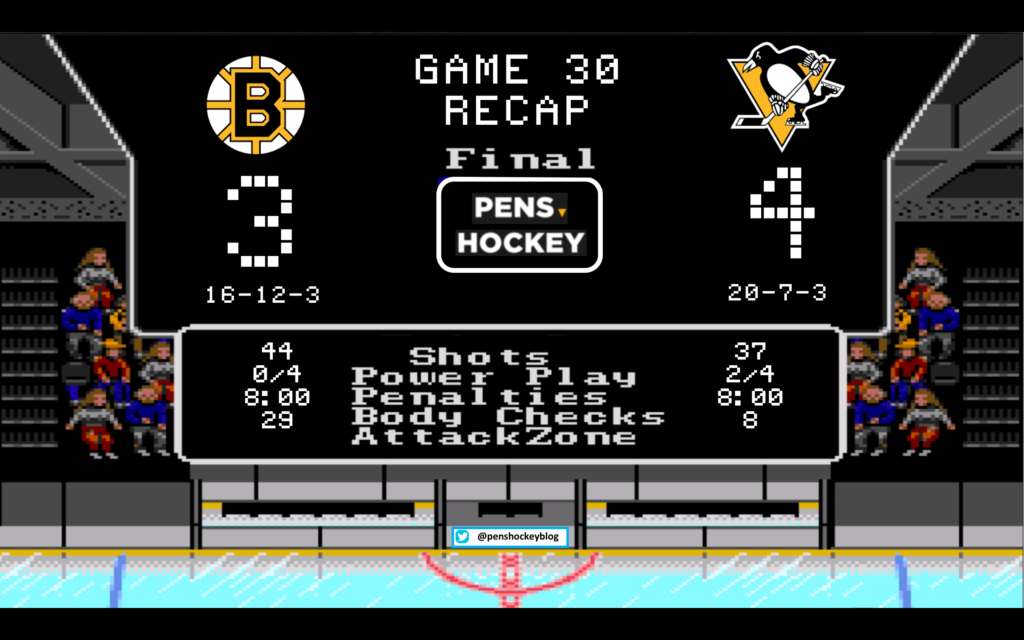 The Penguins entered this game on a six game winning streak, and Boston just felt like the team that would end that, because Boston isn’t good for anything but ruining fun. Unfortunately for Boston, their hockey oganization is a ghost of what it used to be but they are in the Vancouver Canucks zone of just competitive enough to not go full rebuild mode. Mike Sullivan benched Fehr for the 4th straight game, so don’t hold your breath on him being on the roster much longer. Mike Sullivan also proved that Matt Murray is the number one goaltender by rightfully starting him in 4 straight. If you were able to put the game on mute so you didn’t have to hear which highschool player XXXXX’s sister’s neice went to when he saw hockey for the first time, it was an enjoyable game.

The game started off with a lot of speed and back and forth play. NBCSN was thankfully there to remind us that the Bruins don’t suck or something. Pierre McGuire couldn’t believe that Brad Marchand was able to score without being on Crosby’s wing, as he let a shot go that snuck through Murray. Not the best first goal to give up in the world, but since the Penguins are defaulted 4 goals right now it may be alright. Will the real Justin Schultz please stand up.

Two minutes after the Bruins scored we saw a similar play unfold: Conor Sheary with a great move at the blue line to simply pass the puck to Crosby for a clean zone entry, Crosby cross ice to space to Schultz while Hornqvist drives two Bruins away from Schultz as he heads to the net. Justin Schultz is shooting into a soccer goal at this point.

The Bruins have always been a team that gets bodies to the front of the net, and it has worked for them for years. Matt Murray makes some big initial saves but without a defender strong enough to clear the scrum David Krejci was finally able to put the puck in and the Bruins took a 2-1 lead. That’s alright, it’s okay, because Nick Bonino’s beard is here to stay. Three minutes after the Bruins took the lead Nikki Bones and the Gang Bang got lit.

What an outlet pass by Daley. Dominic Moore still doesn’t know where Bonino went with that fake pass. Matt Murray now has as many assists as Eric Fehr

I can imagine Sheary and Crosby staying after practice one day and Sid just teaching Conor how to pull off this shot. Brian Dumoulin is slowly coming back to the form we saw him in in May and June, just a great pass here. In a tight checking game the Pens cash in on 2 powerplays, yes please.

I mentioned in the gameday post that David Pastrnak has been scoring a lot of goals recently. With just under 7 minutes left in the game an innocent puck goes behind the boards and Murray goes all Carp-Andre Blurry on us, resulting in a desperation save attempt by Bonino which failed. Some people got all mad at Murray, some people need to realize he made 44 of 47 saves which is a 93.6% save percentage (Fleury is currently at a .900 on the year, which equates to 4.7 goals, so call it 5, being allowed in this one). Conor Sheary with a break away in the final minutes but Tukka Rask decided he is still pretty good at this whole goalie thing.

3 on 3 for life. Many coaches fail at their jobs due to an inability to feel out what works within the team. With this roster it would be easy to throw Crosby-Malkin-Letang out in overtime. Not Sullivan. Malkin-Rust-Schultz. Not many coaches behind the Penguins bench in this same situation opts for that line in the second minute of overtime. Not many coaches get this win.

Another beautiful pass by a defender leads to a goal, as Schultz collects his third point of the night. Malkin with all the trust in the world in Bryan Rust just chips it to space, and Rust takes a chance with the puck being on edge that Rask won’t be able to pick it up, spoiler alert, he was right.