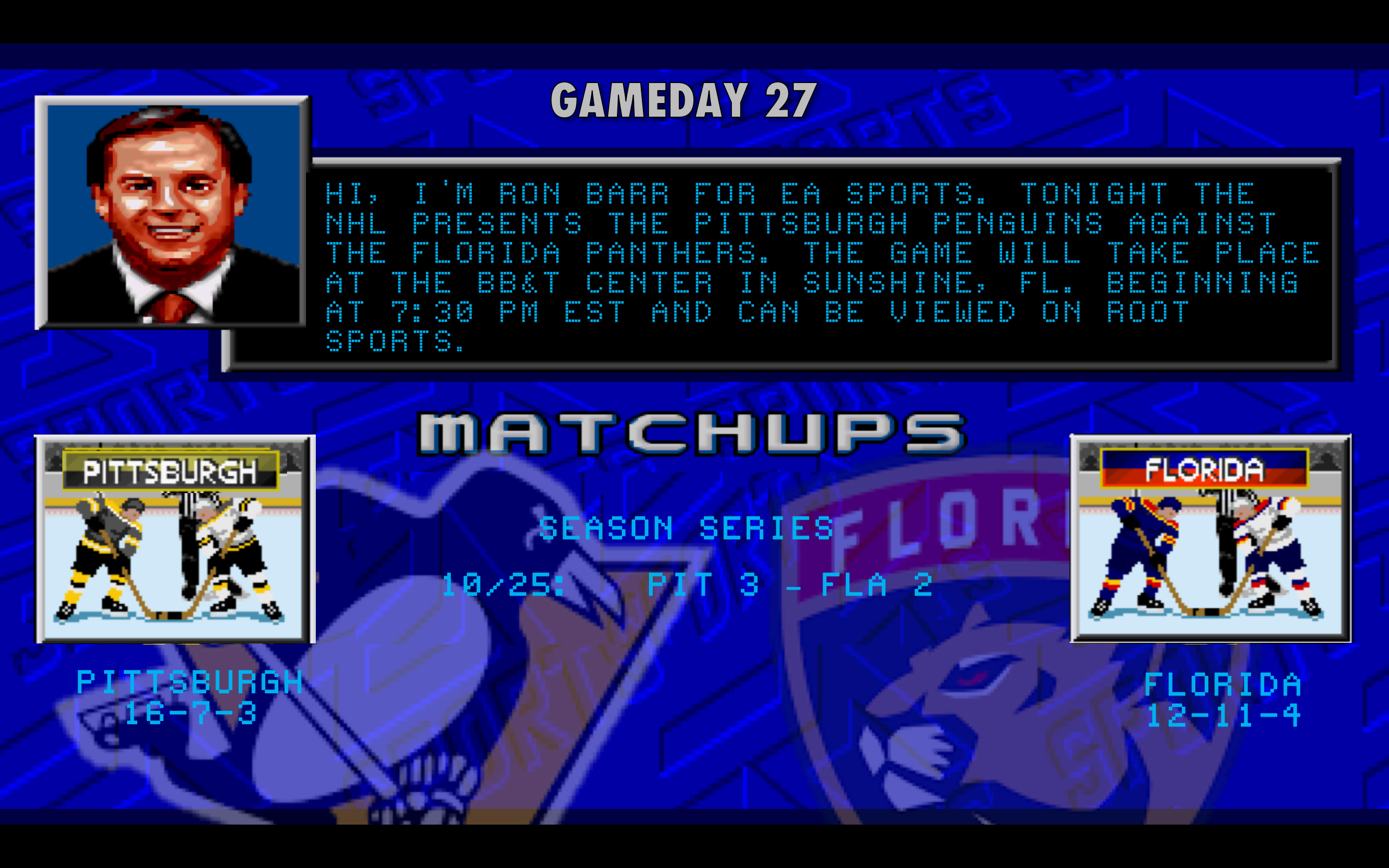 The Penguins fly in to the Sunshine State riding a 3 game road trip and Dion Phaneufs mom. The Panthers enter the game on a 3 game losing streak, and are overall in a bad place. They kicked their Jack Adam’s winning coach to the curb at the start of their last road trip, notoriously leaving him to catch a cab in Carolina, and are now coached by their GM.

Can you imagine if Rutherford fired Johnston last year and took over as coach? What a joke of an organization, just move them to Quebec already.

Don’t look now but nhl.com released their “super 16” rankings and the Penguins come in at number 1, which is interesting because right now the Pens are playing a carefree let the offense play style and giving up a ton of goals. That play also has them sitting on top of the very good Metro division. How good is the Metro? The two wild card teams (Washington and Philly) would be in 3rd in the Atlantic, and there is only a 10 point difference between the last place Islanders and the Pens. This is why the Penguins need to collect these easy points against struggling teams, and a proper tea bagging of the Panthers is what the doctor orders for tonight.

We initially struggled a bit with the Gomez winner for Florida, they have over 8 million dollars in capspace. Then the pens.hockey CIA team found the most questionable signing to date…

Who in the fuck signs a back-up goaltender to a 3.4 million dollar 5 year contract? Especially a goaltender like Reimer, who sucks more than a Las Vegas prostitute during wedding season. There is no way they made this deal thinking that Reimer would take the reigns from 96-year-old Luongo either, because that is completely delusional. On second thought, that is probably exactly what they thought. 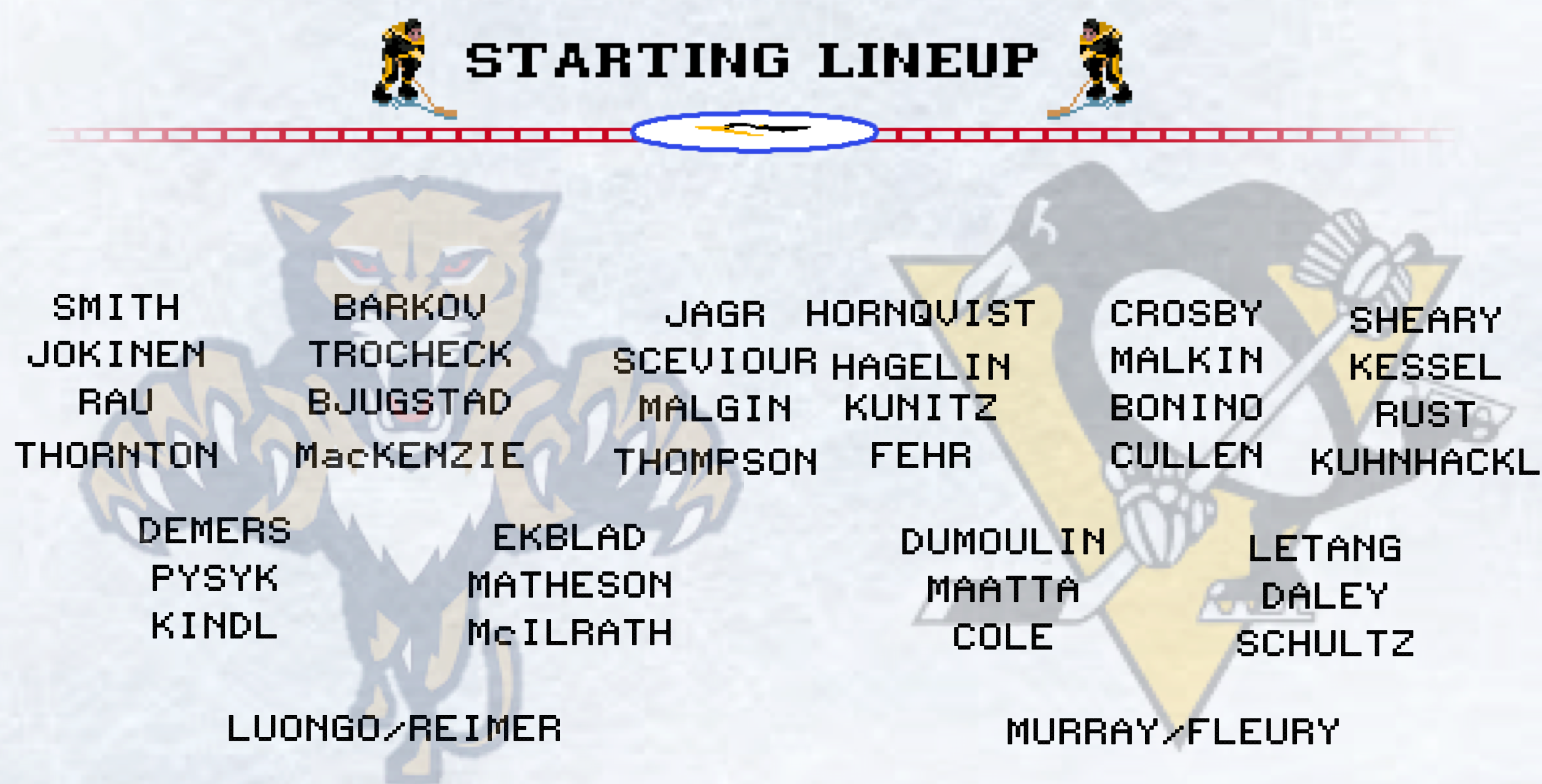 McIlrath is a pretty sick name. Note that Keith Yandle was held out of the last game and that’s what this lineup is based on, so the Florida pairings may change. Scott Wilson has been a scratch recently, so I wouldn’t be surprised if he gets back in to the lineup either tonight or Saturday against Tampon Bay. It’s always nice to see Jagr, and to hear how infatuated Errey is about his “big backside”

PPYM strikes again! In my gameday post over at tpb I made up a new drinking game that I challenge yinz to also, take a shot every time Errey says “big backside.” Also, don’t plan on attending work tomorrow. The Penguins have an excellent opportunity tonight to make it 4 wins in a row. Florida has an excellent opportunity to talk to Jim Rutherford about Fleury, which really wouldn’t be a terrible destination for him considering Luongo is almost gone, and Florida is grasping for anything right now. The Panthers love when Pittsburgh comes to town because it allows them to shoot all of their promotional videos for the following season, since it is the only game of the season with 60% or more attendance. Jagr always has a way of pissing off Sid, resulting in Crosby dick slapping Luongo, so be on the lookout for that tonight. Our gameday poll man is busy with real person work or something, so there will not be a poll today.

Not sure we will get the same response as we did from Ottawa. The Rat Trick runs Disqus, but after a quick look at past posts they seem to be dead. Maybe if someone tries they can let us know in the comments how it worked out.

Alternatively, since the Rat Trick hasn’t been updated in months, we can sign up at HFBoards and try their gameday thread, here:

THE…”Work is FRKen killin me”… “Eat a stale son-of-a-bitch candy bar while running to the next meeting at lunchtime” …GAMEDAY POLL : (

How many hat tricks will Dubble J and company skoar on us tonight?