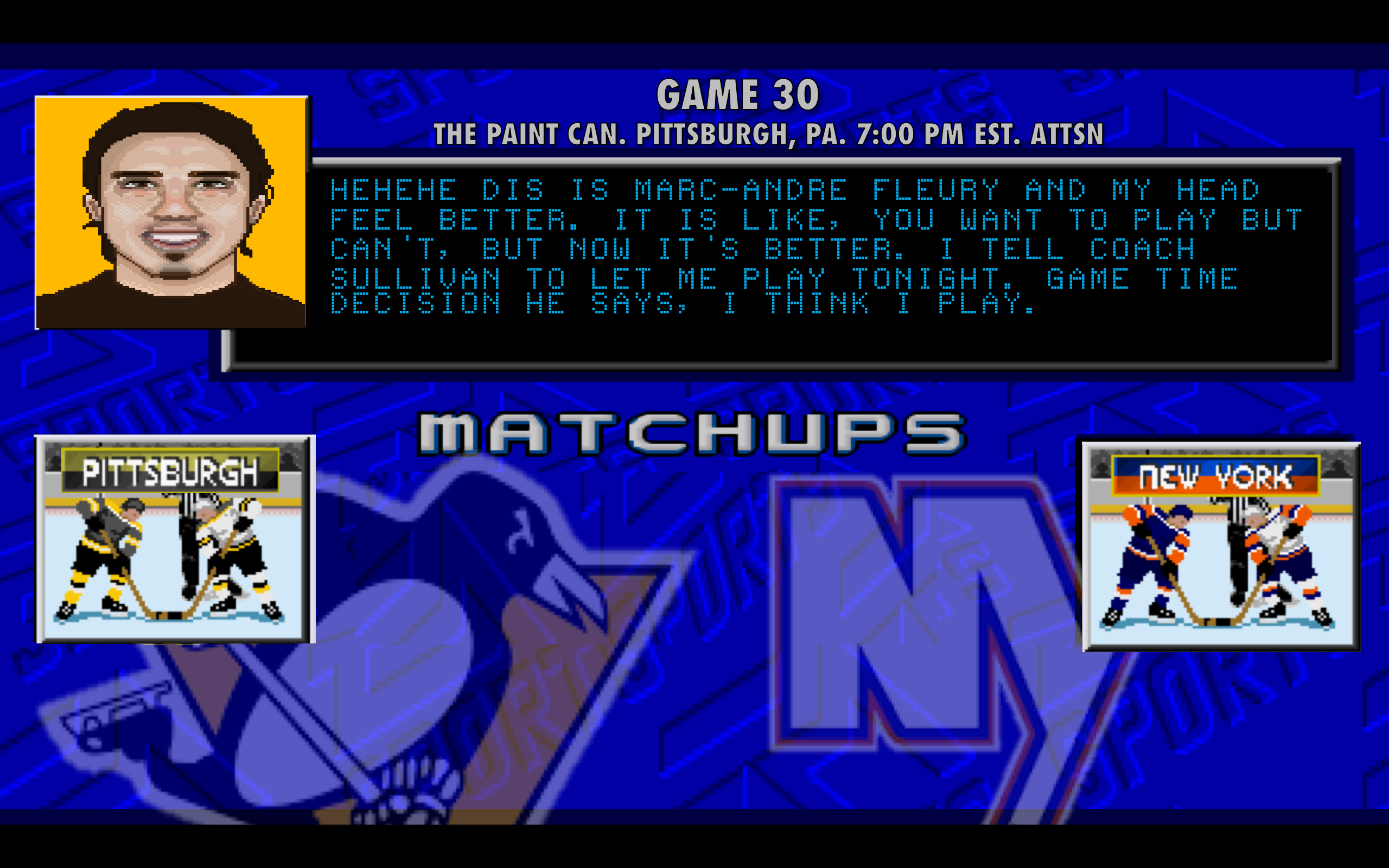 The Penguins move on from one New York team to the next as they prepare for the Islanders tonight. Just like every team not named the Philadelphia Flyers the Islanders are stuck right in the thick of the Metro Division madhouse. The Islanders are currently sitting in third in the division with a 16-9-2 record thanks to a recent 7-3-0 stretch that has seen the team personnel start to click. New York fell 6-2 to Tampa in their most recent game on Tuesday night marking the second time in the last three games that they’ve allowed 6 goals.

The Penguins are also coming off a Tuesday night loss after falling to the Rangers 4-3 thanks to hitting approximately 36 posts. The loss took the Penguins record to 15-11-3 which is good enough to fall in the last wild card position in the East, 3 points behind the division leading Devils. The biggest question mark for the Pens is the health of Justin Schultz, who suffered an injury in the Ranger game and was determined to be “possible but not probable” in tonight’s affair yesterday by Mike Sullivan. The body of Schultz will most likely be filled by Frankie Corrado, but the loss of Schultz is one the team will have a tough time overcoming. As the team is still searching for a tight-knit defensive group, an injury to Schultz was not the best thing to happen. The team seems to be trying to move another defender up from Wilkes-Barre based on the waiving Greg McKegg yesterday, a move that could make you question the seriousness of Schultz’s injury.

The Islanders have responded well under first year coach Doug Weight offensively, but still have some issues defensively as defined by their 99 goals for (league average is 82) and 91 goals against (league average is 82). Just like their overall goal scoring numbers the Islanders are offensively skewed in special teams too, where they boast the leagues 8th best powerplay clicking at 21.74% while ranking 30th in penalty kill success with a rate of 75%. The Penguins 4th best powerplay (25.68%) could be a huge factor in this game if they are given opportunities. Since we are on these stats for those interested the Penguins have the 20th best penalty kill with a 78.76% success rate. 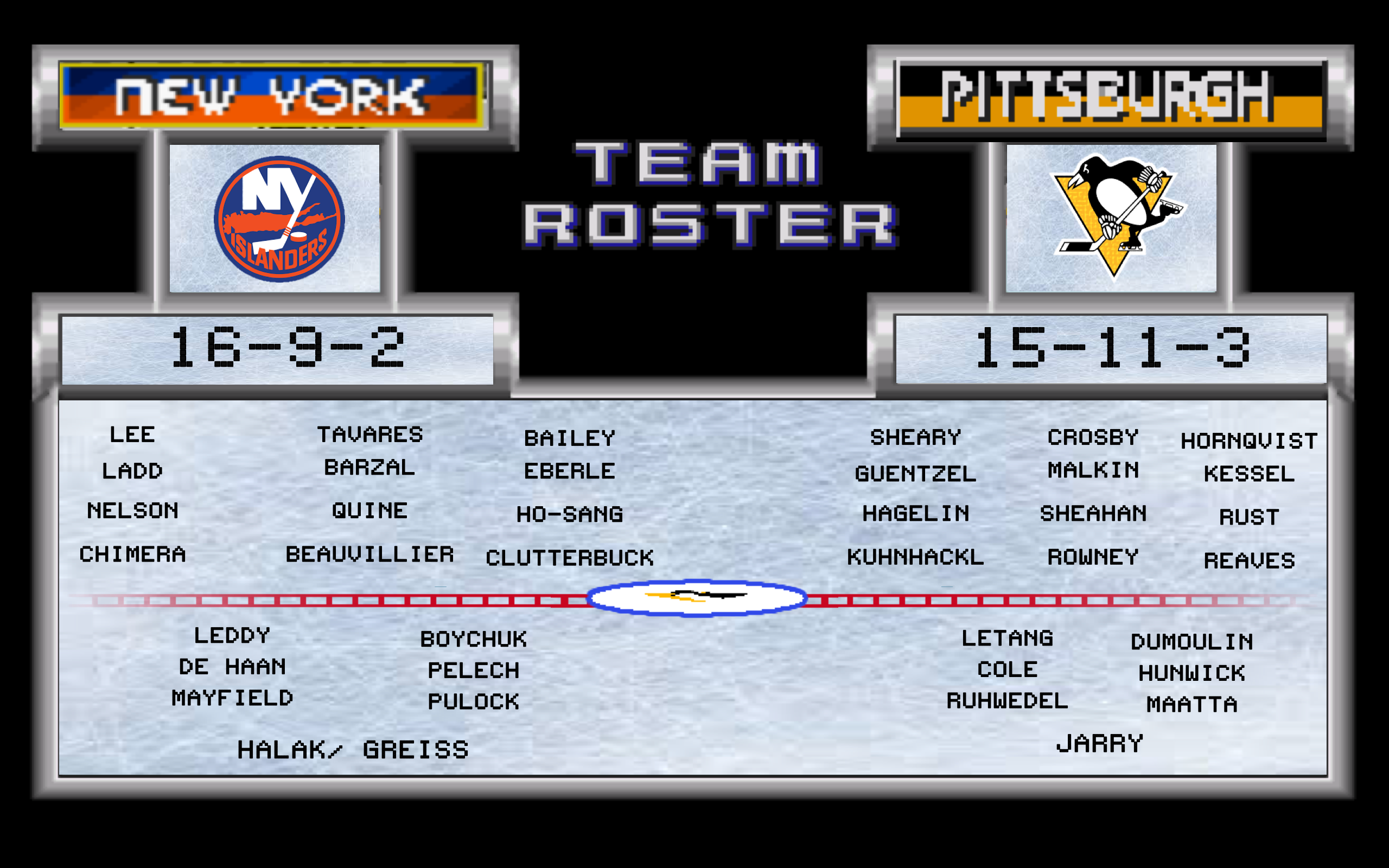 Schultz may be questionable but based on the language used I’m going to go ahead and scratch him. The team played well offensively against the Rangers and if a few shots were a quarter of an inch, Charlie the other way it would’ve been a different outcome. Based on their performance in the last game and Conor Sheary finally scoring I don’t expect to see any shuffling of the forwards in this game. This tilt feels a lot like the last game in that it is a division foe with a similar record to yours, they are good measuring games. The Islanders group of forwards will test the Penguins defense, and more so the Penguins lack of defensive back checking by the forwards; if the Penguins forwards get lost in the play the same way they did against the Rangers then they will be relying on Tristan Jarry to steal them the game.

John Tavares leads the Islanders in goals (17) and points (31) as he has enjoyed having a winger that can actually finish his setups in the form of Anders Lee (16 goals, 12 assists). The second line doesn’t get any easier to play against with off season addition Jordan Eberle (11 goals, 9 assists) slotting in nicely beside rookie center Mathew Barzal (7 goals, 19 assists). It’s the bottom 6 that hinders the Islanders from reaching that next level, but they are only a good trade or two away from being able to boost those lines if Garth Snow can find the right person. If the Islanders can somehow add a 20-25 goal scoring winger to their bottom 6 (not the easiest thing to do by nay means) then look out.

FOR PITTSBURGH:     THE FORWARDS DEFENSE

I know I have been harping on this for awhile, but if the forwards continue to back check like peewee players the team is not going to win many games against Metro division teams. You could create the best defender in history, also known as Drew Doughty (lol), and even then you will give up goals on odd man breaks without forward pressure. I assume the video team has gone over this with the forwards, though it has been an issue all season that has been masked by playing teams with weaker transition games. If the forwards get caught slacking tonight, the Islanders speed is going to create a long night for Tristan Jarry.

The 2015 first round selection his doing everything the Islanders had hoped for when they traded up for the pick. Just last week John Tavares said on MSG TV that Barzal does things in the game that not only leaves him in awe but also makes him jealous of. Talk about high praise, that isn’t some cardboard “he’s been great for us” comment we are used to as NHL fans. To have John Tavares say he is jealous of something you did is quite the compliment. Tavares was very close to holding this spot in the gameday by the way, he is playing some of the best hockey of his career this season:

As good as it gets @91Tavares #Isles pic.twitter.com/UX47YMl6Vn

With Tavares and Barzal playing great hockey, it’s up to the Penguins defense to shut them down tonight.

The Tuesday night game against the Rangers was a pretty entertaining matchup that the Penguins hopefully learned a thing or two from. Tonight it is about fixing your mistakes, mainly defensive responsibility by the forwards, while not losing the compete level. The Islanders are playing very good hockey at the moment which makes this a good test for both teams. The Penguins would love nothing more than to get retribution for some of those Tuesday night posts, and the Islanders have been known to have more than one game finish 6-5. Buckle up sunshine, this could be a fun game.

Now that I have said that it will most likely be a 1-1 game decided by a shootout with a 2 hour change of glass delay midway through the second period.