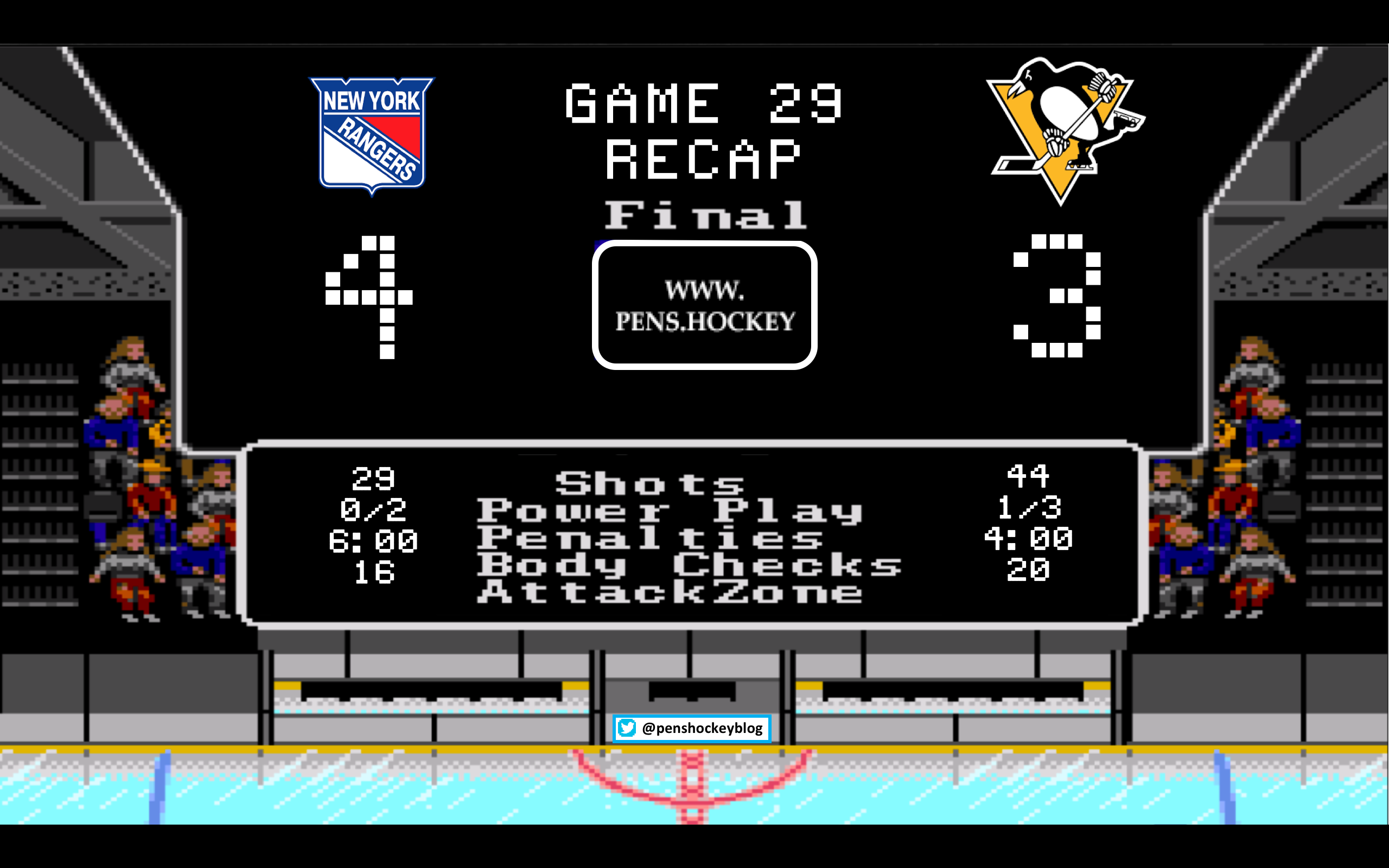 Before the game started it was announced that Henrik Lundqvist would be out with the flu, also known as Pittsburghownsyouinpittsburghitis, and back-up Pavalec would be in net…

Both teams resembled hockey teams to start the first, which was a dramatic improvement from the last time these two teams met. The story of the first period was Tristan Jarry, who bailed his team out time and time again in the first, including an 80 foot break-away in the first four minutes

It is almost like Jarry plays chicken with the forwards, stubbornly refusing to move which eventually results in the forward running out of room and options. Jarry was a smooth criminal in the first, consistently using his great positioning to thwart away Ranger opportunities. As all great teams do, the Penguins paid back their goaltender:

So Patric Hornqvist has zero defenders between him and the goalie, and Conor Sheary has three…and Sheary scores because hockey makes sense. Nice to see Sheary get back on the board:

Kind of crazy that Sheary has been goalless in 13 games and still almost has 10 on the year.

The Rangers would score less than two minutes later when a guy literally named “Boo” would score his first NHL goal. Boo.

The Rangers would get a late penalty after Ian Cole got called for something, no word yet on if Cole will be benched for the next game. No dice on the powerplay for the Rags and we ended things at 1-1.

Much like the Rangers had the best of the scoring opportunities throughout the first period the Penguins took their chances in the second. Naturally Pavelec decided that tonight would be a great night to remember he is supposed to be an NHL goalie and he stood tall early, though he looked completely confused about what he was supposed to be doing most of the time.

There was just a feeling that the Penguins were brewing up something big, but first it was Tristan Jarry once again standing on his head on a Ranger 2 on 1 to keep the team tied. Not long after the save the Penguins found themselves in a good series of offensive zone cycling, and the biscuit landed on Phil’s stick, and you know how that ended:

Three great things on this play: first Kessel recognizes the empty ice and takes advantage of it, secondly Jake Guentzel makes a perfect pass to the tape despite being pressured agains the boards, third Rick Nash sucks at defense.

The Penguins would get a powerplay opportunity and despite possessing the puck for nearly the entire two minutes they would come out of it with just a post to their credit. Missed opportunities are usually gained opportunities for the opponent, and this one was right on cue.

The Rangers would tie the game up following an odd man break that saw Jarry make the initial save but fail to come up with the second one. During the breakout Skjei would slash Malkin’s stick out of his hand, which probably should’ve been a penalty if you’re getting technical but the Penguins get all of the calls so it wasn’t, and Fast was able to enter the zone under the radar since Geno had to go grab a new stick.

Zuccarello would beat Jarry  5 minutes later with a shot that Jarry most likely wants back. Neither team could find the net the rest of the way though the Penguins hit multiple posts in the process

23 shots in the frame for the Pens with just one goal to show for it, while the Rags get 2 goals on 8 shots; of course it isn’t hard to score 2 goals on 8 shots when 7 of those shots came off of odd man breaks. The Penguins defensive responsibility (as a whole, not just the defenders) left a lot to be desired through two periods.

Early in the third they would get their third power play opportunity, and this time they took care of business.

Killer pass by Geno through the zone to spring Hornqvist, who has conveniently found a scoring touch in his last year of his contract that has put him on pace to rival his best offensive season. Funny how in the previous two powerplays the Penguins controlled the puck in the offensive zone the entire time and the one they score on is through quick transition where speed burns the defense.

With the game tied everything seemed to point in the Penguins favor, except they really like giving the Rangers 2 on 1 opportunities. Eleven minutes into the period the Rangers got their 127th odd man break of the game, and a fortunate bounce made it a 4-3 game.

The Penguins would try their best but you know how back-up goalies play when the Penguins get over 40 shots, so yeah the tying goal wasn’t happening. Malkin hit another post though.