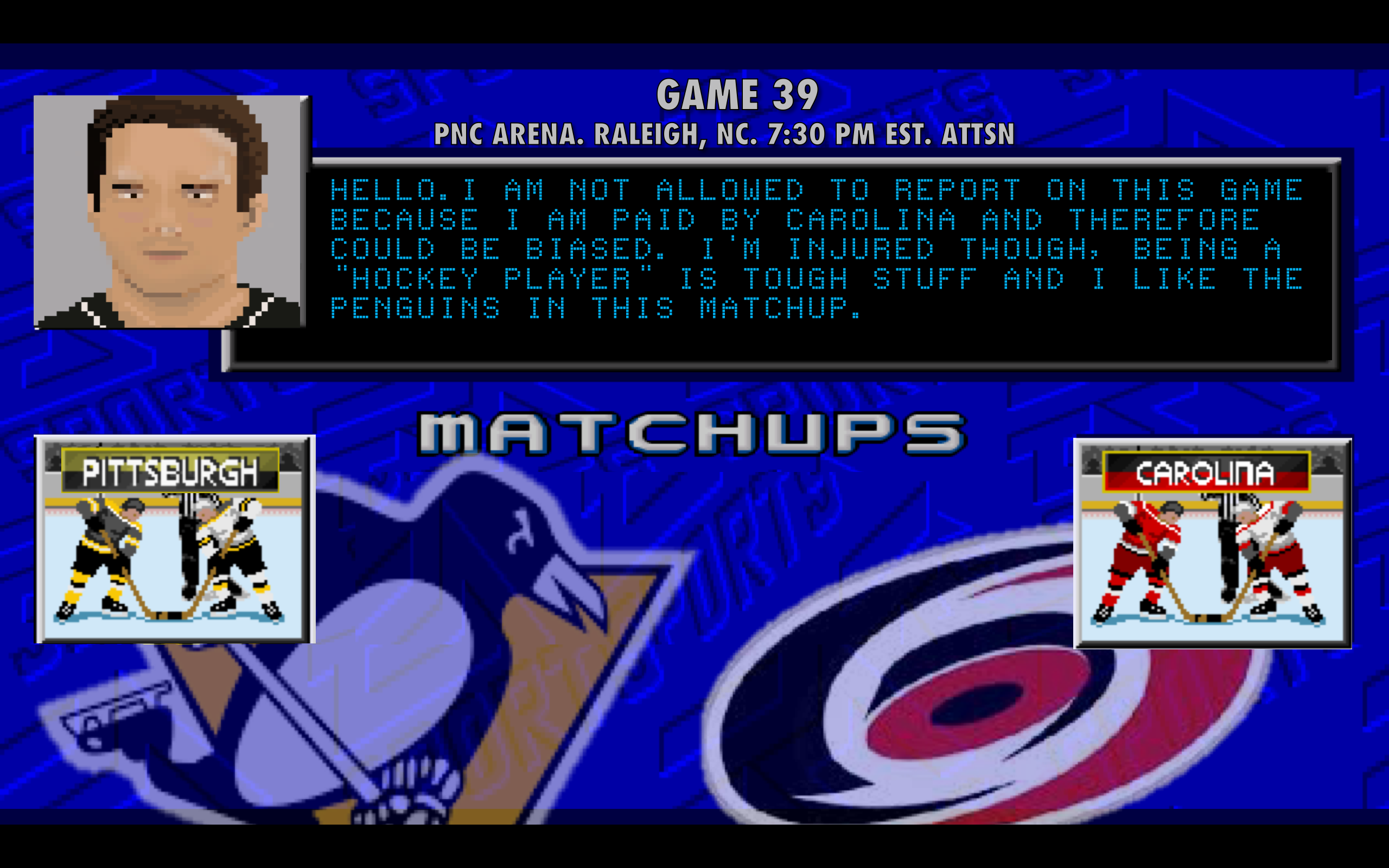 The Penguins take their show on the road following a spirited come from behind victory over the Blue Jackets on Wednesday night, and are rewarded with another “4 point game” against another division foe. The Hurricanes were originally a dark horse to make the playoffs until the New Jersey Devils decided they wanted to win this year. Carolina isn’t a bad team by any means and currently find themselves tied with the Penguins in the Metro division, with a technical lead because the Pens have played two more games. Everyone’s favorite Metro team to forget currently sits with a 17-12-7 record, have won 3 in a row, and are 6-2-2 in their last ten. One thing that has kept the Hurricanes ticking this season has been their resiliency, or perhaps young ignorance, demonstrated perfectly by rattling off three straight wins following an 8-1 loss to Toronto. Overall the month of December has been a divided one for the Canes as they went 2-3-2 in the opening 7 games of the month and 5-1-0 in the following six for an overall record of 7-4-2 with two games remaining in the month (including tonight). The month of December has been a bit more bumpy for the Penguins, who started it off with back-to-back wins against Buffalo followed by a 4-6 stretch in the next ten to stumble to a 6-6-0 record on the month with two games remaining, losing Justin Schultz and Kris Letang in the process.

The main struggle for Carolina has been scoring goals, the team currently has 99 goals for, almost 10 below the league average of 108. Defensively they have allowed 107 goals, one better than the league average of 108. While we are here, the Penguins have scored 107 goals and allowed 121. Another struggling aspect for Carolina has been the penalty kill which is still adjusting thanks to so many young defenders, the kill rate is currently at 77.78% which puts them 25th in the league. With this knowledge the Penguins would be wise to continually drive to the net tonight in hopes of drawing penalties so that their 2nd best powerplay in the league (25.2%) can get to work. The Penguins have the full special teams advantage, and I wanted to use this as a chance to give some praise to the penalty killers. You may remember that the Penguins penalty kill was awful at the beginning of the season, and rightfully so considering they had to replace Nick Bonino and Matt Cullen as well as some key defenders. The PK unit has adjusted and grown, and currently sit tied for 17th in the league and 0.2% away from the top 15 at 80.6% just 5 weeks after ever reaching 80% seemed unlikely. So with that, kudos to the PK: Remember when some people thought trading Staal was a big mistake? Captain Jordan Staal is currently centering the top line for Carolina and has contributed 10 goals and 12 assists this season. Staal recently played in his 800th career game, and would you believe me if I told you he doesn’t have 200 goals yet? 800 games played, 197 goals, 261 assists, 458 points. If those numbers don’t make you question things, Staal had 120 of his 197 goals when he joined Carolina. Here is the current breakdown now that he is in his 6th year with the Hurricanes, the same amount he played in Pittsburgh: 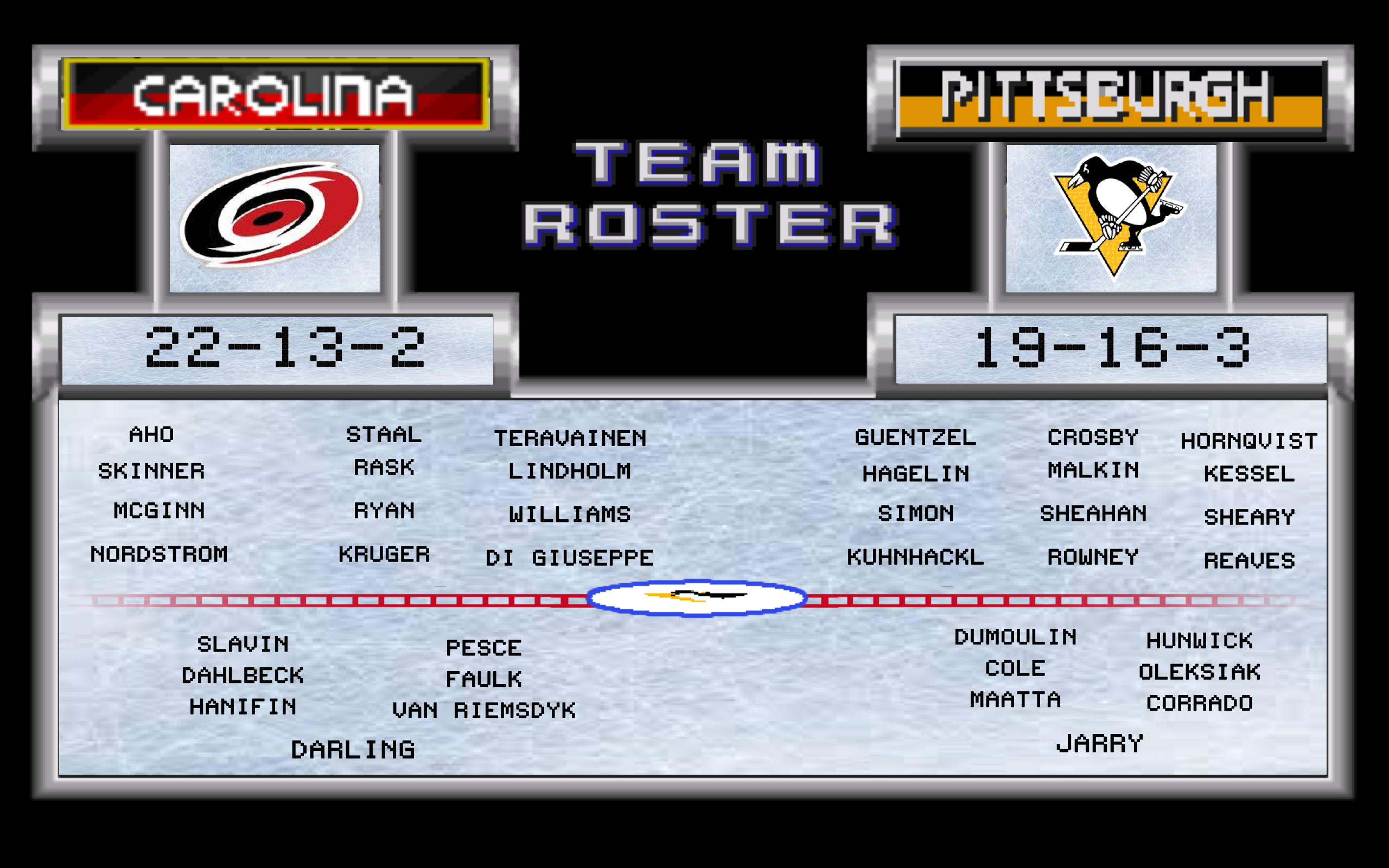 I’ve beat Staal enough, not sure why he is the top line center but whatever I guess it is working in some way. As for the Penguins, it’s that time of year again:

All three players placed on IR was not something anyone expected but what can you do? The Penguins call up Casey DeSmith to back-up Jarry, and DeSmiths back-up in WBS Micheal Leighton is also injured leading the Baby Pens to sign Adam Morrisson and Anthony Peters to PTO’s just so they can have goaltenders in the middle of the season, what a mess.

The lines in the graphic are those that Sullivan used in practice yesterday and I would expect them to stick for the most part. I will admit that this was the first time this season I was surprised that Daniel Sprong wasn’t called up to help replace Rust. The biggest thing to look for with the recent call ups is how well the forwards get back to help out their defenders. The team is already down Schultz and Letang, and now have to play Corrado instead of Ruhwedel so the forwards need to help these new pairings out as much as possible.

Geno was on a war path against Columbus and finished the game with 3 points. There are a few teams that Malkin always seems to elevate his game against, and Carolina in 2009 will never be forgotten.

All these years later and this shot still gives me chills. The scariest thing is Evgeni Malkin, 7 years older from this goal could drop this exact goal tonight. Not bad for a guy not in the top 100 players.
FOR CAROLINA:     JEFF SKINNER

Skinner is currently second on the team in points, just three behind Teavu Teravainen, but leads the team in goals with 12. On top of this Skinner likes to show up in games against the Penguins and should draw the Dumoulin assignment tonight. Of course this makes things tricky since he is on the Canes second line, but in my opinion he is the biggest threat offensively on the roster.

If the Penguins can actually remember that the first period counts tonight that would be a good thing. Despite the injuries and call-ups that forwards are generally the same, and if the Penguins can play like they did in the final 40 against Columbus then this could be a game we remember for awhile as the time the Penguins started looking like the Penguins this year. If they don’t, then we will be scratching our heads as we wake up in the morning to the Hurricanes being two points ahead of Pittsburgh and only Philadelphia below in the standings.