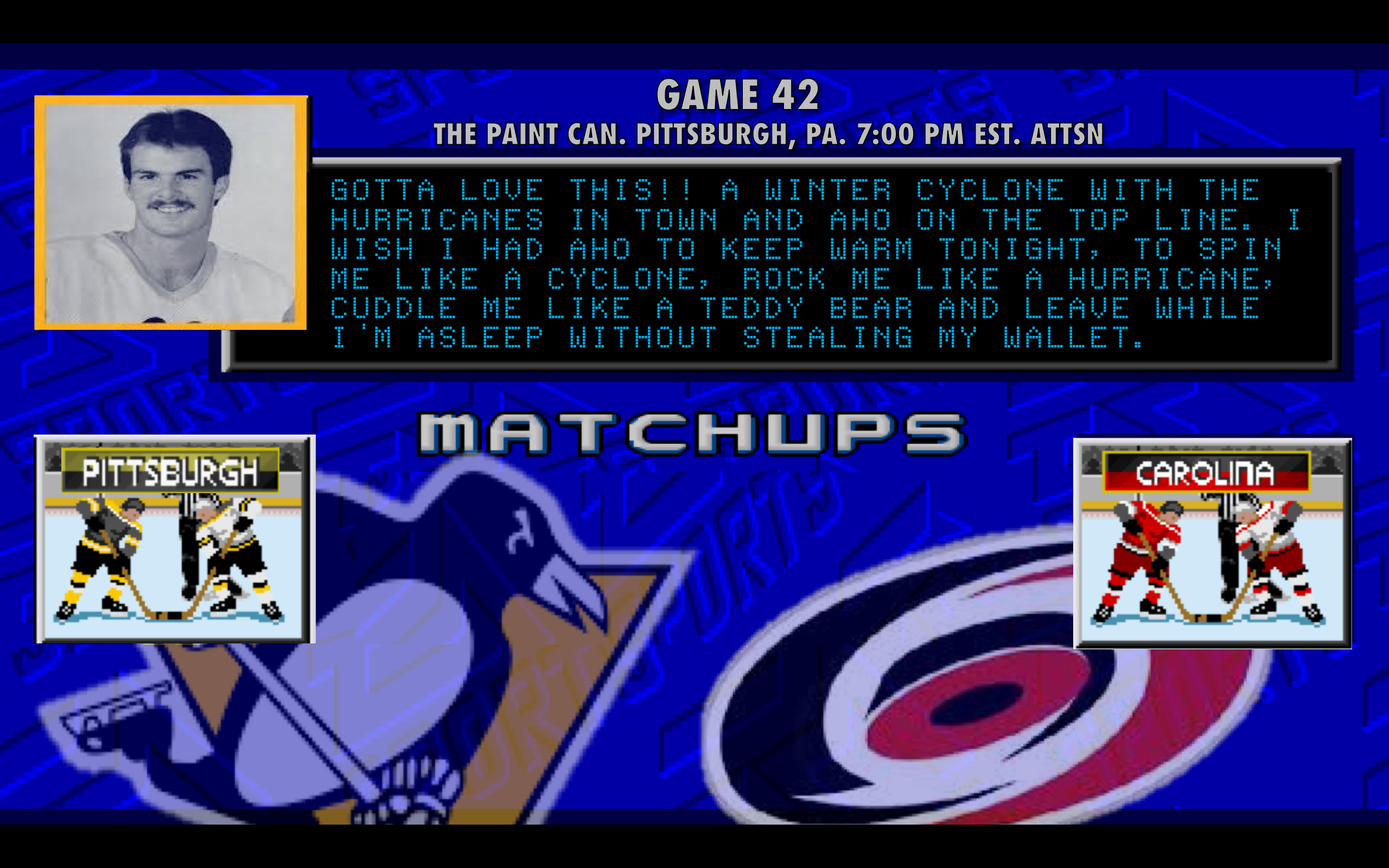 For the first time this season the Penguins had a higher chance of missing the playoffs than making it, and the loss that did that was to the Carolina Hurricanes. Since that loss the team closed out 2017 with a dud in Detroit and then opened up 2018 with a bang in Philly, one that the players are still getting STI testing for. We’ve spilled out the implications for this game in the recap yesterday, so a quick recap: the Penguins need to win. 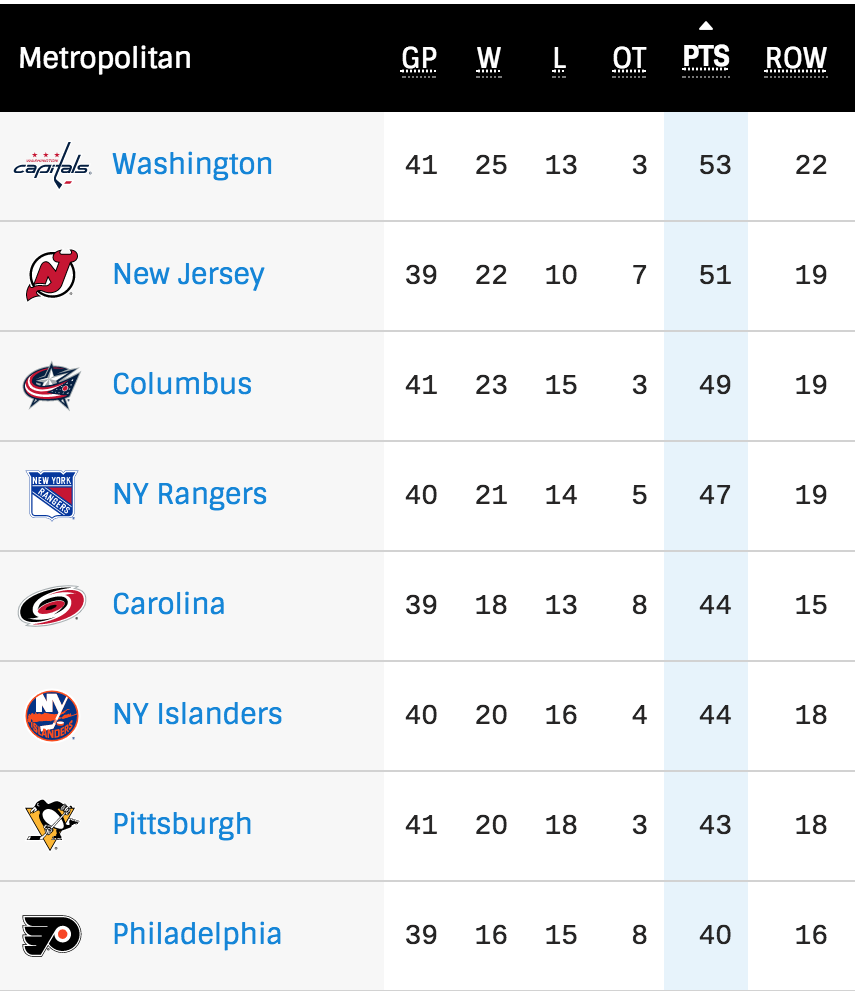 Pretty straight forward here, a regulation win puts the Penguins ahead of Carolina and a loss gives the Hurricanes a 3 point advantage with two games in hand. It is important to note that the Hurricanes have 3 fewer regulation and overtime wins than the other teams fighting for the Wild Card which is the first tie-breaker at years end. The Islanders are also playing tonight against the Flyers, and believe it or not the Flyers have actually been the better team between the two; the Islanders are currently on a 3-6-1 slide while Philly is chugging away at 5-4-1. The Penguins play the Islanders tomorrow night in Brooklyn, so now you can really see the implications of these two games. Two regulation wins and the Penguins are in 5th in the Metro, which will be the second Wild Card spot by Saturday morning. Two regulation losses and the Penguins will be 3 points out of the Wild Card as the best case scenario, and potentially 5 points out worst case. The Penguins need to remember how embarrassed they were to call what they did in Carolina a hockey game and play like they did in Philly tonight.

Carolina has been building this team for awhile and to his credit Ron Francis has done a great job so far. That being said they are also using the 2017 Ottawa Senators method of racking up overtime losses to build their points total. For example, the Penguins are 12-9-3 in one goal games this season, if they managed to tie half of those losses up and then lose in overtime the team would currently be sitting with 4 or 5 addition points, giving them 47 and tied with the Rangers. The Penguins are a better team than the Carolina Hurricanes, and they need to play like it tonight regardless of who is filling the holes in the roster left after the Philadephia game. 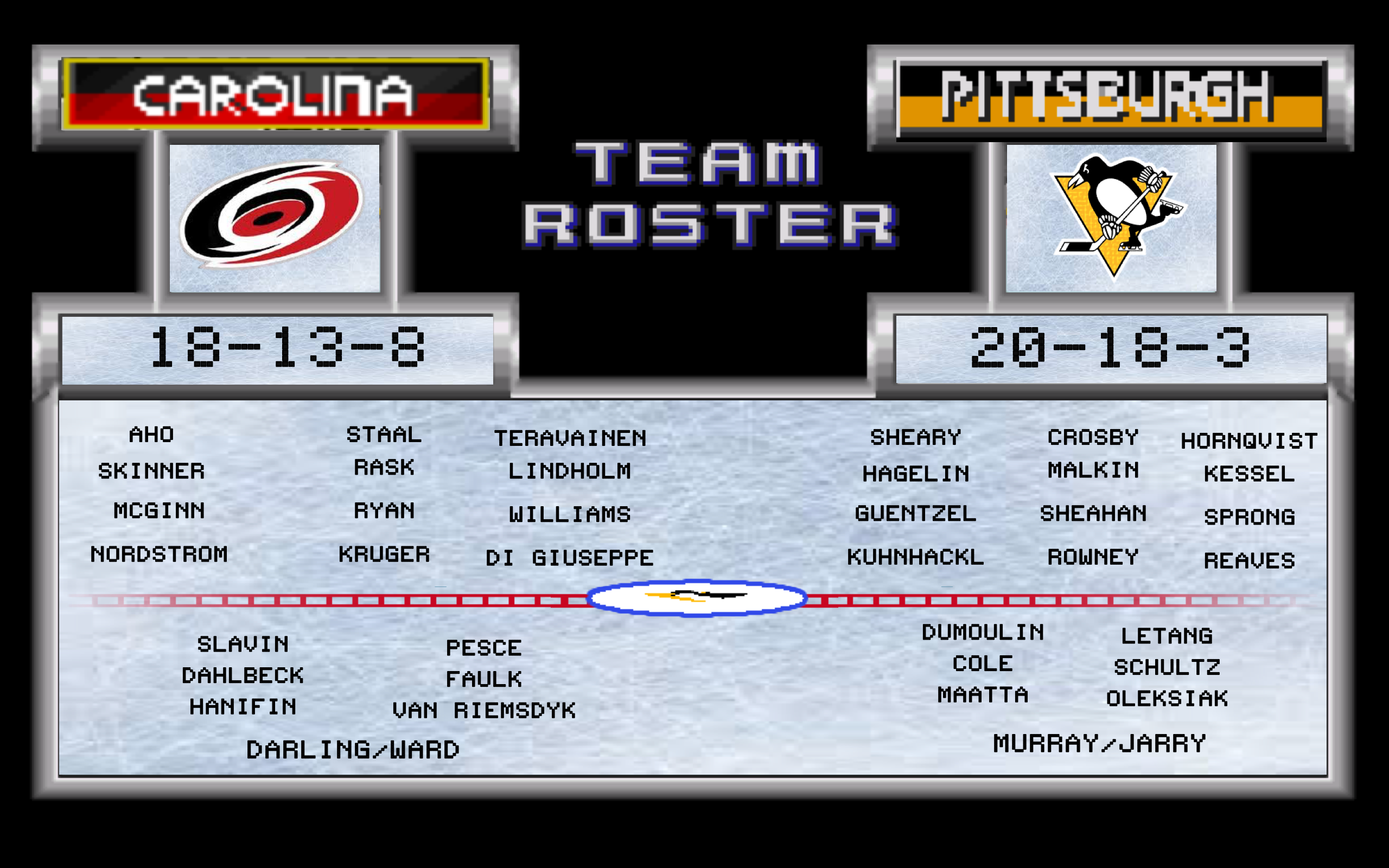 I left Rowney, Dumoulin and Jarry in the graphic because the Penguins didn’t make any announcements yesterday in regards to their respective injuries. The team did scratch Casey DeSmith in Wilkes-Barre last night and signed 37 year old Sebastian Caron, yes the one that played for the Penguins from 2002-2006.

to a PTO in order to play back-up last night and save DeSmith from potential injury. Caron backed up Anthony Peters, who was signed to a PTO last week following the injury to Michael Leighton.

In regards to the other injuries it isn’t difficult to imagine that the team will replace Dumoulin with Hunwick if they have to, and potentially Simon for Rowney as the fourth line center. It also wouldn’t be too surprising to see the team recall Greg McKegg to fill in for Rowney since they know he will clear waivers instead of risking another player clearing.

The use of either Simon or McKegg on the fourth line might result in the line getting less time on ice tonight which I feel is not in the Penguins advantage. In their last 4 games the Penguins have had two really determined wins, against Columbus and Philadelphia, and two complete duds. Something intriguing I find about these four games and their outcomes is the time on ice of Ryan Reaves: CBJ (7:24, win), CAR (5:13, loss), DET (4:04, loss), PHI (8:42, win). I’m not saying Ryan Reaves is winning these games. I am saying that when he gets closer to his career time on ice average of 7:53 instead of his season TOI average of 6:40 it is more rest for the rest of the team. This got me thinking about the Penguins record when Reaves gets closer to his career average so I did some digging. The Penguins are 9-7-2 when Reaves gets over 7 minutes a night so far this season, however 4 of those losses were the disasters against Chicago, Winnipeg as well as those awful back-end games against Tampa. Additionally, the Pens are 5-3-1 when Reaves gets 8 minutes of ice time (2 of the 3 losses were the 10-1 Chicago loss and 7-1 Winnipeg loss). Removing the two games the entire team played like steaming shit, the team is 5-1-1 when Ryan Reaves gets 8 minutes of ice time. It’s not because he is a difference maker, it’s because 8 minutes compared to 5  is a full minutes rest for each of the 3 lines above him throughout the game. The team has played 41 games, and they have played Reaves for more than 8 minutes in 9 of them. I wouldn’t mind seeing the forward ice time distribution we saw in Philly last game.

Also, Oskar Sundqvist is currently chilling with 0 goals and 3 assists in 29 games played and Klim Kostin (31st pick traded in Reaves acquisition) has 2 goals and 9 assists in 26 AHL games. Thanks to Penguins Jesus on Twitter for doing the research on that one, though I did confirm. Here’s to the other Penguins Jesus to get the job done tonight:

The implications in the standings are evident, we as fans can feel how important this game is so you know the team feels it as well. They started the New Year off perfectly as far as I’m concerned, and tonight would be the perfect time to continue climbing their way up the standings. A lot of people have counted the Penguins out. A lot of those same people also told you the team stood no chance without Kris Letang last April. The climb to the playoffs began when the calendar changed and a year that hasn’t been printed on the Stanley Cup was revealed. The Penguins names are represented in Silver under the numbers 15, 16, and 17. They started their climb to put 18 in silver on Tuesday, and as we know all this team needs is a playoff position. Even the Tampa Bay Lightning would shudder a bit if they knew they were facing the Penguins in the first round. If they do their job that will be the position the team is sitting in come Saturday morning. So let’s fucking do it.