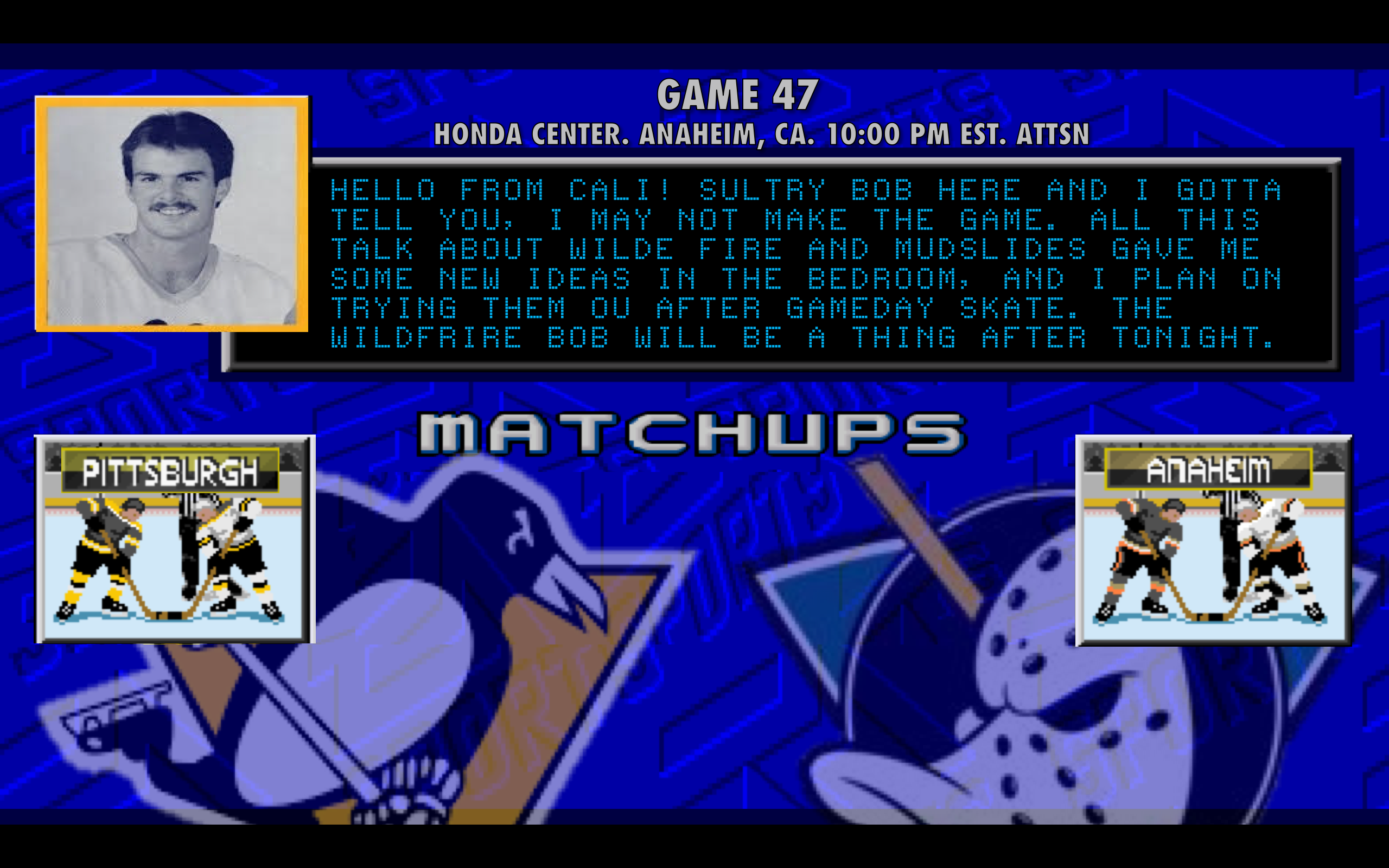 From the perspective of a Penguins fan, the Pittsburgh Steelers were probably a week too early for being eliminated from the playoffs.  With the Penguins on a three-game road trip in California this week (meaning a couple of 10:00PM EDT starts and an 8:00PM EDT game against the San Jose Sharks on Saturday), a bunch of late games means the unofficial start of Penguins season won’t begin until next week.  Penguins season is that time of year when Pittsburgh sports followers forget about the Steelers and Pirates (particularly easy with the Buccos beating the Pens to trading a Cole out of town, and with Andrew McCutchen now in San Francisco)

and focus solely on the ice for a few months.  It helps that the Penguins are turning things on of late, winning five of their last six with massive contributions from Sidney Crosby, Evgeni Malkin, and Phil Kessel.

WARNING: THESE TWO GUYS MAY BE TITS

It’s pretty evident that the coasting the Penguins did in the first half of the season is well and truly over.  The power play, which was already the League’s best, has gone 10 for 29 in the last ten games, a rate of nearly 34%.  The penalty kill has allowed just two goals in the same span and only four since December 1.  Their goal differential is -6, a far cry from where they were a month or two ago.  They’re getting even strength goals (finally!).  Even with the dominance of the three-headed monster, in the last ten games goals have come from up and down the lineup; only Olli Maatta has played all ten games without getting a goal.

WARNING: THIS GUY MAY LEAD THE CHEL IN PP POINTS (not an all-star tho)

This time last month many Penguins fans were heading for their local bridges, content with thinking that Crosby was washed up, Kris Letang needed to go, and the team made a mistake in trading Marc-Andre Fleury and keeping Matt Murray.  Well, two out of three ain’t bad.  (I’ll let you decide which is the outlier, although it could be none of them!) Now, the Penguins are back to their deadly-looking ways as they peer hungrily up the standings at the Blue Jackets, Devils, and Capitals.

WARNING: THIS GUY MAY BE 4TH IN TEAM SCORING

Pittsburgh’s first foes on this trip to the Golden State are the Anaheim Ducks, who we last saw two days before Christmas finishing off a six-game road trip with a 4-0 shutout of the Penguins.  Since then the Ducks have gone 4W-3L, a reflection of their current state in the Pacific Division, which is smack-dab in the middle of it, in mediocrity-ville.  Okay, to be fair, they’re only two points behind the Penguins in the League-wide standings, but while Pittsburgh is currently the #1 Wild Card seed in the Eastern Conference, Anaheim is two points out of the Wild Card race in the Western Conference, with Colorado flying past them and Chicago and San Jose ahead of them as well.

WARNING: THIS GUY MAY BE FROM PITTSBURGH

The Ducks have the eighth-worst offense but the eighth-best defense in the League, a goal differential of -1.  Their power-play is tenth-worst but their penalty-kill is fifth-best.  Games against the Ducks are typically low-scoring affairs; the combined goals scored per Ducks game is third-lowest in the League.  They have the second-best save percentage in the League.  One guy to watch out for on the Ducks is Ondrej Kase.  He notched a goal in the game against the Penguins last month and he had two goals and an assist against the Los Angeles Kings on Saturday.  If the Ducks need more offense, maybe moving him up the depth chart from the third line might help. 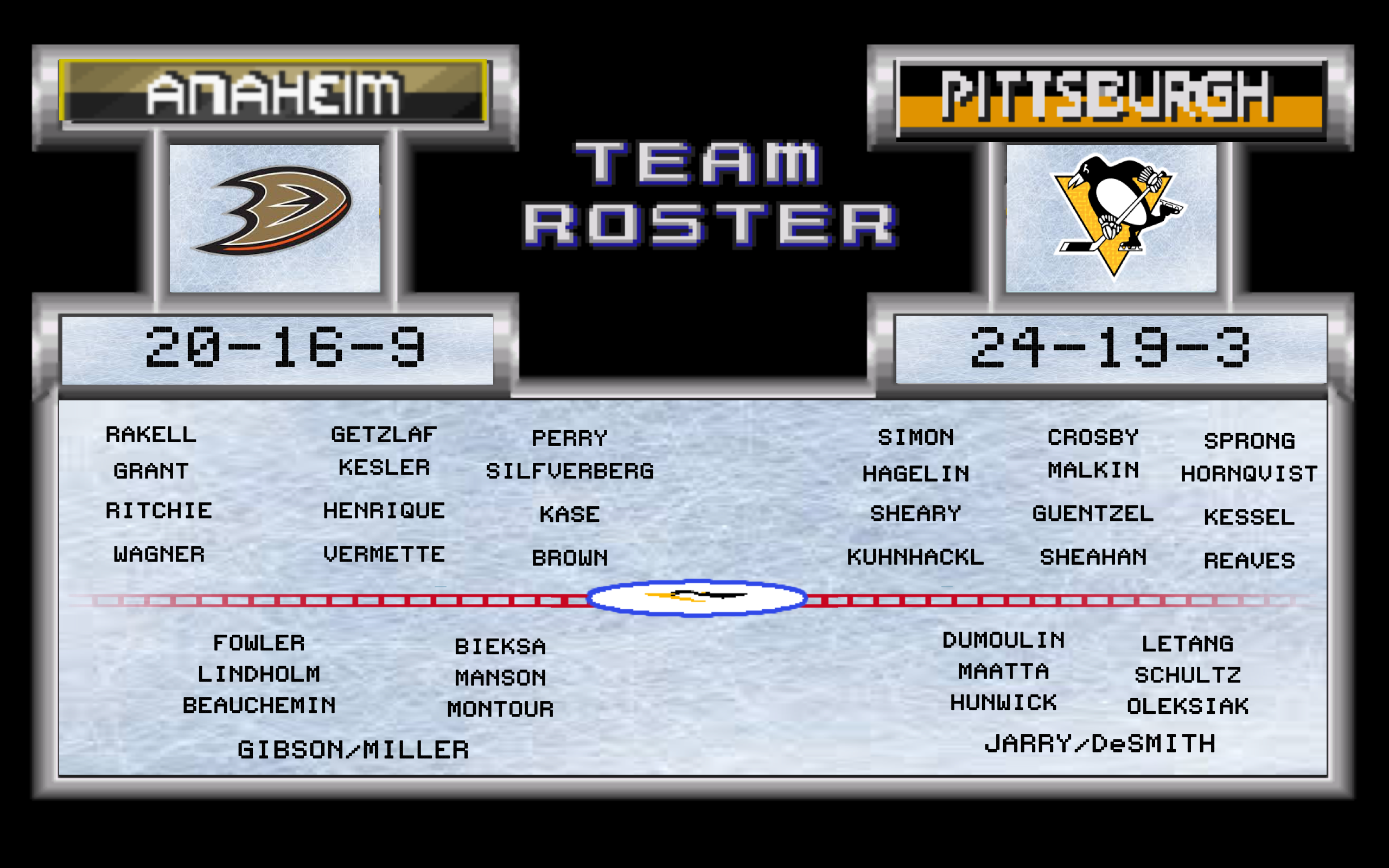 Judging by their extensive injury list and man-games lost number it has been open duck season all year long in Anaheim. The team is lead by Richard Rakell’s 32 points and no, neither the name nor the point total is a typo. Rakell is also the team leader with 15 goals scored. Other than that, just know that Paul Steigerwald is in a bar somewhere telling the poor soul beside him that John Gibson is from Pittsburgh.

Since there isn’t much else to report on in regards to the Ducks I figured I would help welcome the Steeler fans back to the world of Pittsburgh hockey. I am sorry for the early conversion, but at least there aren’t any fourth downs in hockey. To help ease the transition I made a quick list of 5 ways you can easily look like you haven’t missed a game.

1st half fourth and inches and the Steelers try a wide sweep? Letang’s fault. Onside kick instead of going deep? Letang’s fault. Traded Cole and Cutch away in the same week? You know it, Kris Letang. Anything and everything that happens on the ice is Kris Letang’s fault until further notice. If you want to join the exclusive of exclusives, you can even use #thanksletang at the end of your tweets after the Pens let up a goal

2.Matt Murray is not good

The last time you truly dedicated yourself to Penguin hockey you saw Matt Murray lead the team to its’ second Stanley Cup in a row. Unfortunately the fans have decided that that same man is no longer any good. In fact, his 22-9 playoff record coupled with a .928 save percentage and 1.95 GAA was just a benefit of playing behind good teams. Murray sucks. You personally think Fleury is better than Jarry, and Jarry is better than Murray. Murray should be competing with DeSmith for the backup gig. Sorry for the confusion, but what can you do?

3.The Penguins won’t make the playoffs

This one may come as a shock to you if you just looked at the standings, but it is true. In fact three weeks ago all the rage in the Pittsburgh media revolved around the Pens not making the playoffs and James Harrison stealing the Steelers signs when they play the Patriots in the playoffs. Now, many of those media members also told you the Penguins couldn’t win a cup when Letang’s season prematurely ended last year also, but again what can you do? Despite the teams flipping of the switch since that calendar changed to January, don’t get too excited, they are not allowed to make the playoffs. #thanksletang

Ever since Nick Bonino went for the Benjamins the team has needed to replace him, everyone knows it but you need to make sure that everyone knows you know it. Unless you are talking about the team needing a 3C (you must type it like that on social media) then your ranking as a fan will drop quickly. In fact, when the Pens release the lines they used at morning skate today you should reply saying the team will look really good once “we” trade for a 3C.

5.This could be the Capitals year

Tonight will be the 829th game of Crosby’s career and he enters it with 399 goals and 675 assists for a total of 1074 points. In addition to chasing down number 400, Crosby is also just 10 points shy of Alex Ovechkin’s 1084 career points despite playing in 137 less games. If Crosby continued his career averages and played those 137 games he would potentially be sitting with 465 goals and 786 assists for a whopping 1251 points in 966 games… damn you David Steckel.

It’s a 10:00 game, so get your work done today and do a bit extra so you can slack tomorrow.  Reach down and give your balls a tug because the Penguins are rolling right in time for Penguins Season in Pittsburgh. We ride together brother, we die together brother