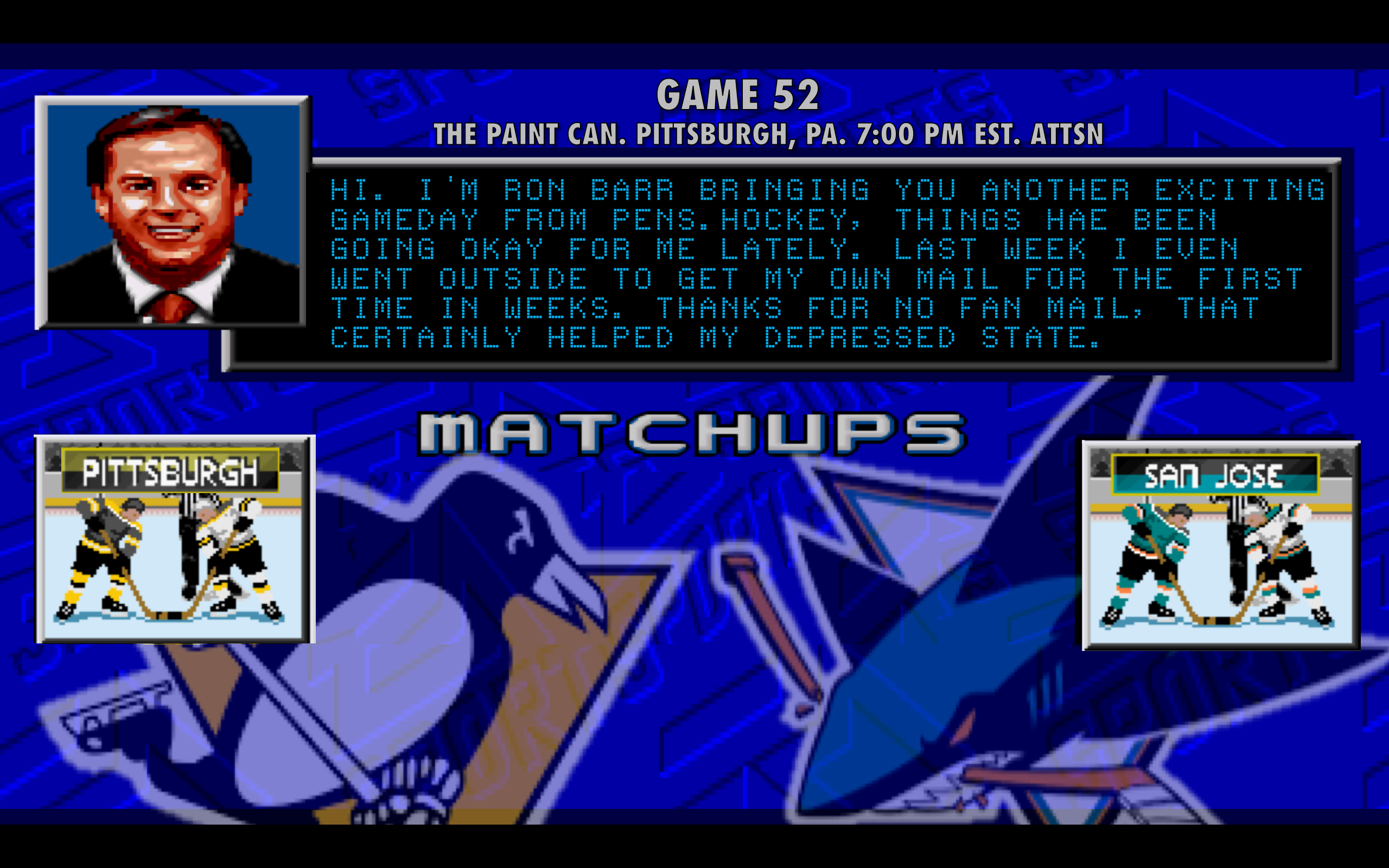 The Penguins are set for their rematch against the Sharks after a 4 day break for the All-Star weekend. If you recall, the Pens played in San Jose about a week ago and were completely stonewalled by Aaron Dell who finished the game with 76 saves or something. After the win the Sharks beat the Ducks the following night 6-2 before dropping consecutive games to the Jets (in OT) and the Rangers, a 4 game scenario that fits in perfectly with their 5-3-2 run in their last 10 which has roughly been their pace all season. Tonight is the 49th game of the year for the Sharks, and if we multiple this current 5-3-2 10 game stretch by 5 for 50 games their record would be 25-15-10 which isn’t too far off from their actual 26-15-7 overall record. San Jose currently sits 2nd in the Pacific, 9 points behind Vegas in first and 2 points ahead of both the Kings and the Ducks, two teams currently sitting outside of the Wild Card position.

Before we go any further in this gameday, let’s pour some out for our homie Double J who has most likely played his last NHL game at the ripe age of 78:

The next time we see Jaromir Jagr in Pittsburgh it will be him making the honorary puck drop and shaking Crosby’s hand 20 minutes after standing next to Mario Lemieux as the number 68 becomes the third number placed in the rafters at PPG Paints Arena.

Following the above mentioned loss in San Jose on January 20th the Pens returned home for wins against the Hurricanes and the Wild to bring their January record to 8-3-0 with tonight serving as their final game of the month. The month has already been the most successful for the Penguins who have also turned in records of 7-5-1 in October and 6-5-2 in November before stumbling to a 6-8-0 mark in December. Just looking at those totals also explains why the Penguins are playing their 52nd game despite most teams not even playing 50 yet; the team played 13 games in each of the first two months only to increase that load to 14 in December and we can only give thanks to the bye week and the All-Star Weekend for the Pens only having 12 matchups scheduled in January. The team only has 12 games in February though so the NHL thought it would be cool to make 6 of those back-to-back scenarios with 2 of the three weekend back-to-backs requiring travel between games. Despite this February will be the lightest game to off day ratio for the team this year and will be the final time Sullivan has multiple days off in a row to hammer home some final concepts because once March starts there is no time. March is the busiest month for the team, a month that sees them play 15 games in the 31 days, receiving a 2 day rest twice and one 4 day break.

This team has a lot of hockey to play and a short time to do so, in fact from today to the end of March the team would’ve completed 28 games in 61 days which breaks down to 33 “off” days. I will gladly take the team not being fully committed at Winnipeg in November if that is exchanged with them rolling out 9 or 10 wins in March. It’s not going to be easy, it never was with a back-to-back championship target on your back, but maybe waking up on January 1st out of a playoff position was exactly what the team, and especially the aging stars focusing on their dynasty, needed. 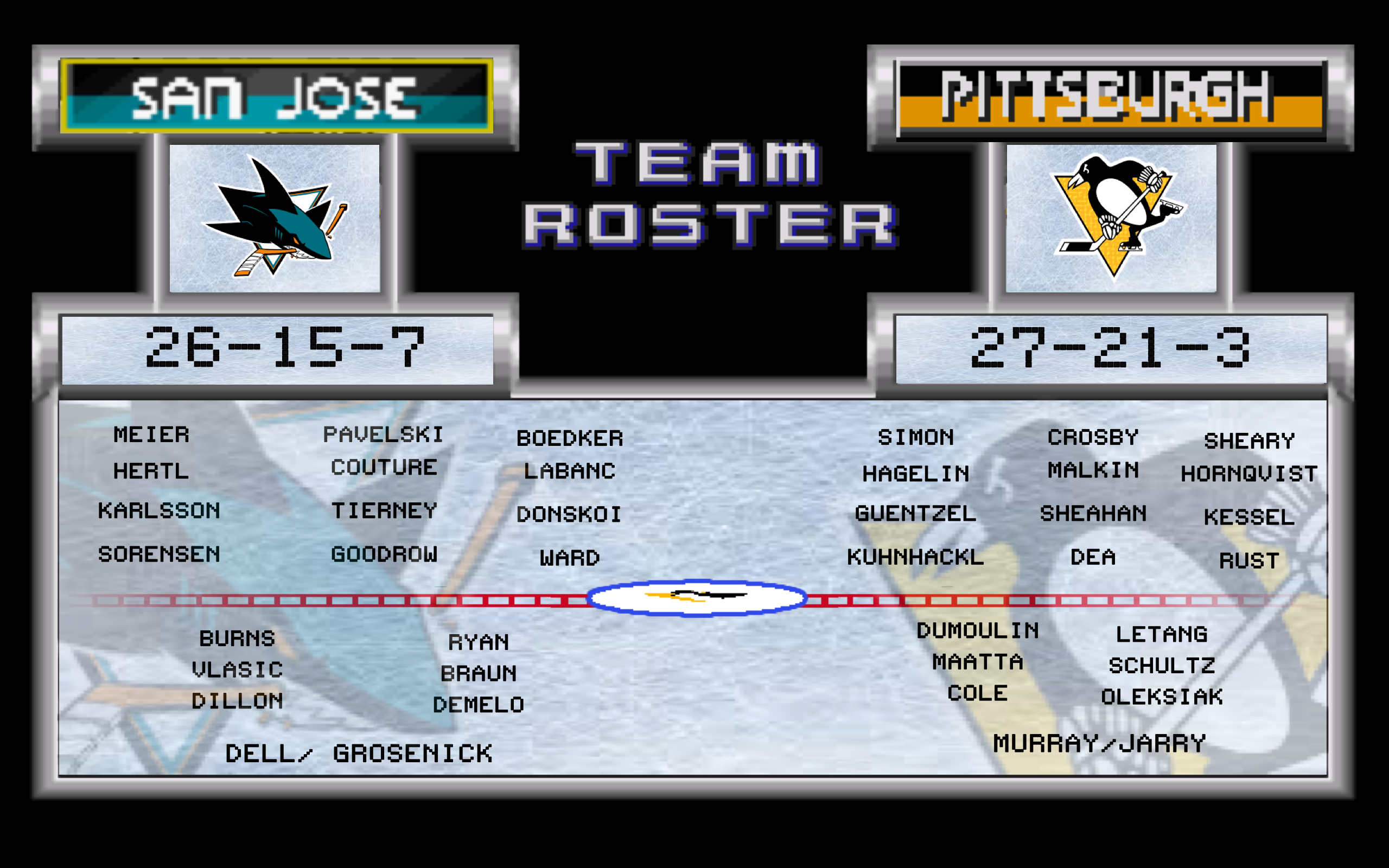 Before the break we saw the scratching of Ryan Reaves thanks to Bryan Rust returning to the lineup and no, that sentence shouldn’t make any god damn sense to you. In their last game against the Wild the pens were ferocious on the forecheck and turned in a ton of time in the “attack zone” which are two reasons why I would be shocked to see any changes up front. The team practiced with the same lines as in the graphic yesterday so I feel it is safe to assume these will be the starters. One thing that happened in that game that a lot of people aren’t talking about was the decision by Sullivan and Martin to evenly distribute defensive minutes. This is how the Penguins have used their defenders throughout the season curtesy of www.hockeyviz.com:

After finally realizing that maybe Letang is trying a little too hard making himself vulnerable to poor decisions the crew distributed the minutes as follows:

22 minutes for the top pairing, 20 for the second, 18 for the third. I am all for this distribution of playing time especially as the schedule starts to ramp up again in March. I’m sure jumping out to a 6-0 lead had a lot to do with playing time but I hope the team considers moving forward with this model. The only other position left to discuss is between the pipes, it has been 13 days since the passing of Matt Murray’s father and though he is with the team it is completely up to him to decide when he wants to return. The Pens don’t have a back-to-back situation until the 2nd and 3rd of February so the immediate decision isn’t too pressing for Murray and the Penguins.

As for the Sharks, if you watched any of the previous matchup you have a general idea of who they are and what they bring. Burns leads the team in points with 41 while also posting a team worse -21 and Couture leads the team in goals with 20 followed by Hertl’s 14. The story of the Sharks is in net, after Martin Jones (14-11-4, 2.68 GAA, .910 sv%) went down with an injury Aaron Dell (12-4-3, 2.51 GAA, .917 sv%) has saved the day. With the Sharks needing every point they can get in a tight Pacific race I think it would be tough to go against Dell right now even once Jones returns.

Tonight features some of the best special teams going head to head that you can find, in fact both teams support both a penalty kill and a powerplay in the top ten of the league. Since I was using www.hockeyviz.com above for the defensive minutes I thought it would be fun to illustrate the special teams battle in this game..

The Sharks favor two spots on the ice during the powerplay as depicted  in the above left image with the darker fucsia areas (first time I’ve ever used fucsia in a post). In the previous meeting the Sharks capitalized on 1 of their three chances with the man advantage and the whole play started with Burns taking the initial shot from one of these spots:

The Penguins went 0 for 3 in the  last meeting against the Sharks but you should be able to clearly see that that may not happen again:

The center of the ice has been a problem for the Sharks and a spot of success for Hornqvist and the Pens. The trouble the Penguins had in the first meeting was getting the puck through to this area which isn’t surprising considering the Sharks PK numbers. I decided to rotate the Sharks PK shot map and make it a little translucent so that when it is placed on top of the Pens PP shot chart we can clearly see (by where the two individual dark areas would create an even darker one) where the Penguins can be very successful if they can get the puck there: 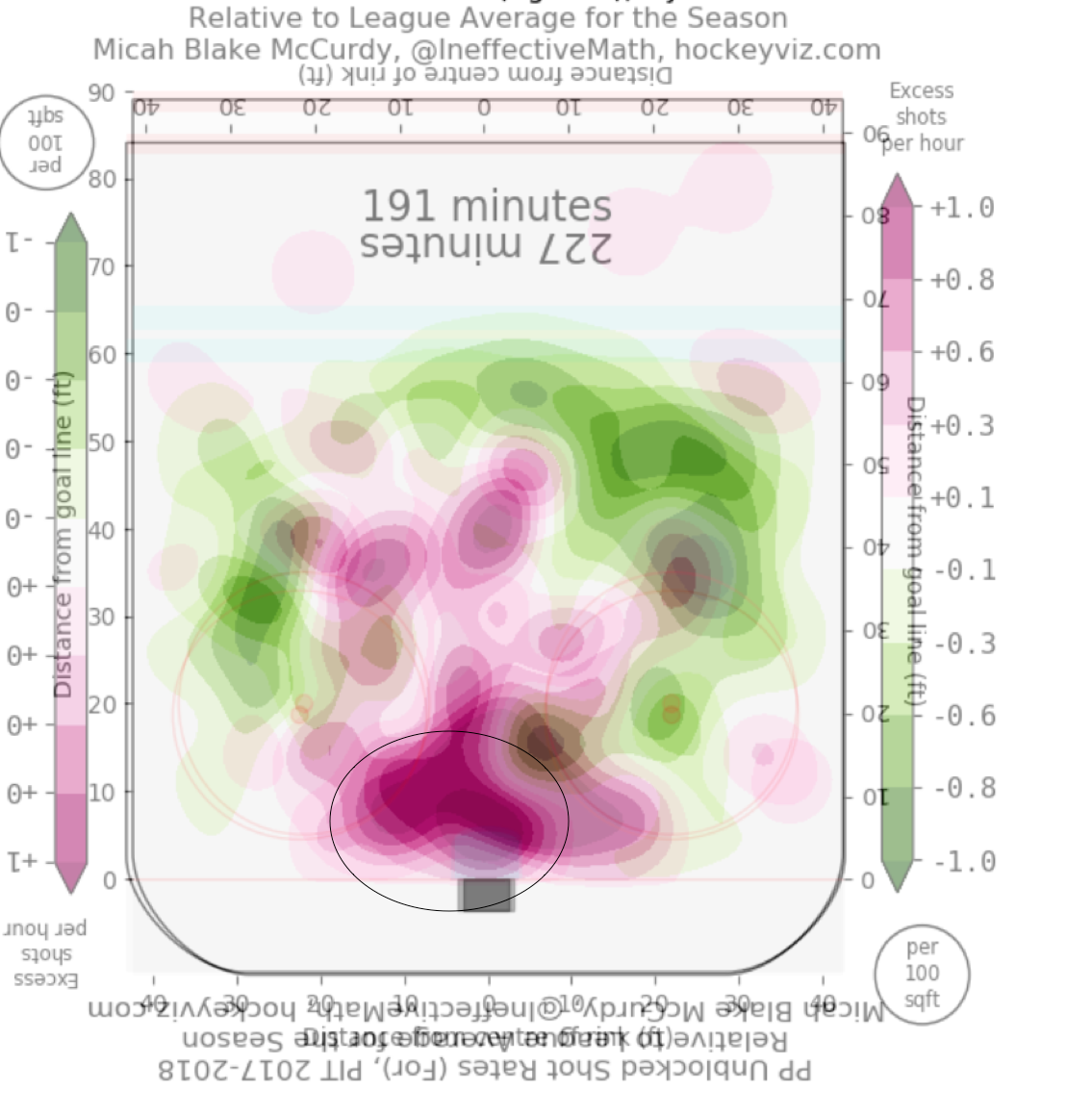 Keep in mind that only the darkest pink area in the circle is of interest here as the rest is a combination from both charts which I know can be a little confusing, but I thought it was pretty neat how there could potentially be a “perfect storm” for the Penguins to exploit. If the Penguins can find a way to use the half wall setup to their advantage they can cash in on this hole in the San Jose scheme.

I talked about how the schedule in March isn’t going to lighten up for the Penguins, so there isn’t a better time to take advantage of playing hard with a few days off after than tonight and most of February. The team has looked like the team we cheered for into June the last two calendar years recently, and when they play that way they are a tough team to beat. The team is looking to finish the month with a 9-3-0 record and as we said last game they are trying to average 7 wins in each of the 3 remaining 10 game stretches. They got the first one against the Wild and tonight is a another chance at some revenge. Bawitdaba, da bang, da dang diggy diggy slap your uncle and get down with the sickness, it’s time to roll, brother.

PS: I would like to send a huge thanks to our boy Finn Bonzalez (and SSG, Brendand and 66thDF I believe). I received an oddly packaged piece of mail yesterday with all sorts of odd markings on it from multiple languages. I figured if I was about to get infected with anthrax at least I wouldn’t have to pay back my student loans so I opened it and man, I am speechless. Thank you all so much for the birthday gift!