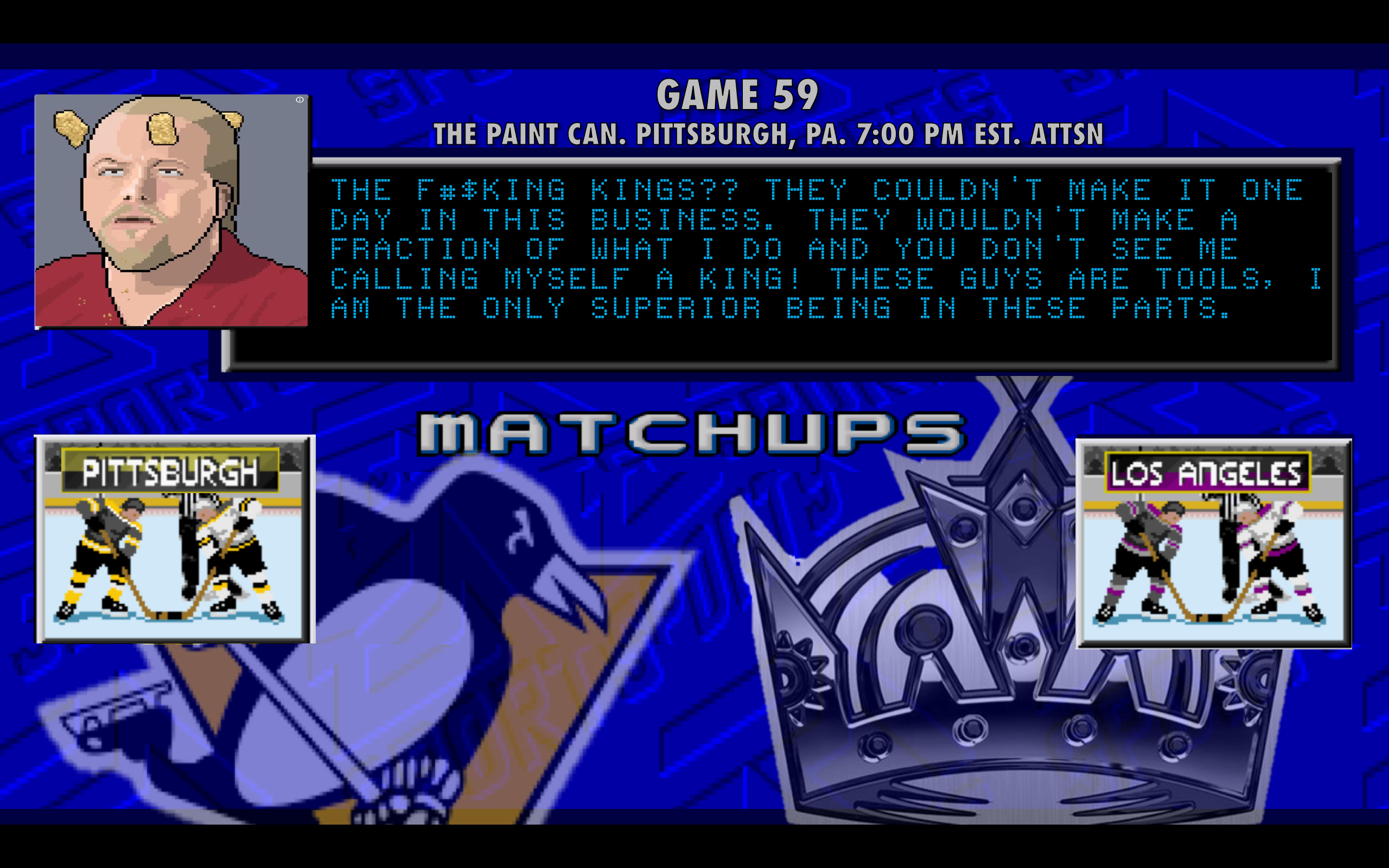 The Kings of the Cup welcome the Kings of Los Angeles to Pittsburgh tonight for their second and final meeting of the season. The Penguins are looking to continue their hot play in 2018 while the Kings are looking to hold on in the Western playoff race; currently the Kings are 3 points behind both Minnesota in the final Wild Card spot and the second place team in the Pacific San Jose. LA is 1 point out of third in their division as Calgary, San Jose and the Kings are all separated by 3 points from each other and 10 points behind Vegas. The biggest highlight for the Kings recently was the acquisition of the human pylon Dion Phaneuf because apparently Rob Blake doesn’t have the internet. In order to acquire Phaneuf the Kings dealt Marian Gaborik back to Ottawa. 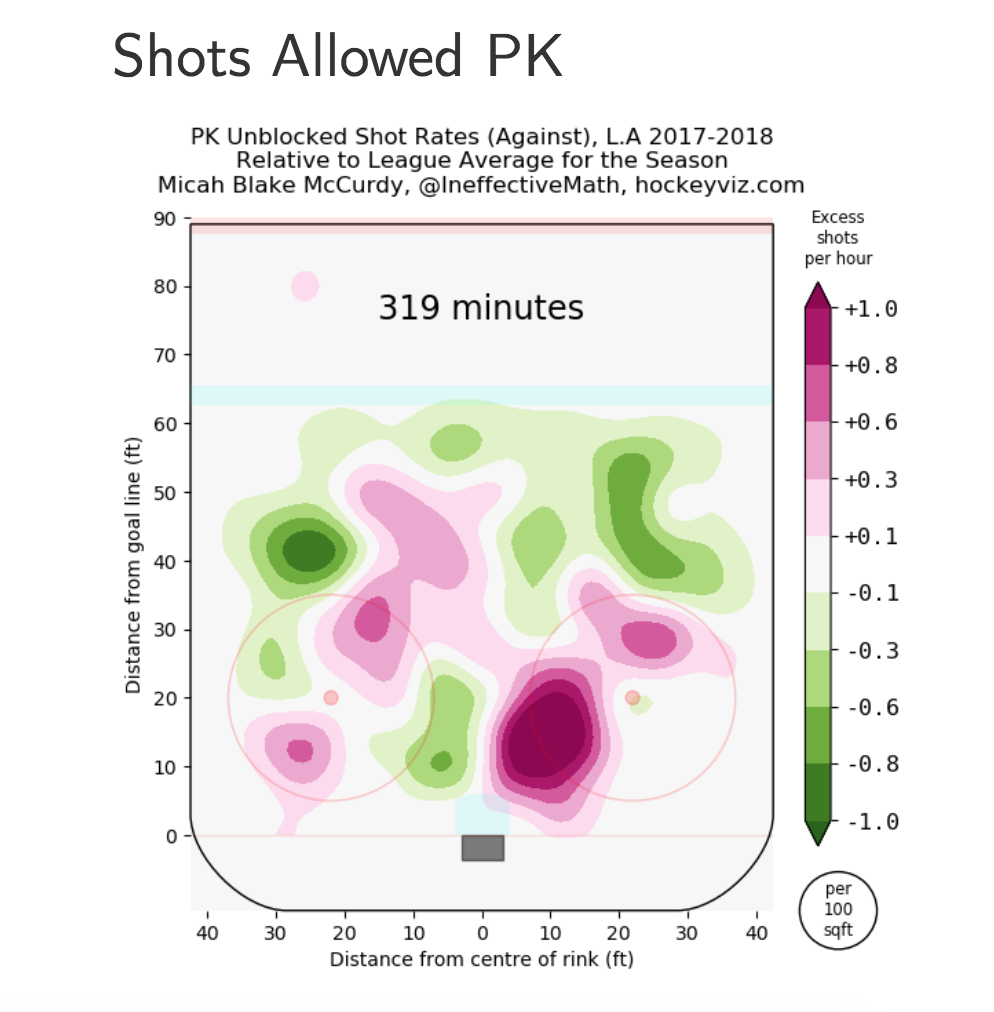 Hmm… they have a hotspot to the right of the net, if only the Pens had someone who loves to shoot from that side on the powerplay… 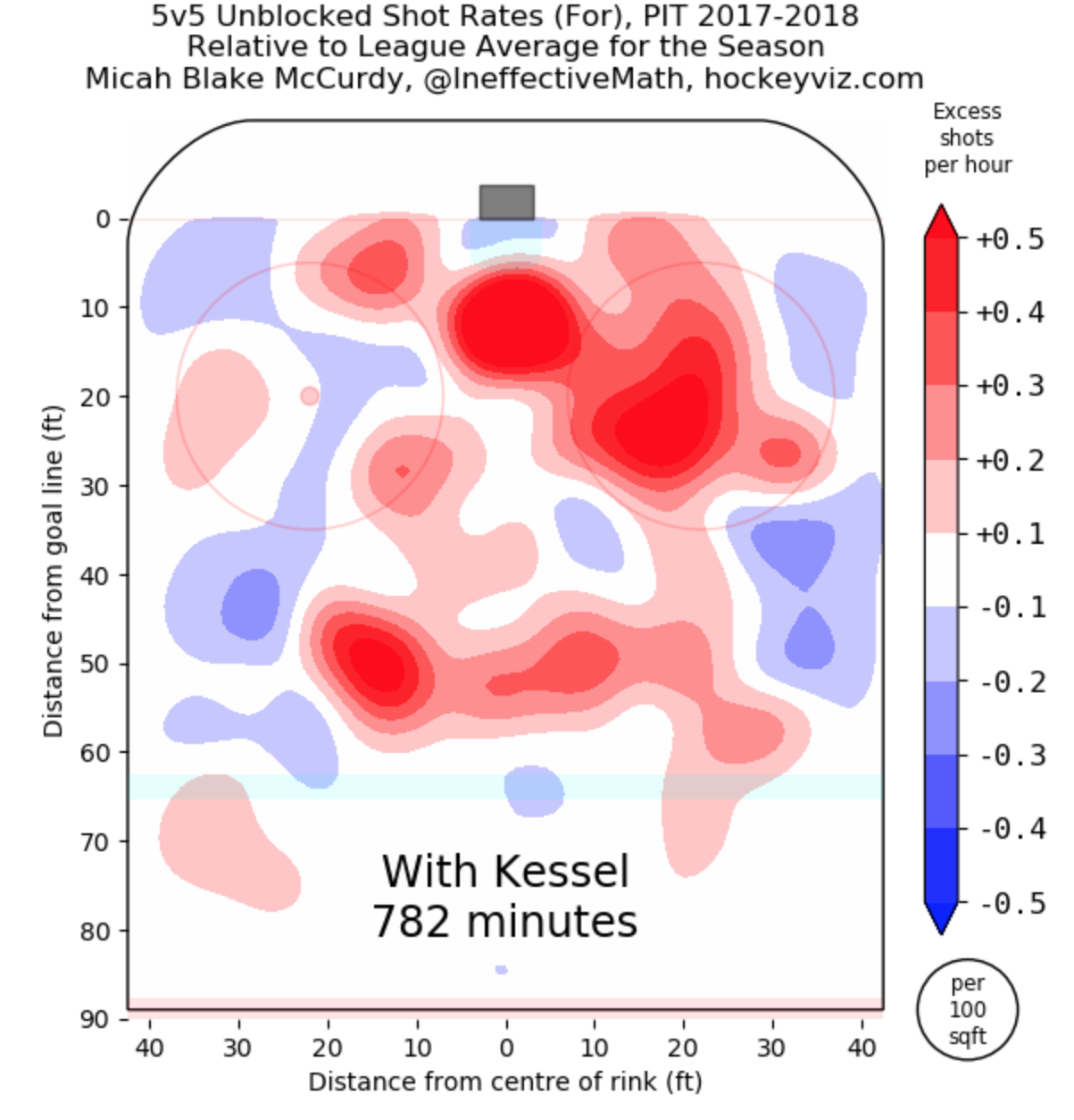 Above is Kessel’s heat map at 5v5, and below is the Penguins powerplay shot map with Kessel on the ice 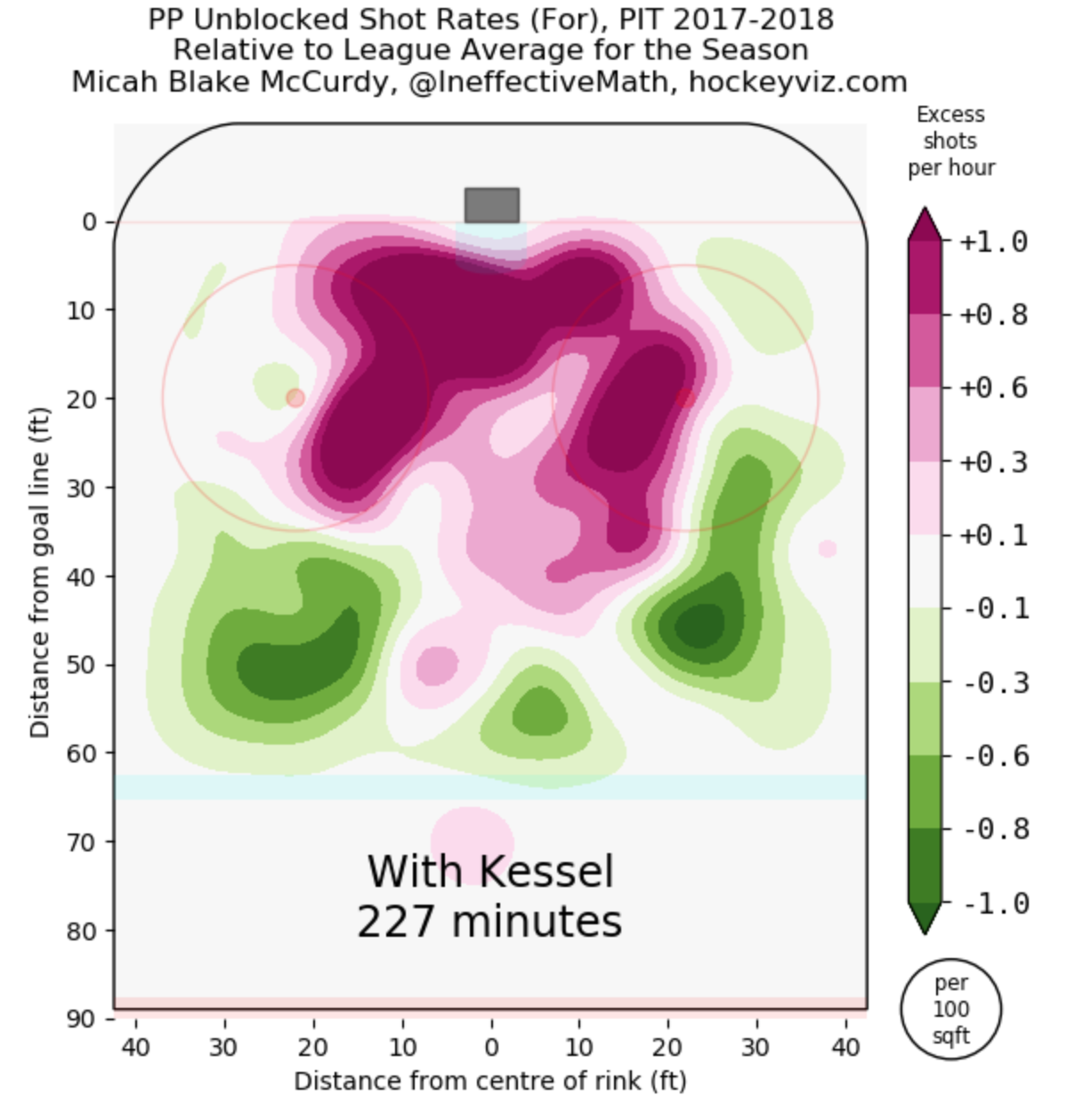 If the Penguins can work the puck to Kessel on the powerplay and he has enough time to shoot it could be a very good night for the Pens powerplay. Since the majority of the game won’t be spent with the Penguins powerplay despite what the rest of the hockey universe believes we should look at the 5v5 side of things to. For starters, the Kings don’t like to get the puck deep into the zone: 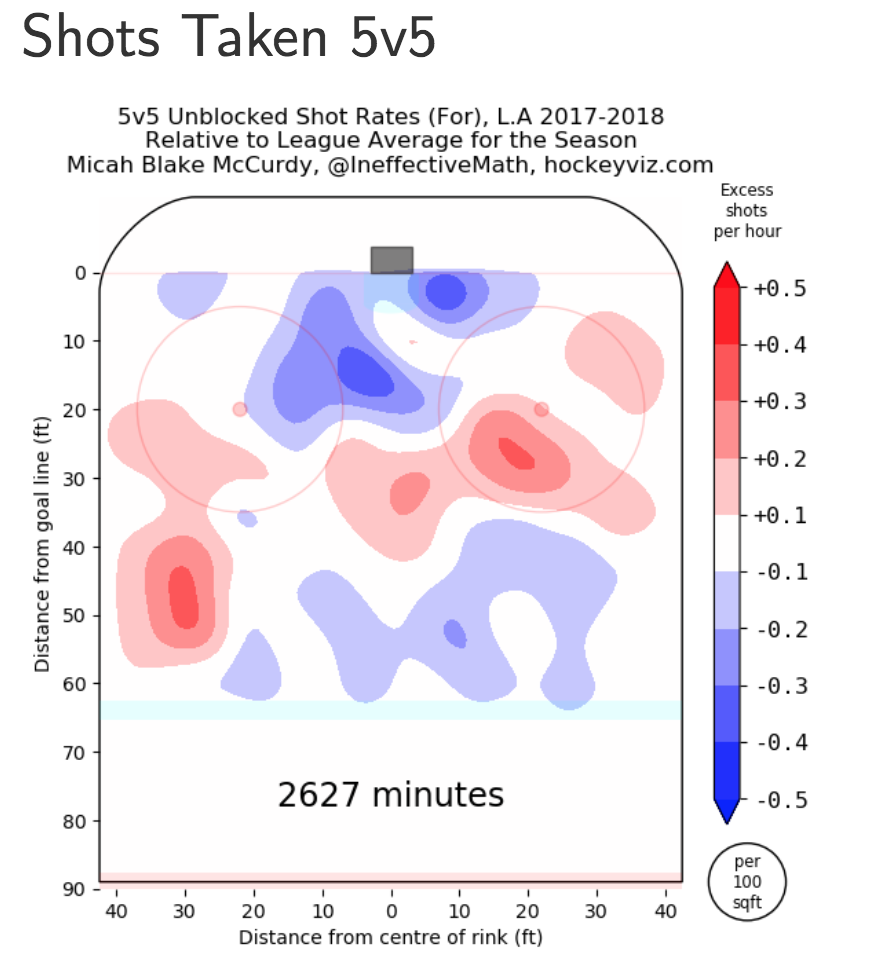 I’m not sure I’ve seen a team with a hot spot in the lower outer quadrant of the faceoff dot before but hey, LA is the land of new fads after all. Despite not liking to work the puck right into the crease the Kings are big on getting into the zone and firing the puck, especially off of transition. Los Angeles rarely attempts the one-timer on the door step tap-in goals that we see the Penguins score and instead make one good pass to the open forward and fire away. Their heat map reflects that trend clearly, and as long as the initial pass is predictable these plays usually don’t pose much of a threat to Murray. Speaking of Murray, tonight will be his 100th career NHL regular season game. Murray is 61-24-7 in his first 99, a win percentage of 61.6% and a point percentage of 68.6%.

It’s obviously not fair to compare Murray’s first 100 games to Fleury’s for multiple reasons but I’m sure some dumbass out there will do it. 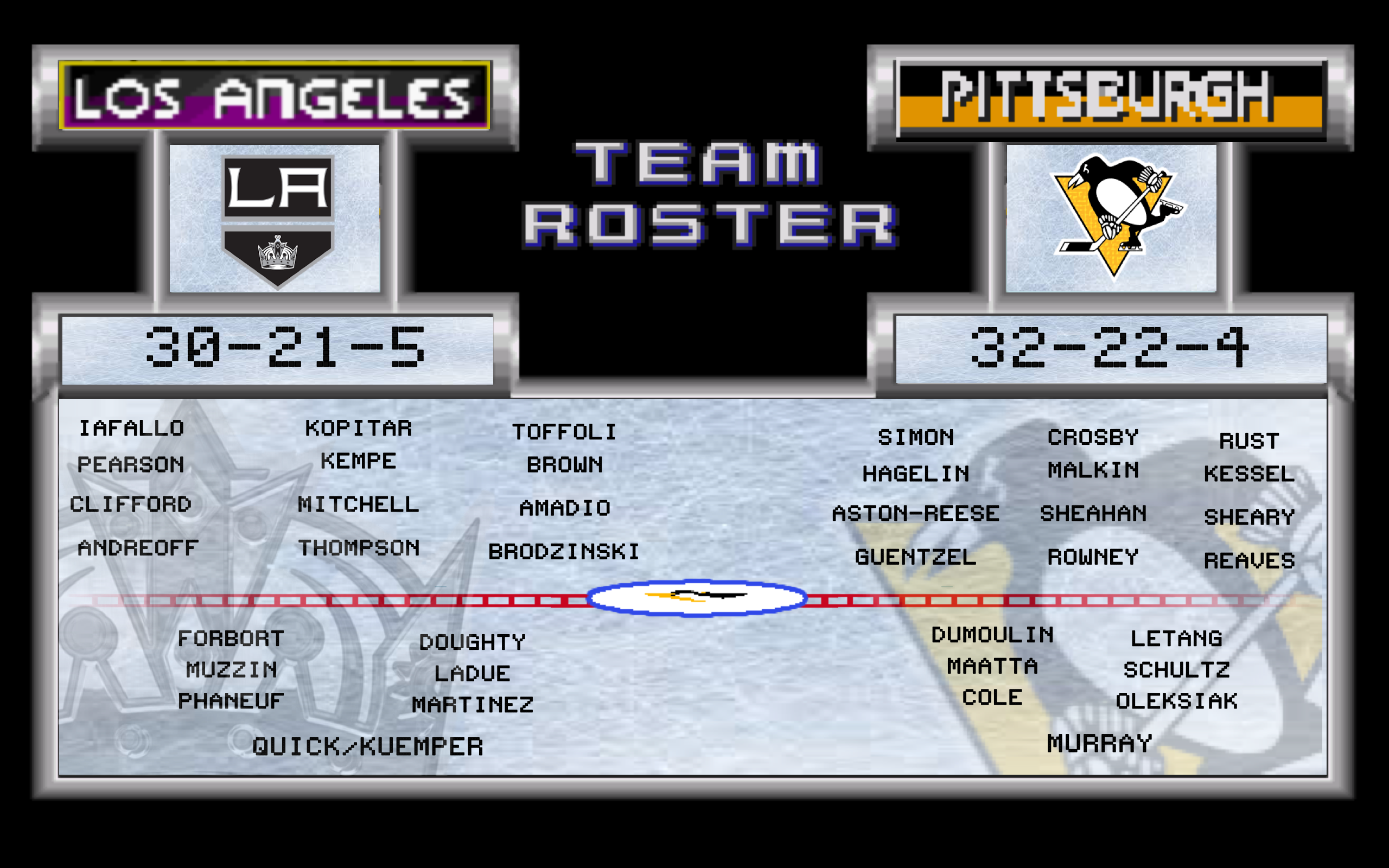 There is no reason to believe the Penguins will do anything different tonight with their lines. Zach Aston-Reese finally got himself on the scoresheet in the last game so it wouldn’t surprise me to see him bounce around the lines a little bit as Sullivan tries to see where he works out, especially considering ZAR is a power forward Sully will be looking to see how he responds to a bigger Kings team. Matt Murray will most likely get the nod in net, as soon as the Pens PR team announces that you should read the responses for a good time. Murray is 6-3-1 in his last 10 and has gone 5-0-1 since returning to the ice following the death of his father. In those 6 games he has a slightly high 2.42 GAA but also a stellar 0.916 save percentage. His recent play has moved his season totals to 20-12-2 with a 2.91 GAA and a 0.906 save percentage.

The other news is that a new #CrosbyWatch has begun as the captain is 9 assists away from career number 700.

As for the Kings, they are paced by first line Center Anze Kopitar’s 23 goals and 61 points. Second in goals is Tyler Toffoli with 19 while second in points is Drew Doughty with 40. Fortunately for Doughty it is his turn to win the Norris so he should be alright as long as he stays healthy. Jonathan Quick will most likely be in net for the Kings despite his recent struggles, Quick is 1-4 in his last 5 with a 3.20 GAA and a 0.872 save percentage. Quick is 21-20-2 on the season and the Pens will do their best to make sure he returns to LA at .500

Last season I had a LA fan attack me in the comments for believing that Evgeni Malkin was better than Anze Kopitar [much like Kopitar’s game I forgot your name so if you are reading this say hi!]. He said I had an east coast bias and that Malkin wouldn’t make it one game in Darryl Sutter’s system, which to be fair Darryl Sutter couldn’t make it in his system either so mute point. It is not because I live on the east coast that I can say comfortably that if given the chance the Vegas Golden Knights would’ve taken Malkin over Kopitar 100 out of 100 times. Evgeni Malkin is showing you why right now as he has elevated his game to that “Geno” level. It’s a level other players can’t reach because it only occurs when Geno is being Geno, and right now we need to just soak this up because it is awesome. 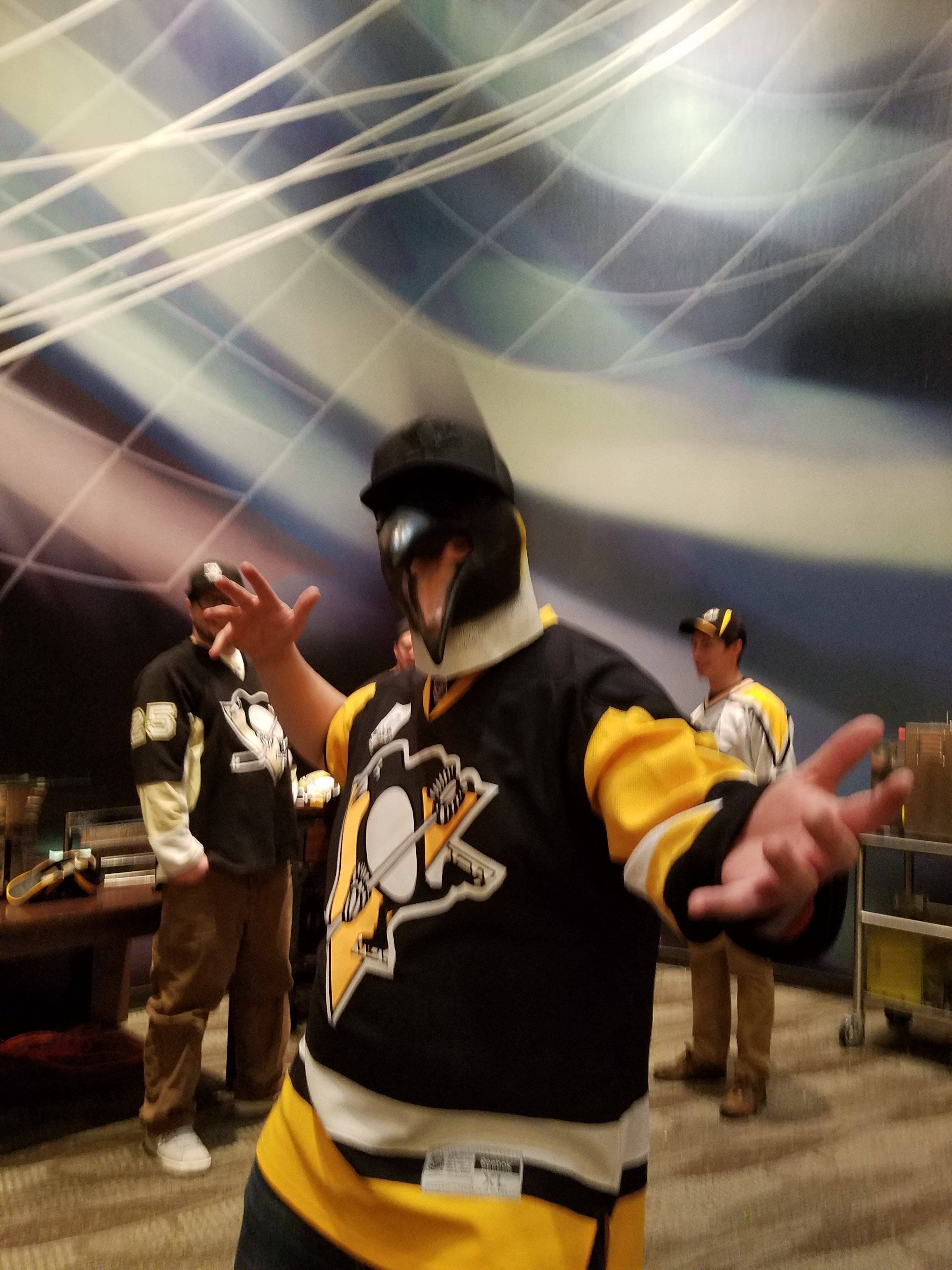 The Kings second defensive pairing is Muzzin and Ladue and despite sounding like a perfume brand this pairing could be anything but roses for the Kings in this matchup. The Kings are reportedly looking at putting Phaneuf with Alec Martinez on the third pairing allowing for this second pairing to face the speed of Hagelin-Malkin-Kessel. If Sullivan can get this matchup it should be another big game for this line, and another long game for the Kings.

The Penguins are playing some fun hockey but will be tested tonight against the physical Kings. During their last California trip we saw the Pens start to tire later in games against the Kings, Sharks and Ducks as the physical element wasn’t something they were used to in the regular season. I don’t suspect there will be as much fatigue in this one since there was no travel and the team is focused on playing playoff style hockey. Jonathan Quick is struggling and the Pens are coming off a game where they didn’t get as many shots as usual, this adds up to a potential can opening tonight and a quick exit for Jonathan. While the rest of the Metro is slowing down the Pens needs to keep on rolling, brother.