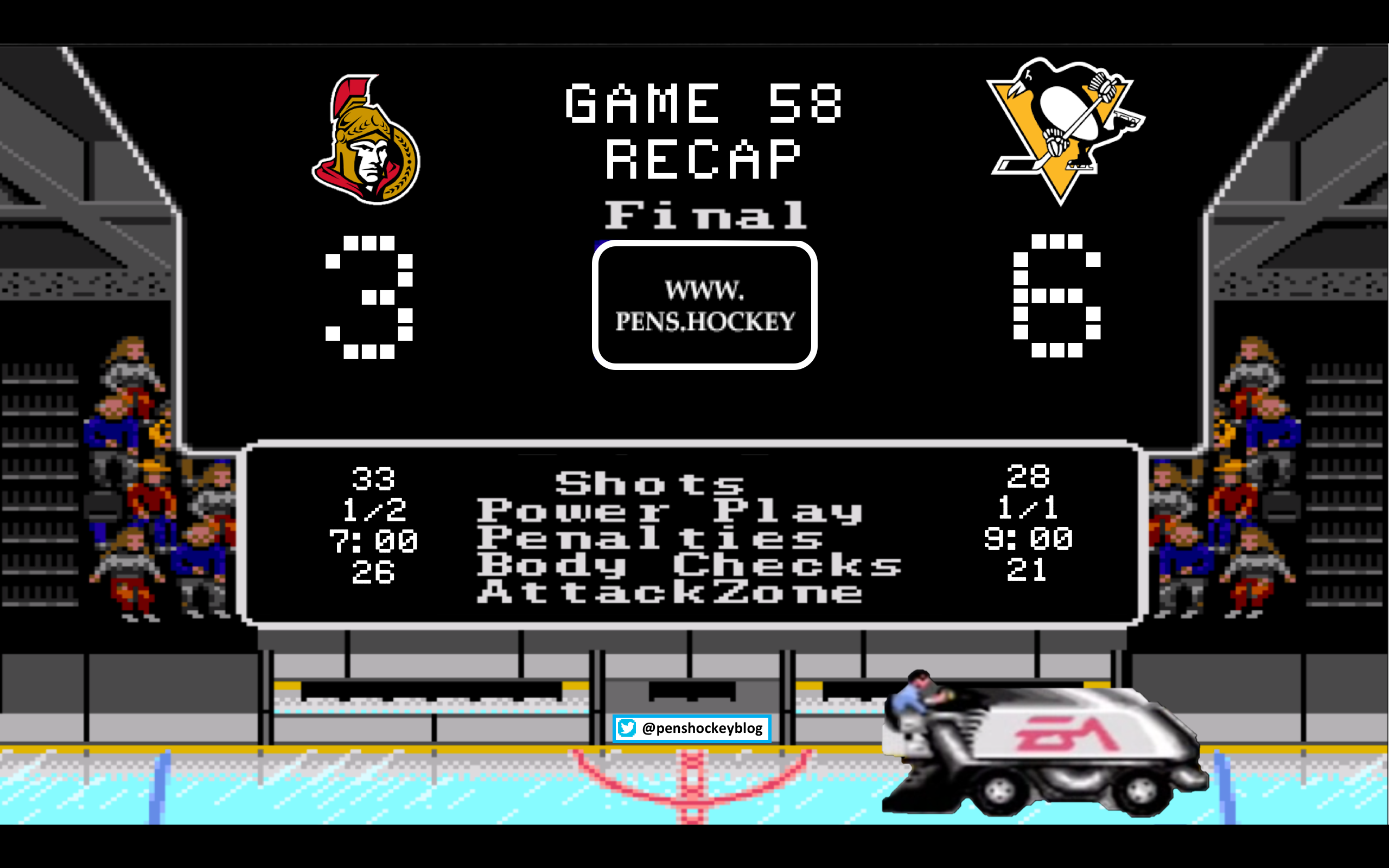 The Penguins entered this game playing some really good hockey, they looked at their calendar and saw Ottawa was coming to town and decided they could either take the night off or pistol whip these bitches for forcing 7 games last year. Unfortunately for the struggling Senators these aren’t Bylsma’s Penguins and they aren’t going easy on anyone and that has struck fear into everyone.

No change in the lineups for Sully and the crew, I thought they may give Murray the night off but also understand why they didn’t.

After ole JJ rocked both anthems we were ready to roll, and roll the Penguins did. Ottawa looked like the puppy that lost it’s way and the Penguins looked like the industrial revolution. Three minutes in the Sens couldn’t handle it anymore and took a penalty allowing for Sullivan to try someone else out in Hornqvists role and yeah, it worked out alright:

Just like they draw it up here, pass from low to high, D shoots looking for the tip and hits the jackpot. Some people are being critical of Jake Guentzel for being in a slump. Let me add some context to this latest gripe; some people are being critical of a soon to be 20 goal scoring 23 year old in his second season after not knowing who he was before December of last year because we are spoiled.

Surprisingly the Penguins couldn’t get their offense going following the goal as they had to readjust to the Ottawa style of play. Ottawa adjusted just fine but Murray was there to shut the door. When it was all said in done the Senators had 11 shots to the Penguins 4 but Condons are only effective 75% of the time.

Here’s a look at your #OTTvsPIT stats after 20 minutes of play. pic.twitter.com/erIiP77hkd

Their play in the first gave a little hope to the Senators as they came out in the second not looking like the second worst team in the East. 4 minutes in they tied the game when Derick Brassard ripped a filthy slapshot blocker side on Murray (sorry, yet another team that doesn’t incorporate gifs on twitter, though to be honest their PR team may be drunk at this point).

Senators fans started to get their hopes up for some sort of game 7 justice but as quickly as their season died when the puck got to Kunitz last year, so too did this tie game 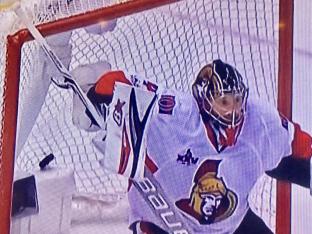 This is such a great goal from Guentzel because of the complete mismatch that should’ve taken place but didn’t. Phaneuf has perfect position on Guentzel, but Jake wanted the puck and Dion sucks. I mean seriously look at his “boxing out” “effort,” Phaneuf should have “E is for Effort” on his tombstone. Guentzel played Dion out of Ottawa as the pylon was traded to LA following the game.

OFFICIAL: The #Sens have traded D Dion Phaneuf and C Nate Thompson to @LAKings in exchange for forwards Marian Gaborik and Nick Shore.

Additionally, and as part of the trade with Los Angeles, the #Sens have retained 25% of Phaneuf’s remaining salary.

With the lead in their pocket the Penguins were ready to start playing and play they did. Shift after shift they started to remember how to dismantle the Ottawa trap and eventually the Hagelin-Malkin-Kessel line broke through the neutral zone with ease. After Hagelin started to cycle low he decided to reverse to Geno, and Evgeni does a casual spin around backhand slam bam thank ya ma’am:

Condon over commits and Hagelin knows that and more importantly knows where Geno is. This goal is just too freaking good. You can’t have a bad day because you can just watch this loop all damn day.

The Senators had exactly Phil Kessel seconds to pick their balls off the floor before Sidney Crosby makes a wobbly chip pass to ZAR and he handles the rest.

There’s nothing quite like scoring your first NHL goal…

And having Sidney Crosby assist on it? That’s pretty awesome too.

At the beginning of this gif (while it is frozen) you can see Sid staring at ZAR which is cool because it shows how he sees the game, after this little exchange he waits and then passes it to where ZAR will be before he ever gets there. Crosby Prime, 1 second shipping. Aston-Reese makes a good play to settle this puck down enough to get a shot off and since the puck was on edge it fluttered through. The team celebrating ZARs first goal is everything:

Love all that teammate support for Aston-Reese’s first NHL goal.

The Senators would get on the board late in the second to show some relevancy, the goal was credited to Colin White.

Even though they scored 3 goals you will probably be shocked to find out that the Pens only had 7 shots in the period. The Senators on the other hand threw another 14 at Murray.

The start of the third period looked like two teams that were going through the motions for two different reasons, the Penguins wanted to skate around and hold the lead, the Senators wanted to go down to CVS and buy some Tide Pods. After replacing Condon in net in the second with Anderson the Senators were able to keep the Pens off of the board. Eventually after 10 minutes the Pens decided enough was enough and they let Mr. Letang fire away:

Five goals… You know what that means?

A FREE MEATBALL tomorrow at @EmporioMeatball!

Pens PR with their priorities I mean corporate sponsors straight. There doesn’t appear to be a gif of the Letang goal, does that mean it happened?

The Penguins would take one of their two penalties a few minutes after the goal and Matt Duchene would score to bring it back to a 2 goal game with 6 minutes remaining. 6 minutes and down 2 was packed with about as much intensity as you could imagine the Senators would have. They pulled their goalie with 2:30 left, ZAR finished things off with 2:05 left.

Sorry, that gif was Rust shooting at the empty cage. The Senators wouldn’t score three to tie the game and the Penguins went into this trap game, put their big boy pants on and