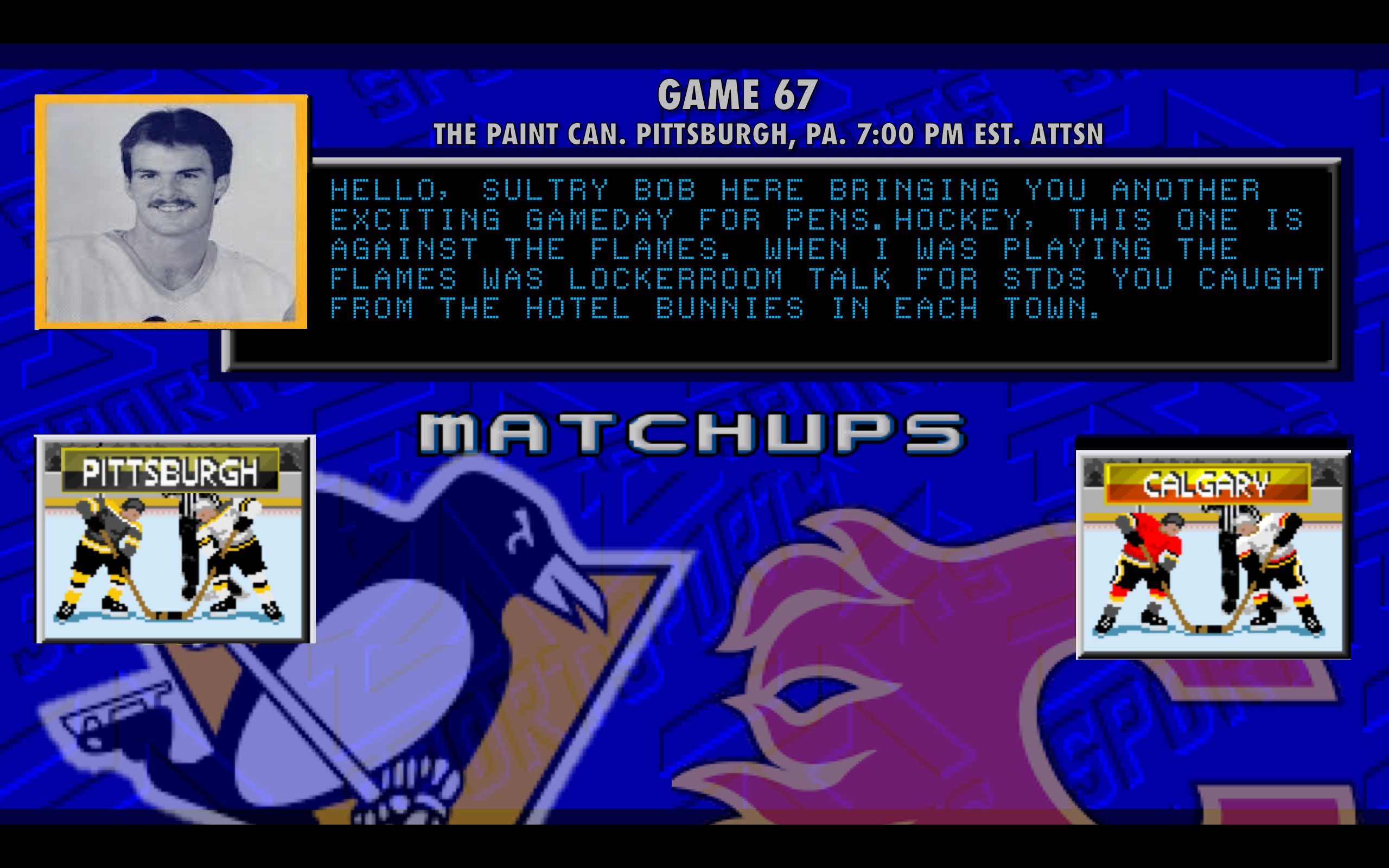 After enjoying a Sunday off the Penguins are back at it tonight with another home game, this time featuring the Calgary Flames. It is of out nature to not really follow the Pacific division too closely and that goes double for the Canadian teams (no offence, eh). The Flames are currently fighting to keep their playoff hopes alive as they sit 4 points out of the final Wild Card position in the West. Calgary hasn’t been helping their own cause as of late going 3-6-1 in their last ten including dropping the last 3 in a row, though losing starting goaltender on February 11th to a groin injury. One bright spot for the Flames in this game is the fact that they have oddly been better on the road (18-10-5) than at home (14-15-4).

This is just the fourth game for the Penguins since the trade deadline and more importantly yesterdays off day was just their third practice since the deadline. We saw Mike Sullivan tweak his lines last game after watching the team deliver two soulless performances against the Devils and Bruins which was an encouraging sign considering the lack of ample practice time Sullivan has had since acquiring Derick Brassard. After tonight the Pens have one day off before a heated division rival against Philadelphia on Wednesday night in Philadelphia. It is Sullivan’s job tonight to make sure that the Penguins are focused on the Flames and not looking forward to the Flyers because you better believe the Flames are looking forward to the Penguins.

The Flames are paced by American sensation Johnny Gaudreau and his 73 points (20 goals, 53 assists) in 66 games but then have a drastic falloff before Sean Monahan’s 58 points for second on the team. Monahan is leading the Flames in goals (29) and his one of 4 20 goal scorers on the Flames, Matthew Tkachuk (24) and Micheal Ferland (20) join Monahan and Gaudreau. Calgary is young and can strike quickly which poses a threat to a Penguins defense that is still trying to figure things out since the deadline while they attempt to defend the Murrayless goal.

The Penguins win against the Islanders coupled with a New Jersey loss to Vegas and a Philly loss to Florida yesterday gives the Pens a four point cushion in third place in the division and only one point behind the Flyers in second. Philadelphia is off until the Wednesday battle of Pennsylvania meaning wins tonight and Wednesday give the Penguins a three point lead with one game in hand. Obviously step one to that plan is winning tonight, but despite what you may have read recently the Penguins are still very much in control of their own destiny. 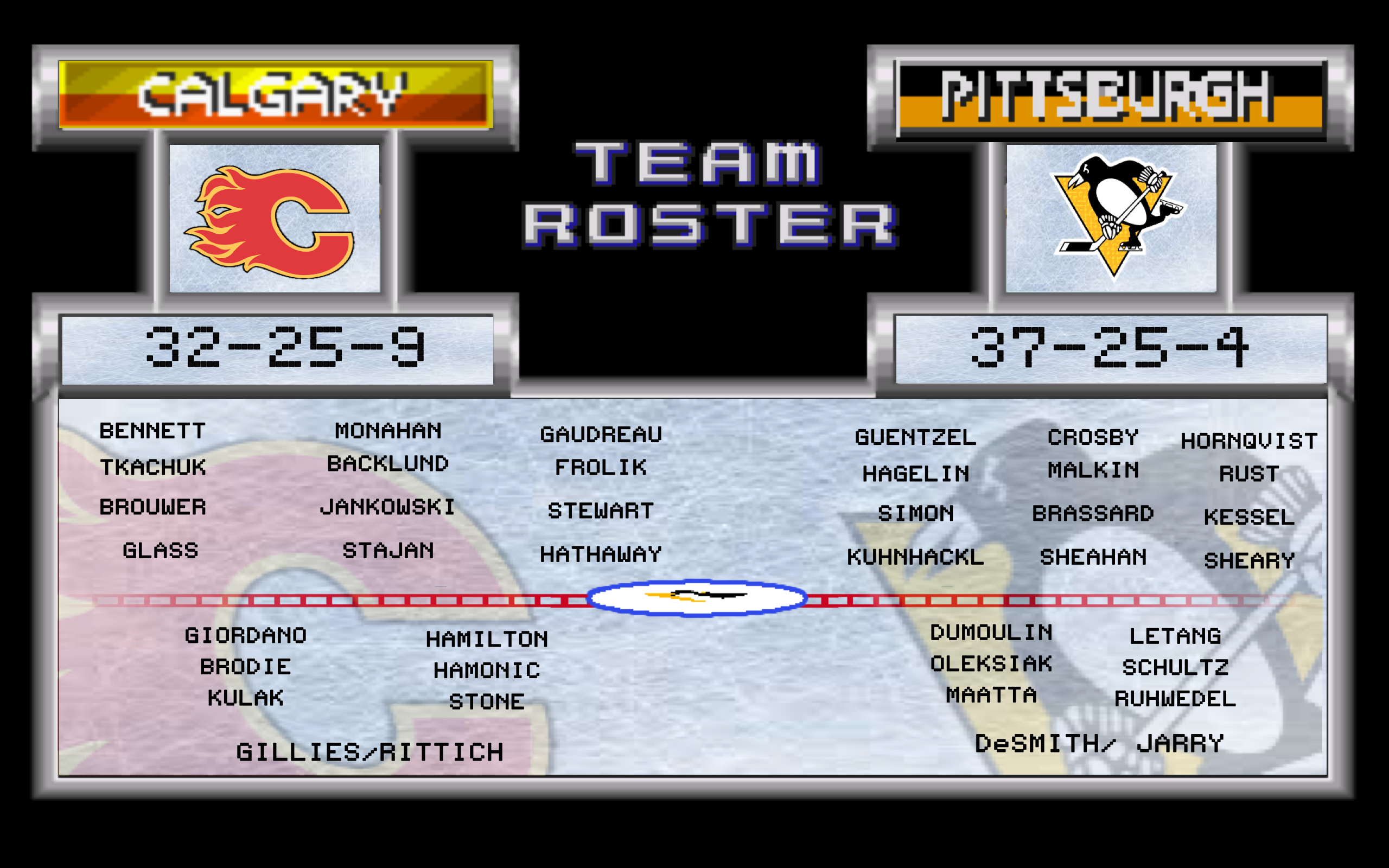 With a low news day coming from the Pens camp yesterday it is pretty doubtful that Matt Murray will return to action tonight against the Flames and based on his willingness to use Jarry against the Islanders I assume he will get the nod tonight as well. Though everyone is really excited about Chad Ruhwedel’s performance against the Islanders I feel like tonight will be a better game for measuring not just Ruhwedel but the defense as a whole. I felt like the mixing up of the bottom two pairings was a big turning point defensively for the Pens last game but again, it was in a game where they completely over powered the Islanders. If they do it again tonight we may be on to something here.

No your eyes aren’t deceiving you, that is ex-Penguin Tanner Glass on the Flames fourth line. This is a perfect game to hopefully see the advantage of a Brassard-Kessel duo on the third line as the Flames bottom 6 forwards are not even in the same ballpark as the Pens. With the last change at home Sullivan has a few good matchup options that are heavily in the Penguins favor. The Kulak-Stone paring is going to have their hands full with any of the Penguins lines, even the fourth line to be honest, and could be a sneaky option for Sullivan to get the Malkin line out against if he can manage it.

There are 16 games left in the regular season and though it isn’t realistic to expect the Pens to win all of them it isn’t too greedy expecting them to handle the teams below them, even if said teams are playing playoff style hockey. Tonight is another matchup of two second string goaltenders which means it will probably be a 2-1 game. Either that or the Penguins unleash some stored up anger and absolutely tear these guys apart, which is fine with me, brother.