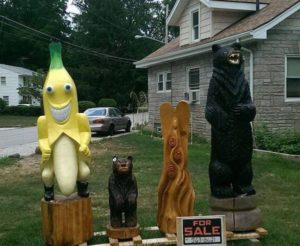 Forwards:
Kevin Porter looks to continue to make his claim to the starting lineup, he has had a solid camp so far and is probably a likely candidate to replace Rust in the lineup as of now (more on that below), but the staff has really liked what they have seen from Dominik Simon.

Tom Sestito is going to try to murder someone

Garret and Scott Wilson are both getting a lot of comments from the coaching staff. Garret Wilson played in 29 games for Florida last season, accumulating 0 points and 24 penalty minutes… So yeah he is basically Bobby Farnham.

You watch your ass!

J.S. Dea and Jake Guentzel will basically fight tonight to determine who will be at the top of the call-up list when the inevitable midseason injury occurs.

Fehr, Sheary and Kuhnhackl are the only players from the playoff roster playing tonight, so if you have the choice between this or going to the local firehall to play Bingo, I’d go to Bingo. 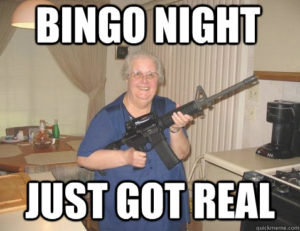 Tonight is an important night for the defense actually, with the battle for 6th and 7th man going in full swing, the Pens are dressing Pouliot, Schultz, Warsofsky, and hell we will throw Olesky into that mix as well. This is the “show us what you’ve got” moment for Pouliot after already playing (an slightly underwhelming Sullivan) in one preseason game. Schultz, who had an assist in his first game, could gain the edge in a starting spot tonight with a solid performance. It is worth noting however, that Warsofsky was a player the organization was comfortable in before he was taken out by the zebras last year.

Other defenders playing: Dumo (Contract year for him, would really like to see a deal locked up early like Matta was last season), Trevor Daley, and Reid McNeill (most likely his last preseason game unless they keep him around for a practice body).

Goalies: Fleury and Jarry. After the Steelers decided to die last weekend the Pittsburgh media is on edge, so the only possible outcome that can happen tonight is Fleury allows 2 soft ones early and then Jarry comes in with a 40 save effort as the Pens come back and win.

What’s on the mind?:

Bob Grove made an interesting comment on Twitter, stating that Rust (who broke his finger in game 6 of the SCF), isn’t being considered for any of these early games. It is early in the preseason, but generally after an injury the players want to get some game speed reps in, and as Grove mentioned, it seems like an awfully long rehab period for a finger. Today the coaching staff said they are hopeful, but not optimistic that Rust will play in the preseason, so there is that.

Lukas Bengtsson (who?) and Tim Erixon (part of Stanley Cup Champion Kessel trade) are sick and that is why they have not played in a game yet.

Team Canada, to the surprise of everyone, won the WCoH. Yay. What is astonishing however, is Canada is 24-0 since 2010 with Crosby in the lineup… yeah yeah yeah I know it is a team game and they have one hell of a hockey team, but damn.

The D pairings were just released, Pouliot-Daley, Dumo- Schultz, THE SKY BROS with McNeill being the odd man out

The top offensive players for Chicago tonight are Michal Rozsival and Viktor Svedberg, so seriously… do something else tonight 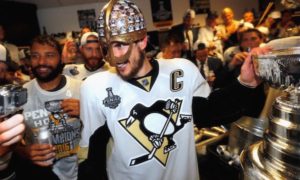