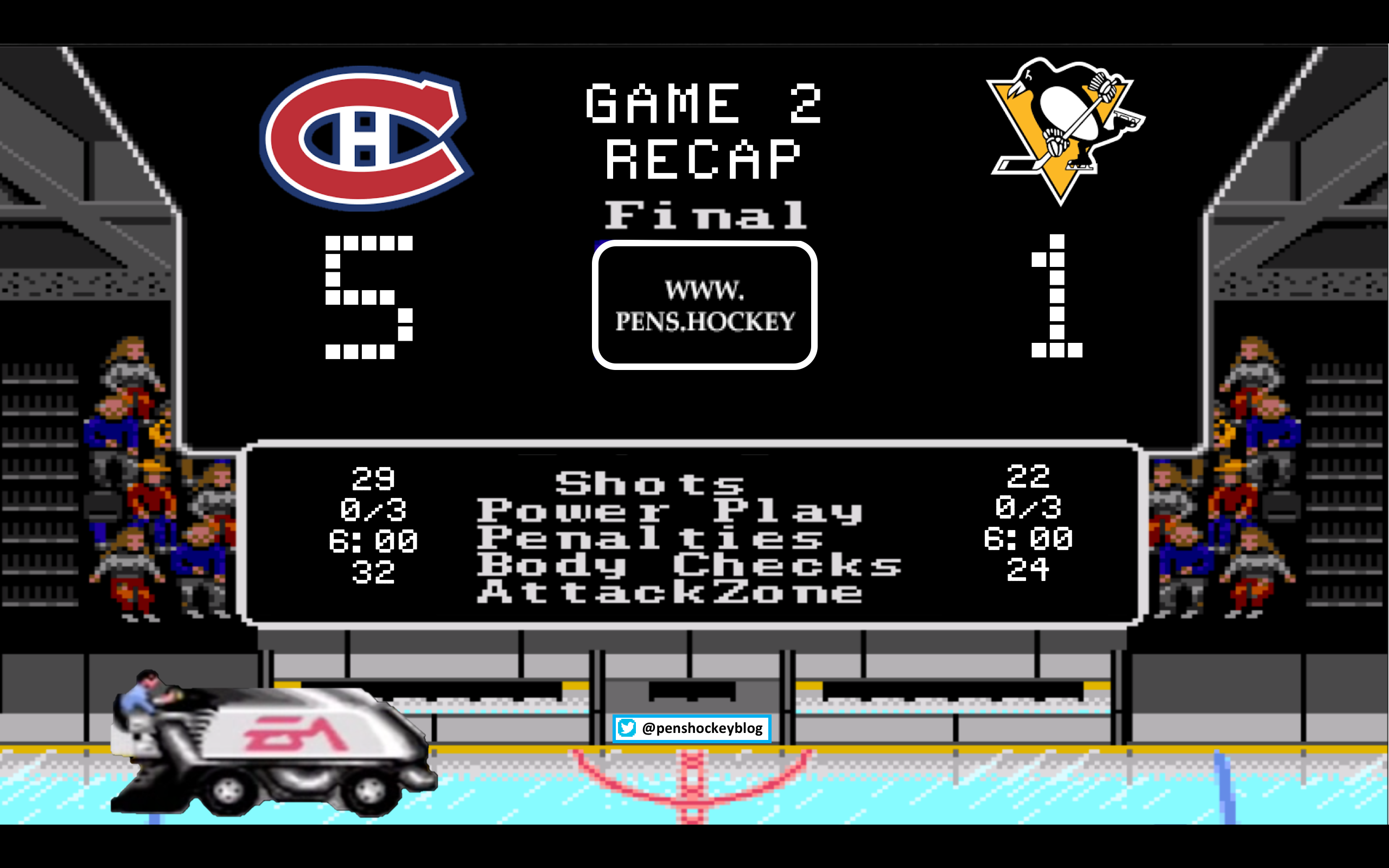 The Pens used the same lineup as last game. I’m not posting it here, just close your eyes and recall.

The game started off with a little jump from both teams before the Pens were quickly given a powerplay opportunity less than two minutes in. A prime chance to start dropping the hammer was gone after two unsuccessful minutes. The game evened out after that with neither team looking like they wanted to score first. Dominik Simon took a delay of game penalty but the revamped Penguins penalty kill was able to get the job done. After I woke up from my nap there was 7 minutes left in the period and Montreal had scored.

How does a team with possession of the puck in their own zone end up giving up a two on one? That is a question easily answered in this scenario, a tired Evgeni Malkin once again sending the puck to the middle of the ice at the end of a shift. When Geno has the puck here are his options knowing he is heading to the bench, the red shows the open lane to put the puck off the boards and deep, the blue shows the box he aims for:

Geno’s pass is tipped into the air which gives Johnson a tougher task that he failed at. Still, from the image above Johnson turning it over still looks like the Pens have even numbers back. 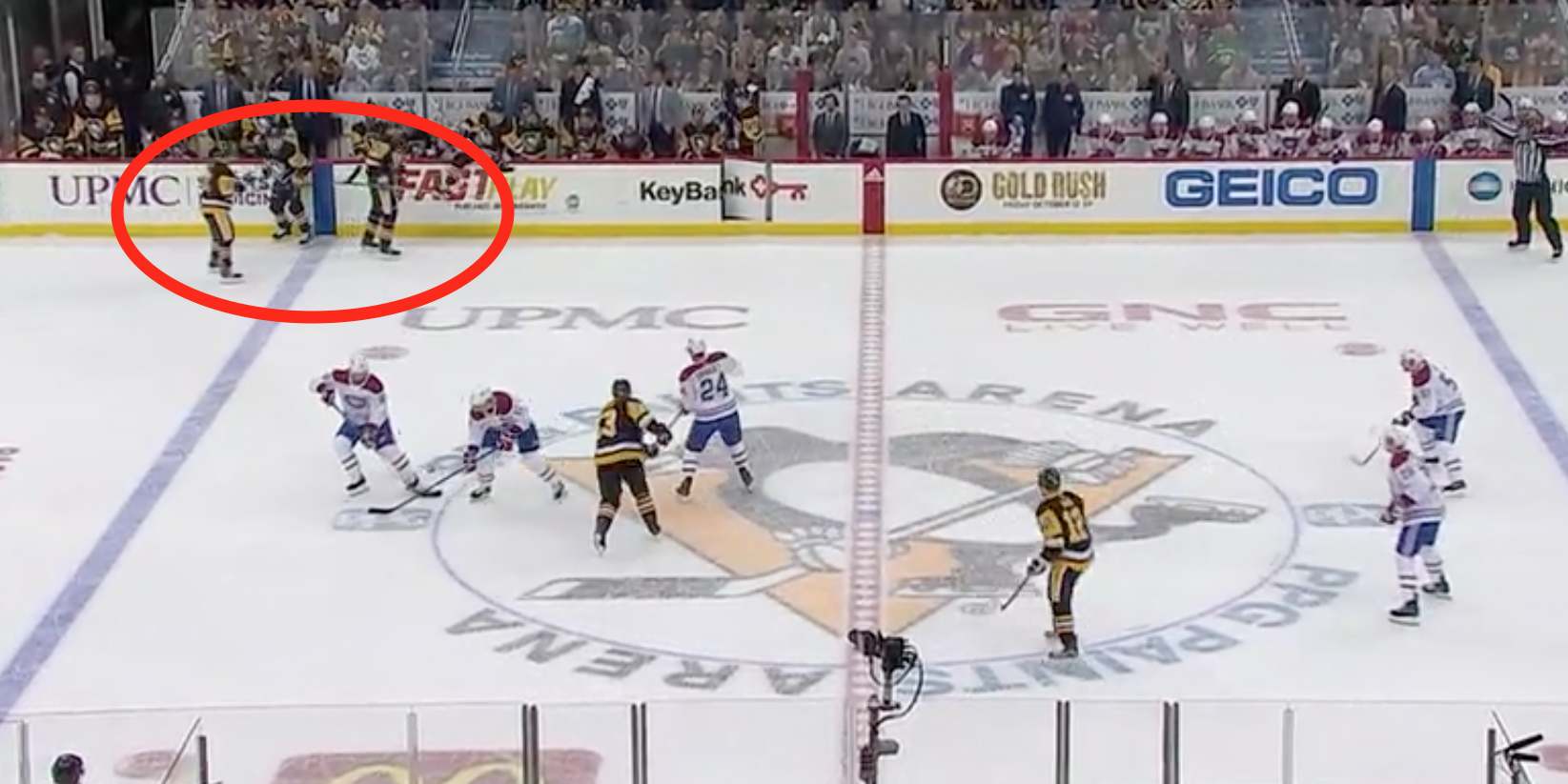 The entire line continued with the change despite a struggling teammate. The only player still in position is Olli Maatta who is not seen just off the left of the image. Matt Murray was in position to make the initial save but the puck somehow went off of Maatta’s stick, into his skates and put on a saucer for Gallagher. A mental mistake and a bad bounce, it’s 1-0 Habs.

The good news for the Pens was this was Montreal right? They could get that one back without a problem, after all it isn’t like Niemi was in net.

Jack Johnson goes for a long ice pass, it’s deflected up towards the Penguins line and turned over. The following frame looks like this with the puck carrier circled in red:

Now keep this relatively perfect defensive positioning in mind, this is the goal that was scored not even two seconds after the pass

Two defenders at the blueline and a mini breakaway happens. This cannot happen as Olli Maatta gets smoked like a Finnish Ham.

From the defensive positioning above to the frame below in 0.2 seconds… yikes 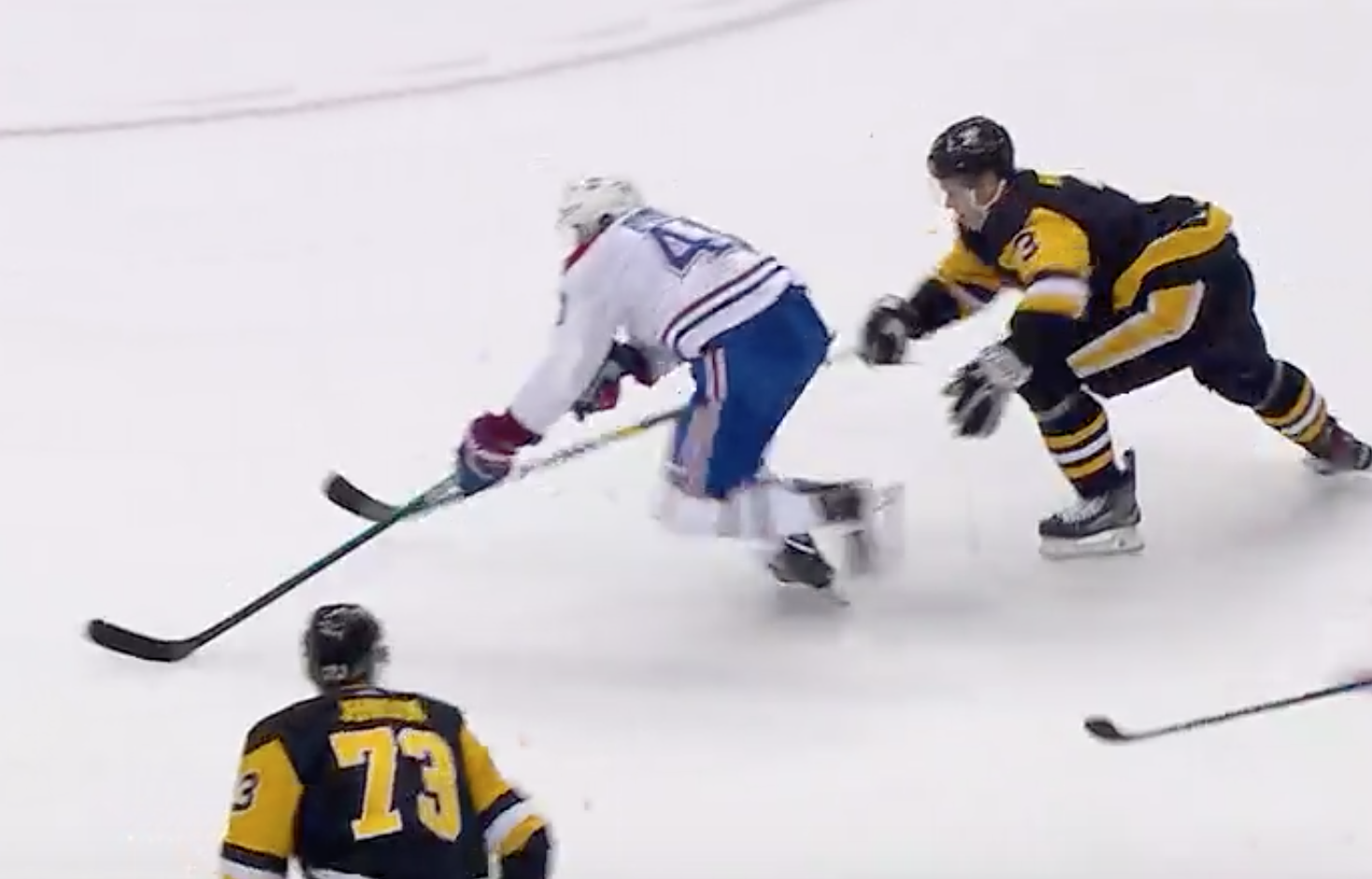 Matt Murray took the blame for this goal (and all of the others, naturally) but that’s a bit crazy… 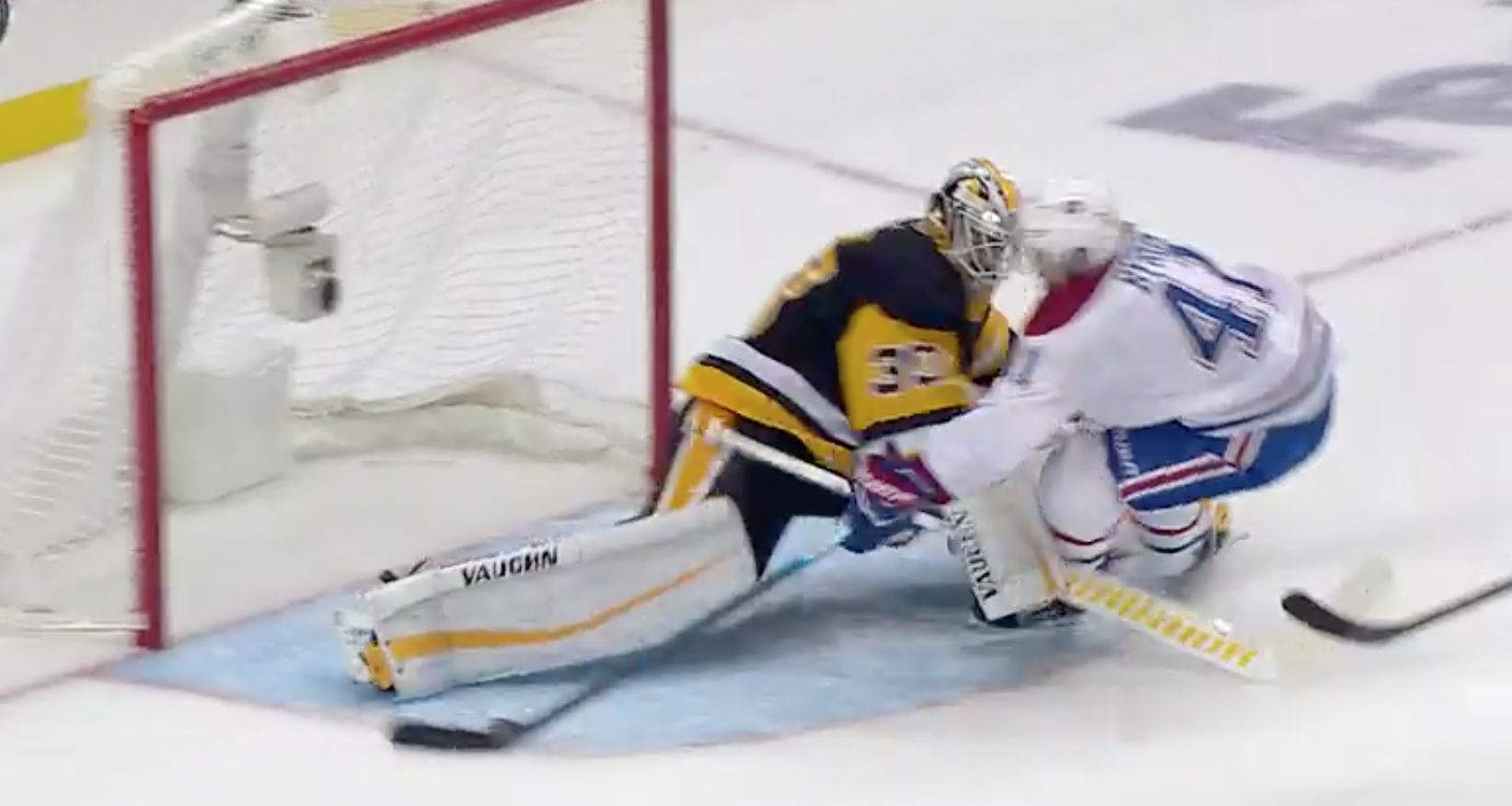 Not sure how much more of the net the guy can take up, if the people blaming Murray for this one attempted this save they would witness their balls roll out of their ripped sack.

Fortunately for the Penguins the Canadiens would take it easy on them and the period would end 2-0.

Here are your stats after the 1st period of play ⬇️ pic.twitter.com/GTzqE3aRcT

The Pens put up 5 shots in the first period against the Caps, 7 against the Habs, and have now been outscored 5-2 in the first frame. If the teams defense is going to continue to be suspect they can’t afford getting behind early.

It’s okay though, Mike Sullivan always knows what to say and the boys will come out of intermission ready to go. Three minutes in a puck is sent in behind Murray, Dumoulin goes back to get it and flat out gets out hustled by a hungrier Canadiens team. Chaos ensues and the Habs take a 3-0 lead

More timely play leads to a #Habs goal, Max Domi feeds Paul Byron for a his second goal of the game. pic.twitter.com/0zomFi1Ds4

Here is a full gif of the play:

After the first shot you can see Brian Dumoulin look up and point to Phil Kessel as if to say “What the fuck bro why is this guy open?” 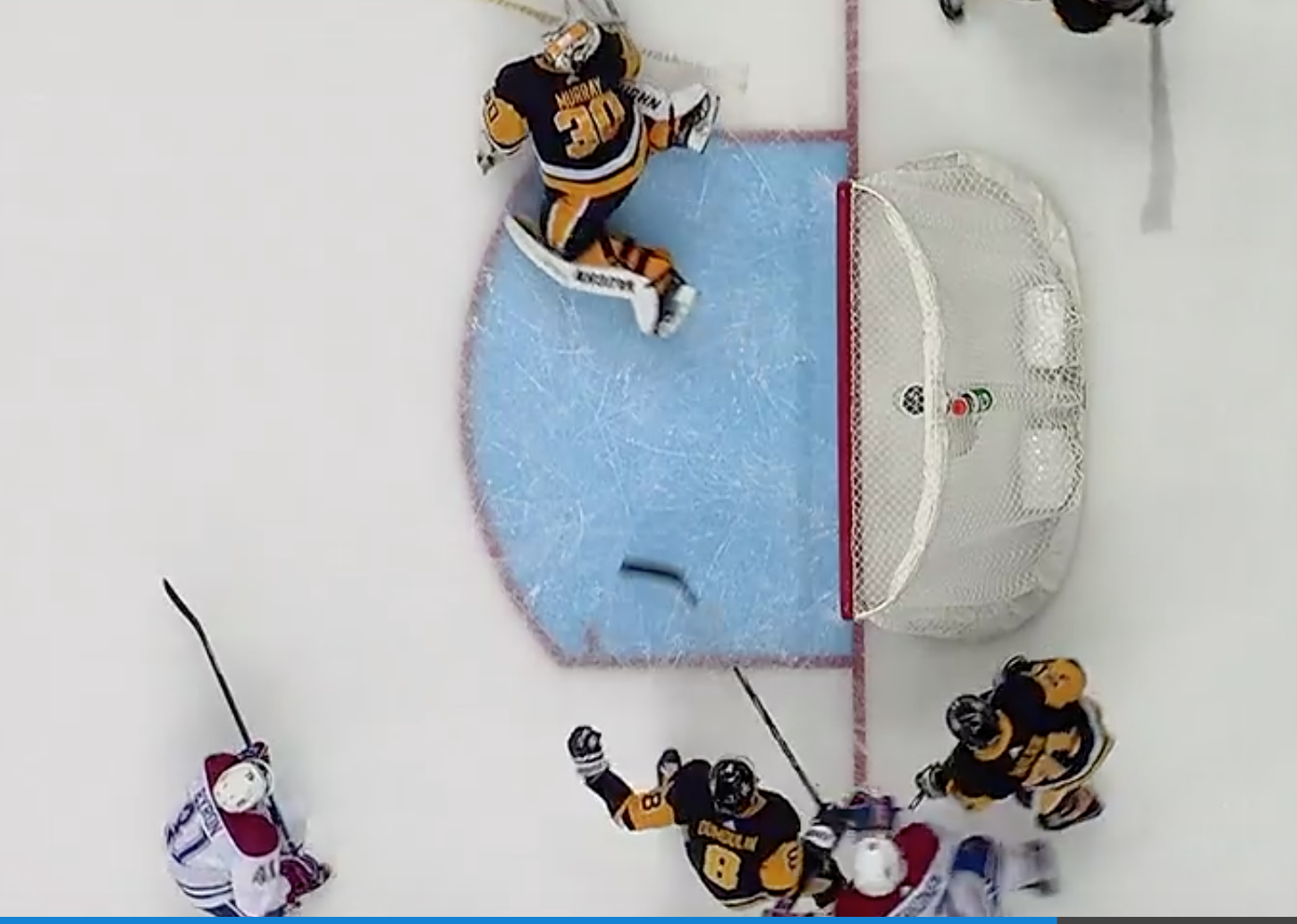 The entire Penguins team seems to be having problems adjusting to the new boards at The Paint Can, but the other team plays on the same boards so this isn’t an excuse. Murray makes the first save in a shitty situation, the chances of saving a one touch tip shot where the offensive player just makes contact on the puck is a prayer. This pains me to say because after the game I was completely ready to drag Matt Murray for his performance, the most disappointing thing I’ve found after reviewing the footage for the millionth time is the Penguins problems are not as simple as bad goaltending.

Down 3-0 there is still that glimmer of hope with this hockey team. The next 10 minutes the Penguins looked to finally get going but nothing was falling. A few posts were rang. A few pucks barely missed going in. They just needed a bounce. Montreal would take a penalty at the 7 minute mark, the Penguins puck luck would continue when Crosby took an open net chance and somehow hit a guys butthole. The Habs would take another penalty at the 13 minute mark. The Penguins dumb play would continue when a defender would pinch and Phil Kessel would be the lone defender on a two on one

Joel Armia gets his first as a Montreal Canadiens shorthanded goal vs Pittsburgh Penguins pic.twitter.com/r5hxybu75z

A two on one while your team has a man advantage is an issue. Take a wild guess on how the play starts…

Ohhh look, a Penguins defender (Letang, circled) is pinching and the forward (Malkin) didn’t drop back to cover the vacated point. Four goals scored, two themes. Pinching D that goes without being covered or defensive pairings getting out-hustled.

Murray was a tad slow getting across his crease on this one so I will give him some fault, however this puck was actually about an inch off the ice when it was whacked with a swinging stick from Armia who was just trying for contact and not aiming.

Much like the 3rd goal there was no telling where this puck would go, with that being said a more aggressive push would’ve covered where the puck went in however it could’ve exposed further holes had the save been made.

Daniel Sprong continues his nonimpressive play while being a point-per-game player. With the point Kris Letang passes Paul Coffey for the all-time points by a Penguins defender record. The Pens honored Letang with the following video

Kris Letang is now the franchise leader in points scored by a defenseman (98G-343A-441PTS). Hall-of-Fame defender Paul Coffey held this record for 27 years.

Up in shots and faceoffs, but still looking for points where it counts. pic.twitter.com/hnyR9m4TF6

The Penguins went into the locker room after the 2nd with 19 shots on goal. They would finish the game with 22. 3 fucking shots when trailing by 3. THREE FUCKING SHOTS. 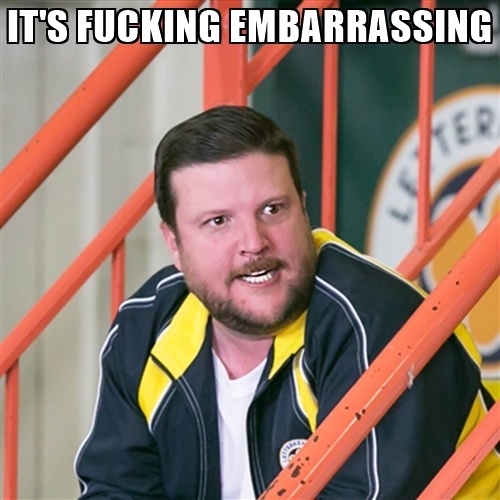 Charles Hudon scored at the midpoint of the period to give the Habs a 5-1 lead, I’m not sure if anyone was left in the arena to see it.

Mike Sullivan summed it up perfectly

Coach Sullivan: "We're a team right now that just wants to score, instead of just playing the game the right way and playing on both sides of the puck. We have to make good line changes. We aren't even close to where we need to be. That's what I learned from this game today."

Coach Sullivan: "We weren’t good enough, to a man. Our coaching staff is part of that. We have to be better… We are trying to focus on the process – how you win and how you lose. That's where our focus is going to be right now."