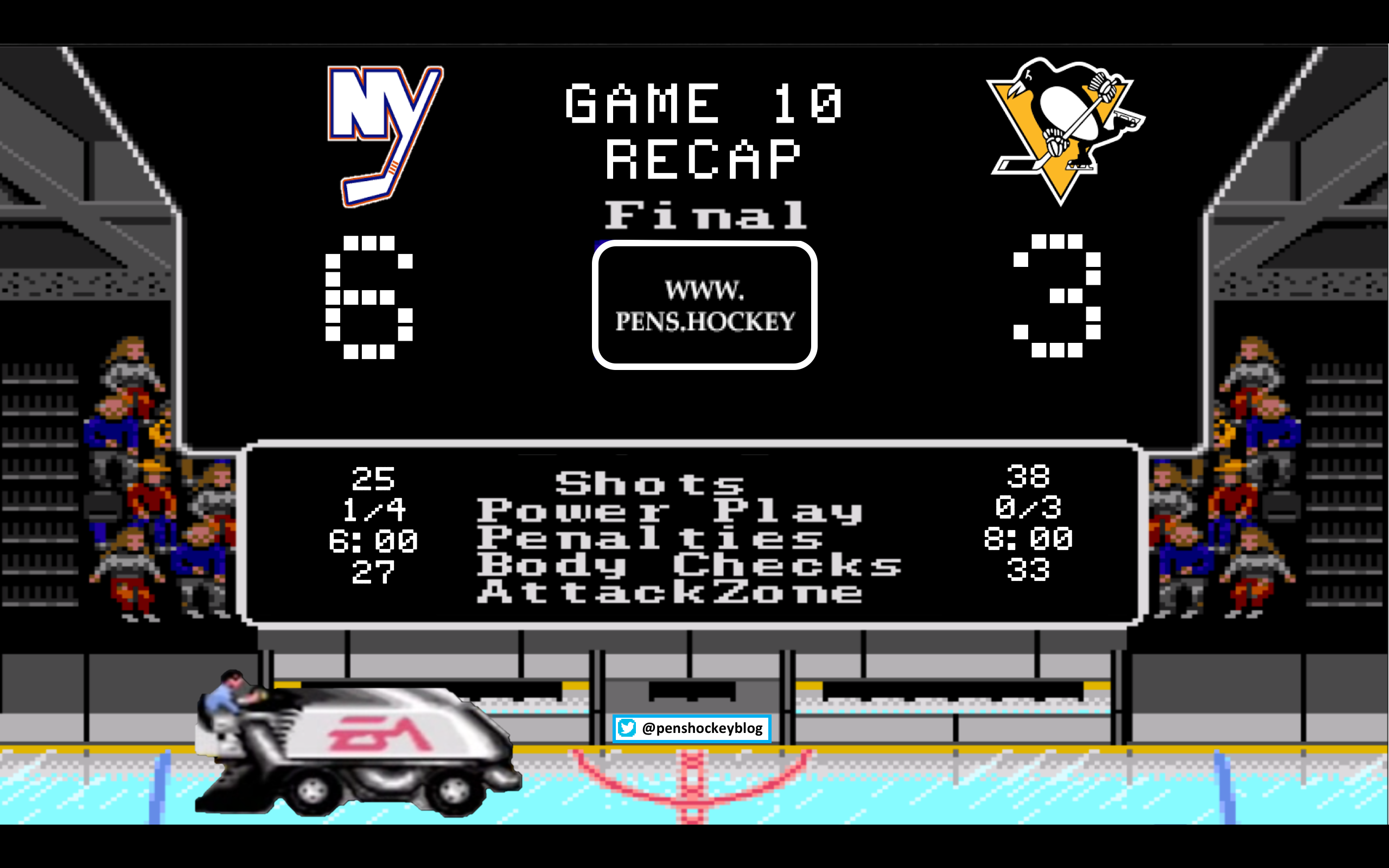 The Penguins were back on home ice for the first time in 4 games following a road trip, it was also the first game in Pittsburgh since the tragedy that occurred at a local synagogue. The team, as usual, went above and beyond with their pregame video:

If you didn’t choke up while watching this you’re lying. The Pens also wore new shoulder patches

The Islanders also paid their respects, classy moves all around by both organizations

Our hearts are with Pittsburgh. Please join in the effort to support victims and families of Saturday's tragic shooting at the Tree of Life Synagogue: https://t.co/mgwgiO1WK4 pic.twitter.com/DVbq1hjb1F

And shared 11 seconds of silence for the 11 lives lost, 11 seconds that seemed to last an eternity .

Lined up and ready to take on the Islanders.

Kris Letang (lower-body injury) is out for tonight's game. pic.twitter.com/laJ6ZwmDxF

Kris Letang is currently listed as day-to-day and did not play in this game. Derick Brassard continues searching for his dick and also did not play. It doesn’t matter which NHL team you’re playing, when the guy on your top pairing has played 3 career NHL games it’s probably not going to be a good night.

Full disclosure, I worked last night during the game and though I got off at 11 pm some douchebag decided to get sick on the subway turning the express train into a local, this caused me to miss my original train home so I picked up a  later one which moved at approximately the speed of smell, I eventually got home at 1:30 AM. I have a conference today at 9 am and a 4 hour exam at 11 am so this recap is going to suck as much as Jack Johnson, feel free to use screen shots on your Nokia flip phone to justify my poor performance though.

The Pens came out with a lot of hop in their step to start the game eager to put up a show for the Pittsburgh faithful, unfortunately lady luck didn’t care. After a penalty kill by the Isles they were the ones to crack the ice first when Andrew Ladd, who apparently still plays in the NHL, scored at 10:43:

The 1-0 lead lasted for two minutes before Brock Nelson netted his 6th of the year on this play:

That’s just Jack Johnson taking away the dangerous pass up the boards while a man walks down broadway, huge coincidence he was on the ice for this goal though.

The score was 2-0 but the Penguins were actually carrying the play, finally they were rewarded when Dominik Simon tickled lady luck for all of the missed opportunities he had early in the season.

One of those nights.

Sid picking his corner like the first hooker to arrive in the evening, seeing him with a shoot first mentality is never a bad thing.

Neither goalie allowed another goal in the period, good for them

Here's a look at the numbers from the 1st period of play ⬇️ pic.twitter.com/yKHXNiyCdz

The second period started without the Penguins on the ice as they fell off into oblivion. The Islanders took advantage and the lead less than halfway through when Matt Martin, who is also still in the NHL, scored his third of the year:

This gif with the clarity of the Pens defense. Maatta misplays the man along the boards, Oleksiak tries to be a hero and help out, wide open man scores for the third time tonight. Hockey isn’t hard when you are feeding wide open people all night. Just a minute after the goal Riikola was getting two for hooking and the Letangless PK went to work for like 40 seconds before it was 4-2

Eberle walks right in front of Murray and buries it. You would love for Murray to make this save, Murray would love to not be 1 on 1 with an Islander goal scorer. After giving up 4 goals to 4 wide open players on 9 shots Sullivan decided to take Murray out of the net in hopes that his team would feel like giant sacks of poo and start to play better. The did for like 40 seconds until it was a case of deja vu when Eberle scored again as the defense broke down again.

Nothing else in the frame, here is the “thank you Kuhnhackl” video you’ve been waiting for

The poor intern that had to find 35 seconds worth of footage for this deserves a job.

Here's a look at your stats through the 2nd period of play. pic.twitter.com/J7IvjI6M3M

A no-look tally for @emalkin71geno. Impressive.

Malkin's goal extends his point streak to eight games (5G-11A), and also puts him in sole possession of second place in the NHL in scoring (19 points). pic.twitter.com/70GvaLOm3F

The skill of this goal is really highlighted in the gif because it is in slow motion. While this gif plays you can barely keep up with every movement going on with Geno’s body, now imagine being the brain controlling that at game speed. Unreal. The goal injured Lehner or something and Greiss came in for relief.

The Penguins were destined to lose this game, and it wouldn’t be a real Pittsburgh game if Tom Kuhnhackl didn’t score against them in his first game back.

Nothing else in the final 11 minutes.