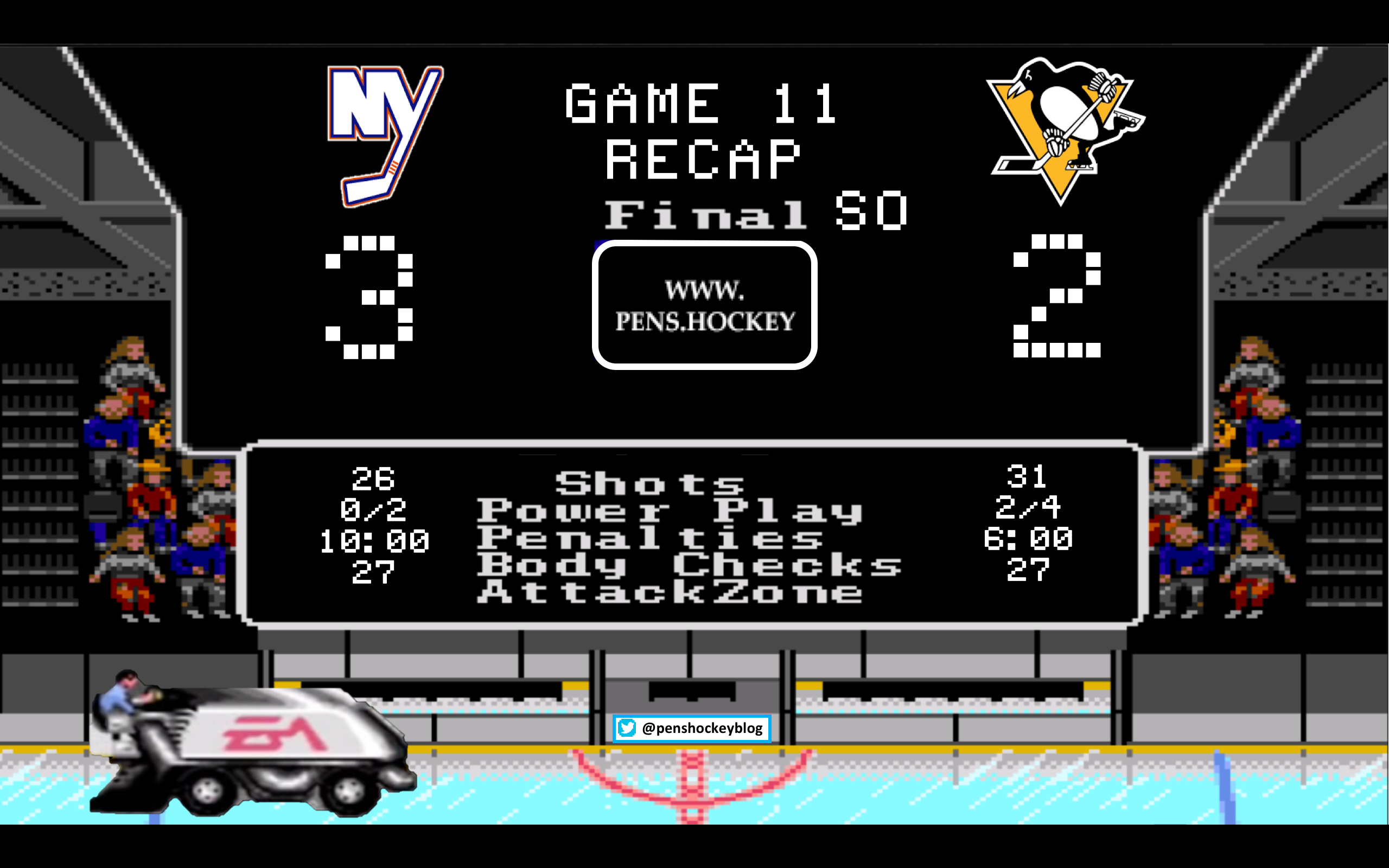 The Pens started the month of November just like they finished October, against the Islanders. The Penguins did get a little help in this game compared to the previous meeting thanks to the services of Letang getting back to the lineup. Letang playing was a wave a great news for the team who looked like a completely different group without him on Tuesday.

The game started off with a very similar feeling to the previous meeting, the Pens were getting some really good looks but things just weren’t developing. Early in the frame the Pens got a shot in the powerplay, the first unit wasn’t able to beat Greiss but the second was

For the fifth straight game, Dominik Simon is on the board (2G-4A).

That's the longest point streak of his career. pic.twitter.com/Kw4EZje0Cj

If you can sniff out and stuff rebounds like that you will stay on the second powerplay. 5 straight games with a point isn’t a joke, either. Solid drive by Jake initially, something you wouldn’t see the first unit do. Imagine playing defense against a powerplay that sends out the globetrotters first and then guys that drive to the net second, good luck.

The rest of the period played out a lot like the first period of the last meeting, kind of spooky ( that was a lazy Halloween joke).

Things are looking pretty even after 20 minutes of play. pic.twitter.com/Opv78RJ6N7

The first half of the second period was a lot of back and forth with a few ohh so close moments from both teams. Both goaltenders were bailing their teams out when needed as the game took on a “you try then we’ll try” feel as chances were exchanged at a 1:1 ratio. The Isles has a powerplay for 15 seconds before the refs made a rather weak call to even up the ice. During the 4 on 4 Malkin was interfered with and the Pens were going on a 4 on 3 powerplay. With the momentum in their favor the Pens brought out the big dogs but the Islanders were ridiculously good at preventing shots. As play turned to a regular powerplay the Isles took advantage of a pinching Letang, Malkin didn’t drop back to cover the vacated corner and Bailey was off to the races.

Murray looked like he wanted the poke check but couldn’t commit soon enough, huge opportunity for the Pens on the powerplay that goes the other way and it’s a tie game. The rest of the second would lean in the Isles favor but Murray stayed strong throughout.

Here's a look at your Penguins vs. Islanders stats through the 2nd period of play. Still very close. pic.twitter.com/iCJJnYxEYh

The first six minutes of the third period there was one team on the ice and they were not wearing blue. The Penguins absolutely dominated the rink and pinned the Isles into the zone for almost the entire first 6 minutes. Unfortunately they couldn’t get anything to go for them and the game remained tied until the Islanders entered the offensive zone for the first time in a year. Hickey was the puck carrier, Jack Johnson came out to challenge so Hickey threw a pass to the center the bounced off of Anders Lee and in. The Islanders tv guys applauded the play like it was some incredible thing. Anders Lee celebrated the goal like he meant to score with a 1997 era Tiger Woods fist pump.

This puck went off a skate, the post and in after the Pens literally ran this team out of the building the whole period… it’s a game of inches or something.

The Penguins (for the second time in the game) would be blessed with a pretttttttyyyy tacky penalty call and would get their fourth look at the powerplay. The first unit struggled initially and it appeared to be another failed attempt until Letang saw Malkin looking like a pit bull with the red tip coming out and fed him a steak, Malkin ripped a shot that went off an Islander stick and in.

Don't look now, but @emalkin71geno is one point behind the league-lead in points. pic.twitter.com/7Uz1sornZZ

Malkin continues his tear through the first part of the season, apparently spending your offseason hanging out with friends every day is good training.

Tbe remaining 8 minutes of regulation consisted of some of the best hockey you will see in November. Both teams were going for the win and both defenses were stepping up when needed. If you have a friend on the fence about hockey show them these last 8 minutes. If you have a young kid or relative that wants to learn the game, show them these last 8 minutes. When hockey is played this way the game becomes tighter, it’s why playoff games are so low scoring, and it’s why neither team scored to win in regulation but both earned a hard fought point.

Stats are very even as we head into the overtime period.

Overtime picked up right where the third left off. Murray and Greiss were absolutely insane, Murray first with a ridiculous blocker save on what should’ve been an easy goal, Greiss followed with a wicked glove snag on Kessel and this…

It’s the fucking Islanders man, why was the last 14 minutes of game time so much fun!? Despite their both efforts neither team could win in overtime. This may have been the first time I have ever wanted a tie, because after they went at it like that a shootout was just going to be a let down.

– Not gonna get too worked up with the team earning a point here. The Islanders were hungry and look like they have something to prove. 5-0 against the division to start the year ain’t too shabby

– No 5v5 goals is concerning, but I won’t harp on it as long as Brassard is out. Speaking of, Grant is a good filler… not sure how he was a full time starter in Anaheim