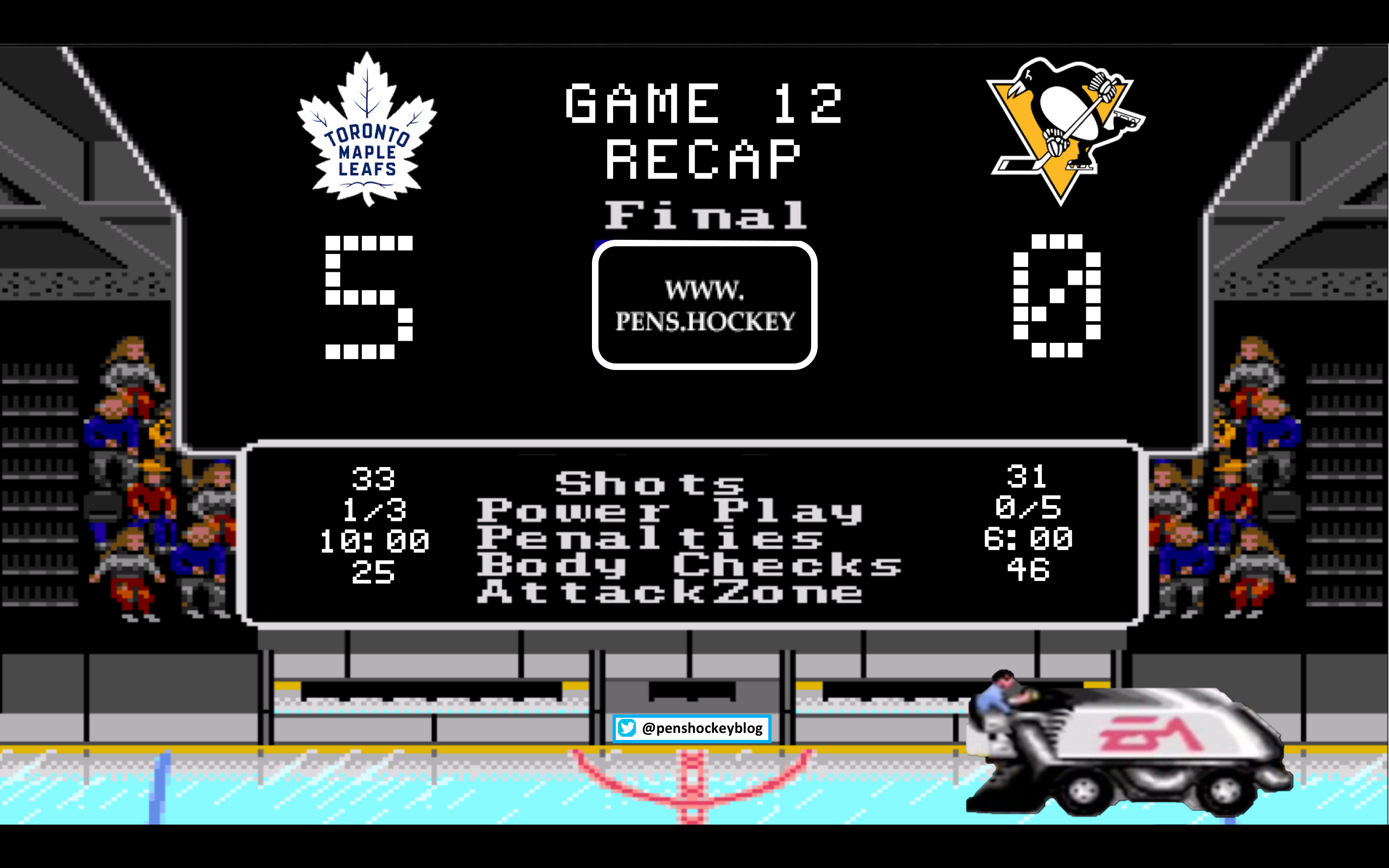 After losing both games of a home-and-home to the 2nd-place Islanders, the 1st-place Pens returned to the Paint Can for a quality HNIC matchup with the Atlantic Division’s 1st-place team, the Toronto Maple Leafs. 2 milestones to mention, as Carl Hagelin was dressing for his 500th game, while Jack Johnson hit the ice for his 800th. Important to note that Mr. Johnson will have exactly 398 more opportunities to lace them up for the Pens in the regular season before his contract expires in 2023. The last time these two teams played, the Pens handed Toronto their only shutout of the season. Would some retribution be in order for the Leafs or would the Pens regroup after a lackluster week?

The game started with a decent pace, but not too many shots. Oleksiak snapped his twig on a slapper and the play went the other way, but Murray shut the door on Kapanen with the right leg.

Immediately after the play, Marleau hooked Hornqvist and headed to the box.

The resulting PP was uneventful, with the Pens 1st unit looking for the perfect play, but feeding the Toronto PK with easy clear opportunities, instead. A few minutes after the penalty, Sheahan made a nice defensive effort and found himself, as usual, alone in the offensive zone.

3 minutes later, John Tavares would find a soft spot in the defense and deflect a shot from behind the slot past Murray. The play looked like it might reviewed for goaltender interference after 210 lbs. of Hyman landed on MMX, but the replay clearly showed that Jack Johnson banana pancaked the Toronto forward into his own goalkeeper. This would be a microcosm of  Murray’s night, as teams seem to be throwing everything they can into him.

.@91Tavares gets the scoring started with a slick redirect in the slot. #LeafsForever pic.twitter.com/xwzmDj5l5D

Letang made two horrific turnovers in the period. First, he delivered a D-to-D pass directly to Toronto F, Mitch Marner. Luckily, a diving Dumo was there to break up the pass. Moment’s later, Letang fired a shot from the blueline directly off a defender, which turned into a chance for Tavares that required a difficult save from Murray.

Pens started to wake up just in time to hear the horn.

Looking to step it up for the 2nd period. pic.twitter.com/G40W7dxF29

Before you had time to sit back down on the couch with your glass of Woodford, the Penguins found themselves down by 2…

Malkin with the laziest backcheck since McDavid watched Crosby humiliate the entire city of Edmonton in OT. That’s alright, Geno will be good for at least a point or two, right? Matt Murray with more Leafs landing on him than my yard.

Guentzel was can opened hard into the boards by a guy named Ohmygodov. The play looked so bad, Beau Bennett will be out 4-6 weeks just because he decided to watch the game from Russia. Seriously, is there a player in the NHL who takes more abuse than Jake Guentzel? He looks like he’s been filming Jackass 4 since 2016. As usual, he got up, grimaced, and stayed in the game.

There were plenty of opportunities. The Pens were given a 2nd and 3rd powerplay in the period, but they ended up looking as awful as the 1st. Sullivan even started his second unit at one point. The Leafs’ penalty killers are fast and aggressive and they use players with offensive ability who can burn you at the other end. They played well. Murray left the ice temporarily, causing concern among Pens fans remembering the abuse he had taken in the game, but returned after an equipment repair.

Morgan Reilly, went bardownski immediately after the 3rd listless man advantage and completely silenced the black and gold in the stadium.

Such a sweet sound.@mriles4 fires one off the iron and in for his fifth of the season. #LeafsForever pic.twitter.com/brPxDyQQD1

The building still had energy, however, as apparently 8,000 frat boys in blue and white decided to cross our Northern border and infiltrate the Steel City. With 8 minutes left in the 2nd, all the Pens had to do was get one past Andersen to have a prayer in the 3rd.

Back to the liquor cabinet.

I’ll be honest, down by 3, the Pens game was relegated to the laptop, while I put the Bama game on the TV for the 3rd. The period was more of the same with the Leafs focused primarily on defense. The Penguins hit their 2nd post of the game, Andersen wasn’t giving up many rebounds, 99% of the offensive play was kept to the outside, and the passes were as bad as the haircut I got yesterday.

Towards the end of the period, Pittsburgh’s springier new $300k boards set up Rielly beautifully for his second goal, this time on the PP.

Then Penguins fans got to watch this on the concourse TVs as they headed for the parking lot:

Hyman's rebound bounces off of Hornqvist and in. 5-0. pic.twitter.com/lHSdzcq2Te

In all fairness, it’s better this happens when you’re down 0-4 in November than when you’re tied at 2 in May. In even more fairness, those two situations aren’t mutually exclusive, so I’ll shut up now.