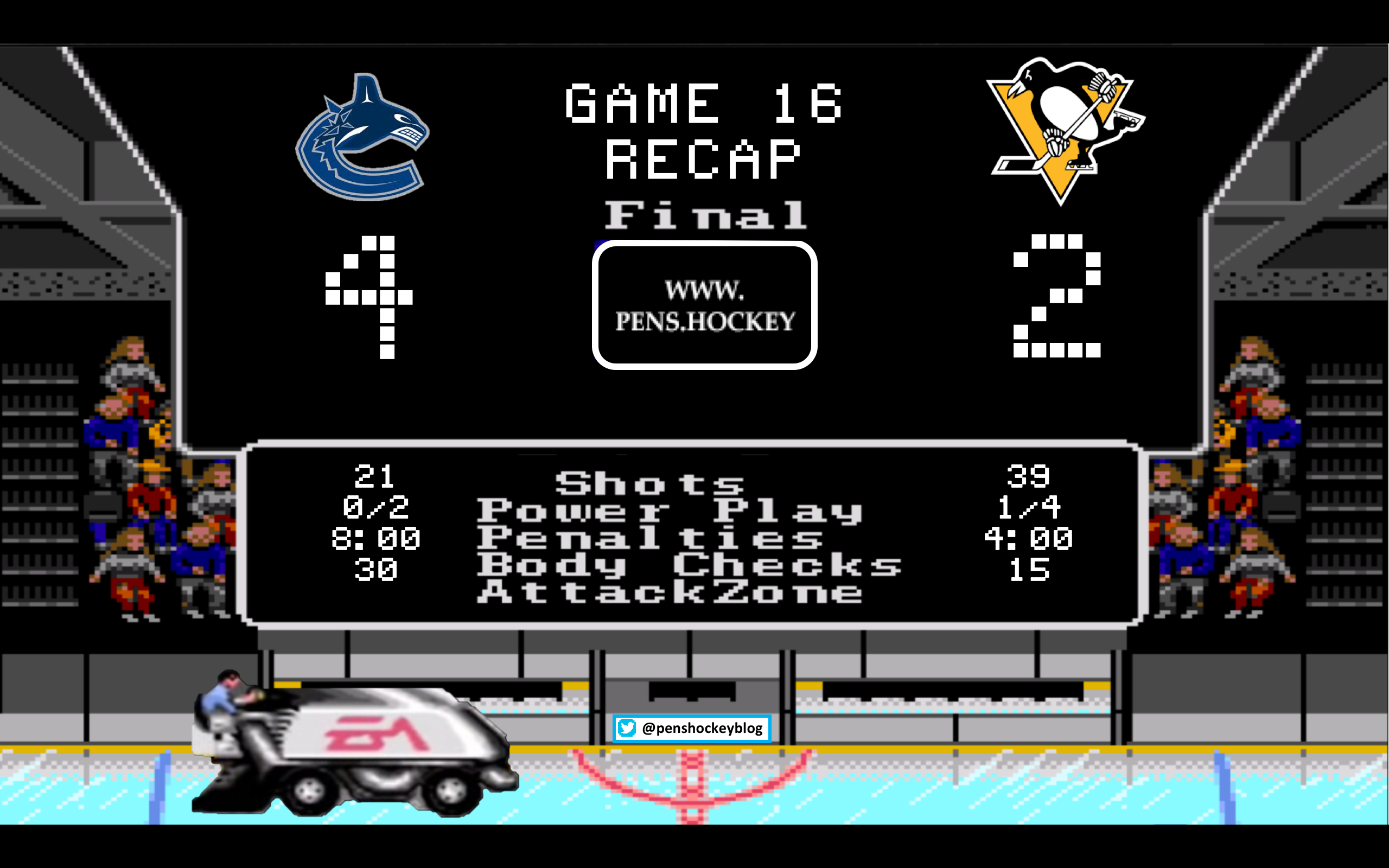 The Penguins ended their 2017 Canadian road trip last night in Vancouver, a trip which saw them go 1-3-1 while also concluding their season series against both Winnipeg and Edmonton. Yes, that’s right… the NHL can not advertise another Crosby vs McDavid matchup this year because they are done playing each other and it is only November 5th.

I digress, Derrick Pouliot disappointed by not scoring a goal for the Penguins. Also because the schedule is hellish and there isn’t time to make a separate post I’ve decided to sprinkle in some Treasure Grove in recaps:

It’s kind of crazy with all of the talented players the Penguins have had that this dude is the last to do this. Spoiler alert, Gary McAdam is still the last player to do this as Letang was pointless and Malkin went pointless in this one.

In 5 seconds the puck went from Guentzel behind the net to Malkin on the goal-line to Crosby to Kessel back to Guentzel on the door step. 5 seconds. That is absolutely filthy. Since it’s Sunday and you can ask for forgiveness of your sins go ahead and watch it one more time:

The Penguins would continue looking good but after failing to convert on multiple chances the entire team decided to honor Derrick Pouliots tenure by taking a collective dump on the ice:

Bad clear by Maatta, even worse attempt at defending from Letang who attempts some sort of front-line charge with a Fleury poke check hybrid that did nothing except get in Murrays way.

Nothing else going on in the remaining 12 minutes. This is Vancouver, after all.

weird use of quotation marks, but okay. Both Corrado and Letang would return to the game, and Letang decided to make a grand reentrance by getting a sweet assist on Boesers second of the night

Kris Letang with the casual no-look, behind the back, pussy tap pass to the blue line instead of manning up and just clearing the fucking puck.

Phil Kessel then had a glorious chance off of a turnover that Markstrom made a really impressive save on.

The Pens shooting percentage is balls right now, and saves like these aren’t helping it.

About 3 minutes later Phil Kessel lost his balance and fell to the ice, grasping his head in discomfort.

By fell I mean he was slew footed:

Pretty ridiculous there considering the puck was in front of both players. I’m sure this will result in a hefty $0 fine.

Kessel stayed on the bench but was later removed after a concussion spotter called down and told the Penguins to put him into protocol according to Sullivan:

One slew foot that wasn’t a penalty probably ends Kessels “iron man” streak at 556 consecutive games; he hasn’t missed a regular season game since the 2009-10 season, aka when Michel Therrian was still coaching the Penguins.

Nothing else of note happened this period.

Nice foreshadowing in this tweet, as we would see more yellow in the form of Letang piss.

The last period of the last game of a road trip with Olli Maatta, Kris Letang, Frankie Corrado all going into the boards and Phil Kessel out of the game…

The Penguins weren’t mailing it in which was somewhat encouraging, and Mike Sullivan was wisely spreading out his roster in this physical game to help get certain players off the ice. Turns out it was the right move less than 5 minutes in:

This is actually a really nice goal for a few reasons:

The hopes of winning lasted for one minute and seven seconds, and then that Boeser bro notched is hatty:

Goal one: Letang and Maatta. Maatta turnover and the most bizarre line of attack from Letang you will ever see.

Goal two: Letang and Maatta. Turnover by Letang, everyone else stops moving

Goal three: Dumoulin and Letang. Dumoulin covers his man perfectly, Letang is trying to remember if he scheduled his stylist appointment for tomorrow or Monday

The goal was the back breaker and the Penguins just wanted to go home without losing anymore bodies or limbs. With 5 minutes left Hoe Whorevat scored to make it 4-2:

The team is frustrated, and Sullivan made a pretty generic statement regarding the frustration:

I dated a dentist a while back. Whitest teeth I’ve ever came across!

I’ll be here all night !

A Snowball In Hell