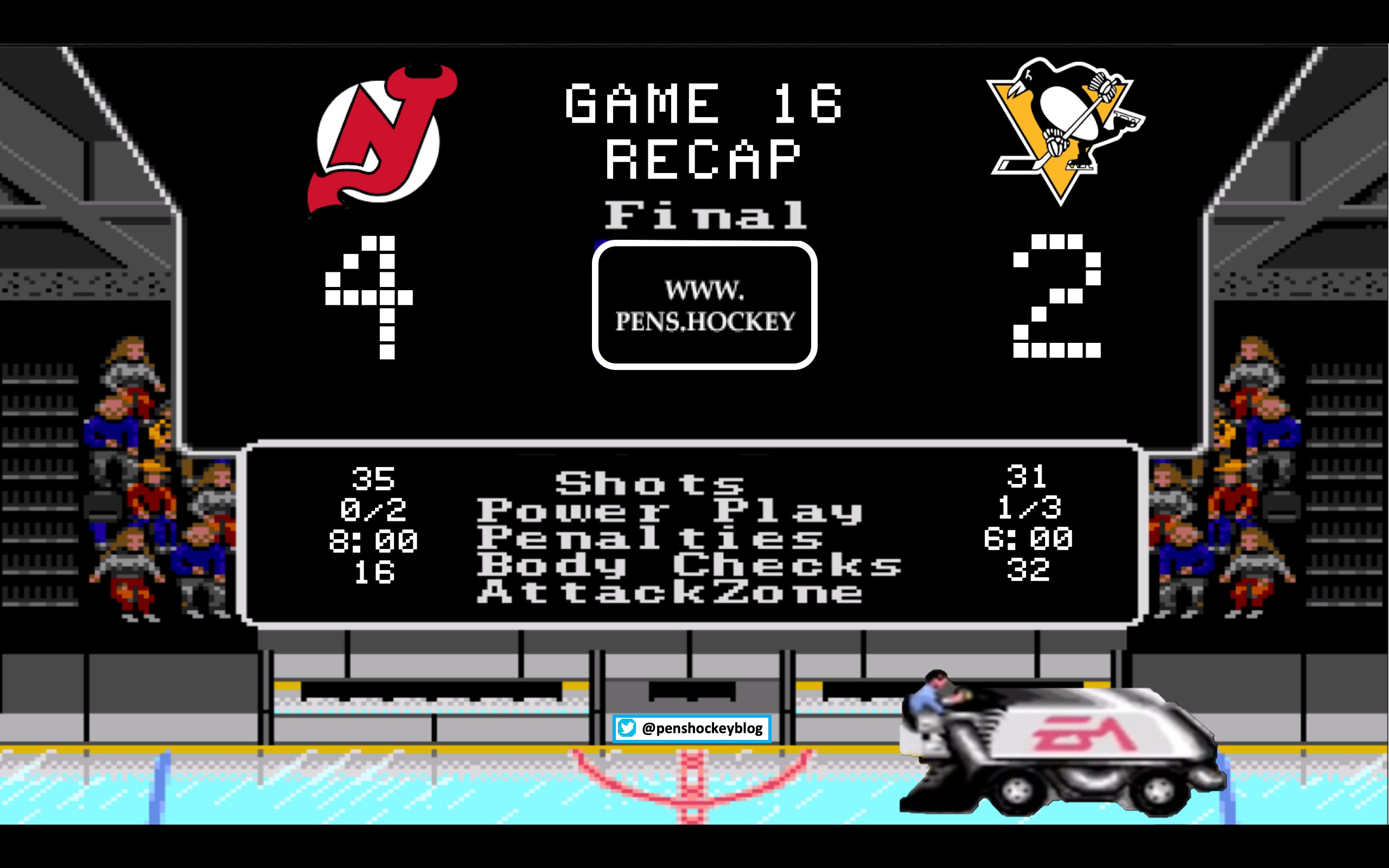 The Penguins were in New Jersey last night to take on the Devils but you already knew that. You also already know that Mike Sullivan announced Casey DeSmith would be starting his third game in a row, and you know our stance on the matter because you read yesterday’s gameday. As promised, DeSmith started and the lines did not change:

One thing left out of the gameday was that DeSmiths string of starts, two games where the team only allowed 2 goals to the Caps and Coyotes, also coincides with when Johnson was paired with Letang. Obviously we are not trying to take anything away from DeSmith, but one of the biggest changes for the team the last two games is Kris Letang potentially saving Jack Johnson (and Jim Rutherford) from embarrassment (this sentence was written before the game started, and now as usual we look stupid). Of course, when we see Brent Seabrook do this Jack Johnson doesn’t look bad at all:

$6.875 million for the next 5 years for a current 33-year-old defender that plays a two on one by doing the worm.

Much like the previous meeting between these two teams the Devils had a 1-0 lead before most of us had the game on.

DeSmith with a great initial save on the doorstep but there were too many unmarked Devils, this is what is known as a dangerous scoring opportunity. It’s so obvious when Kris Letang is trying to do too much, you know he wants to help his struggling team so he tries to become something he isn’t, a noble cause that ends up hurting more than helping. Here he follows Hall all the way to the blueline, where Rust already was: 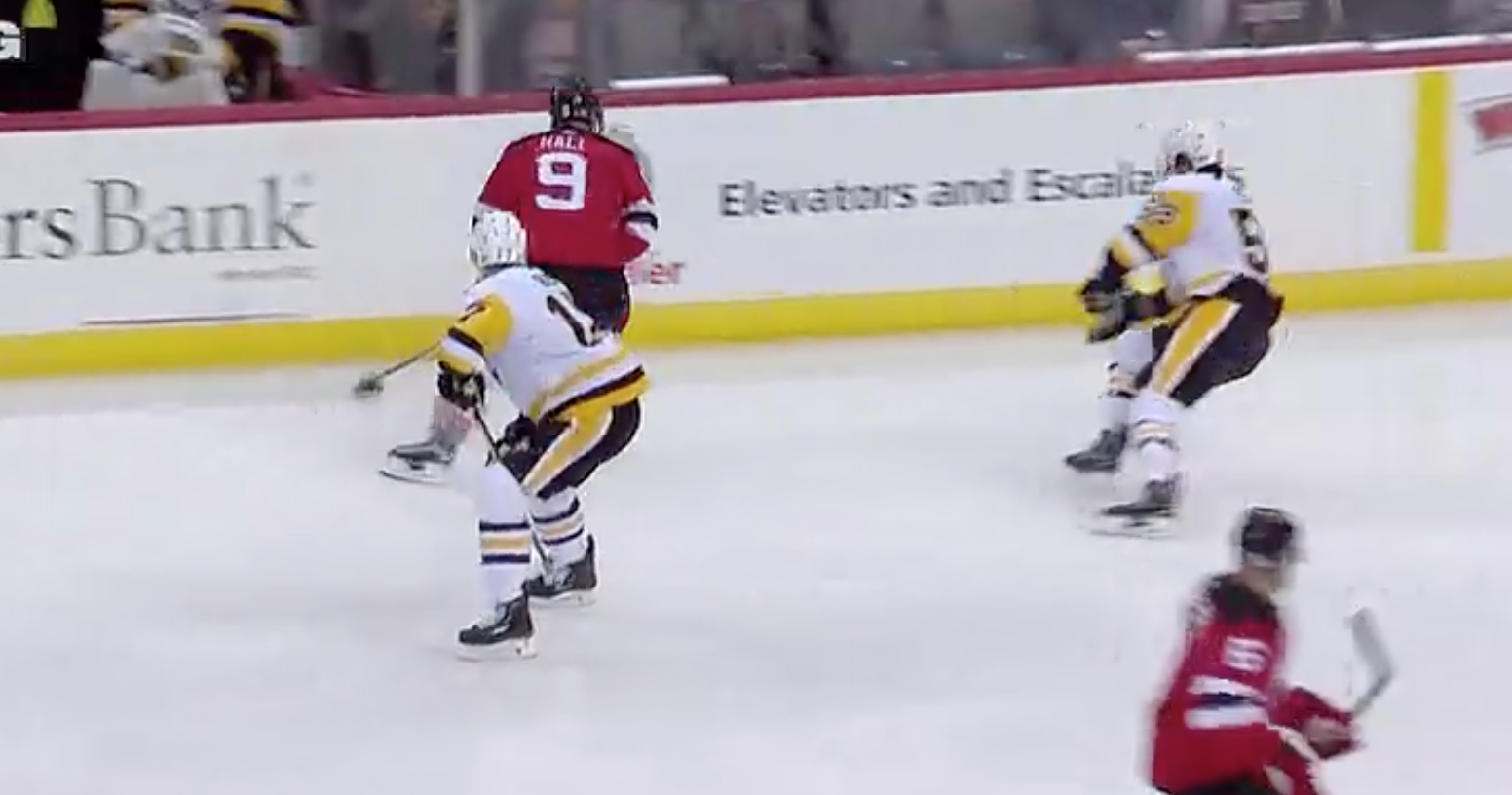 Two Penguins covering a guy at the point with the puck on his forehand and the wall to help him, and Jack Johnson being the lone guy covering the other forwards in front of DeSmith. Hall hung the bait and Letang took it. Following the initial shot and save Simon was caught staring:

6 men on the ice, three of them (Rust, Johnson, DeSmith) did their jobs, the others did not. This is not the type of team defense that leads to successful postseasons.

Mike Sullivan putting his fourth line out following the goal is everything you need to know about how happy Sullivan is with having four lines again. The Devils continued their pressure following the goal and the Penguins looked like they still don’t know how to play against the Devils. At one point the shots were 12-4 New Jersey but for the most part the shots weren’t too challenging for DeSmith. 6 minutes in Evgeni Malkin was called for hooking a player behind the play, stupid play by Malkin but one that also probably goes uncalled 30 times a game, doesn’t make it right but just saying. The Devils powerplay wasn’t anything special and the Pens killed it off with relative ease. The team picked up some much needed momentum following the kill and Sullivan got his lines rolling as the Pens erased the shot differential while getting some good looks at Kinkaid. The Devils took a penalty at the 12 minute mark when Noesen got the twig up high on Guentzel. If you read our gameday then you know the Pens brought the top powerplay unit together again, and they put on a clinic before Sidney Crosby was given way too much time.

Can you Phil the thrill?

Phil Kessel ties Sidney Crosby for the team-lead in goals (8) with this power-play tally. pic.twitter.com/qUQbZ4Flod

You just cannot give Crosby this much time to look everything over, though to his credit Sid buys it for himself by cradling the puck so quickly. The pass was the definition of threading the needle as it went through Greene’s legs and right to Kessel’s tape.

Crosby's pass on that Kessel goal should be considered a war crime pic.twitter.com/fpd1FBpAv9

Look at where this gif is at the beginning, and then appreciate the vision of Crosby to see that pass in the making and then making it. Unreal.

The Devils had a stunned response following the goal but the Pens couldn’t capitalize. Pittsburgh went back on the powerplay in the final minutes but Kinkaid stole the show and kept the game tied after one.

Just a few numbers while we wait for the 2nd period… pic.twitter.com/Hzpt5tRqN7

The Penguins showed improvement by playing the first two minutes of the period without allowing a goal. They also looked like a really good hockey team for the first five minutes as they pinned the Devils in their own zone forcing Ben Lovejoy to take a penalty. The Pens powerplay failed to convert as Kinkaid continued to play strong. The Devils used the kill to get their feet going in the period, moments after DeSmith made a stellar save on Taylor Hall on the doorstep it was Damon Severson ripping one down main street to give the Devils the lead.

Moments after DeSmith makes another huge save in a tough situation the rebound came to Jack Johnson and this is his scenario, the puck his on JJ73s stick here: 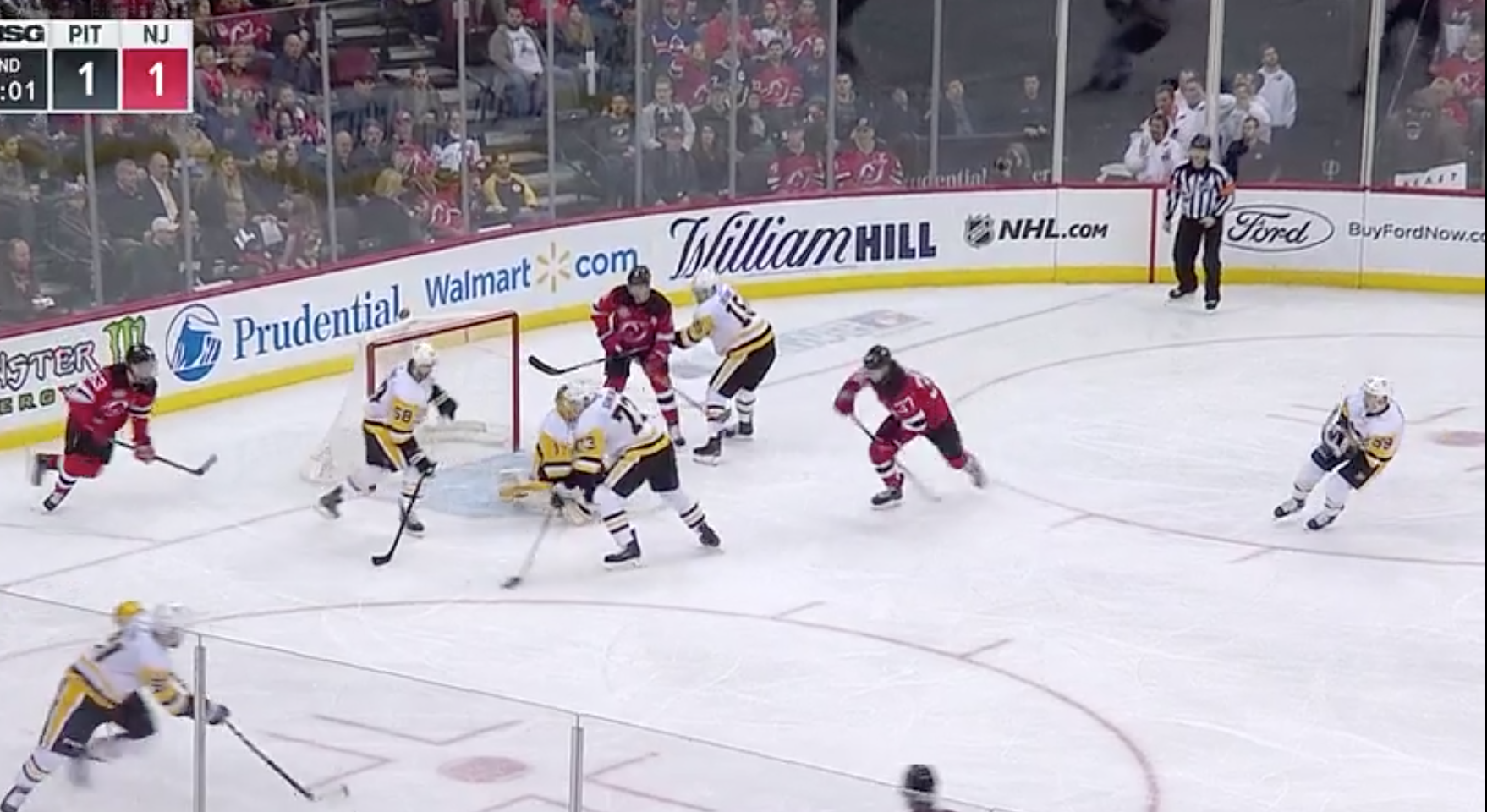 He’s looking at Kessel, it’s a simple backhand flip to Phil and this puck is out of the zone and the Penguins have numbers as both Phil and Guentzel are ready to transition. He could make a four inch pass to Letang and the same scenario happens. Instead, for some reason he passes this puck directly into the corner where no Penguin is located, the Devils recover and it’s in the back of the net. Two goals off of two poor defensive decisions by the top pairing against the Devils top line.

The teams opened it up following the goal both teams were transitioning effortlessly but the Devils were definitely getting the better scoring chances. With 6 minutes left Kessel dumped a puck in from centerice and took a hit he didn’t like, as he engaged in some back and forth the Devils were busy making a beautiful 3-line stretch pass to spring a mini-breakaway for Braff who beat DeSmith easily though it looked like DeSmith knew the play was dead. All of this happened while Kessel and some dude named Seney were scrapping on the ice at the other end after Seney told Phil that he replaced all his hotdogs with the vegan versions. The refs got together and determinedthe whistle blew before the puck was shot (which it did when the scrum went to the ice), so the goal didn’t count and the Devils were heading to the powerplay.

The Devils followed that up with two quick shots from within 5 feet that DeSmith turned away keeping the Devils off the board for another successful kill.

The rest of the period played out the same, I know it’s been said but it is so nice to have a fast Devils team to play against. Kudos to Hynes and Shero for adapting to the speed of the metro, but also screw them.

The third started the way the second was played, the Crosby unit went to work early on an extended shift but couldn’t get anything out of it. 5 minutes into the frame Crosby picked up a puck at his own blueline and turned on some jets we haven’t seen in awhile as he out-skated the entire Devils team to drive in on Kinkaid. Kinkaid made the initial save and Guentzel cleaned up the rebound, the Devils would challenge but the goal stood

First of all this was an incredible burst of speed from Sid as he continues to look absolutely determined to drag this team to greatness following the losing streak. Secondly, the call could have just as easily gone the other way, and if it happened to the Penguins we would be bitching and moaning about it but chel gonna chel. My suspicion is the contact with Sid moments before he shot the puck was the determining factor, even so Kinkaid almost saved this puck twice which is kind of nuts… not sure Toronto saw the overhead angle shown above, the play looks much worse from that view and much better from this one

Look how Sid uses his reach to protect the puck from Coleman, and then how he brings it back in to a scoring position while using his edges to slow down. Easiest goal Guentzel will ever score.

Following the goal the Prudential Center faithful were loud and heckling the refs, it was kind of fun which isn’t what you think of when you think of games at The Rock. It went from fun to Montreal in like 30 seconds as every time a Devil fell they wanted a call.

Just a few minutes later Crosby lost an offensive zone face-off and the Devils carried it up ice as a reunited Letang-Dumoulin pairing looked out of sorts. Letang was caught pinching, Dumoulin went all the way to Letang’s side to take away the play while Taylor Hall skated down Dumo’s lane uncontested. Zajac made a nifty feed to Taylor Hall and Hall beat DeSmith through the legs to give the Devils the lead again.

Pretty easy breakdown of this goal:

Letang pinched, Kessel covers too late and Dumo over commits to cover for Letang. Three negligent mistakes defensively will burn you more often than not. These are also the scoring chances we were watching Murray get burned on in the first 10 games of the year, interesting that they happen as soon as Letang is back with Dumoulin. These are also the scoring chances that got the Penguins eliminated by the Capitals, like this exact play in game 6, interesting that they continue to happen.

With under four minutes left Sullivan loaded up with a Kessel-Crosby-Malkin line but they couldn’t get anything done despite some good looks. This was the first time that I can remember during Sullivan’s tenure that he’s thrown Malkin and Crosby together at even strength… I understand the move completely though it’s also been a sign of a coach out of options for his three predecessors. The Pens would pull DeSmith with over two minutes left, the Penguins tried to get some looks but really couldn’t get anything going. They finally got set up like a powerplay and after some back and forth between Letang and Geno, Letang put a shot right into Noesen, like RIGHT INTO HIM, with the goalie pulled Letang tried to fire this shot through 7 players and a goalie…

Now, though the decision to shoot here absolutely cannot under any circumstance be made unless you’re sure it’s going to get to the net, this isn’t entirely on Letang. He and Malkin exchanged the puck three times and look where the other four forwards are. It seems the idea was for either Letang or Malkin to rip a shot and let the four guys low bang home a rebound. Why would you use this strategy when it’s the opposite of what you do with the powerplay? So many coaching questions in this game. Had the team spread out just a little Letang could get this through but literally one defender is covering Sid, Phil, and Hornqvist. ONE GUY.

Noesen threw the puck up the ice to Taylor Hall after the block and he dumped it into the empty net to give New Jersey their second win over the Pens in eight days.