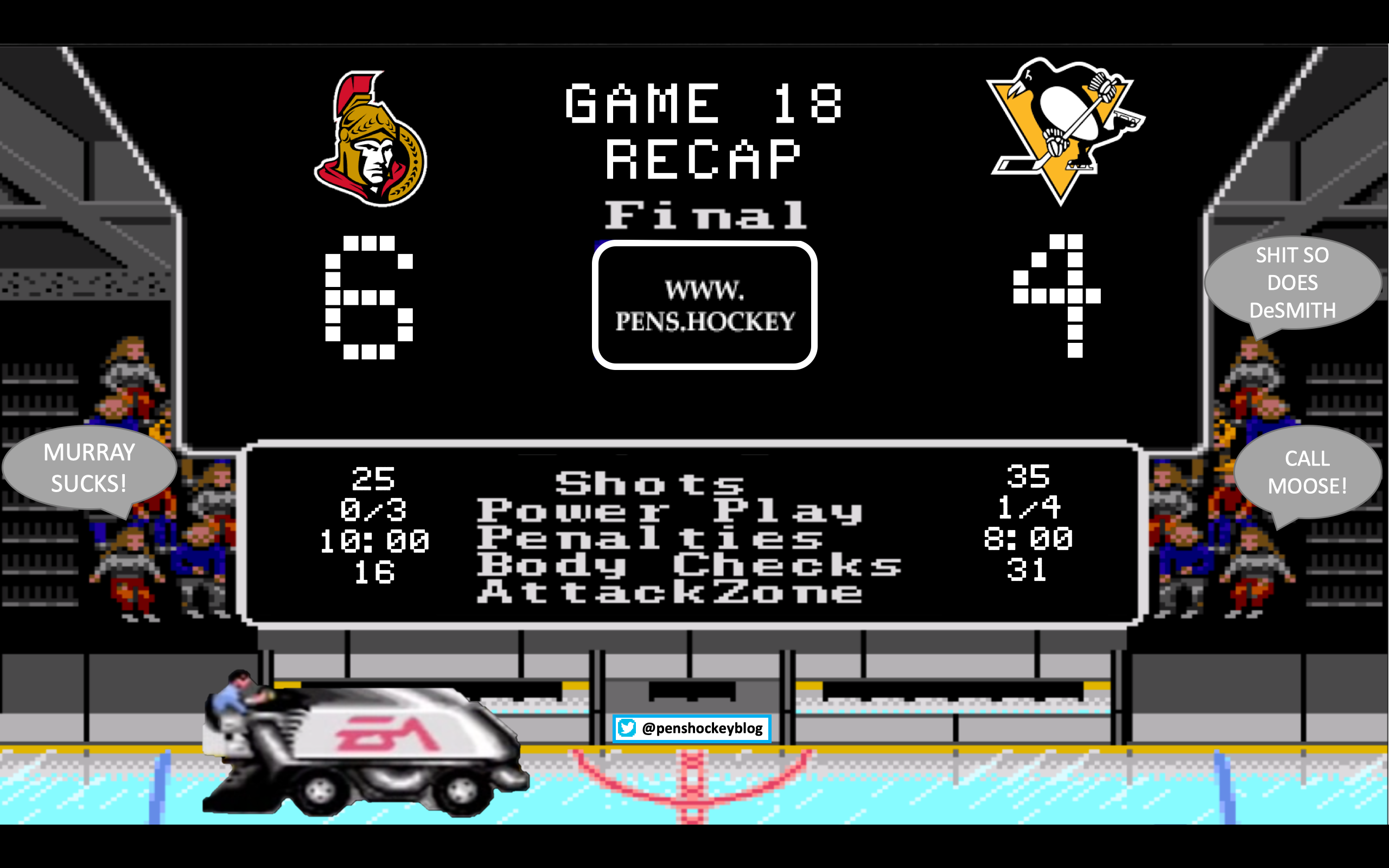 The good news for the Pens was that Brassard was back. Sullivan used this as a chance to bench Riley Sheahan and play Daniel Sprong.

Welcome back to the lineup, Brassard! pic.twitter.com/HQZjAWE9VA

Interesting decision to scratch Sheahan over Cullen, as soon as it was announced I searched all over Twitter for a  Sheahan trade but at least as of this writing it was just a coaches decision. I’m not saying Sheahan hasn’t been good enough to avoid being scratched, but Matt Cullen is 42 and nowhere near the Matt Cullen the team didn’t resign two years ago. Also interesting is putting Sprong with Simon, who has been Sid’s winger lately. I wonder if these are the same lines when Sid returns? Is Daniel Sprong finally going to the top 6?

After promising the season would change in one shift during this game Patric Hornqvist took a puck to the forehead in warmups, off his own stick, because the Penguins are in a rut like no other right now.

The game started out just fine, looked like two AHL teams playing in an NHL arena, to be honest. The Pens would get an early powerplay 5 minutes in when Drake Bateshisson tripped Simon. The Penguins powerplay did not score. After a minute of 5v5 Matt Cullen took his 23rd penalty in two games, but the PK was able to bail out granddad. 5v5 play carried on for 20 seconds before the Penguins were going back to the powerplay. This time they were able to get some good looks, and Kris Letang found out what happens when you don’t shoot it directly into a defenders skates

Perfect screen by Hornqvist in front as he takes away Anderson’s view. We are bragging about point streaks against certain teams now? Bizarre.

As Phil faced a literal parting of the red sea he decided to pass this puck to his left, which was intercepted and turned into a three on one for the Senators. Murray made the first save, the rebound bounced to Tkachuk and the game was tied.

Murray will want this rebound back for sure as yet another opponent is not picked up by a forward. Tkachuk would’ve been Kessel’s man in this scenario as well, so not only did the forward create the scoring chance against he also failed to get on his horse and cover his man. Just another breakdown added to the list.

The game would be tied for 2 minutes before the Senators kept the puck in their zone, Chabot fires one from the point and Mark Stone, an Ottawa forward standing directly in front of Matt Murray with no Penguin around, deflected it top shelf. Dumoulin and Johnson handle the player behind the net, as the puck comes out to the point notice Brassard. 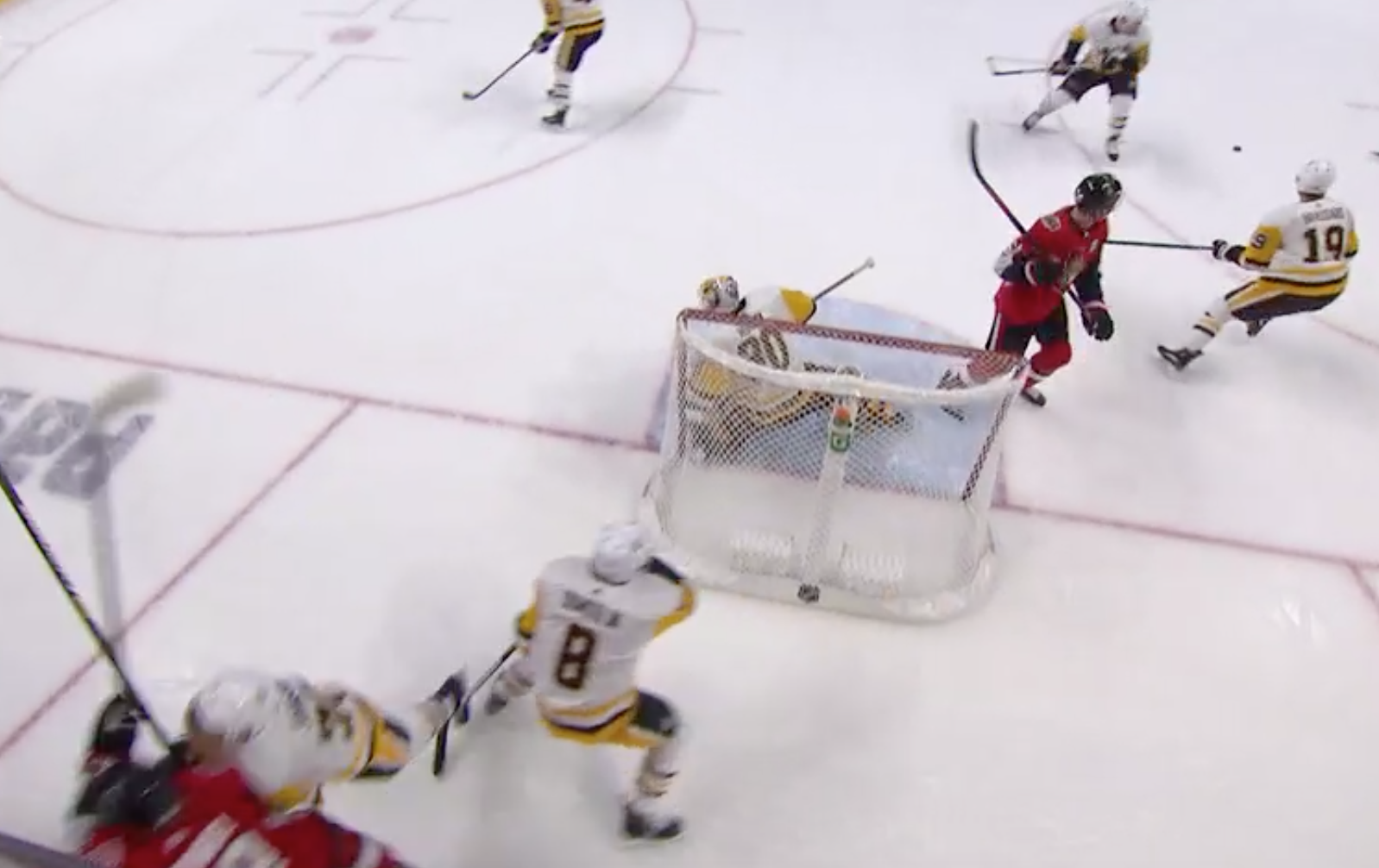 First, it would be nice if this puck couldn’t get through three Penguins and all the way to the point. Second, this wasn’t a bad defensive play and a good decision by Johnson as Dumo chased the man behind the net Johnson recognized his spot was vacant and could pursue. Look at this image below and remember that the only two players moving are Dumoulin and Johnson. 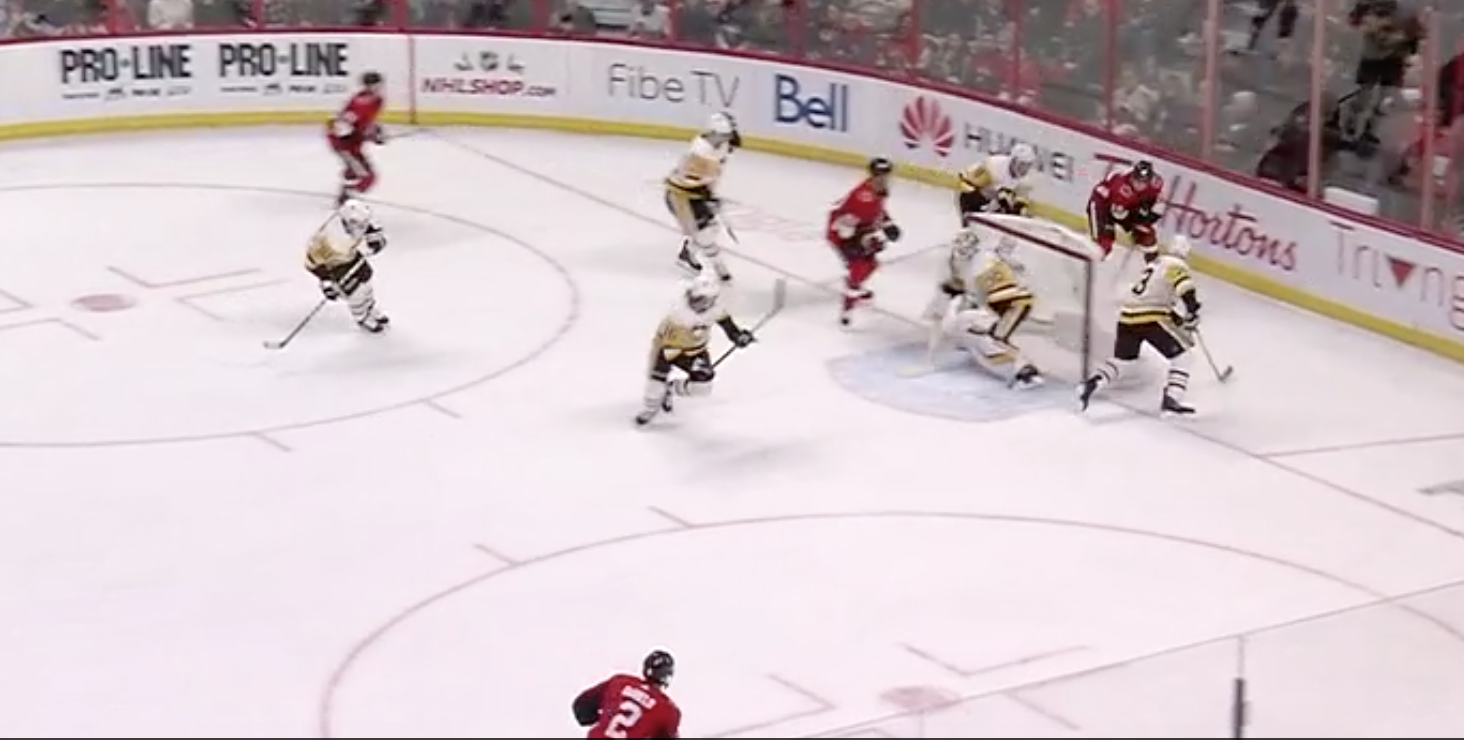 From this image the Penguins are in great position, you can even see ZAR moving over to cover the point. Unfortunately for some of the players, the Senators kept moving and the Penguins acted like they were the above photograph, trapped in a pose. As the puck heads to the point notice Brassard in the two images above, and then look where he ends up when the puck is shot: 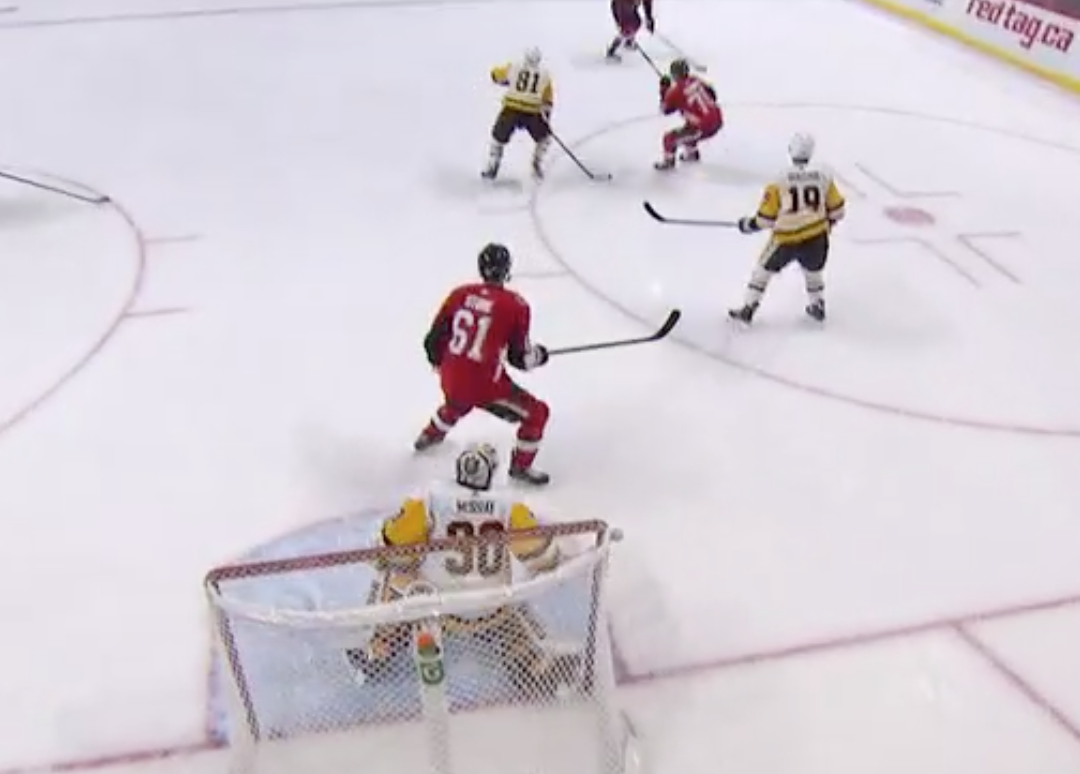 This was going to be an easy defensive stop, no question about it. This is the attention to detail that is completely lost on this team right now. Brassard gets caught puck watching as the puck goes from goal line to the point and from the point to the goal, and doesn’t react at all to either puck passing him or to the opposing player he was once marking. Fucking hell man, play some defense. So far two goals scored by two men left open by forwards, not good Bob.

Of course, it wouldn’t be a complete team effort if only the forwards made mistakes, and two minutes later Jack Johnson would make the most ridiculous pinch since St. Patricks Day and the Senators would go up 3-1 off of, you guessed it, an odd man break.

Here is the overview of when Johnson finally gets to where he was pinching. 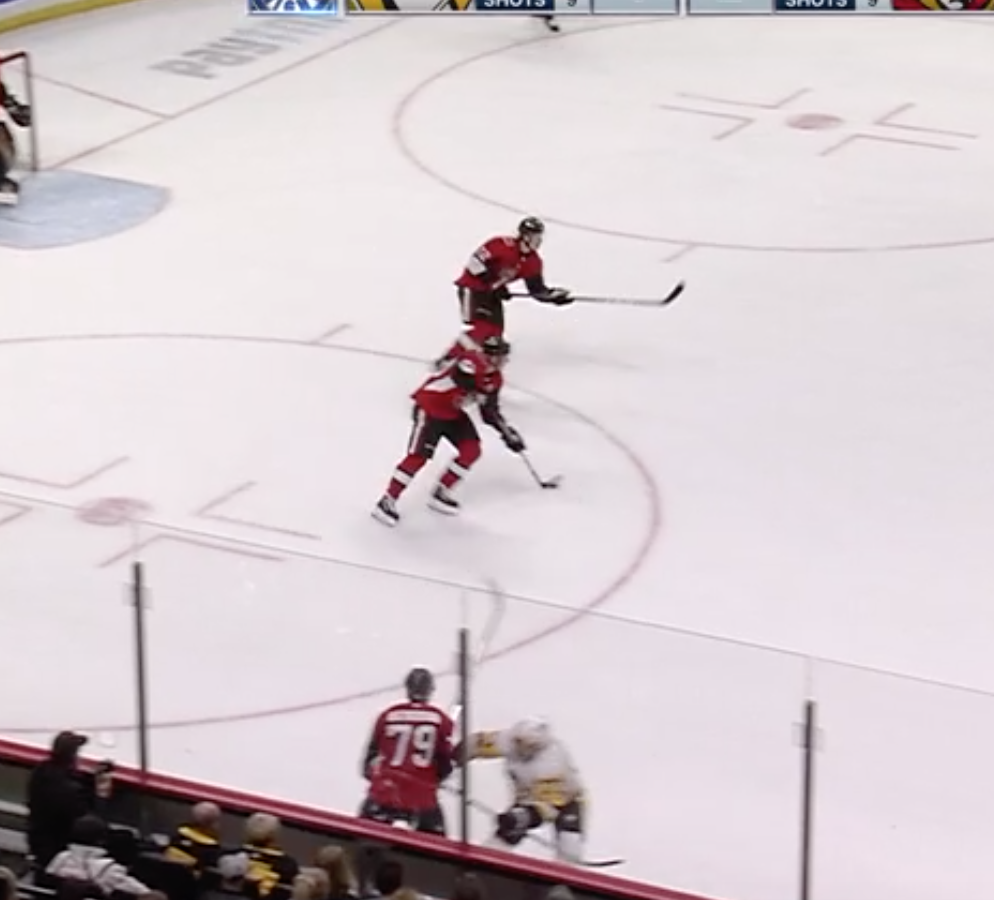 This is a systemic breakdown and it isn’t an easy fix. The team could tell the defenders to not get engaged, not make aggressive pinches, but they do not have that luxury because the forwards aren’t engaging enough offensively. If the team was scoring with all four lines it is easy to tell the defense to focus on defense. When nobody is scoring you can’t fall into a shell or you get Mike Johnson era games. This pinch was atrocious, however, and there is a way to coach that. I don’t think the Penguins should work on anything in practice other than defensive breakdowns and video review. No clue how a joke like myself can find these issues but the pros getting paid can’t make adjustments needed.

The Penguins, fortunately, got out of the period only down 2. Matt Murray took a ton of blame, I don’t care, would it be nice if he made one of the three saves? Sure. Would it be better if he didn’t have to go through this from the Ottawa Senators? Yeah. Sullivan in the tough spot, only down 2 but knows he has to pull Murray which he did.

Olli Maatta with the turnover of a lifetime gave Stone a breakaway the DeSmith couldn’t even come close to. Wouldn’t surprise me if Maatta is traded by the time you’re reading this. Statistically, advanced statistically, eye testically, yardstick at Lowes, it doesn’t matter what you are using to measure him Maatta is this teams weakest defender. In a 3-1 game with a powerplay, this play just cannot be made. Here is Maatta skating back into his own zone. He is looking to pass and you can see nobody is there. He is on his backhand. Why not just whip this off the boards on your forehand? Why knowing you are slow do you even think a pass here is a good idea? 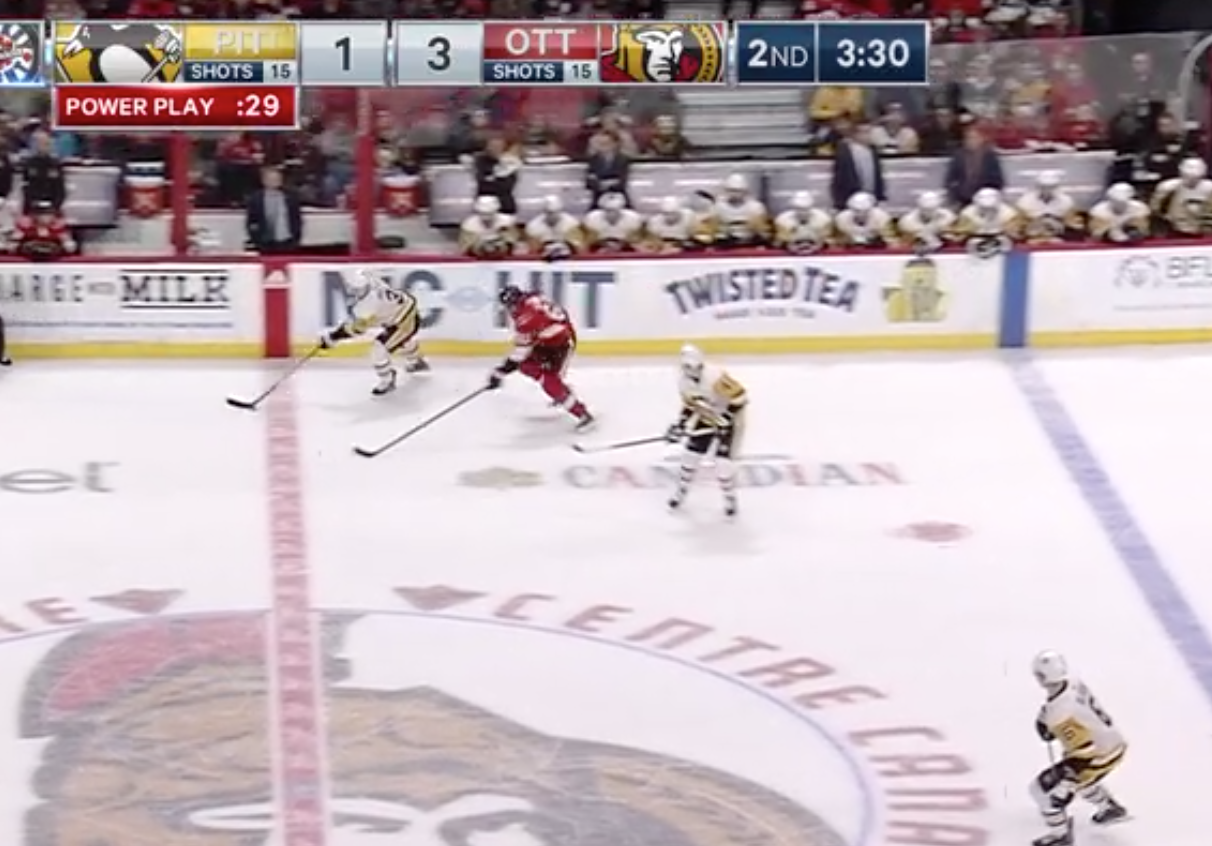 He attempts the pass to literally nobody, and it is easily taken away. 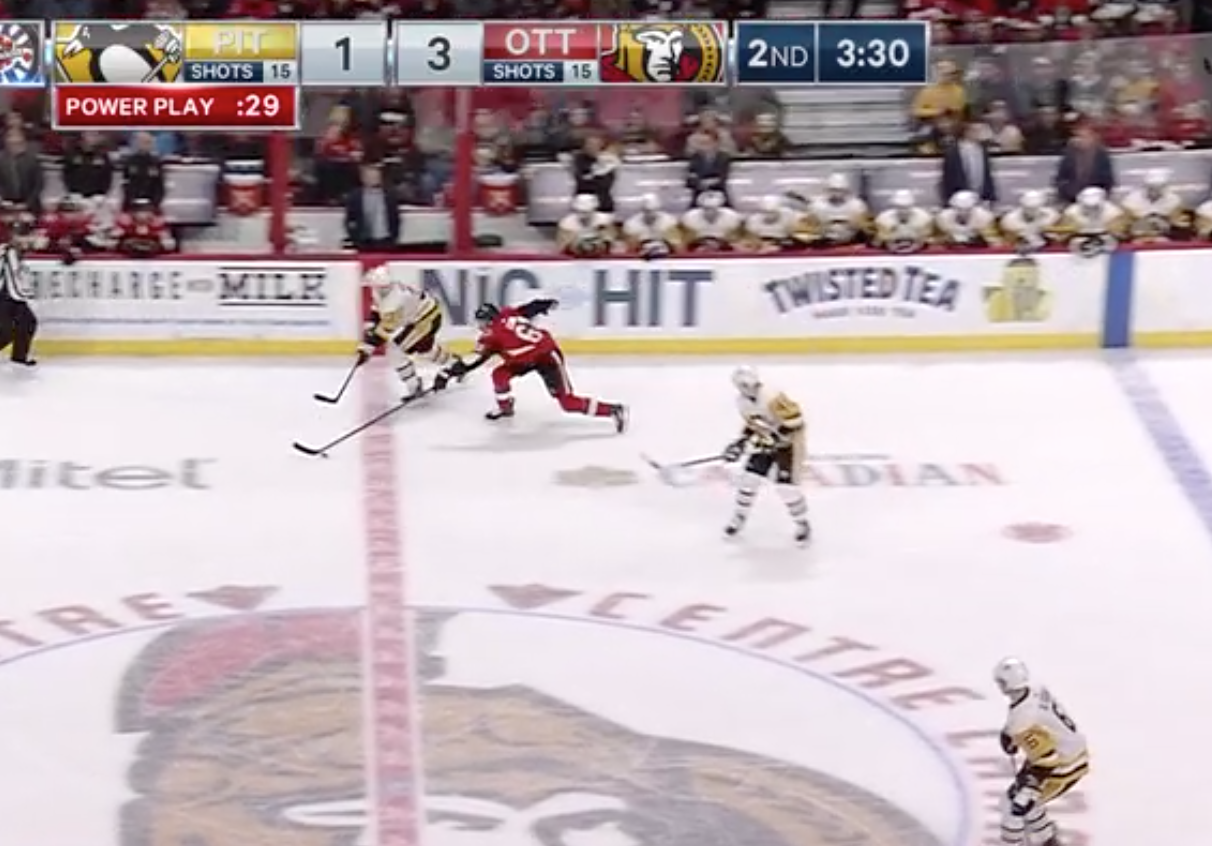 Four goals by four players who had nothing between themselves and a Penguins goalie except ice.

Not even a minute later the Penguins left another man open and it was in the net again. You better believe that this goal can also be put on one player. 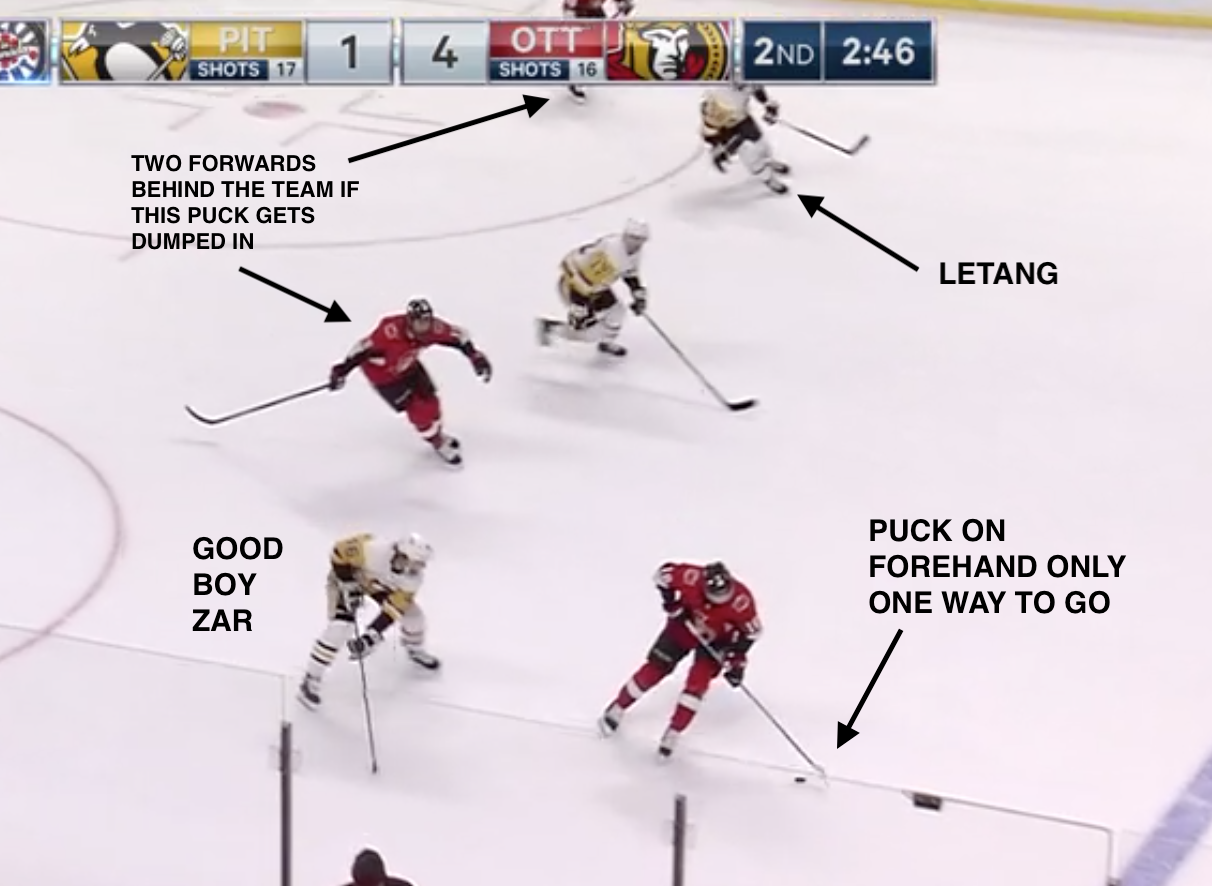 Not pictured, Evgeni Malkin has dropped back to goal to cover for Letang, good job Geno. Other than the two forwards being on the wrong side of the Pens forwards this isn’t a completely threatening situation yet, but it is one the team shouldn’t be in. 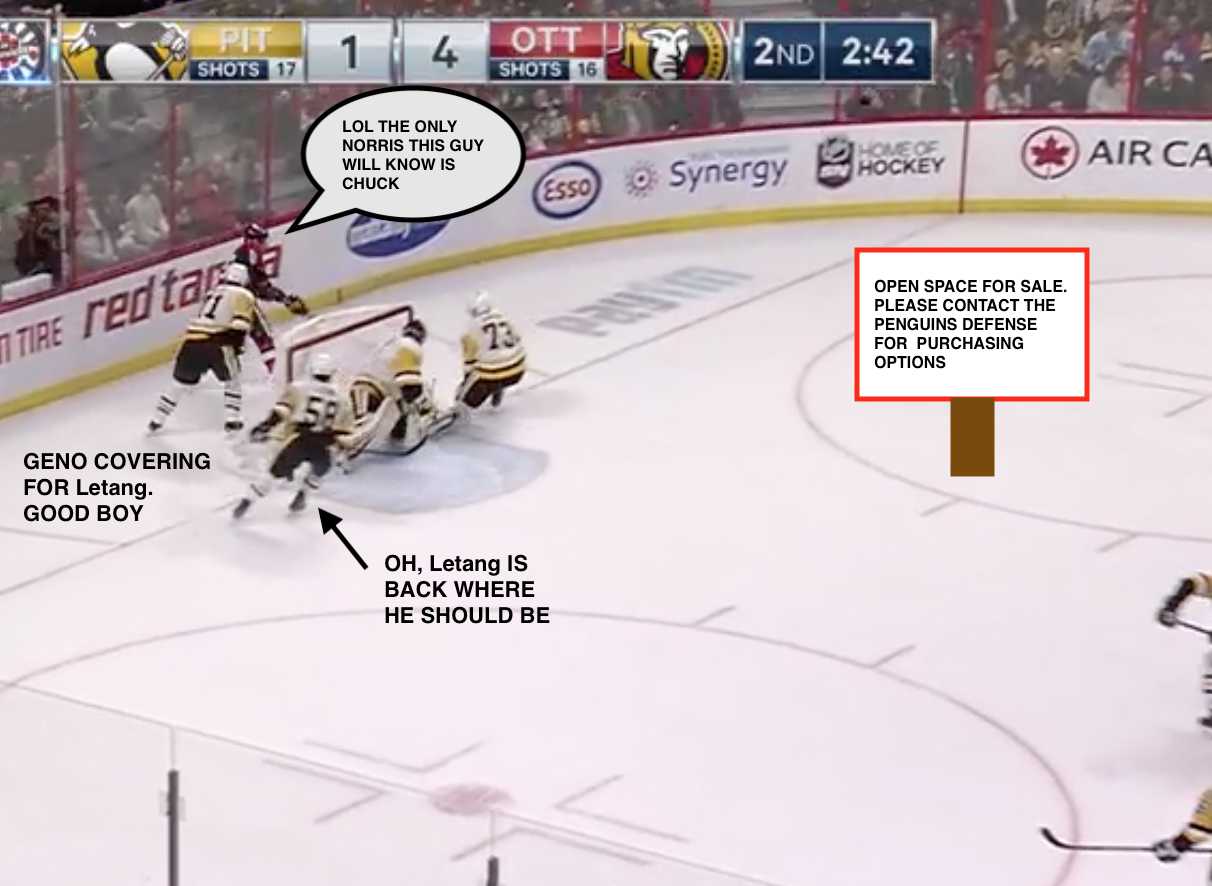 So Letang went from covering the point back to his original position, but Malkin was already there. Now there are three Penguins on the goal line and only one Senator. Math hasn’t been Jack Johnson’s strong suit but even he figured this one out quickly and tried to block the pass. Unfortunately, he didn’t block the pass, and Matt Duchene became the fifth consecutive goal for the Senators as he took a shot, get this, without anyone between him and the goalie. 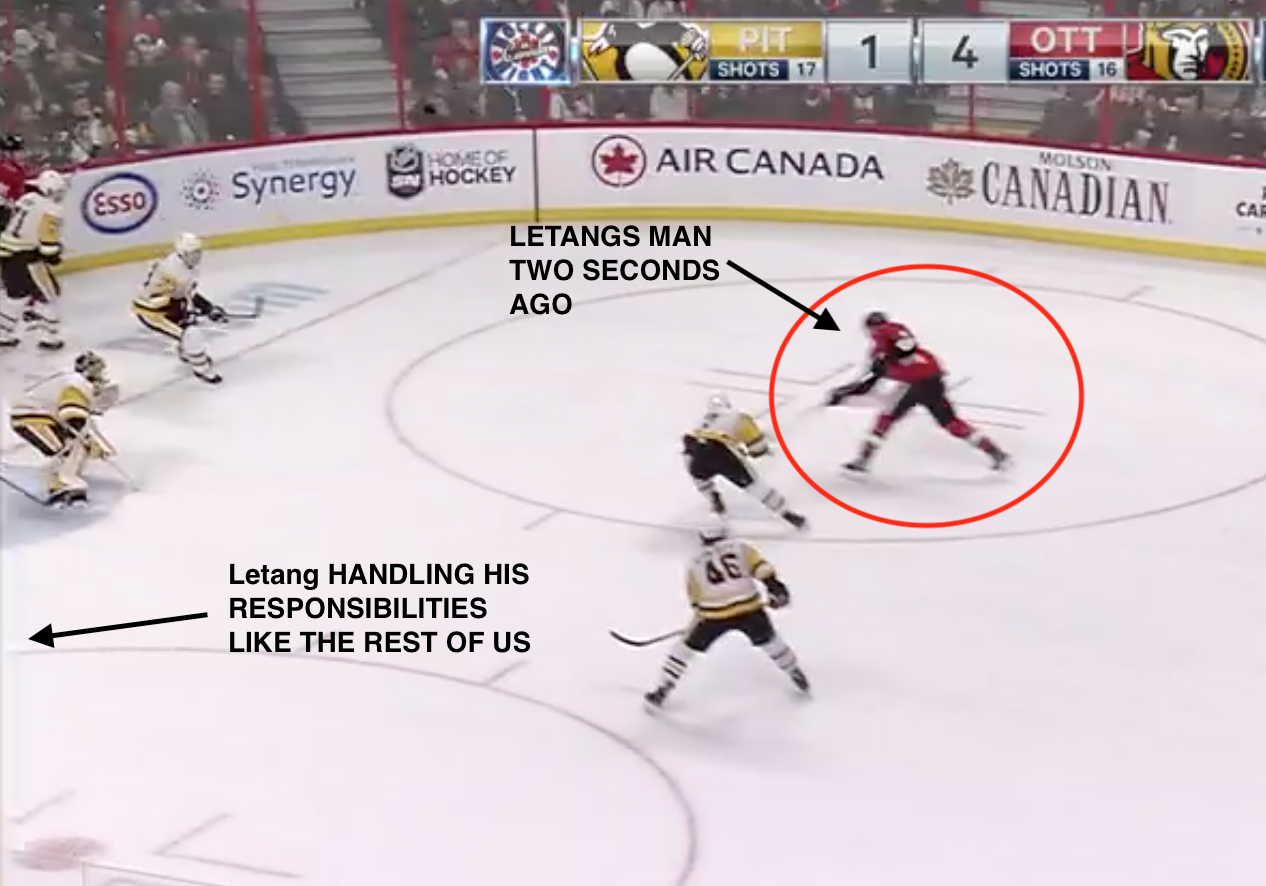 Miraculously DeSmith, or was it Murray, didn’t allow another goal in the remaining 3 minutes.

Murray gives up 3 on 10 in the first, DeSmith answers with 2 on 9 in the second. Like I’ve said all year, it doesn’t matter who is between the pipes if NHL players are getting wide open looks from within 15 feet.

With nothing to lose the Penguins started the period giving the fourth line a good chunk of minutes. Sprong nailed one off the pipe, ZAR followed it up with his first of the year

ZAR scores an unassisted goal, his first of the season. pic.twitter.com/JBLkSliOps

The first goal since game 8 without a top six player in the stat line, so there’s that. You know this has to feel good for ZAR following the broken jaw and starting the year in the AHL. His game is coming together nicely and now with a goal in the books, it will be nice to see the confidence unfold.

The Penguins kept pushing and the next thing you know Matt Cullen stopped taking penalties long enough to bury one and make things interesting,

With back-to-back goals in the 3rd period, Aston-Reese and Cullen have breathed some life back into the Penguins. Let's keep it going. pic.twitter.com/wyjLzMialV

Bryan Rust getting back to what he does put it on the net and get a rebound. Rust on the ice for both of these goals by the way as he continues to be valuable everywhere. Good for Cullen, still not sure why he hasn’t been scratched yet.

Following the goal the Penguins showed their first signs of life, there was even a first line sighting! Then they went back to the whole turn the puck over thing and Duchene walked in on DeSmith and put us all back into misery. Dumoulin with some trouble along the boards, but as the story has been this whole recap, from the initial turnover this doesn’t look threatening: 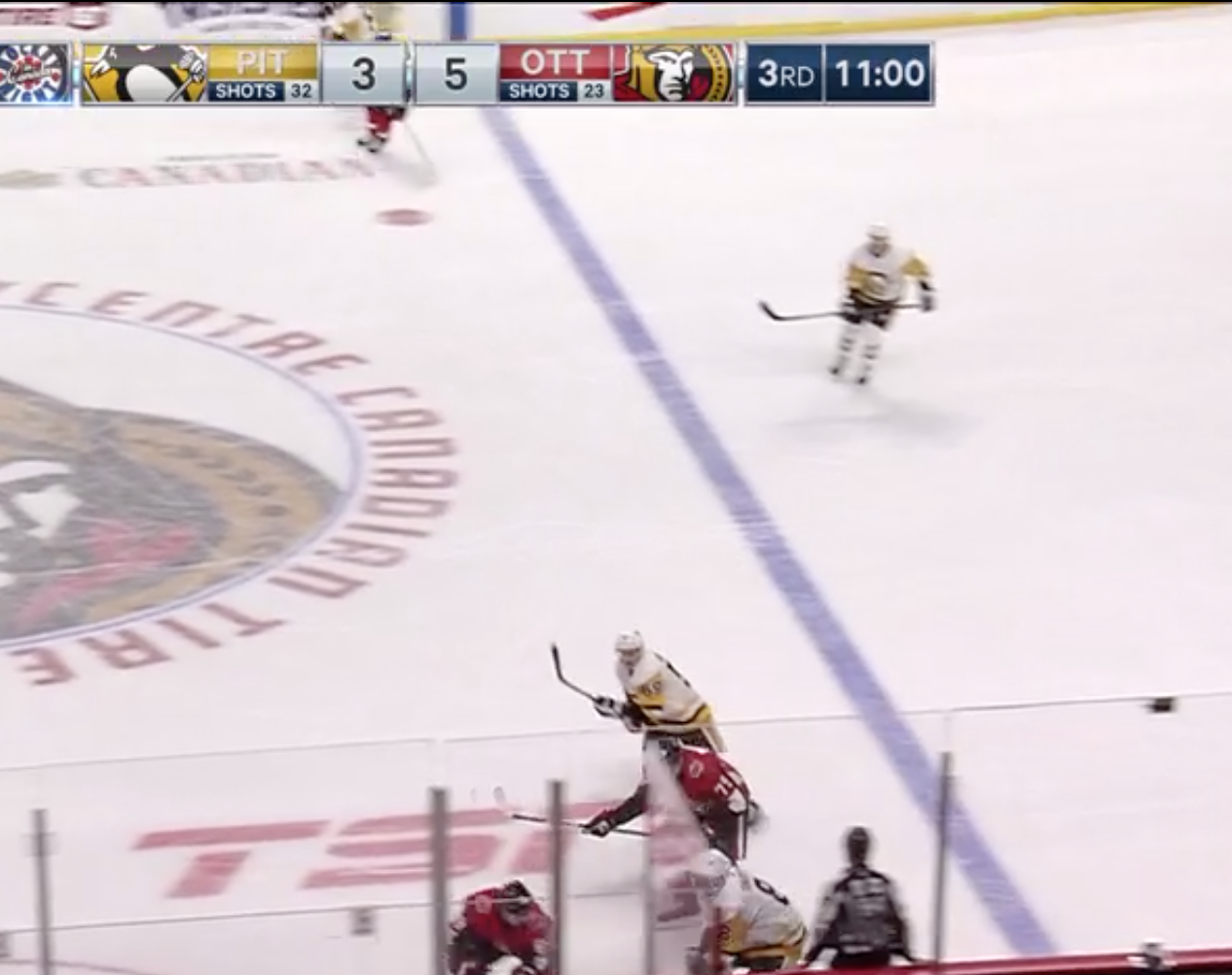 Watch the top of the screen, that is Brassard on Duchene. Much like the second goal the Senator kept moving and Brassard did not: 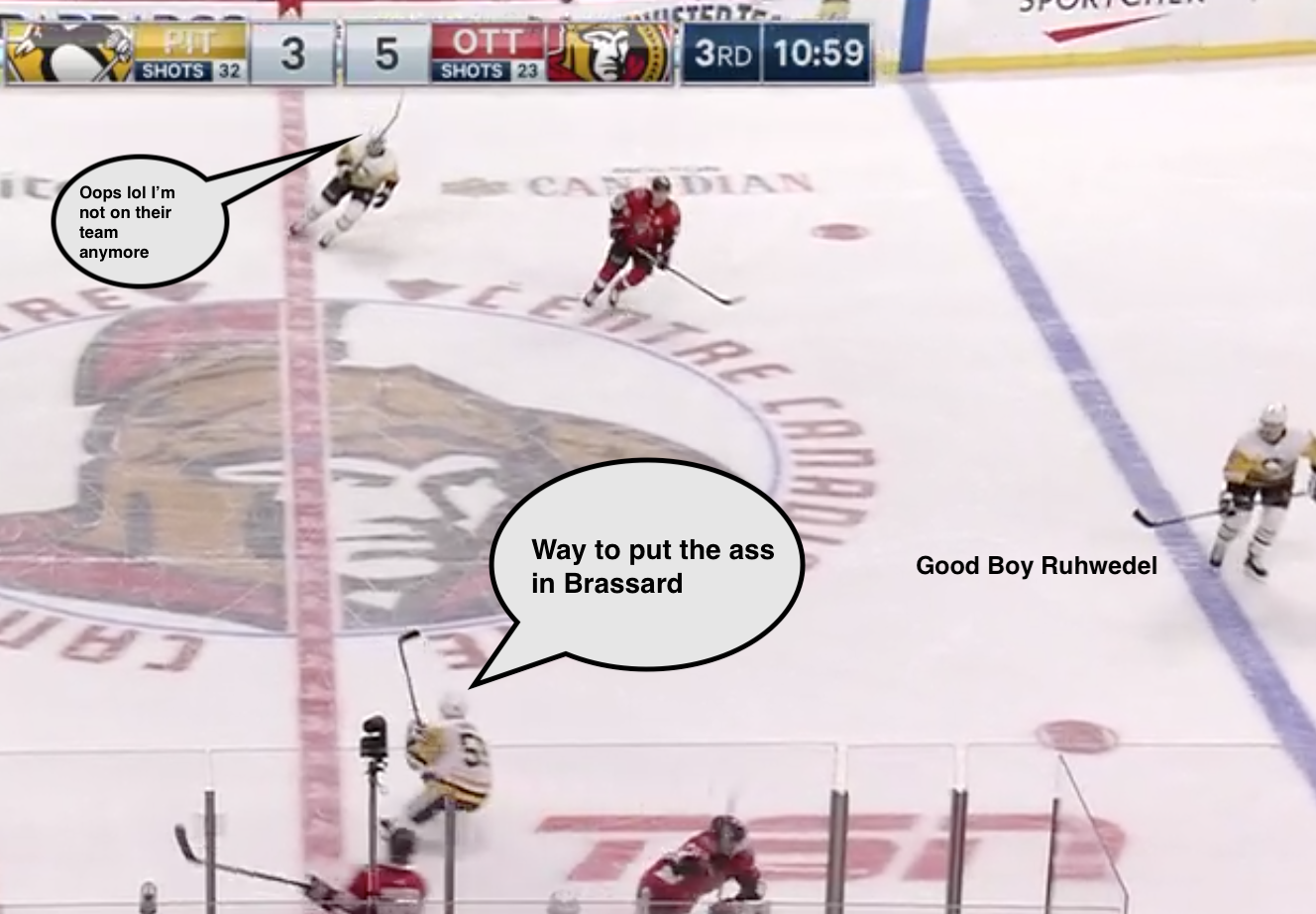 Six goals on six unopposed shots. The goal brought the fans back into the game and took the Penguins out of it although Crosby was probably more involved in this game than the rest of the team.

Sullivan with the fuck it moment pulled DeSmith with 4 minutes left. Surprisingly they didn’t give up a goal right away and actually got one of their own.

Great to see the old Bylsma give it all we got with two minutes left so people think we tried hard effort. The goal took the loss off of Murray’s stats too, huge bummer for DeSmith but honestly, neither goalie should be given an L for this. The Penguins continued with the extra attacker but had to take a timeout with 73 seconds left, not sure there is another phrase that takes confidence away from you as “Recchi has the dry erase board out during the timeout.”

Evgeni Malkin made the best save of the night

Now stick with me here, but imagine if a forward was in front of every shot the Senators took in this game??

Somehow they didn’t allow an empty net goal. They didn’t score another goal either, but hey, it’s the small things?

The Penguins need help. I tried my best to show what happened in this game. A trade isn’t going to do it. The team needs to spend hours watching the video of the forwards missing their assignments, the defenders missing their assignments, and they need to compare it to the cup teams when those mistakes didn’t happen. Mike Sullivans Penguins perfected the game of transition and that game is being shoved down their throats as they make the same mistakes they used to feast on. 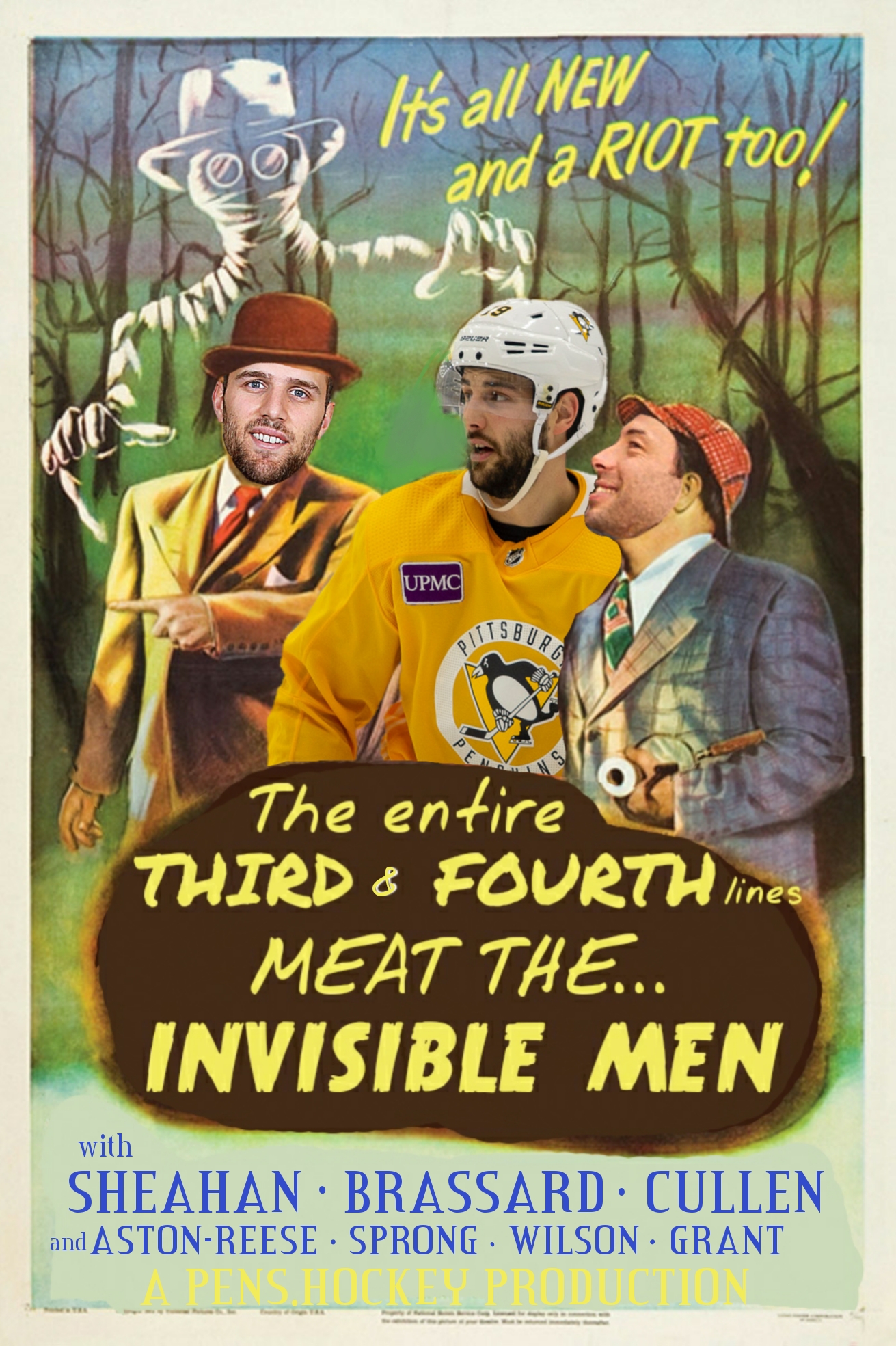