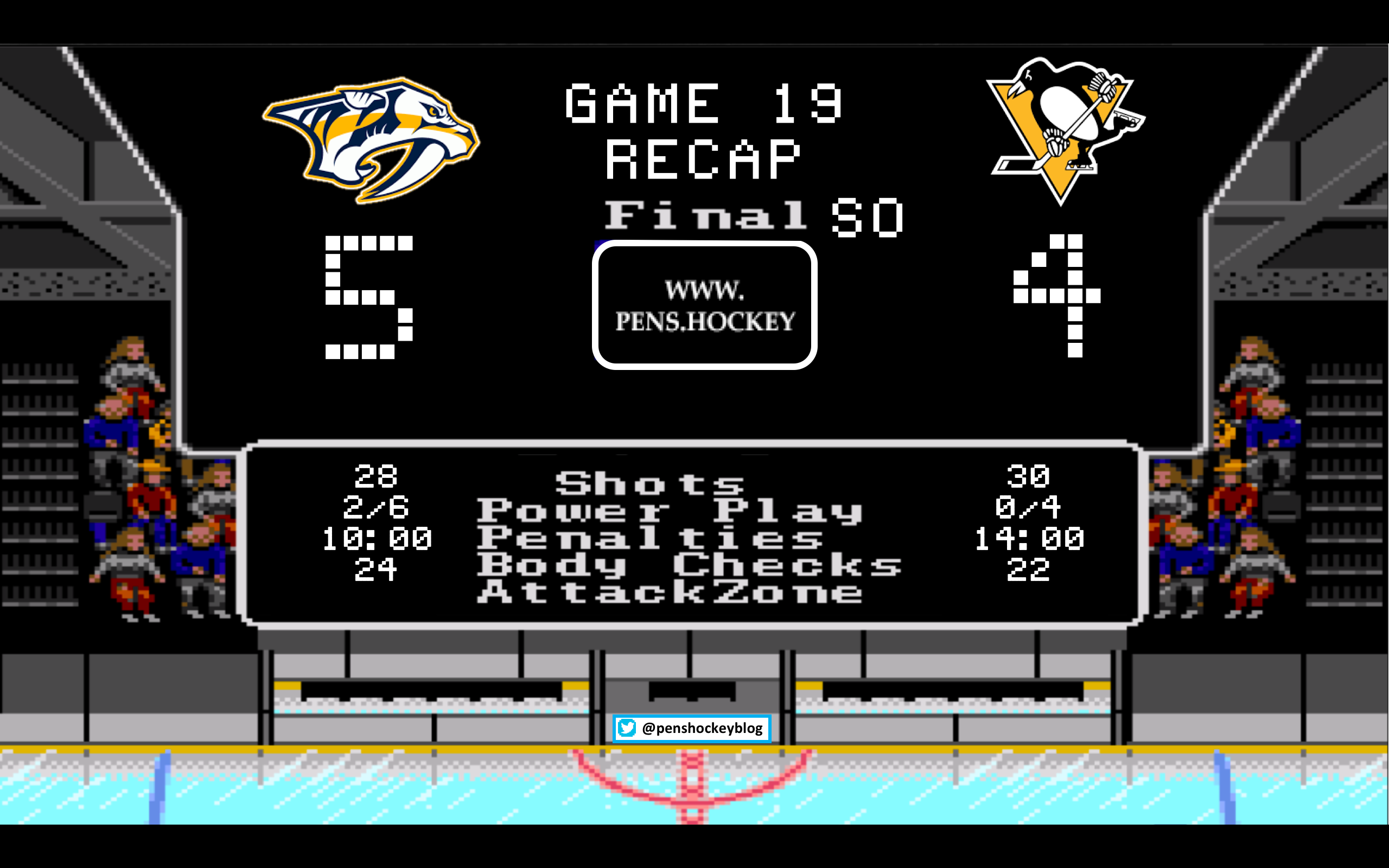 I know we are all getting tired of these back-to-backs, but imagine how the team feels. 5 weeks into the season and the team just completed their 19th game, which is almost 4 games per week, with 13 of the 19 being on the road… Bobby G with some good news on that front:

This is a big deal because the Penguins are approximately 72-4 under Sullivan at home.

Thanks for the dark-ages flashback Bob! Okay enough with that stats, let’s get to the ‘cap.

The Penguins once again got the start they wanted when they found themselves on the powerplay less than one minute into the game. Unfortunately they didn’t score.

10 minutes later Conor Sheary continued his rough patch by taking a “holding” penalty, but Nashville needed some Viagra because their PP was Rusty:

Rust did such a great job hiding the shot from Rinne until it was too late.

The rest of the period looked a lot like a carry-over from the Washington game except the Penguins actually had a lead. Nashville failed to tie the game as Tristan Jarry did what he had to do to keep his team ahead.

The Penguins Twitter team was back on their shit tonight, so I guess they replaced whichever employee jumped off the bridge last night:

Immediately off of the opening face off you could tell this wasn’t going to end well. Nashville started pressuring and the Penguins looked like they literally called up 12 people from Twitter to play for them. Two minutes in it was the new man in town, Tyle Kurris tying the game:

Maatta with Ruhwedel is not a pairing of choice. Patric Hornqvist gets knocked down and fails to get back to Turris in time for the puck, and Riley Sheahan chases the puck to the corner even the Chad Ruhwedel is also in pursuit. It’s a perfect example of everything that is wrong with the Penguins right now: failure to pick up in transition, failure of all 3 forwards to back check, failure of each man to know his role/position.

Not a left-handed catching goalie in the league saving that shot with skill, only luck can stop that blast, and even a right-hand catching goalie would probably miss that. Tough clean faceoff loss by Riley Sheahan.

Two minutes later Kris Letang openly assumes Kevin Fiala’s gender or something else offensive so he gets called for roughing. The Penguins penalty killers did a little bit better by killing off 13 seconds this time before Craig Smith made it 3-1, the goal once again happened following a clean short-handed faceoff loss. At this point the players, fans, and coaches were just praying to get out of the period without making a total joke of themselves.

They would’ve gotten away with it too, if it wasn’t for Evgeni Malkin and that stinkin’ Phil…

The Kessel goal stopped the bleeding, and the period would end 3-2 Nashville.

Third period trailing on the road in the second of a back-to-back, some said “kiss this game goodbye,” Jake Guentzel responded with “kiss this”

Jake was going back to the forehand away from the perfect Triple Deke. This was Guentzel’s 5th goal and I honestly can’t even remember the first 4. Bodies were literally dropping everywhere:

A tie game was something new, but it was short-lived as Jarnny JarnKrokashit took the lead back for Nashville.

Ian Cole lost his stick earlier and was planning on getting a new one from the bench before Guentzel was forced into a turnover. Jarnkrok smartly waits out Cole and gets a clear snipe on Jarry, another goal scored using the Penguins formula of pressure, turnover, attack.

Before the Penguins realized they were supposed to quit trying they got a boost from their best defender:
BRIAN DUMOULIN (1) Assisted by SHEARY (2) & KESSEL (15) @ 7:43

Talk about lack of defensive positioning… yikes. Dumoulin gets his 3rd career goal in his 182nd game.

The Penguins and Tristan Jarry were determined to get out of the shitstone arena with a point, and they held on just long enough to do that.

Overtime was insane and the penguins had multiple chances but just couldn’t help Tim McGraw write his next heartbreak.

This is a perfect summary. Nashville did get a few looks but Jarry was there to shut them down.

The Penguins went with Malkin, Crosby, Letang. The Predaturds went with Turris, Fiala, and Forsberg. Turris completely missed the net and Malkin put it right in Rinnes glove.

Fiala would slooooowwwwwwwllllllyyyyyyyyy move in and score on Jarry, and almost completely stopped moving forward which would’ve made the goal illegal.

Sidney Crosby answered with some moves:

Forsberg went right in and beat Jarry low and the game came down to Kris Letang.

Letang has a signature move in the shootout, it’s his deadly backhand top shelf. Letang didn’t use this move. Letang skated in, used his edges, and fired the puck off his forehand wide. Letang has no confidence right now. Questionable usage here and not using red hot Phil Kessel.

How weird is it that he sent this tweet out before the game, and those are the players that registered points?

Camon LeTang, good boi you can do this...ohnooooo