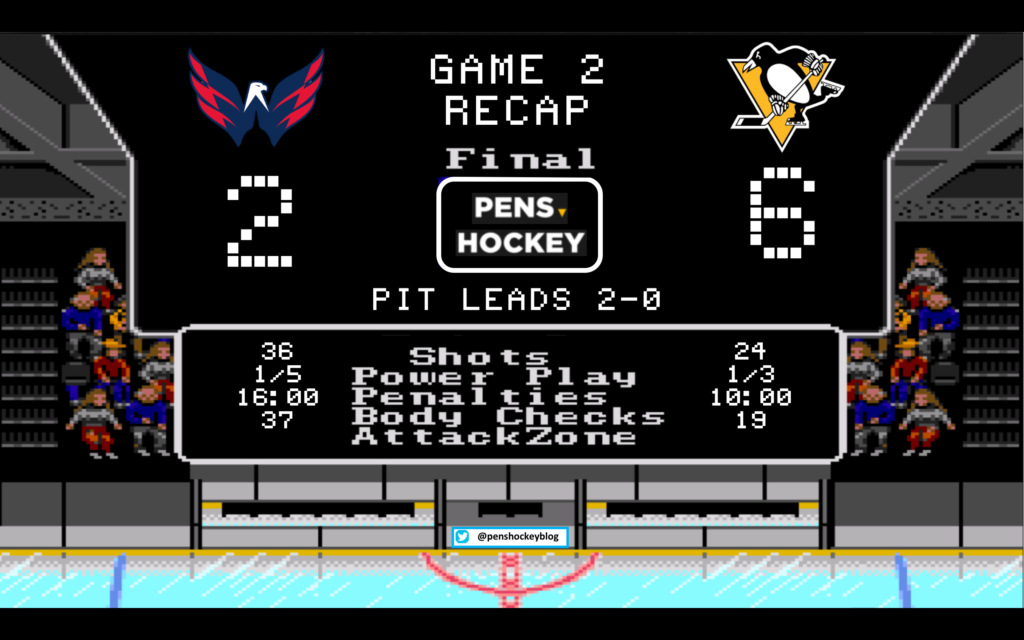 Starting to think the Washington score keeper is either inflating the Capitals hits or not counting the Pens. Last game it was 41-17 Caps and now this? Seems fishy but whatever, click the image for more stats.

If you’ve ever played sports you’ve heard the cliche time and time again as your 52 year-old coach yells it out while trying not to have the dip he doesn’t think anybody knows about fall out, “you have to know how to win.” For most people “how to win” in hockey is by doing your job, scorers score, goalies goalie, Shane Doan sucks. For the elite of the elite they truly understand what it takes. You can watch another 100 playoff hockey games and you will most likely not see an identical all-around performance equivalent to what Sidney Crosby put on display last night. If Alex Ovechkin wants to know what it takes to be a champion he should save the footage from Crosby’s shifts as his screensaver. I will continue stroking my Crosboner throughout this post so now I have to ask a serious question… who in the fuck in their right minds didn’t vote for Evgeni Malkin to be in the top 100? People that ignorant should be taken out of board positions for this sport. His game last night alone should make the damn list. Oh, and the draft lottery was last night, it was boring as hell and it came down to the New Jersey Devils and Flyers for the number one overall pick, leave it to Philadelphia to find a way to lose something in April. The top 8 prospects from central scouting are all forwards so who knows what Shero will do with his first overall pick, but the first defender on the list should be getting excited.

Everyone was excited about this game and we all knew the Capitals were going to bring it. The marvelous flow of Carl Hagelin flew across our screens once more and something just felt right. After crying that Crosby cries and gets all the penalties we all knew Washington would get their chances in this game. The Capitals PP would be uneventful as they found out that just because you have an erection doesn’t mean you get free sex. One of the biggest moments in my opinion came on the second powerplay opportunity when the Capitals were cycling well, they eventually got the puck over to Ovechkin in his normal position and he let loose his typical blast… and it hit Fleury in the chest. Fleury (from scouting and playing them for years) saw the play unfold and was waiting for Ovechkin to shoot it. It didn’t hit his chest because it was a bad shot, but to me seeing the calmness of the Pens PK predict the movement from the Caps was a huge moment. The worse moment came when Patric Hornqvist blocked a shot with his high ankle where there is about as much protection as a condom with the tip cut off. Hornqvist wouldn’t return. Gain a Swede, lose a Swede. Try as they might the Capitals couldn’t beat Fleury and the Pens were able to weather the period. Every first period tied with or leading the Capitals is another chip of doubt.

The refs continued their pity party for Washingtons game 1 loss and the Capitals got a powerplay to start the second as the Penguins were called for winning. Halfway into the kill the defender of all defenders Kevin Shattenkirk got beat in a foot race by Matt Cullen… “the Pens need a speedy defender, WE NEED SHATTENKIRK,” The real Pittsburgh Dad shat on the kirk and buried his first of the playoffs.

Give your Dad a hug today. pic.twitter.com/RBC7xcOtco

The mighty Capitals wouldn’t let this total lack of defensive effort bother them, presumably because they are used to a total lack of defensive effort, and they would even get a goal of their own a minute later on the powerplay as Matt Niskanen snuck down low. Capitals Twitter doesn’t do gifs and I’m not posting video highlights for them. 6 seconds after the goal Evgeni Malkin gets called for slashing and the arena is rocking the red. The Penguins went to work cockblocking the Red and killed it off. Then the Sidney Crosby show really took over.

Get in the fast lane Grandma, the bingo game is ready to roll! pic.twitter.com/xWhnKrkbbN

Jake Guentzel is such a smart hockey player. It doesn’t matter if there are 3 defenders near him, if Crosby is skating full speed just give him the puck. Sid casually receives the tough pass easier than a hooker gets herpes, and Phil Kessel decided to show Toronto how much he sucks.

With Hornqvist not returning Sullivan was mixing the lines, throwing Kessel with Sid and Guentzel worked wonders here. A few minutes later the Penguins were on a 2 on 1 and though the puck went wide Brayden Holtby stood up to push the oncoming Penguin out of the way instead of track the puck. It was at that moment that everyone knew the Penguins have permanently bought property, and it would take one more goal to break him. Sidney Crosby show, scene 2. After a turnover the Caps rush down with numbers, circle jerk with the puck and rip a shot from the point, only to be blocked by a diving Crosby who was the second to last forward in the offensive zone for the turnover. As if the block wasn’t enough he makes a touch pass to spring Guentzel on a 2 on 1. Niskanen laid out to block a pass but young Jakes eyes were focused on the biggest gaping opening he’s ever seen that wasn’t on pornhub.

Horrible positioning by Holtby who broke the trust fall of Niskanen. The Capitals would come back with a rush of their own in the final moments of the period but a sure-thing backdoor play looked to go wide by bad luck. Turns out it was an elite defensive play by none other than Sidney Crosby to cap off a period that showcased just how damn good he is at this sport. I can’t find a gif of the play, but everyone watching it looked like this.

The period would end to a few boos from the Washington faithful and a 3-1 Penguins lead.

At some moment in time before the 3rd period started this happened..
https://youtu.be/IYK3RcbfJYA

Barry Trotz decided to play some mind games or something and benched Holtby to start the third, I assume it was to send a message to the team or something but still, takes huge balls to do that at home down by 2, huge balls orrrrr desperation. Playoff hockey is a place where the tried and true one liners are truly made, one of which is with a 2 goal lead the next goal is huge. Washington had to score next but unfortunately for them the Penguins get all of the calls and got an early powerplay chance. They actually received this powerplay after the best delay of game penalty I have ever seen from Shattenkirk, the dude should get a reward for this: regular pressure by NHL standards and he throws the puck from the corner over the glass before it even gets to the next blueline, elite stuff by the defender that was supposed to get the Caps over the edge.  After some good puck movement it was The Thrill giving the Pens a commanding lead.

Kessel goes five-hole for his second tally of the game. #ImPhilKesselMama pic.twitter.com/54unEIx1uY

Holtby would’ve saved that. We got 99 problems but goalie drama ain’t one. Coming in to this series who would’ve thought all the goalie drama would be around the Capitals. Gotta love it. Washington was determined for the first time since the first period, and after Fleury made a great kick save on Ovechkin his rebound came out to Backstrom who buried it to make it a 2 goal game again. The goal all started after Bryan Rust put a puck off the post to spring the Caps on the odd man break. The following 2 minutes felt like an eternity as the Capitals poured everything they have at the Pens and many of us had violent previous postseason flashbacks on each shot attempt. The Pens weathered the storm and then Evgeni Malkin put the dagger in.

In an attempt to keep Washington alive the ref immediately called the goal off for goalie interference, but on further review sucking isn’t listed as a possible offense in goalie interference. Geno on the bench the whole time like:

Coach Sullivan has challenged the play. And now we wait to see if Geno scored… pic.twitter.com/FY2psBiN6n

The Penguins were back to a 3 goal lead and did the best thing they could’ve done, they went to what I called during the preseason their 3/4th shell. They don’t completely collapse and allow extended pressure, they just play defensively first but still apply offense, it works beautifully. Yeah the Caps hit some posts but they are only exaggerated because they were losing. If Rust buries his post shot the game isn’t even this close. The Capitals couldn’t get that all important 3rd, 4th, 5th and 6th goal even with another powerplay opportunity in the final 3 minutes and it was the kid from the farm with the empty netter.