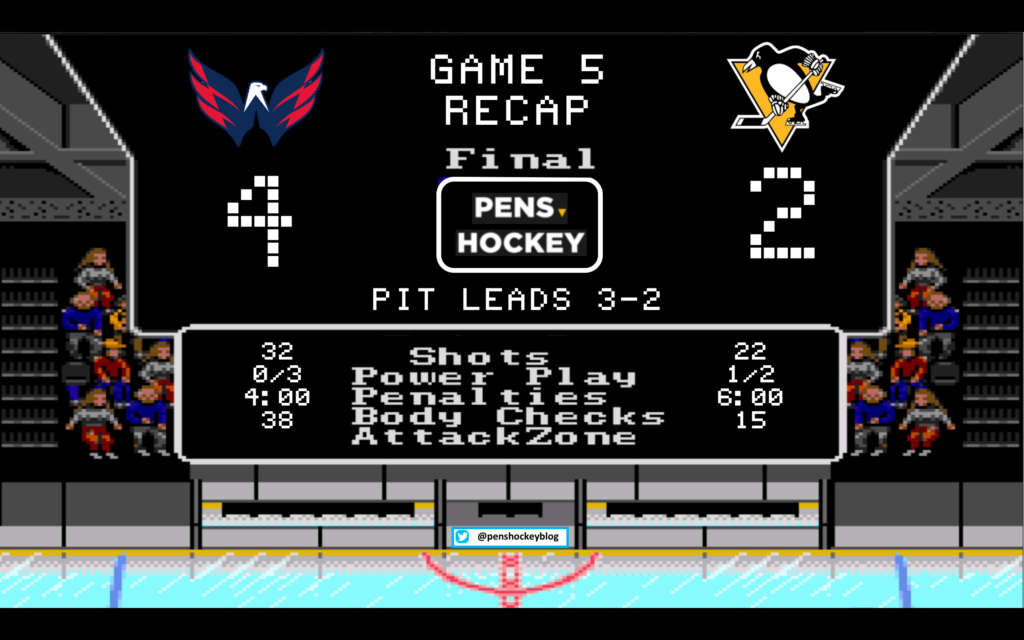 Congratulations. A team that absolutely had to bring their best brought their best and won a game they had to win. Anyone that gets any more emotional than that either just became a fan or has a short memory. The idea of beating the Capitals in 5 games was fun, but it was also a bit of a stretch. Even when the Capitals choke they are good for 2 wins. Two things to remember as this series shifts back to Pittsburgh, the Penguins are yet to play their best game in this series and the Penguins play really good hockey following a loss. The hardest win in a series is the 4th one, and that is especially true when it is the first chance at getting the 4th win.

Early on we saw that Trotz was serious about the whole Ovechkin on the third line thing. We also realized that that line is going to hit everything that moves. The refs were actually smart for once and called Wilson early to set the “we aren’t letting this get too out of hand” tone early. An interesting side note is that the move of Ovechkin seemed to get the best of Sullivan, as his bread and butter has been matching the 14-7-34 line against the top line. He had to choose if he should do this still or move them to match against Ovechkin, he chose to stick with the 4-1 match-up leaving a new group to match-up against Ovechkin. Look for some adjustments to come there.

Great look by Hainsey who most likely thought “holy shit I have no reason to be down here what do I do oh look a Swede!” Good to see Hagelin get on the board, hopefully he can use it to build on.

The refs seemed to be pretty ticky-tacky in the first as both teams got a power-play or two, and after the most recent one failed for Washington they once again sneak away with a hold. Now last time I called this out some of you said it’s impossible to see that at full speed, which is a good thought except the refs can see when a 102 mph shot hits the crossbar or the back bar, they can see if a skate is offsides by an inch even though there are 4 players crossing the line at the same time, it shouldn’t be a stretch to expect them to see a player carry a puck since it’s not allowed:

This is the play pic.twitter.com/FZw3e0qgxW

Thankfully the draping of Kuhnhackl wasn’t called, Sidney Crosby was irate on the bench about it being the second time in 3 games, and the Capitals would go on to score off a nifty toe drag by Andre Burakovsky with 30 seconds left in the frame.

Start of the second period with a tied game isn’t a bad thing when on the road, I think the Penguins success in this series has made many of us forget that they have already won twice on the road in the series, something you aren’t supposed to do in the playoffs. The Penguins get their final power-play opportunity of the game 3 minutes into the period, and if you’re at work you should probably just go to

because there isn’t a difference between that and this:

Crosby to Malkin to Kessel.

Great movement on the powerplay as Kessel lights Holtby up at 4:20 of the second, nice. It doesn’t matter who the goalie is or who the defenders are, this play was only going to be blocked by luck. With the assists Crosby ties Lemieux at 96 playoff assists and Malkin (it’s fucking MALL-KIN Pierre, not mal, you’re the only piece of shit that says MAL-KIN, even though Evgeni himself says MALL-KIN, he should know, so start saying it right dick breath) is not far behind with 94. The Penguins would manage to hold on to the lead and put the Capitals 20 minutes away from elimination.

Off the opening faceoff Sidney Crosby has an opportunity to drop the dagger but couldn’t convert. The Capitals have needed Holtby to steal them a game all series, I don’t know if he stole this one or if he just played better than Fleury. To his credit, Holtby made all the saves he needed to in the third period. Following that save and a comment by Pierre saying Backstrom is hurt or something because he isn’t playing well Backstrom goes down and finds a hole between Fleurys pad and glove. Definitely a shot Fleury is going to want back, but the dude has stood on his head for this team the whole series so being pissed at him for this one is a little irrational. Since the Capitals don’t show gifs you don’t get to see it.

That’s knitting lady to you, Jared.

A few shifts after the tying goal Tom Kuhnhackl had a golden opportunity but Holtby stood tall. It was around this time that both teams were getting away with some extra shenanigans and obvious the refs had put the whistles away for the third. I don’t really mind this as long as there isn’t anything blatantly illegal ignored. After some back and forth hockey the Capitals finally got the break they needed, as a shot from the point was blocked by a Penguin but the puck made its way perfectly to Evgeny Suxhisbestfriendsnutsoff who buried a tough angled shot before Fleury could recover. Someone blamed Fleury for this goal. The tying goal, sure go ahead. This one? You should probably turn your tv off until Steelers season starts.

The Penguins barely had time to regroup before Ovechkin came steaming down the ice. He puts a shot on goal that is perfectly blocked by Hainsey but just like 20 seconds before the puck came to a Capital and the Penguins couldn’t adjust plus Ovechkin with pretty perfect placement for a third liner.

It was a must win game for the Capitals and they got goals from Backstrom, Thatnutzguy, and Ovechkin and good enough goaltending by Holtby. Here’s the thing though, they have to all play that good and then some for 2 more straight games, and that is going to be a challenge. The Penguins would pull their goalie and attempt more late game heroics like they did in game 3, but Crosby was on the ice so that’s apparently why it didn’t happen:

Is Pittsburgh a better team w out Sidney Crosby? Think u have to say definiteley, yes at this point

People are posting anything for clicks. Holtby wouldn’t have his 19th nervous breakdown in this one and the Capitals were able to hold on to make it a 3-2 series. For those of you that said the series was over on Twitter last night you should know that 3>2 and 3 is closer to 4 than 2 is. How the fuck do some of you live with so much pessimism when this exact scenario (lose by 2 in game 5 in Washington) happened last year.

@MikeDarnay Have to ask yourself “why couldn’t the Pens beat a team that only lost 7 games at home all season 3 straight games at home?”