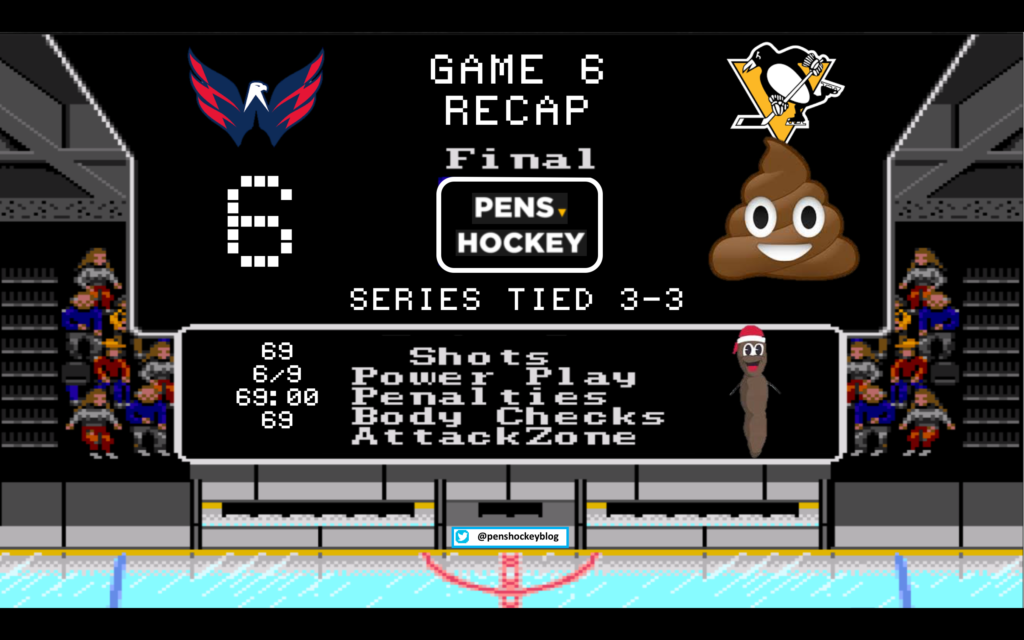 I could put as much effort into this post as the Penguins put into game 6 but then this would be the only sentence.

There are a bunch of ways to look at this game, there are a ton of things you can attempt to take away from it, but in reality there is only one thing to do; hope that the team that gave a Bylsma-like effort tonight is nowhere to be found on Wednesday. Simple as that. The Capitals have cashed in on opportunities and have finally gotten the goaltending they need (though it isn’t too heroic when you only face 3 shots) and now this series will be decided in 60 minutes. There is a lot of debate about momentum and if it carries from game to game, for the Penguins sake they better hope not. A season of title-defense is never easy when everyone is coming for the king, a king without his full protection is even more vulnerable, and now it is the final battle.

The first half of the period looked a lot like the end of game 5. One team wanted to shoot and one team wanted to play pocket hockey. 11 minutes in the Capitals get a powerplay and Yoshi scores. The Penguins were able to escape the rest of the period, but the team hasn’t looked the same since Kessel scored in game 5. Truthfully, they haven’t looked the same since winning game 4, almost like that “win it for Crosby” gutsy effort completely drained the tank.

Conor Sheary had the biggest hit and Olli Maatta was the teams best offensive player. That sums up this period. Conor Sheary also forgot how to clear a puck but it luckily bounced over to veteran Ron Hainsey, who then demonstrated for Sheary how to really not clear a puck. This period literally looked like any period played by a Bylsma coached Penguins team that needed one more win to finish a series.

Down 2-0, the Paint Can has a few murmurs, 15 seconds in the Capitals score. Matt Cullen gets called for a retaliation slash after being interfered with and the Capitals take advantage of poor officiating for once and cash in again. Some people wanted Sullivan to pull Fleury at this point but there are two problems with that: 1, Sullivan wasn’t coaching this game and 2, the team wasn’t going to magically start responding, they didn’t have it and you could tell. It somehow got to 5-0 and then the Penguins scored twice. The 12 fans that stayed started mocking Holtby with the familiar “Holtby” chant, but as it echoed across the empty Paint Can seats it seemed more of a mocking of the team that now has to win one on the road to stay alive.

There is one thing left to do for both the fans and the players, especially the players: