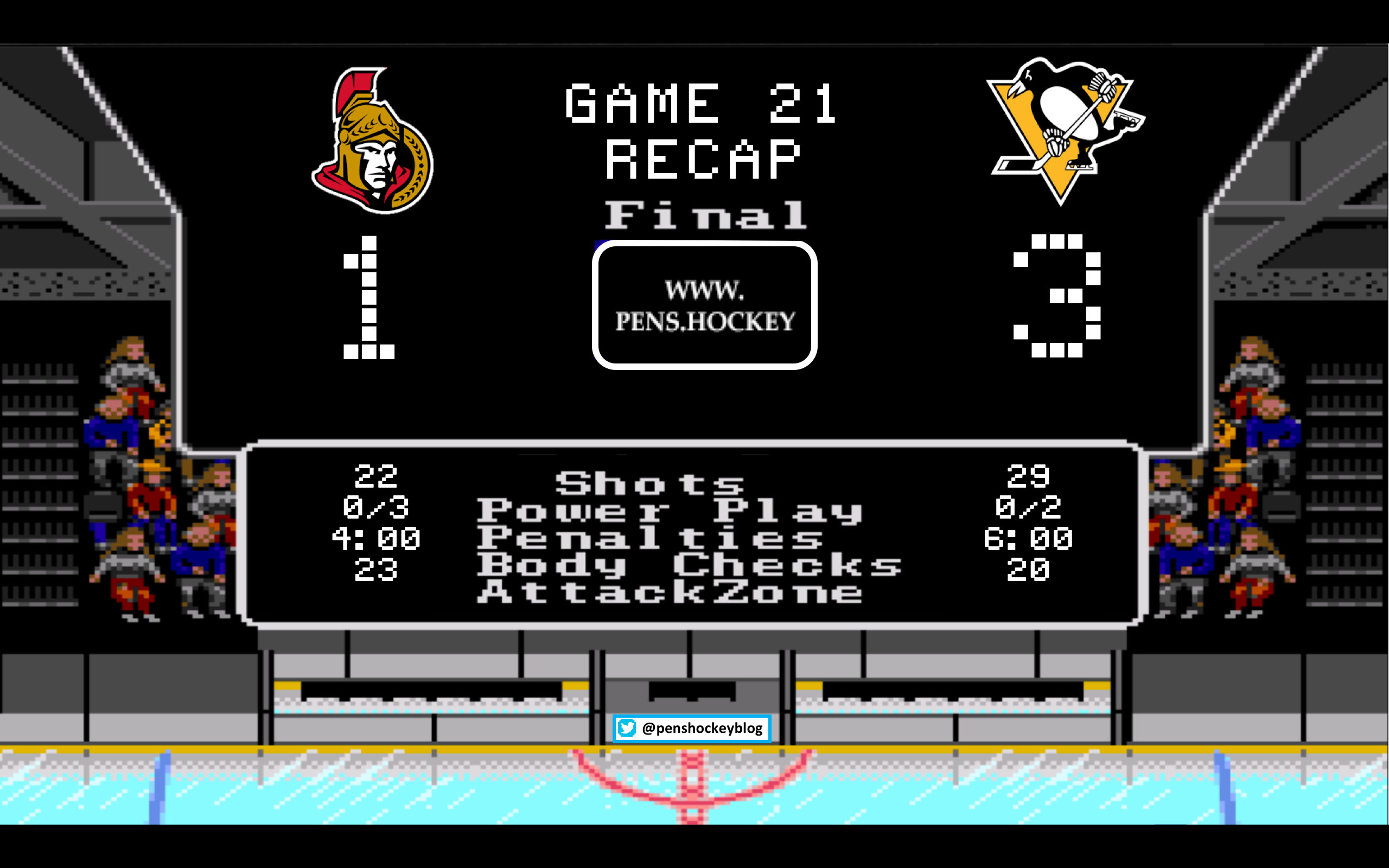 There’s nothing quite like a rematch of a heroic playoff series to really test where you are as a team in the season. It was also the 21st game of the season, which we predicted over the last few games would be the time the Penguins start to play Penguins hockey instead of their pickup hockey style they started the season with.

Why does he think to look that up? I don’t know but damn if I don’t appreciate it.

Rust has drawn a team-high 10 penalties this season, including 2 Tuesday. He drew 16 last season.

Rust has factored in multiple ways this season that might not be noticed by the general public. Glad Grover pointed this out, Rust is also 6th on the team in points despite only scoring 2 goals.

Had no clue Recchi wore 18 once, mind blown.

Anytime you go into the barn of a team whose heart you broke your goal in the first period is to not give up that first goal. It can be the difference between winning and losing due to how much the team wants to win for their fans to get some sign of revenge. The Penguins played a much tighter checking game in the first, in fact it almost looked like Sullivan was fighting dull with dull and playing his own style of trap.

That’s enough jibberish about a scoreless period though, because there is only one reason this period was scoreless:

How many times do we hear that he has made an incredible save? This one is the best because it showcases something most of his critics say he lacks, and that is athleticism:

Matt Murray with an unbelievable save pic.twitter.com/FDDtmYYguO

The strength to push off of his ass (notice his leg isn’t on the post for leverage so he is literally only using abdominal strength and arms to move his entire body over) is one thing, the hockey IQ to drop the stick and nearly catch the puck with the blocker hand is just something else.

Murray ended up making this save pic.twitter.com/vxyryMFaNn

Matt Hoffman isn’t some schlub from the ECHL either, he has Ottawa’s best wrist shot. Unreal stuff by Murray, go to our store and buy everyone on your Christmas list a Murray Saves shirt, this isn’t a shameless plug because you should feel shame for not supporting your God.

Just like they teach you in goalie school, right? Complete improvisation and brilliance.

Here's a look at your #PITvsOTT stats after 20 minutes of play. pic.twitter.com/NsOAQI6gkx

We knew coming in that Ottawa would slow down the Pens game and I hinted in the gameday that I thought that that might be a really good thing for the Penguins. By making the Penguins think about their possessions they started surgically going through the neutral zone and then set up shop offensively, almost like they didn’t want to willy nilly throw the puck away after working so hard to get there. The third line specifically looked really good cycling the puck, and 36 minutes into the game they broke the tie.

From the gameday: “Riley Sheahan takes care of business in the corners, Patric Hornqvist does his job in front of the net, and it leaves Conor Sheary alone to do what he does. “ 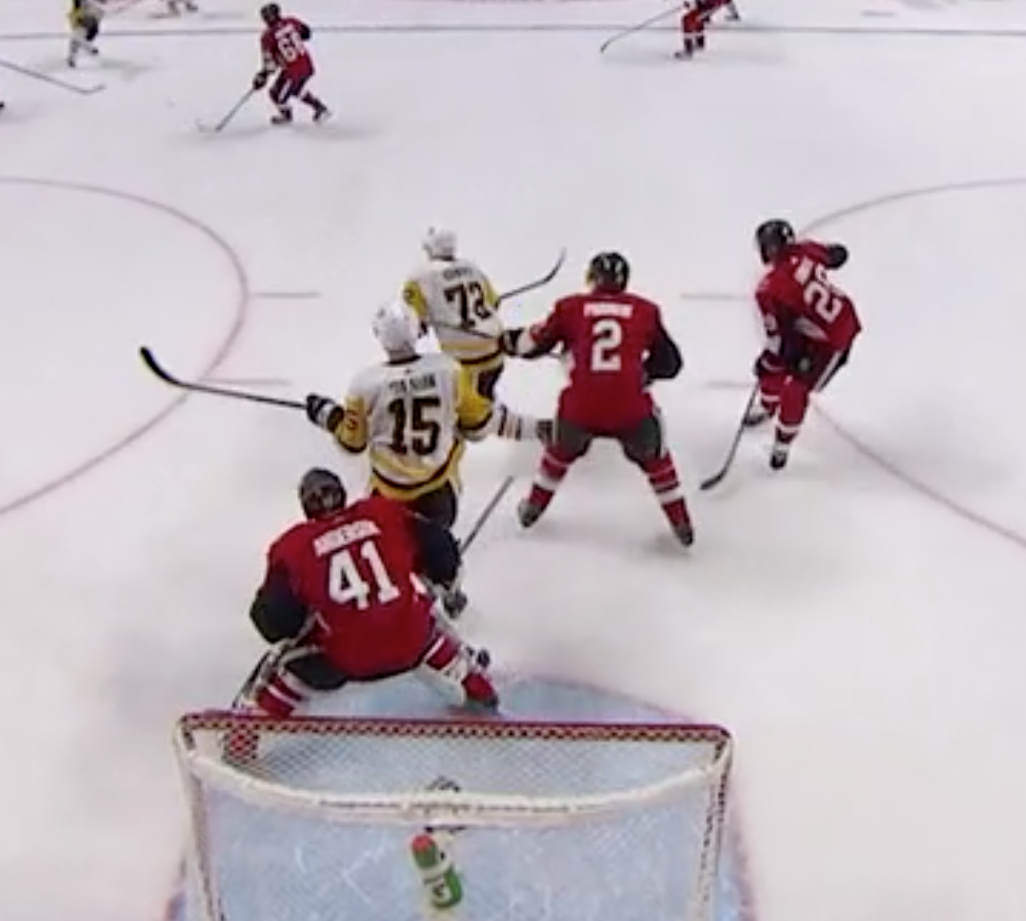 Patric Hornqvist does his job in front of the net

It looked as if a 1-0 lead was going to be what the Penguins would go into the room with, but after some more cycling the puck came to Brian Dumoulin and maybe the Penguins remembered that good things come when you throw pucks to the net!

Winning back-to-back championships…
Playing tons of back-to-backs games…
And now Guentzel is scoring with his back.

I absolutely love seeing Brian Dumoulin pulling the trigger more, he has a very accurate shot and him shooting more can only be good for the Pens. Not enough Penguins defenders attempt one-timers from the point.

The third period was all about stopping the Senators drive, and too my pleasant surprise the Penguins did this through defense. The forwards actually played defense. The defenders actually played defense. Kris Letang was noticeably better in this game, he looked a lot like Kris Letang. The Senators would get on the board at the 10 minute mark to ruin Murray’s shutout bid, but the team would hold the fort the rest of the way. Then with the goalie pulled Sidney Crosby had a chance to finish the game but once again showed the type of player he is by passing the puck to someone else who reaaaaallllllyyyyyy needed a goal:

It’s an empty netter, but it also lifted a huge psychological monkey off of his back and capped off a great game by the third line.

The thing that's great for Sheahan there is not only the goal but that Sullivan had him out there protecting a 1-goal lead on final minute.

We're not saying Phil Bourque is a wizard, but…

The Ol' 29er predicted Riley Sheahan would score his first goal as a member of @Penguins tonight. Lo and behold, it was just as Bourquey had foreseen: https://t.co/1lDvL5860k pic.twitter.com/GtHh3Slw6K

For those of you traveling to Pittsburgh for Saturday’s blog meetup game have safe travels, I can’t wait to meet most of you, and don’t do anything too stupid while simultaneously yelling “wwwwwwwwww.pens.hockey made me do it!!!!”