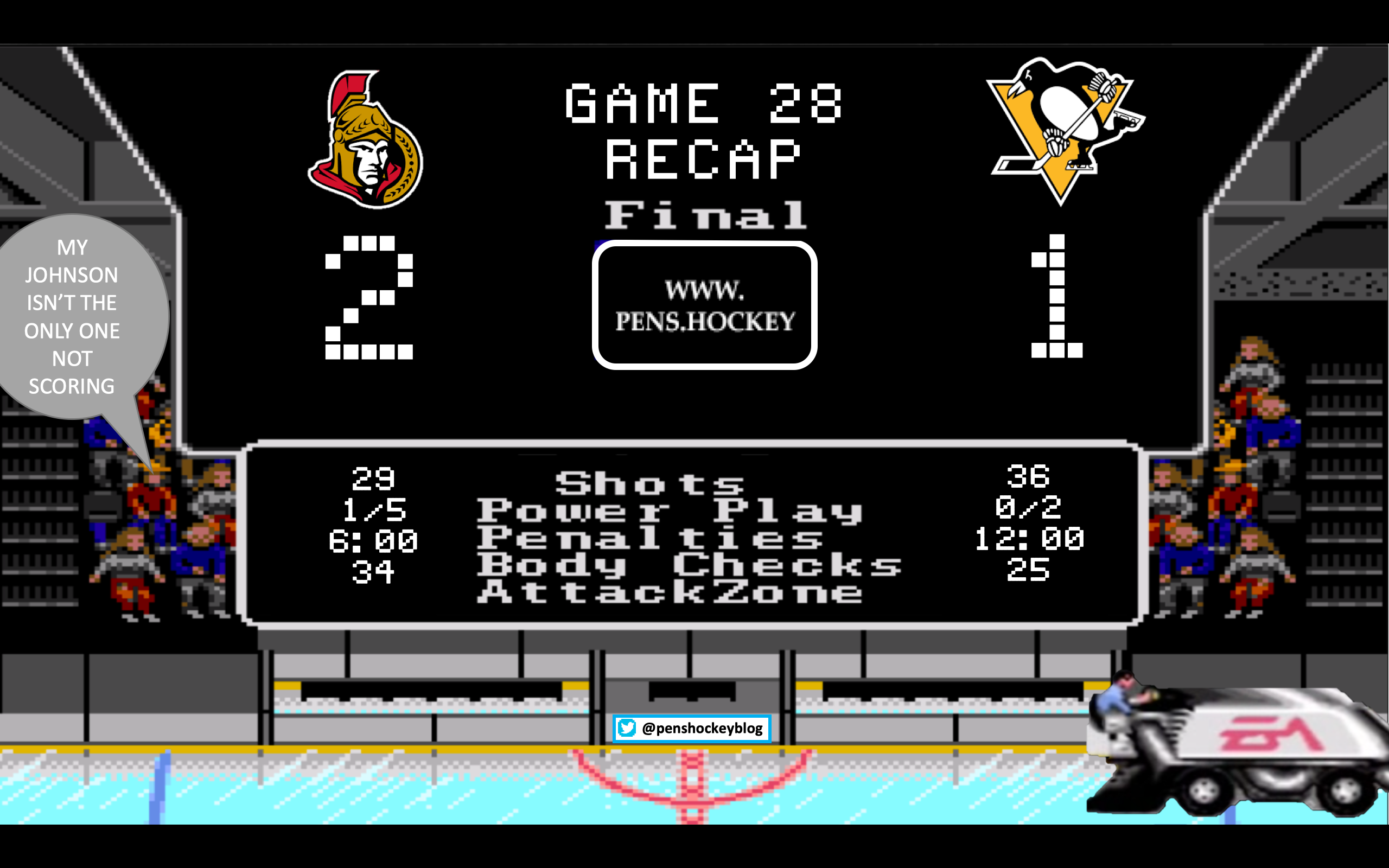 Things were looking up in Penguin Land. The payback defeat of the Colorado Lotsa Snow Falling Rapidly’s was followed by the dismantling of the New York Obo’s (brought to you by the Gorton’s Fisherman), and you could almost see that the Pens players testes had grown 3 sizes in those 2 games. The swagger was back, even without Hornqvist and Murray and Dad and See Moan.

I blame myself. At the end of the last Recap, I said ‘winning streaks are fun’. Then I also didn’t wear my Penguins socks. This one is on me, so as punishment I’m going to get sloppy drunk and watch the entire game again, crying and eating Cheetos. In my skivvies. So really just your average Saturday night at the Ungaba household.

Anyway, there was a game so let’s Get To It.

Sully decided that it was finally Dea Day, and it wasn’t even against Greiss and Kuhnhackl.

The Pens came out firing on all cylinders. Sid + Phil = OMFG. Those two were magic, and Guentzel was a perfect compliment. Sid and Phil had some puck exchanges that made me a believer in ESP. They did things that nobody would have expected – dropping deep into the corner and flipping it back and forth between them 3 times in one instance, all the while looking like neither of them expected it. That’s because they DIDN’T expect it… they just FELT it. Sid sees the game in a different dimension than most other people, as we’ve seen again and again and again… but Phil isn’t far behind. Those two were like long lost brothers out there, playing like nobody else was on the ice at times. It was a joy to watch.

Unfortunately, they couldn’t play all 60 minutes. Because when other people were on the ice, we were forcibly reminded that most people aren’t Sid and Phil. And then, about 5 minutes in, when Sid and Phil were getting some time on the bench to talk about hotdogs, Chabolabbadingdong released DeStarter’s kryptonite (as discussed in the Game Day that you SURELY read and absorbed completely, right???), a shot from basically the blueline. Did it hit something on the way in? Was it Chabot’s goal or someone in front? Did it hit a Penguin player?

I’d post the GIF, but it honestly doesn’t matter. It hit something and moved a bit, but DeStarter will want this one back. Shots from 60 feet just shouldn’t go in, full stop. Yet in it went. Didn’t even have any lube.

A few minutes later, LaZhua tripped up LeHair, a tragic 58 on 58 affair, and fans were forced to make a terrible choice. Do you expect the 2nd best road Power Play to show up (35.3%), or do you expect to let up a league ‘leading’ 9th short handed goal, 4th in a 4 games, 5th in 6 games?  As the math indicates, the choice was clear, and you have to wonder if Sully asked if they could just refuse the penalty.

Instead, the Pens did indeed conduct a power play, albeit with the 2nd unit, as Sid’s line drew the penalty. When ZAR is taking the FO in the first PP of the game, you really don’t expect much aside from Don’t Let Up A Shorty.

Soon after, though, the first unit hit the ice… and oh, it was magic. I mean… not really. Because they didn’t score. But wow they can pass. It was pretty. I mean, if you got points for pretty passing plays, wow, the Pens would have had some POINTS, I tell you!

After that SUPER exciting tease, not much happened and I remembered just how much I loved watching Ottawa ‘play hockey’.

Stats from the 1st period of play ⬇️ pic.twitter.com/1Vc0A6nMbz

About 15 seconds into the 2nd Period, Bad Letang decided he’d had enough. He’d gone entirely too long without Playing Hero and pinching to Make Shit Happen. And he definitely made things happen, but luckily for the Pens, the Sens were offsides by roughly Ungaba inches.

Most angles seemed pretty damn inconclusive, so we fully expected the goal to count, but PARALLAX BABY!!! No goal, no penalty, no soup for you.

Play continued with the Pens continuing to own the territorial advantage by finding multiple ways to break through the Senators trap. The 4th line sits more than most, so apparently they were taking notes:

Dea? We say A+. pic.twitter.com/xz3Te8VqIe

Speaking of taking notes, Dea apparently watches some guy named Crosby because not only did he protect the puck well, he roofed it through a fairly small 2 hole. Definitely smaller than my mom’s at least. Wait, I mean YOUR mom’s. Shut up.

The play started with Garrett Wilson driving and getting it to the net-ish area, with Dea providing the center drive. Even though the puck missed high and wide, Dea stayed in hot pursuit. When Grant was there to get in the way of the zone exit, Tkachuk couldn’t keep his shit together and the puck squirted over to a still-in-hot-pursuit Dea, and you see the result. Pens were tenacious and opportunistic and they did it without Sid or Phil or Geno on the ice.

THAT is how depth scoring is supposed to work, and it’s great that the Pens figured it out, but they apparently forgot all the rest of the shit about offense.

Penalties happened and were killed. Penguins kept passing prettily and even hitting a few posts. Letang lost his helmet, some blood, and his mind. DeStarted was DeReason DePens made it through. And the referees… dear lord, the referees. Missed calls and bad calls are common, sure, but last night was Next Level. BOTH coaches were losing their minds at various points and with good reason. It was like they weren’t even watching the game most of the time. Why would this be happening, you ask?

This league, man…it never gets out of its own way. pic.twitter.com/NE1NbIrsAu

Huh. Who would have guessed that a bunch of salty old dudes who played before helmets were worn and a game without 2 fights was considered a waste would want ‘more physicality and fewer penalties’?

Up in shots.
Down in blocks.
Tied in faceoff wins and goals.

And ready for the 3rd period. pic.twitter.com/4SFEeWBtzr

Another 9 blocks for Ottawa. Boucher is evil and just throws his minions out there with instructions like ‘if you aren’t bloodied and bruised, you’re not allowed back in the locker room’ or something. What a joy he must be to play for.

There was a 3rd Period. It looked a lot like the first two periods. Ottawa just sucks the life out of teams.

Oh goodie, free hockey. So we can see first-hand how a team with only 3 skaters implements the trap.

Instead, Geno effed a donkey, taking a too many men penalty that had to have Sully apoplectic. Of course, who do you yell at more – a tired Snek for not getting off the ice fast enough or a hot-headed Geno for doing the stupid thing? Personally, I blame the refs for calling the penalty and expect ‘high-ranking NHL officials’ to have a talk with them soon.

Since the Pens killed the first 4 penalties, the result was a fore-gone conclusion. I’m just pissed it had to be Dzingle-balls.

Pens dominated the entire game. These charts hurt my eyes, but being in the top right area is what you want. Just about all of the Pens Did That Thing, yet the trap, and 27 blocks, neutralized it.