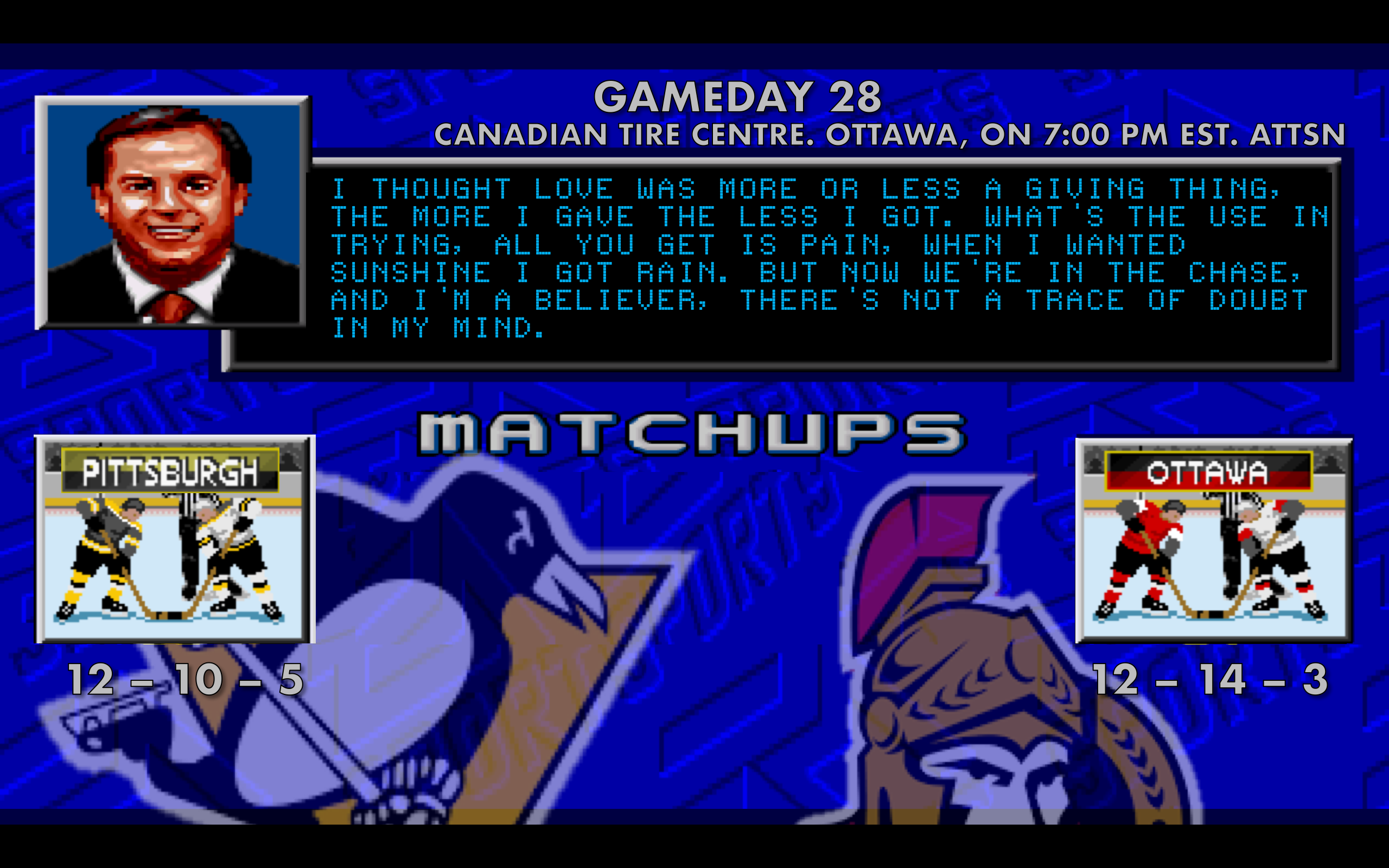 After winning two straight games after hanging six goals on their opponents, the Pittsburgh Penguins (and their fans) are likely breathing a little easier as the Penguins have finally completed their ascent out of the Metropolitan Division (and Eastern Conference) basement.  Now, with the Penguins in a three-way tie for the third playoff spot in the Metro Division, they head out on the road with a chance, by the end of the three-game road trip, to be tied with the division-leading Washington Capitals. The odds are good that they will at least emerge with sole possession of third place in the division, with games against two of the more sad-sack teams in the League in the Ottawa Senators and Chicago Blackhawks sandwiching a game against a New York Islanders team they just dispatched with an aforementioned six-goal pummeling.

Since they last saw the Ottawa Senators in a 6-4 loss on November 17, the Penguins have secured points in seven of their last nine games, twelve out of eighteen possible points or 66.67% to be exact. It’s been their best stretch of hockey since the season began, which looks particularly apt if you look at the season in nine-game chunks.

In the first nine games, the Penguins went 6-1-2 with a +14 goal differential; then in the next nine they went 1-7-1 with a -15 goal differential; and finally they’ve gone 5-2-2 with a +7 goal differential.  It feels like the ship is starting to right itself in many ways, even if there are some things one could complain about, such as the allowed shorthanded goals or the continued lack of secondary scoring, but in general there are more positives than negatives over the past nine games.  Instead of harping on the negatives (since I have done plenty that over the last week or so), I’d like to focus on some positives.

One of those positives has been the performance of Olli Maatta.  I feel like Maatta gets a lot of undeserved negative attention because of his slow skating, as if that’s the only thing that makes a hockey player good or bad in the NHL.  But, for being the third-most used player in the group, he has been a very good defenseman, particularly of late.  I have below a chart of the five defensemen who have played each of the last nine games: it is some of the more relevant defensive data and it is sorted by goals for percentage, which is the percentage of goals a player has been on the ice for versus how many have been scored against them.  Give it a look, absorb as much or as little of it as you want, and I’ll meet you on the other side.  (All data from NaturalStatTrick.com.)

To summarize this chart, Maatta is (amongst peers over the same timeframe League-wide in parenthesis):

Taken over the whole season and particularly when compared to how the team does offensively on the ice, it’s not as rosy for Maatta. However, he is still among the best in the League and on the team in limiting shots allowed of any kind, goals allowed, scoring chances allowed, high-danger shots allowed, and when he’s been on the ice the team’s save percentage is at its highest.  Maatta is 24 years old, and is the second-youngest defenseman on this team now that 22 year old Marcus Pettersson is in the fold.  (When doing this research, I learned that Pettersson has also been very good defensively this season.)  He is not a liability defensively by any stretch of the imagination.  I don’t buy the notion that he is a prime trade target on this team, and even if he is I think the team sees his value much differently than much of the fanbase.  He is a key defensive producer on this team, and when defense and goal prevention are at a premium, not just for the Penguins but across the NHL, that is a pretty valuable commodity to have. 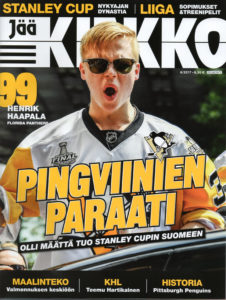 Speaking of goal prevention, over the same nine game interval Casey DeSmith has been good…not great, but not poor.  He’s been good enough in goal to help keep the Penguins’ opponents at bay while the offense goes to work.  In that nine-game span, of goalies who have played at least half of the time (>240 minutes), DeSmith has played 355 minutes (8th out of 28 goalies), is tied for ninth in save percentage, ninth in goals saved above average, seventh in goals above average, first in high-danger save percentage, and second in high-danger goals saves above average.  He does have the furthest average distance on goals allowed, however, but if he can improve on those shots from distance while keeping out those high-danger shots, we won’t have to worry about Matt Murray as much as we have had to.

The Ottawa Senators come into tonight’s game just two points behind the Penguins in the Eastern Conference standings, but because the Atlantic Division is one of haves and have-nots, they are five points out of the Wild Card race and they are tied with the Florida Panthers for the worst record in the division. 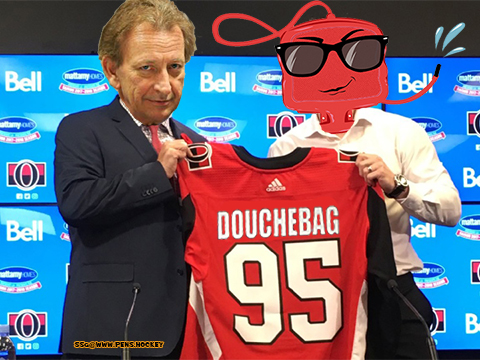 They’re a bit banged up right now; leading scorer Matt Duchene, who is among six Senators on the injured list, was injured in Thursday’s game and  will miss tonight’s contest.  After trading away Erik Karlsson to the San Jose Sharks prior to this season, it was clear that the focus would be on the young guys in the organization, and it’s those young guys who are making a substantial impact.  22 year old defenseman Thomas Chabot is among the League leaders in points, which likely takes the sting out of moving on from Karlsson.  22 year old center Colin White leads the team in power-play goals.  19 year old Brady Tkachuk is one of just six skaters on the roster with a positive plus-minus.

Things look good for the Senators’ future, but one of the biggest problems is in goal.  A few years ago Craig Anderson helped lead the Senators to an appearance in the Eastern Conference Finals, but now he and “backup” Mike McKenna have anchored the Senators to the bottom of the NHL in allowing the most goals and having the sixth-worst save percentage.  The last nine games have been particularly unpleasant for Anderson, who has allowed the most goals and has the worst save percentage amongst the same cohort as DeSmith.  Ottawa has also allowed the most shots in the NHL, so for a Penguins team that is rolling offensively they must look like a big, juicy…hot dog. 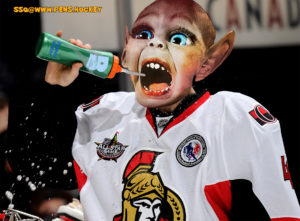 WHY DOAN WE DO IT IN THE ROAD