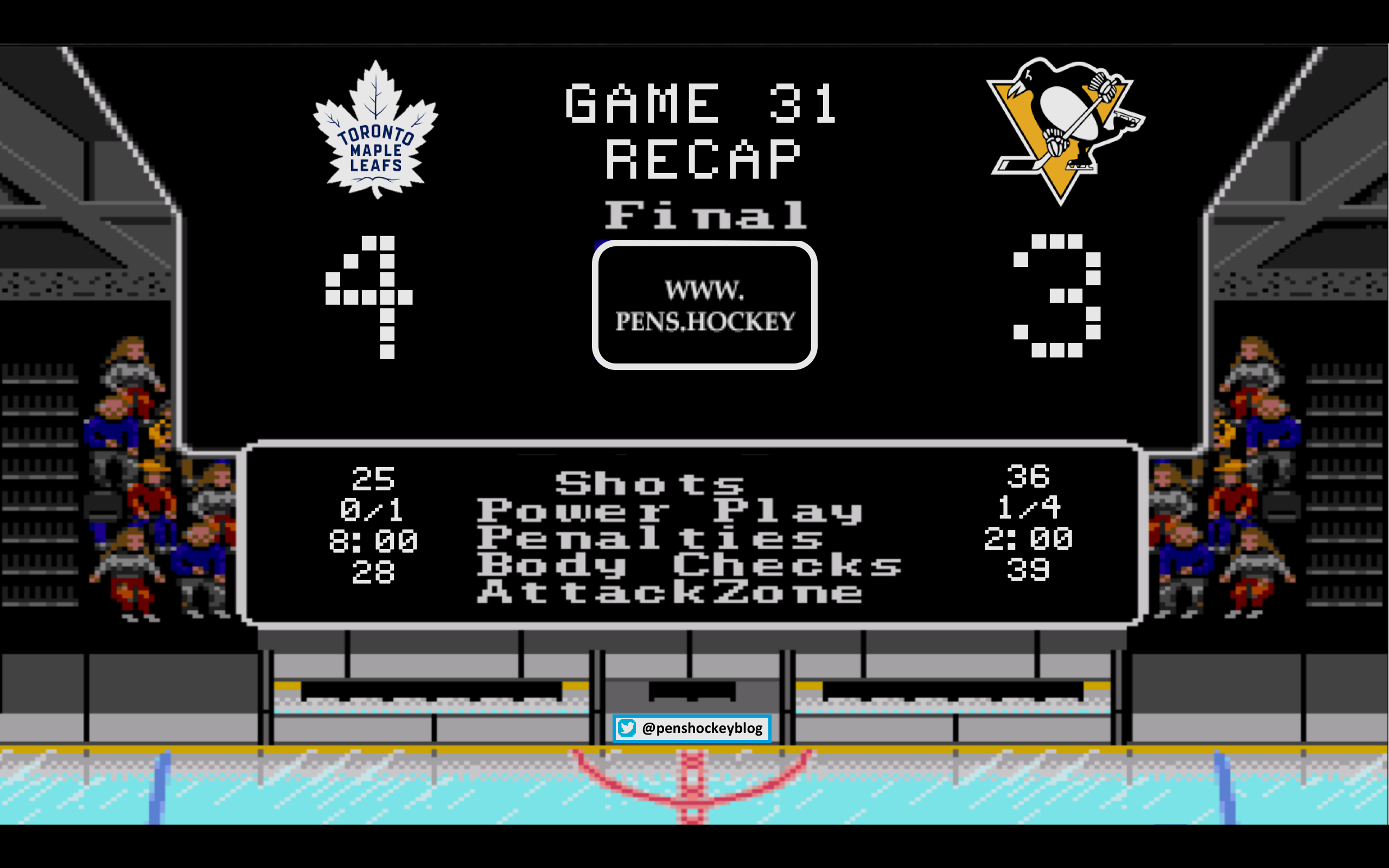 The best news heading in to this game:

Matt Murray was on the ice for morning skate in full gear taking full shots, he said he felt great afterwards. Mike Sullivan subtly downgraded is injury status, as the once week-to-week Murray is now day-to-day:

The story of the game comes down to the start of the first period. The Penguins asked for more Saturday night home games, perhaps they forgot that they still have to show up to them. Less than two minutes in three Penguins collide into each other followed by all five Pens standing still as Connor Brown fills the net, just 83 seconds into the game.

Off of the next faceoff James Van Riemsdyk took advantage of a scrambling Jarry (remember, MAF on crack?) and scored just 19 seconds after the first goal.

Luckily for the Penguins they remembered they had to hockey and temporarily stopped the bleeding. Eventually Toronto would go to town one more time when Tyler Bozak scored at the 12:55 mark.

Super weak shot from the point that went in and out of Jarry’s glove. There aren’t any excuses here, this puck must be stopped with no rebound 100% of the time. The second issue is there isn’t a defender around, as Riley Sheahan unsuccessfully has to back check to cover the eventual goal scorer. Overall this was a horrendous period of hockey for the Penguins and it doesn’t help that it was the worst we’ve seen Tristan Jarry.

The Penguins honored Ron Hainsey at some point:

Sullivan wisely decided that he had seen enough form Jarry and put in Casey DeSmith to start the second. The move was successful has Toronto didn’t score in the first ten seconds of the second period. The Penguins looked a lot more like the Penguins in this period, and suddenly the Maple Leafs looked like they were only as good as a team that took advantage of shaky goaltending.

Eventually the puck would fall on Brian Dumoulin’s stick in the break out and he would slide it up to recent call up Dominik Simon, Simon fitting in seamlessly with the big club knew all about the Penguins recent Sheahanigans.

Smart move here by Simon to wait for his opening and slide it over, you always assume the young guy just called up is looking to pass instead of shoot, and he timed the pass perfectly. As for Sheahan…

Those are Scott Wilson’s stats on the season.

Scott Wilson’s stats last season, which for most is what Riley Sheahan needs to beat to determine if the trade was a success. Sheahan now with 3 goals and 6 assists.

The Penguins would get a powerplay opportunity 2 minutes later, and after Sidney Crosby just missed an empty net, Frederick Anderson bent down to pick up his stick and when he looked up it was Geno in the flesh:

Just a killer shot by Malkin.

The Maple Leafs wouldn’t back down and one minute later a rising shot from the point was deflected down by Bozak, beating DeSmith

Close call to being a high stick, but the play was sent to Toronto for review and the goal stood.

The third period was all about the Penguins pushing and the Leafs hanging on like it’s the end of fall. They were able to hold the Pens off until DeSmith was pulled and Kris Letang continued distributing free literature

What a move by Letang. When Letang starts making moves like this offensively you know he is getting his confidence back, and that can only be a good thing at this point in the season.

The Penguins kept DeSmith out of the net and Olli Määttä attempted the death blow and of course it hit squarely off the post.