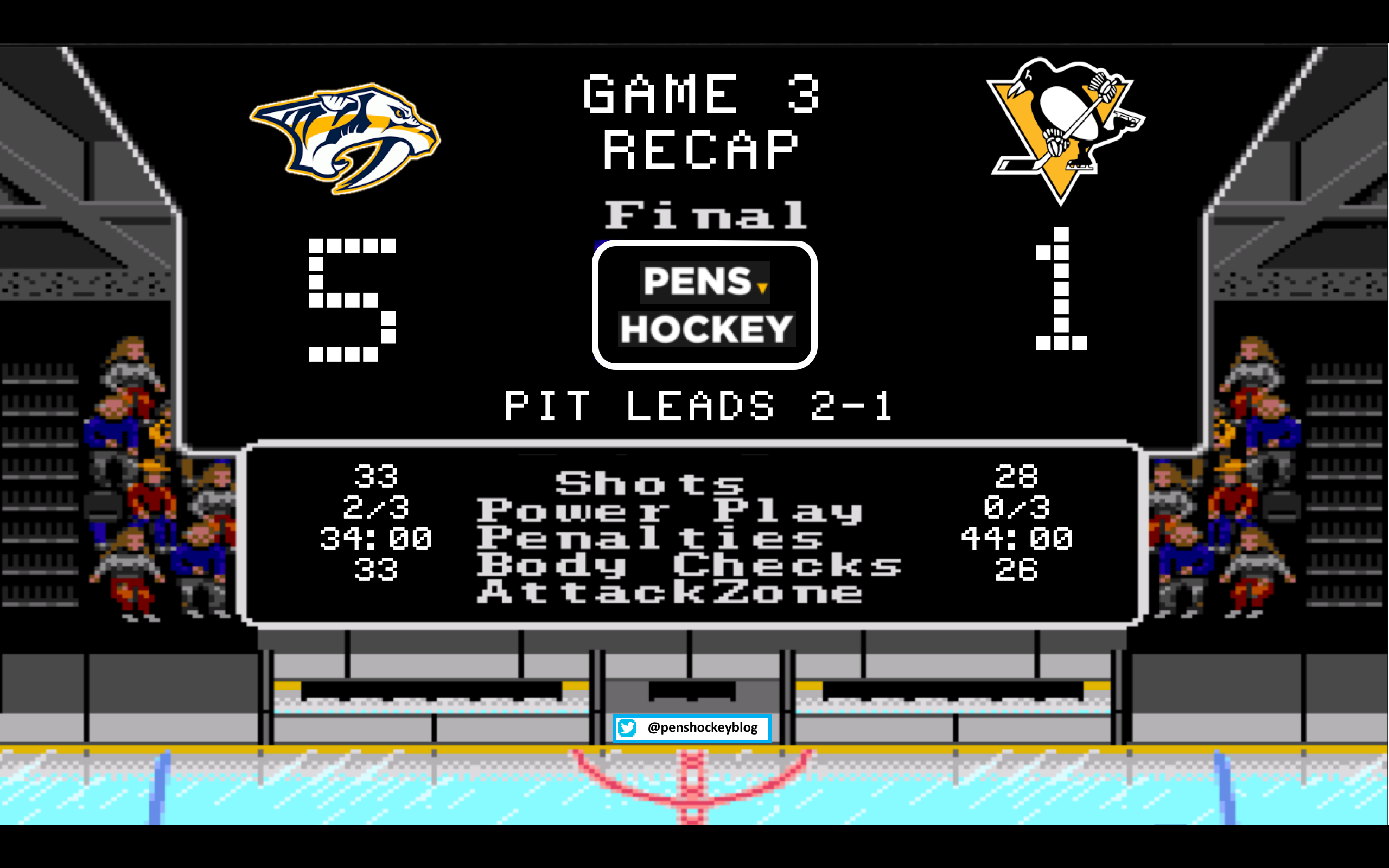 This is going to be a short recap because for starters it’s a Sunday and I am exhausted and secondly last night was the most predictable game in the series. It is hard to win 3 games in a row in the NHL playoffs. The Capitals couldn’t do it against the Penguins after falling down 3-1. The Penguins couldn’t do it against the Blue Jackets or the Senators. Add in that the team your playing is playing its first ever home game in a Stanley Cup Final and that odds of Pittsburgh winning last night were extremely small, it was a lame “guarantee” by Subban and I frankly would be more impressed if he put the same prediction on a less predictable game 4. Gotta hand it to Nashville though, they were rocking last night. I’m so tired of hearing all of the Pens fans on Twitter judging Nashville fans, that shit looked fun as hell unless you prefer not cheering during hockey games. If anything playing the teams the Penguins have played this postseason really makes me miss the 2008 and 2009 seasons at the Mellon when we didn’t know what to expect but everyone was loud as hell. It’s funny how expectations have taken away that aspect of the game (along with a new arena that people can’t afford), and it was really fun to see a crowd enjoying a game so much. Look at this:

From the first seconds of the video the crowd is heard. The entire video you can hear the fans in what was just game 2 of a series. Compared to this:

8 years later in a game where the Penguins would eventually eliminate a team. Just a completely different vibe. I’m not calling out Pittsburgh fans or anything, I’m just saying quit attacking the Nashville fans for having that arena loud as hell last night, it’s what Pittsburgh used to sound like.

The Predators had to play their best hockey in this game. Hands down. 2 minutes into the game it was The Jackal not caring who was supposed to win:

Guentzel’s 13 playoff goals top the NHL leaderboard. No rookie has led the playoffs outright since the NHL took control of the Cup in 1926. pic.twitter.com/DyKrc9ZVT4

Here’s what I love about The Jackal. This is a goal that your peewee hockey coach gets hard over. For anyone that played at a level with a coach you’ve heard the term “get to the front of the goal with your stick on the ice,” it’s so freaking simple and yet so many people don’t do it. Jake Guentzel is living the dream right now. Playing in Wilkes-Barre 5 months ago to being a household name in the Stanley Cup Finals that gets extra camera time when he’s on the ice, not bad kid.

This was the one time in the game the Bridgestone Arena was quiet and the Penguins really missed a huge opportunity by not scoring again in the first. Rinne made some saves, nothing flashy although NBCSN would make you think otherwise. The Pens couldn’t convert again and the period would finish 1-0.

5 minutes into the second period Justin Schultz is called for holding during a scenario that looked like literally every other defensive play ever, but whatever. The Predators scored on the powerplay after a shot changed direction on Murray, and as the building exploded you could feel the air leave the Pens. Nashville was fired up and would score 1 second later while the Pens were still on their heals. The most encouraging thing is what followed the second goal, the Penguins stepped it up and dictated play for the rest of the period. Pekka Rinne made the saves he needed to. Look, they weren’t spectacular saves by any means, NBC was all “OHHHHH and RINNE makes the SAVEEEEE” like he just tackled Trump during his Paris Pullout speech. They were simple saves. The Penguins continued to bring it and then with less than a minute to go a puck bounced off of the back of the net to find James Neal open. It was the straw the broke the Pens back in this one. Escaping the 2nd down 2-1 would’ve been fine, when that puck went in that was it.

Kunitz runs into Kessel and the Predators score on the gift. The game gets out of hand because the refs don’t understand that they are responsible for setting the tempo. When you let players get away with crosschecks early in the game you can’t be surprised when they try it late.

How, by reading the rulebook and understanding the game in which you are officiating do you not put your hand up. I don’t care if that was Mother Teresa hitting Alex Ovechkin, not making this call in the Stanley Cup Final makes the league look like a joke. And you know what happens, you get a pissed off Phil Kessel coming in and making the league look like more of a joke, all because you have refs that don’t do their job. Irwin laid on the ice like a stingray went through his chest, sorry but if you want to throw someone head first into the boards then you should’ve known you were going to get hit. The refs were called out by Mike Milbury of all people in game 2. They haven’t improved. I don’t care as much about the ticky tacky “hold” on Schultz, but when you aren’t making calls that put the players in danger, that’s a problem. The NHL doesn’t get it, because they think this is what people want. The biggest loss tonight wasn’t the predictable one on the scoreboard, it was the NHL showing it still isn’t concerned about their players safety and they don’t care if it is during a nationally televised Stanley Cup Final Saturday night game, they aren’t going to change. Referees don’t put their whistles away unless they were told to. I’ve played in high school leagues where protecting players was priority because the school had to pay half of all medical expenses due to the insurance plan… this gets called. I’ve played in self-officiated beer leagues with no real rules… this gets called. The only way trash like this doesn’t get called is if the person blowing the whistle isn’t calling the shots. It resulted in the NHL looking like a baby league, which is what the powers that be may think is best, but it was a joke.