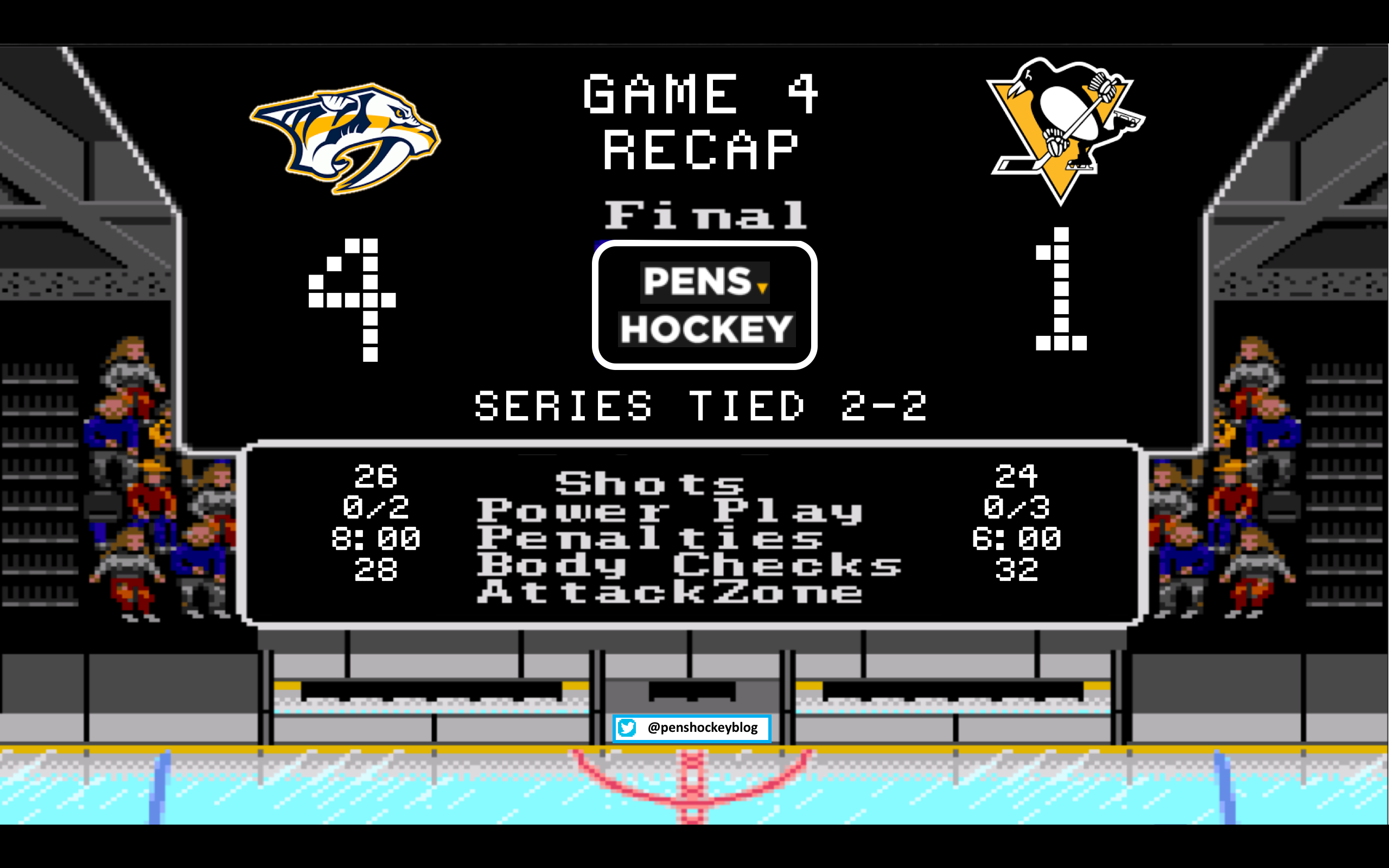 In the journey that the Penguins have taken us on since the Crosby/Malkin era began we have become so incredibly spoiled that it is easy to lose track of reality. After going to back to back cups in 2008 and 2009 we were spoiled to think that was going to be every year. After 6 years of disappointing playoff exits by teams that we all decided were definitely the group that would win it all was replaced last year by the team that none of us thought was a group that could win it all our fantasies began again. Starting June 13th, 2016 we were fantasizing about this day. Every single year a team wins a championship their fans immediately start dreaming about going back-to-back regardless of the odds and how incredibly hard it is. We were like every other fanbase, except we are getting to live it. Getting back to the Stanley Cup Finals wasn’t the dream though, we were greedy and went all the way, the Penguins would be back-to-back Champions, we decided. We’ve built this up in our heads for a full year. We have made jokes at other NHL clubs inferiority. We have bitched about the playoff seeding when it seemed the Penguins had an unfair advantage playing the Columbus Blue Jackets in round 1, a series destined for 6 if not 7 games according to those that know Pittsburgh hockey best. We worked ourselves into a frenzy when the Washington Capitals pushed back from a 3-1 series deficit to force a deciding game 7. Then the Ottawa Senators, a team we decided the Penguins should easily handle, pushed every last nerve as they constantly took series leads until a double overtime goal put the Penguins back where we have always had them. Now that they are here and our dreams have played out perfectly (sans LeHair, shocker) we assumed the next rightful step would be the Cup. The Penguins went up 2-0 in the series and that was it. Bring out the Cup. Everything fell into our fantasies and worked out so perfectly that we forgot in the oblivion that we painted that it takes a really good team to make it to the Stanley Cup Finals, and that there are two teams in those finals.

Last year the Penguins went up 3-1 over the Sharks so that’s what they were supposed to do this year. Last year the Penguins also upset the Capitals in 6 games and that’s what they were supposed to do this year. The comparison between last year and this year should’ve ended when the banner went up in October and a new season began. If we wanted to watch a sport with the same season year after year we’d watch basketball. The journey to the Stanley Cup has been nothing short of incredible and I am afraid that in our anticipation of this event for over a year we haven’t truly enjoyed this. It’s so easy to forget that just last series the world was ending when it was a 2-2 series, my memory is a little full of medical things but I am pretty sure the Senators were pulling the upset in that series and were supposed to win after that because of momentum or something. In the end Ottawa needed 5 perfect games from their goaltender even though everyone said they only needed 4, much like the Predators needed 5 straight perfect games from Pekka Rinne. NBCSN was all over Rinne last night, every single save was “spectacular” according to Emerick, in my opinion he looked like a catfish out of water and the Penguins were a bounce away. They were a Chris Kunitz breakaway away, a half inch desperation save by Matt Murray away.

The Pittsburgh Penguins are tied in the Stanley Cup Finals after 4 games, and because of our fantasies some of us are disappointed in that. A team without Letang and now without Bonino. A team that was fighting all odds to even get to the playoffs with 2,768,987 man games lost, some teams don’t make it back to the postseason the year after winning a Cup. The Penguins did. Most teams don’t make it back to the Cup the year after winning the Cup. The Penguins did. It’s been an incredible journey that some of us have either taken for granted or missed entirely with a focus on the ultimate prize. Now like every great story the final chapters will play out in war. 3 games. 2 in Pittsburgh, 1 in Nashville. The next team to win 2 games wins the Stanley Cup. Thanks to 2 days off between each of the next 3 games the previous 4 don’t matter unless there is a continuation rule on the score board that I am not aware of.

2 out of the teams 4 cup wins were 2-2 series. This isn’t unchartered ground for the Penguins, it just isn’t following the map to destiny that we designed last June or hell even two weeks ago, and that is why fans are on edge. So how about we all take a deep breath and reflect on this against all odds journey that has occurred before our eyes. The Penguins are here because they have earned every inch of the road, regardless of what literally every other hockey fan thinks. This series is truly Penguins vs the world. Everyone is cheering for Nashville and somehow the defending cup champions have become an underdog, which is a damn good place to be if you’re a Penguins fan. It was the underdog in 2009 that dropped game 5 to the dominant Redwings and had to win 2 straight, including one in a building where they throw animals on the ice. It was the underdog that was supposed to get handled once again by the New York Rangers in the first round of 2015 and then by the Capitals the following round. It was the underdog that was finally going to fall to Ovechkin and the Caps this season, especially without Letang. It’s the underdog that isn’t supposed to make it back to the final in the hardest to win sporting event. Now it is time for that team to go back to the drawing board just like they did following a 2-2 series with Ottawa. It is time for the coach that has put this team in this position to succeed once again to continue to do what he has done. It would be nice if the powerplay finally scored too but that doesn’t fit what I’m going for here. The only thing accomplished by Nashville last night was a guarantee that there will be another game in Bridgestone Arena, yee-haw. Someone will have a chance to clinch the Stanley Cup in that game, and it will be the team that prepares the best between right now and Thursday at 8:00 PM EST.

You’ve cheered for this team through everything. Some of us remember RiCo FaTa FoR FuCkS sAkE. Most of us remember Deryk Engelland on the 4th line. You’ve been through it, and just because it isn’t how your map looked doesn’t mean the team isn’t where they need to be. A team without their top $7 million defender isn’t sweeping anyone, and most likely isn’t going up 3-1 in the playoffs this late in the season. A team that is held together by pure will and determination has to fight for everything they want. That’s what the Penguins will do. That’s what they’ve always done under Sullivan. It isn’t time to point fingers at different players, to get clicks by saying so and so isn’t scoring, this goalie would’ve saved that, etc. It is time to realize how damn lucky we are to be cheering on a team that is 2 wins away. It is time for Pittsburgh to come together (#hockeyporn) as one fan group, united. I don’t care who you’re favorite player is. I don’t care what stats you want to spit out. All I care about, is that on Thursday night wherever you are you are as loud and supportive as you can be.  The roof of The Paint Can needs to open up from the noise. The Penguins fought through injury after fucking injury to earn home ice advantage for this very reason. It is time to give them everything they deserve, because folks they have given us way more than we appreciate. It is time to stand united behind the crest of the skating fowl that we all support and not the names on the back of the jerseys. It is time to show your faith in the Black and Gold, not your hesitation because things haven’t gone your way. Grow up Buttercup, because this is a best of 3 series and the next game is at home for the Penguins. It is time, Pittsburgh.