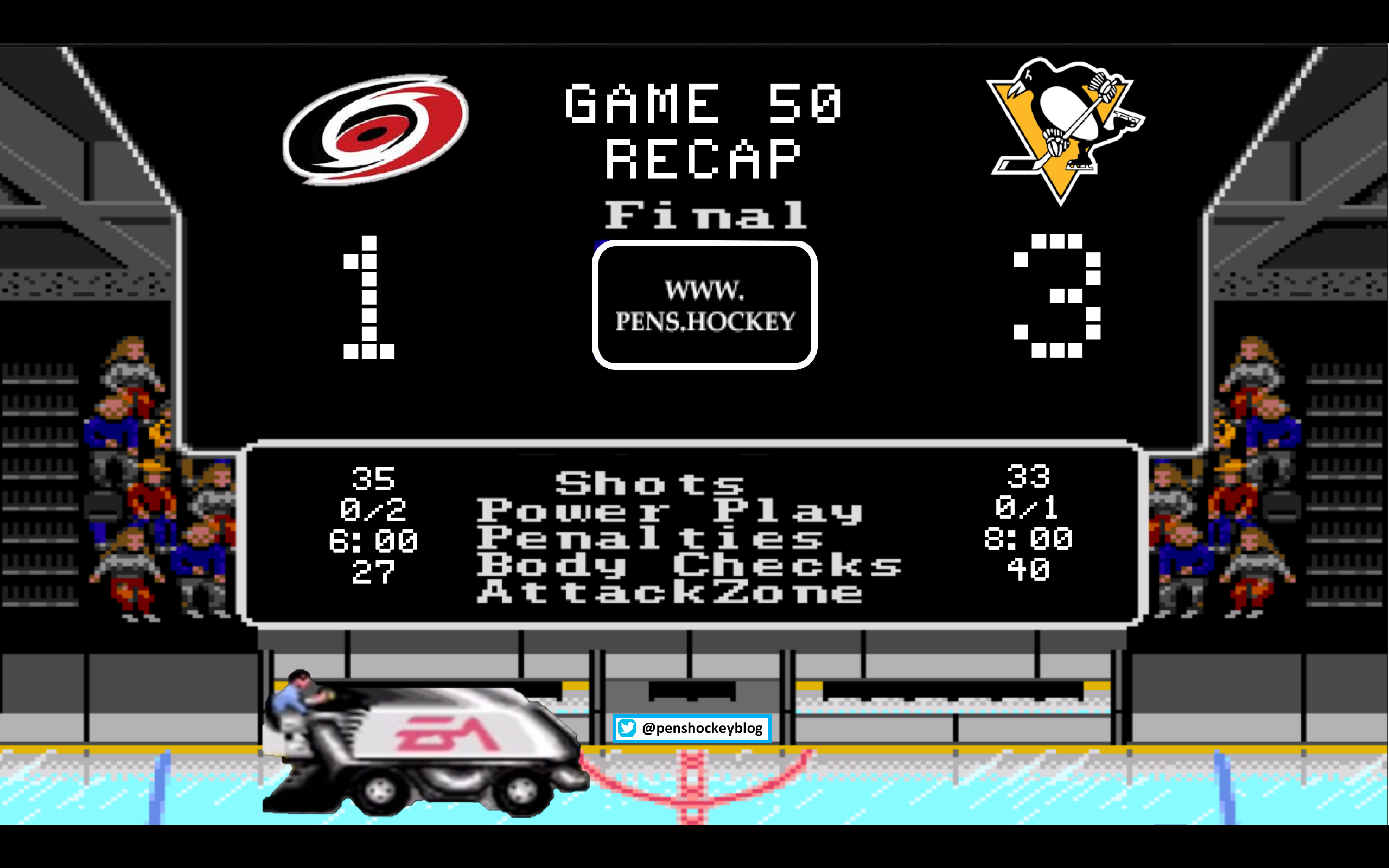 the banner is linked to game stats

The Penguins were finally back at home after a three game trip to the California coast, and man was it nice to see Matt Murray even if his interview was hard to watch:

Due to his career success it is easy to forget that Murray is only 23 years old, a 23 year old that just lost his dad. Amazing job by the Penguins to give him so much space.

So what you’re saying is he isn’t washed up yet? Look for my column coming up on this soon…

Just another one of those Penguin reclamation projects that make Jim Rutherford look purdy dang smart.

Now that is a crazy stat for you!

As we sort of expected Bryan Rust made his way back into the lineup, and that resulted in some line mixing:

The second was playing out a lot like the first until the Penguins got trapped in their own zone, and with a delayed penalty on the horizon the Hurricanes decided they didn’t need the man advantage to cash in.

Can confirm that neither Jovi or myself ordered this, #fakenews.

The Penguins did exactly what they needed to after the goal and continued playing the way they had been. Two minutes later there was another delayed penalty coming, but this time to the Hurricanes, and this time the Pens didn’t need the extra man.

Really great display of skill by Simon on both receiving this puck and then scoring the goal. Simon either A) read all the negative stuff I wrote about him in the last recap and wanted to stick it to me or B) knows Sprong just got sent down so he better start contributing. Pretty lucky that Simon had this puck and not Sheary, otherwise the shot would’ve been replaced by an unsuccessful pull-up along the boards.

We barely had time to truly celebrate the goal before Bryan Rust was racing down the boards in his familiar lane once again:

Bryan Rust just has this incredible ability to make plays and damn did we miss this guy, I mean honestly how has Rust more than doubled Sheary’s assist totals despite missing a month? First career goal for Dea, first goal of the year for the fourth line without Reaves on it, really not sure how the team will survive.

I mentioned that these Metro matchups were going to start feeling like playoff games, and man was this some fun hockey or what? Unless you’re not in to the back and forth, high speed transitions that has been a staple of the Pens success under Sullivan, in that case you probably hated this game. Both teams were just flying the rest of the period but neither could notch another one on the ole bed post.

10 shots for the Pens and 13 for the Hurricanes with both teams attempting over 30 shots through 40 minutes, gotta love it.

Unfortunately for us we haven’t seen the Pens enter the third period with enough leads to know what to expect right now, but we have seen enough 1 goal games to think this would be the same. The pace to this period was just ferocious with the Hurricanes throwing another 11 shots on net in the frame and the Pens adding 7 more while “protecting” the lead. The biggest difference is DeSmith stopped all 11 of the Hurricane shots, and Phil Kessel made some panties wet with a saucer pass:

Phil the thrill can dish the pill. Unbelievable pass in such a tight situation, I can’t even explain how difficult this pass is to execute. Then there is Jake, oh Jake Jake Jake, what a guy.

The goal was the sealer for the game, though the pace didn’t change at all afterwards. Like I said, if you didn’t enjoy this game then you need to wait until baseball season starts.

Guentzel on @jsdea10‘s goal celebration: “We were all kind of waiting for it because he did it down in Wilkes. He’s known for his goal celebrations. It’s the same one. Fist pump every time. Just a little harder this time. It was definitely a cool moment.”