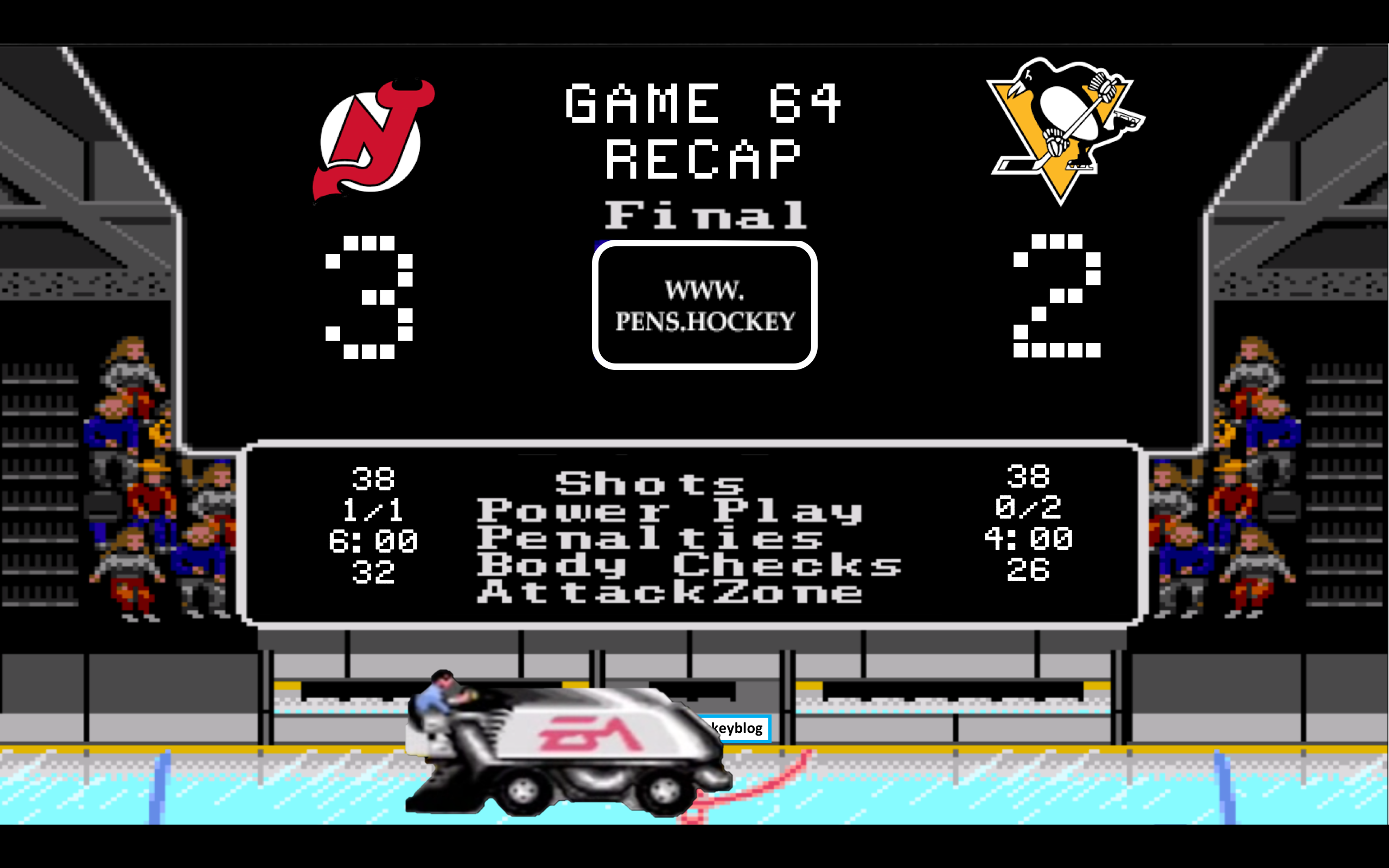 The biggest news heading into this game was that all visa issues were resolved and Derick Brassard would be making his Penguins debut. The second biggest news was seeing that the Philadelphia Flyers were in first place in the Metro at the beginning of the day. The third biggest news was something I saw on the Devils broadcast last night, since taking over the Penguins Mike Sullivan is 53-18-8 in games played after the all-star break, hot damn.

This stat could also be average # of sex chances per month after marriage. Grover went on to say that the last time the Pens averaged 2 powerplays per game in a month was last April when they played 5 games…

I knew he was playing some incredible hockey but I didn’t realize it was a career best.

So they should just score first all the time #hireradtocoach

With the addition of Brassard the lines were set but before we get there man does this tweet sum things up or what?

lol “he’s back” for Beau, poor Beau. Pour some for Beau.

The Penguins announced that Matt Murray is indeed concussed after taking a puck to the head so they decided to roll with DeSmith in net instead of the recently recalled Jarry. Tom Kuhnhackl also made his return to the lineup making ZAR the odd man out and you have to think this cranked the heat up to about sun level under Shearys ass.

The Penguins started the period with a lot of hop as we all eagerly waited for Brassards first shift like we expected him to score 12 goals or something. Before we could get there the Devils were storming down in a 2 on 1 that DeSmith made a huge save on with the shaft of his stick.

Blocker, stick… NO DICE FOR ZACHA!

DeSmith with a big save early. pic.twitter.com/9096XTxVax

Little did we know that that save wouldn’t be DeSmith’s best as he was constantly tested.

Finally we got to see the 19th #19 in the black and gold as he lost his first faceoff ever, after last night Brassard is only 128 games away from playing as many games as the last #19 for the Pens… poor Beau, poor poor Beau.

Pour some out for Beau.

One of the biggest changes that Sullivan made was reuniting Guentzel with Crosby on the top line in the absence of Simon, 8 minutes in that line was busy reminding all of us that they be good dawg.

Not a bad finish for a third line center, eh Mark? The Devils would challenge for goaltender interference and to the surprise of everyone the NHL got this call right. This was Sid’s 69th point of the season

The pace started to pick up and the Penguins started rotating d like the highschool cheerleader that got pregnant senior year while trying to hide Hunwick somewhere in the shadows. The team started getting a little too sloppy in the neutral zone and the Devils started getting a good amount of odd-man breaks. Eventually the Penguin killer himself Mr. Palmieri would tie the game up

Following the goal Evgeni Malkin went in to super human mode and it was unfreakingbelievable. Somehow Malkin didn’t score but man what a show he put on. At the end of the first the Devils took a penalty when they impeded on Conor Sheary during a semi-breakaway because apparently they didn’t get a good scouting report on Sheary. Malkin almost put one home on the powerplay but Kinkaid made a stellar save and the period would come to a close with a little over 80 seconds of powerplay time remaining.

Here’s a look at your #NJDvsPIT stats after the 1st period of play. pic.twitter.com/uWhGU5YksP

The Penguins used their carryover powerplay time to shit the bed so the game remained tied. Then that often overcalled ticky tacky slashing penalty that we saw called over and over earlier in the year came back when the stripes called Letang for it. The Devils went to work on the powerplay and after a broken play seemed to relieve the threat the puck was heading to Taylor Hall and he just doesn’t miss right now

With the lead the Devils became a completely different team and the Penguins started to look like they traded Cole for all of Ottawa. Shift after shift the Devils pushed the issue and if it wasn’t for some pristine goaltending from Casey DeSmith the game should’ve been 4-1 within the first 12 minutes of this period. Following one good shift by the 4th line Sullivan decided enough was enough as he started shifting Sheahan on the left with Brassard and Kessel with the team trailing. The shortening of the bench didn’t pay off right away but with about 5 minutes left the Pens finally started churning.

Suddenly things started to shift and we got treated to some wide open hockey going both ways which we all know tilts the ice in the Penguins favor. DeSmith stood strong and eventually the Penguins were getting a chance thanks to a tremendous play by Bryan Rust; after turning the puck over the Devils were getting ready to exit the zone until Rust speeds up from behind and uses one hand to wrap his stick around and poke the puck towards the boards and a quick transition to make sure the puck ends up on his stick. I wanted to make a gif of it but couldn’t find the footage but if you’re bored today go find it because it was a stellar move.

Following the turnover Guentzel skates behind the net and sends a laser out front to the stick of Matt Hunwick, and because we’ve dogged this guy so much it shouldn’t surprise anyone that this puck (and probably 40 more that he shoots) went in:

What a great feed by Jake Guentzel right here and also a smart attack from Hunwick to see the open space and take it. Hunwick knows that he is treading water at the moment so to just say “fuck it” and make this aggressive pinch goes a long way in my book.

Neither team would find the twine again in the second and somehow the Penguins once again escape tied.

Numbers through the 2nd period. pic.twitter.com/l0L48s76NF

After putting up 17 shots in the first the Penguins get just 7 in the 2nd mostly due to some really poor passing and sloppy neutral zone play. Rowney and Kuhnhackl both received 1 shift in the period while Conor Sheary was held to just a few shifts and only 3 minutes in the period.

Some bold analysis on the broadcast pic.twitter.com/zVT8tcAg70

The third period sort of looked like both teams were wondering how they got here, the Devils were confused that this game was still tied despite outplaying the Pens and the Pens were confused that they didn’t have 5 goals like usual. It didn’t take long for New Jersey to figure things out however, and following an initial save by DeSmith he wasn’t able to squeeze the post tight enough on a puck that seemed to have eyes and it was 3-2 New Jersey.

The Devils played the next 5 minutes like they wanted to drop the hammer on the Pens but DeSmith stayed strong despite 53 turnovers by Kris Letang.

The Devils played the remaining ten minutes by just clearing the zone and letting the Penguins load up time and time again. Somehow the Penguins multiple chances didn’t result in any goals and the team was left with no choice but to pull DeSmith. With the extra attacker the Pens kept the puck in the zone for an extended time but just couldn’t find the net as they failed to execute on the 6 on 5 with one of the Devils having a broken stick. The Pens spread out into powerplay formation and they were trying to find that bang bang cross-ice play but the Devils were packing it in tight. After about a full minute of pressure the Pens turned the puck over and were then gifted time when Coleman tried to be a hero with the full rink shot that went for icing. The rest would give the Pens one last chance at cashing in but Kinkaid thinks he is Brodeur against the Pens or something and he was there again to prevent any late game heroics and that was that.

The sky has fallen pic.twitter.com/xA2ZWqld00

This genius is predicting the Pens will fall to the last Wild Card spot and Boston will finish in first after two straight subpar performances that the team was clearly not invested in.

YEAH! PUT BRASSARD WITH SID AND GENO ON THE TOP LINE YOU STOOPID COACH YOU!!!!

Hoping this is just a troll pic.twitter.com/djyzw9BRyM