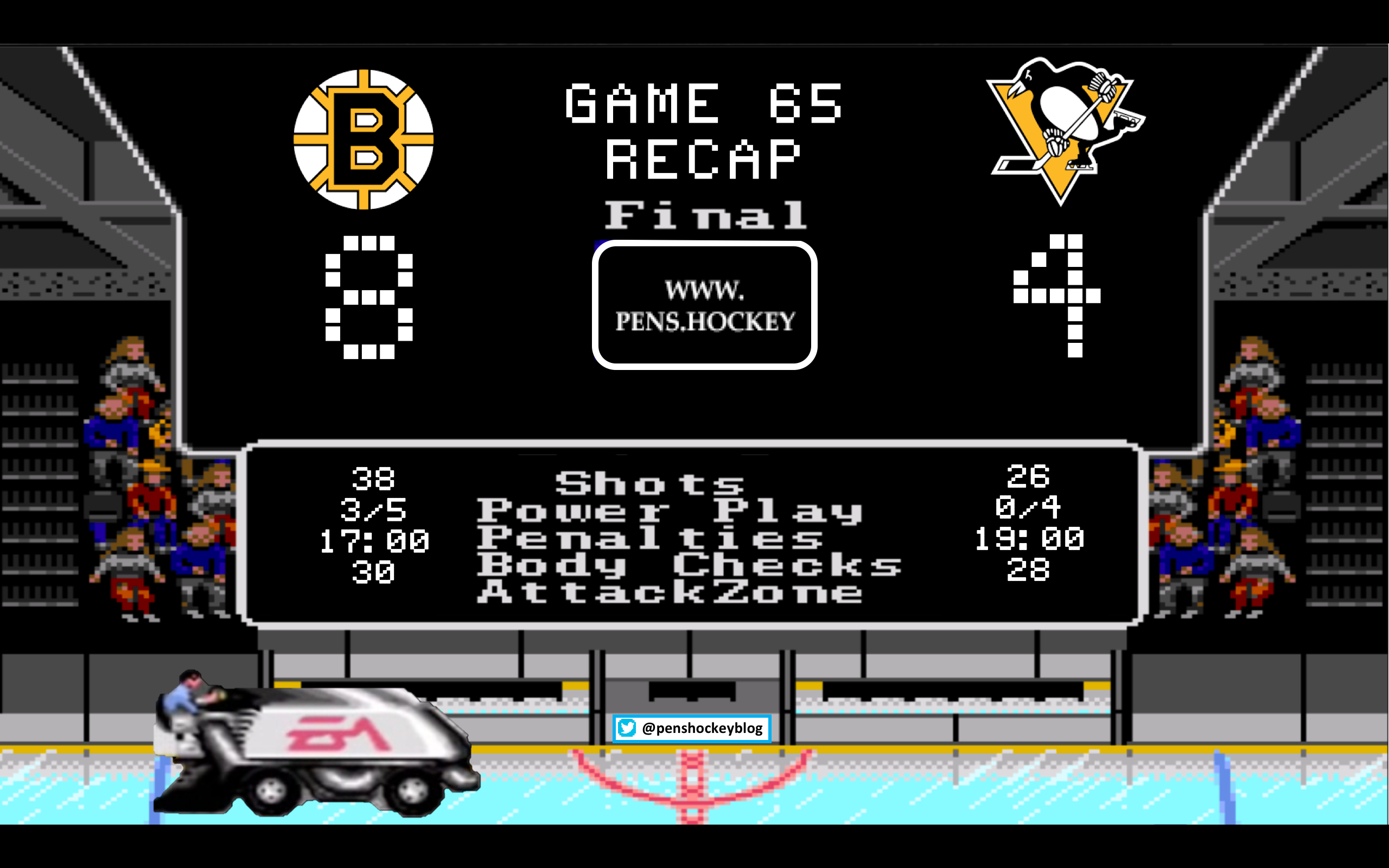 This one was talked up as being the game of the month, sorry for pumping that on you all. Perhaps for Boston fans that haven’t had much to cheer for since winning the cup in 2011 it was. A term I don’t really like is “measuring stick” game, I understand the concept but measuring any team (or player) on one game against another team is just silly. Regardless people love using the terminology and if we are going to adopt it then there is no other way to put it other than the Pens don’t measure up. Does this make sense? No. That’s why it is a stupid term. The Pens didn’t measure up in this game on this night. If the two teams played again tomorrow the score would have to be the same if it was a true measure of where the teams are.

So what you’re saying is we shouldn’t get our hopes up for this one.

Great find here by Grover. Brassard was #61 for the Drummondville Voltigeurs 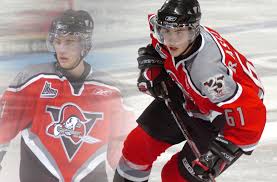 Letang has 35 games left to play before he hits the 700 mark.

Malkin did not have a goal Tuesday. Bum.

Off the opening faceoff the Bruins stormed down and did something and then it was the Pens turn, and less than a minute in we had a pretty good feel of what was in store when Olli Maatta found this hole in Rask

Just a perfect shot by Maatta here though it is a little unfortunate that Hagelin doesn’t get an assist on the play considering he was the main reason the team got the puck into the zone in the first place. Olli now has 6 on the year which ties his career second-best season.

The Bruins would continue pressuring and just 70 seconds later Rick Nash came storming down the boards against Matt Hunwick which is a matchup made in heaven if you’re a Bruins fan.

This goal took a lot of replays to digest it all and here is the final report. Matt Hunwick gets the blame because of his name and all the negativity following him, could he have had his stick in the lane better? Perhaps, but while being beat it seems his positioning isn’t terrible right before the pass:

Secondly we all jumped to blaming Kuhhackl for not covering his guy but the blame actually falls elsewhere: 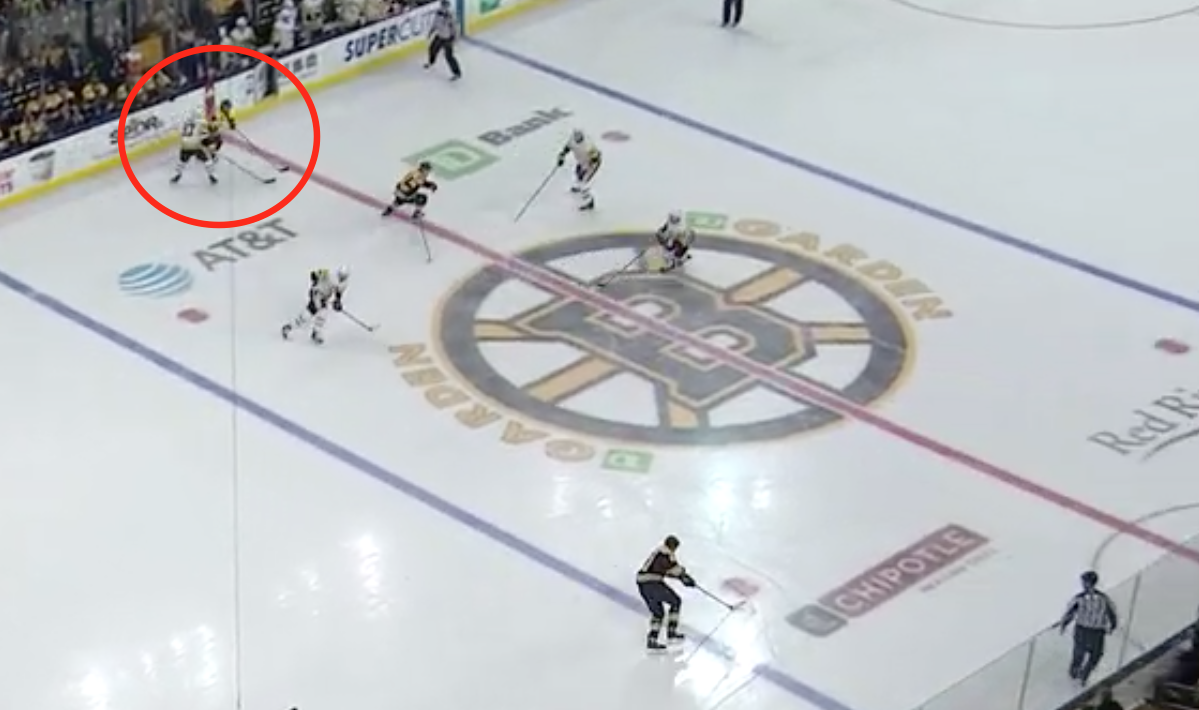 The Pens got caught in a sloppy change and that man was actually Crosby’s, in fact the effort by Kuhnhackl to almost get there is admirable. In the above image you see Crosby skating with the eventual goal scorer all the way to the bench and then…

Sid goes off, Kuhnhackl jumps on but Krejci wisely moved to the center of the ice that was given to him. Tough to blame Sid for making the change but if that was Matt Hunwick the torches would be lit so we have to be fair.

Not even a minute later the Bruins are throwing a shot on goal that gets deflected up into the air and actually lands on DeSmith’s back. DeSmith has no clue where the puck is as it rolls down his back and into the goal…

This one had just enough juice. 🍝 pic.twitter.com/5uY8AQDjVu

Now that they were trailing the Penguins wanted to respond but instead Evgeni Malkin gets called for a holding penalty or something and the Bruins were going to the powerplay. The Bruins had really good movement on the powerplay that got the Penguins to move out of position and Rick Nash found himself alone in front of the net:

I understand that the team is trying to figure out the penalty kill after losing Cole but having Oleksiak and Hunwick out there is not a good plan. Like, at all. For starters as the Bruins completely spread out both Oleksiak and Hunwick collapse to the center, in the still below there are three Penguins within a 10 foot triangle; this is probably not a good strategy when you only have 4 players on the ice. Also notice that 3 of 5 Bruins are now behind the Penguins defense:

So the pass is completed from the point, Hunwick makes a jump towards the receiver and Oleksiak finally realizes someone is behind him, this is also known as way too easy:

Despite the 3-1 lead and the promises from Penguins Twitter land that the game was over the team kept pushing, and eventually a puck got sent in behind the goal that Zdeno Chara had an easy play on. The problem was Patric Hornqvist was heading towards Chara like a bat out of hell and big bad Chara got nervous and misplayed the puck. Hornqvist said thank you very much and say hello to my little friend, you know him quite well:

Phil Kessel scores his 27th goal of the season from a near-impossible angle. pic.twitter.com/SQFGgEu38C

This is why Patric Hornqvist got the contract he did. Just an underrated play by him and all he did was skate towards a guy. Kessel with the finish and Rask looked as good as DeSmith even though everyone is saying he is having a Vezina caliber year.

I forgot to mention that following the third goal Sullivan pulled DeSmith for Jarry as a move to tell the team enough is enough. It paid off in spades when Tristan continued playing like he was in Florida and let a weak one in on David Backes 3 minutes after the Kessel goal:

.@Giostyle21 picked up his 300th career NHL assist on this @dbackes42 snipe. pic.twitter.com/oJIBYXFXL0

No excuses here, Jarry has to make this stop. In the image below I boxed in the area Jarry is protecting with his body and you can easily see why this puck went in. Instead of challenging the shooter Jarry is still in the blue paint which is not ideal as he is relying on reflexes alone to take away the exposed left side of the net. 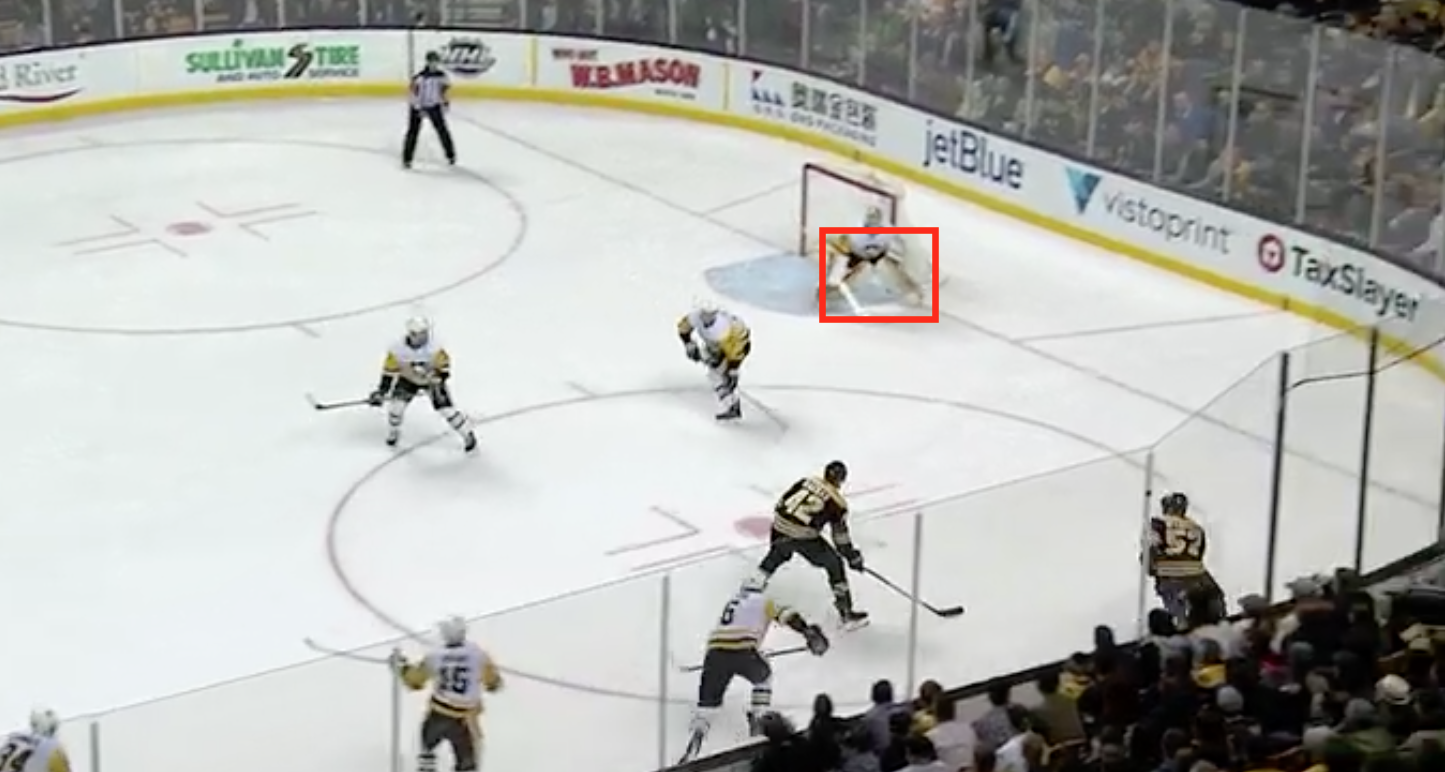 The Penguins decided they weren’t really going to play for the next four minutes and the Bruins threw everything on net, next thing you know another one is getting by Jarry and it is 5-2:

.@ToreyKrug‘s blast finished off our scoring in a wild five-goal first. #NHLBruins pic.twitter.com/tMjXA17o58

If you want to know what a goalie lacking confidence looks like, it is being completely in the blue paint on a shot from the point:

It seemed like we were going to end the period with the 5-2 score but as time was ticking down the Bruins try for one more shot on net that was blocked by Riley Sheahan and she banged she banged right down the ice and blew one right by Rask with 2 seconds left:

Just a great play by Sheahan to accelerate following the block and then have the awareness of the time remaining in the period. Surprisingly neither team would score in the remaining 2.8 seconds and after 47 minutes (not an exaggeration) the period would end 5-3.

Here’s a look at your #PITvsBOS stats after 20 minutes of play. pic.twitter.com/bRxMZGEHsN

The Penguins decided only getting 7 shots on goal in the first wasn’t enough of a challenge so they decided to take an early penalty in the second. This was a good strategy because the penalty kill suddenly sucks and the Bruins erased Sheahan’s late period heroics

The Pens managed one shot on net over the course of the next 9 minutes of hockey, because that will get the job done. Finally the team got a powerplay chance and they were all over Boston but the puck just wouldn’t go in. As fate would have it the Bruins would get another powerplay opportunity and David Krejci would cap off his hattrick

This redirect from @Giostyle21. 👌 pic.twitter.com/5SqmGn2QC9

Like everyone else in the world Schultz and Maatta forgot about Gionta as he sneaks in behind both defenders,  the bigger issue being Krejci snuck in behind too which seemed to be a trend in this game. If you are new to hockey here is a tip, you should never let any offensive player between you and the goal, let alone two players. The penguins continued playing without any sense of purpose and the Bruins took advantage one more time before the period would end.

Absolutely carving up the Penguins defense.

The Bruins match their 14 first period shots while the Penguins finish the period with 8.

Oleksiak a -4 and Hunwick a -2 by the time the period was over. This is a problem because 3 of the goals were powerplay goals meaning Oleksiak was out for 4 of the 5 even strength goals. I’m not jumping on the Hunwick hate train but it is pretty fucking obvious that this pairing is absolutely awful together.

Unfortunately for everyone involved the third period had to be played. Not really sure what happened in the first few minutes because I was typing up the words you just read about the second period, then I looked up to see Olli Maatta scoring again.

Olli got 2 goals in this game, so there’s that.

There would be no other goals scored in this contest. Despite what some may feel the game still remains a game, worth 2 points in the standings. At the end of the night the Penguins didn’t lose points for their poor performance and they rightfully didn’t gain any either. Obviously getting beat up one side and down the other will leave a bad taste in the mouth but would you rather this little skid happen now or the last week of March? Perhaps this team that was soaring so high just a week ago needed a little reality check. The back-to-back champions were starting to win games at will and maybe they needed a little dose of what it is going to take to win a third in a row, and that is no nights off. The Bruins delivered the message tonight, now it is up to the Penguins leaders to read it and respond. Personally this loss could not have come at a better time in the schedule for the team.