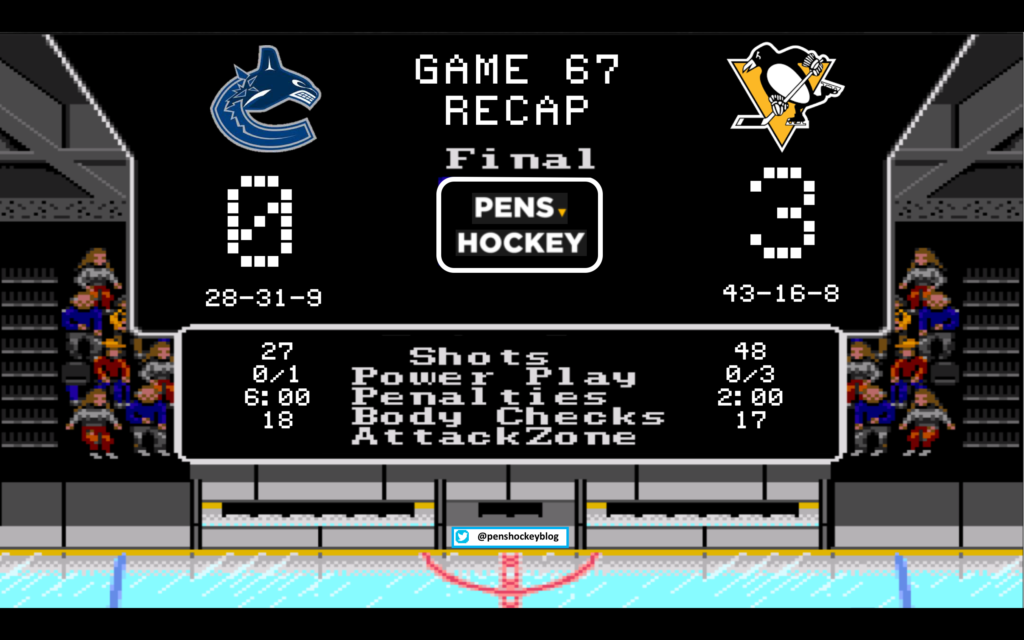 Moments before the game started the Penguins announced the Carl Hagelin will not play in this game due to an injury. Following the game Mike Sullivan stated that Hagelin will be out for  “about 4 weeks” due to a lower body injury. Hagelin was seen wearing a boot after blocking a shot in the previous game, so there’s that. At the completion of this game Bob Grove hit us with this stat, the Penguins have lost 104 man games to injury in the last 31 games played. That number sounds made up it’s so ridiculous. So on the road in a back to back situation and now you lose a forward the Pens do the only thing they can and that’s roll with 11 forwards and 7 defenders. Right before puck drop the Columbus Blue Jackets blew a 3-0 lead to the Sabres, so a loss in this one would mean absolutely nothing for the Pens.

The first period looked like a team that had played the night before playing against the Penguins. Vancouver didn’t play the night before, they are just slow. We’ve been subjected to some pretty fast hockey in the last few games  with Winnipeg and Edmonton, Vancouver in comparison is about as fast as that AOL Version 1.0.3 CD-ROM you got in the mail one time. Ryan Miller stood on his head in the first period, finally getting the best of Sidney Crosby in Vancouver which was probably a big moment for him. Matt Murray saved a goal with his nuts:

Anyone know how this stayed out? pic.twitter.com/JTEo0XYgV5

The Canucks would score at some point but it was waived off for goalie interference and the period would finish 0-0.

In the second period one thing became apparent, the Guentzel-Crosby-Sheary line does not need to be broken up. You knew when they were on the ice every single shift. Conor Sheary finished the game with a career high 8 shots, but Ryan Miller wasn’t having any of it:

Ryan Miller’s acting all kinds of crazy out there. #PITvsVAN pic.twitter.com/Ic4dMatX3G

There’s an old adage hockey coaches use in games like this, if the goalie is seeing everything then take away his eyes. Sundqvist understands, and does just that leaving Miller searching for eternity on a simple shot from Ian Cole.

Strike that. Reverse it.

You aren’t going to see a better screen than this, great play by Sundqvist. The period would finish with a 1-0 Penguins lead, but again it was because of Ryan Miller.

23 shots in one period after playing the night before is just impressive as hell. The Penguins worked their asses off in this game.

Currently investigating Ryan Miller for methamphetamine use during intermissions, because the piece of shit refused to turn into his normal piece of shit self. The Penguins had some joke named Matt Murray in net, I’ve heard his glove is weak:

You. Shall. Not. Pass. pic.twitter.com/ra2wkZrqNm

Murray was every bit as good as Miller, he just had the luxury of not facing the Penguins offense. The 7 defender rotation was attempting to build a wall but ran into a few hiccups along the way so Murray had to bail them out a few times to save the game. Finally with 5 minutes left Conor Sheary did something for all of the “Sheary is nothing without Crosby” folks.

(Please excuse us while we catch up on goal GIFs). pic.twitter.com/OSzyudvniv

The subtle chip to self off of the boards followed by putting his head down and out hustling to gain possession is one thing. Then the awareness that his defender going all in with him behind the net probably means Jake N’ Bake is alone is off the charts. What a play. Guentzel with his 10th goal in just his 30th NHL game. Sheary with his 40th point of the season in 47 games. Not bad for a 3rd rounder (Guentz) and an undrafted player.

The 2 goal lead would prove to be all the Pens needed, but Vancouver decided to give one last attempt to beat Murray and pulled the only reason they were in the game out of the game. With the empty net the puck came to Crosby, who made a play to Guentzel while being tackled. The puck eventually got to Sheary and he wasted no time shooting it from way back.

Guentzel-Crosby-Sheary finished with 21 shots, 2 goals and 4 assists. The fun thing about this line is it draws the best defensive match up in the playoffs, and then Sullivan casually throws out Malkin with Kessel… get the fuck out of this town. 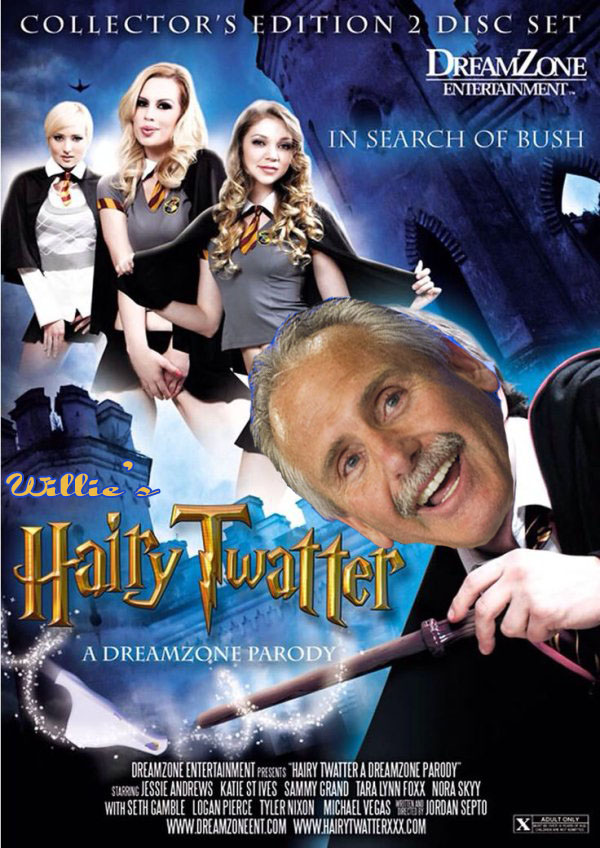 Sheary whips out his magic wand and screws em in the end..PIK-A-PORN