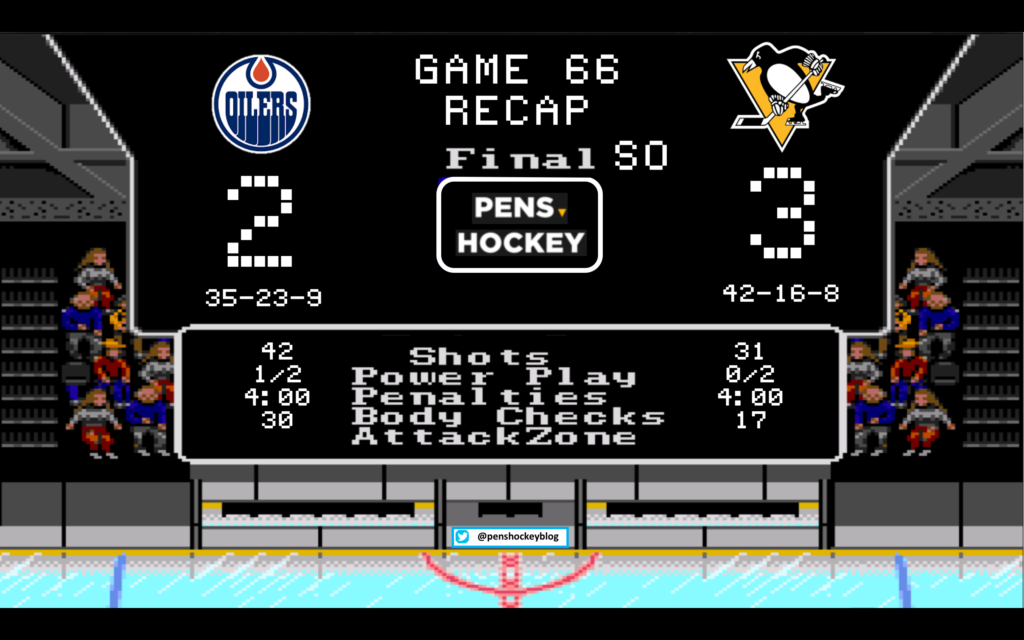 This game started with everyone and their mother talking about McDavid vs Crosby, and I have to say that for once the game lived up to expectations. Of course, the NHL is gonna NHL, so they didn’t put this game on national television, in fact NBCSN didn’t have any game on television last night, a Friday night when people aren’t often home with their families doing nothing. Also, NBCSN has zero games featuring McDavids Oilers this season… if McDavid were a Blackhawk or a Penguin they would be on every other week, absolutely mind boggling decision. Luckily for us we have Root Sports amazing sports coverage and expert analysts to lead the way.

There was no feeling out phase to this game, from the opening puck drop it was apparent that Edmonton only has one speed and the Penguins were going to have to match it. Luckily for the Penguins ole Jimmy Rutherford has spent the last two years building an engine that can answer to any car on the strip. 5 minutes in Justin Schultz decided it would be a good time to get on the board, as he casually throws a shot through traffic to the net.

And two periods to go. pic.twitter.com/xm0dNaZfwE

This is not a play Mr. Wilson makes at the beginning of the season, it is crazy how much he has matured over the year. Patiently takes the puck behind the cage and ignores the chaos that most players would try to shoot into, and finds Nicky Bonesy all alone.

Bonino is heating up at the perfect time for the Penguins, no complaints there. The period would continue to be balls to the wall. McDavids line seemed to be double shifting as they finished the period with over 8:00 of ice time in just the first. Marc-Andre Fleury was up to the task and bailed the defense out a few times in the first. Finally with less than 4 minutes left the best player in the NHL gets a break:

Even these Oilers still look like those Oilers at times. Evgeni Malkin scoring a goal while sitting on his butt behind the net watching the puck is pretty sweet. Also, this reaction at the bench melted a few hearts.

Nothing else would transpire in the first and the Pens would exit with the 2-0 lead.

Everyone assumes the Oilers will finally make the playoffs again, but where they will finish is still up for grabs and they have to fight every night. This is a team that hasn’t been to the dance in over a decade. So some people were shocked at how they responded to a deficit by coming out even quicker in the second, but it should’ve been predictable. David Desharnais finally bested Fleury at the 5 minute mark, which surprised everyone including the fans because they forgot the Oilers traded for him at the deadline. A few minutes later the Oilers had a golden chance on an odd man break but Fleury wasn’t using Murrays glove ; )

The period would end with a 2-1 Pens lead.

The third went much the same way as the other two periods. There were chances everywhere but both goalies came up with some big saves. The Oilers finally got their second powerplay chance of the game and McDavid was gifted a sweet bounce that he cooly found an opening for.

The period would continue with some chances but neither team could finish it off, Fleury with some unreal saves towards the end to earn the Pens the point.

This overtime was everything. McDavid was given a 75 foot break away at the tail end of his shift and couldn’t get enough energy to complete the deke around Fleury. Sidney Crosby with some Jason Bourne-like vision threw a blindsided back hand pass through traffic to Justin Schultz 40 feet away which nearly turned into a Sheary goal. Fleury made this ridiculous save:

3 on 3 overtime is everything the NHL could’ve ever wanted, I can’t wait for them to remove it.

It is a shame a game like this with this atmosphere came down to a shootout, but even the shootout proved to be exciting.

Draisaitl and Malkin were the first two shooters, both denied. The Oilers then used testtube as their second shooter, who was also denied by Fleury.

Penguins 2nd shooter was the captain:

One for our captain, one for their captain. So much star power. But there can only be one victor! pic.twitter.com/9cuapfLkxd

Nobody makes it look as effortless as Crosby.

Oilers 3rd shooter was the captain:

The Penguins third shooter was Phil Kessel. Rogers Place was still buzzing after the McDavid goal, but they forgot one thing. Phil Kessel is a goddamned American with the right to bear arms, and he isn’t afraid to shoot.

Talbot out 1-3 weeks with PTSD. 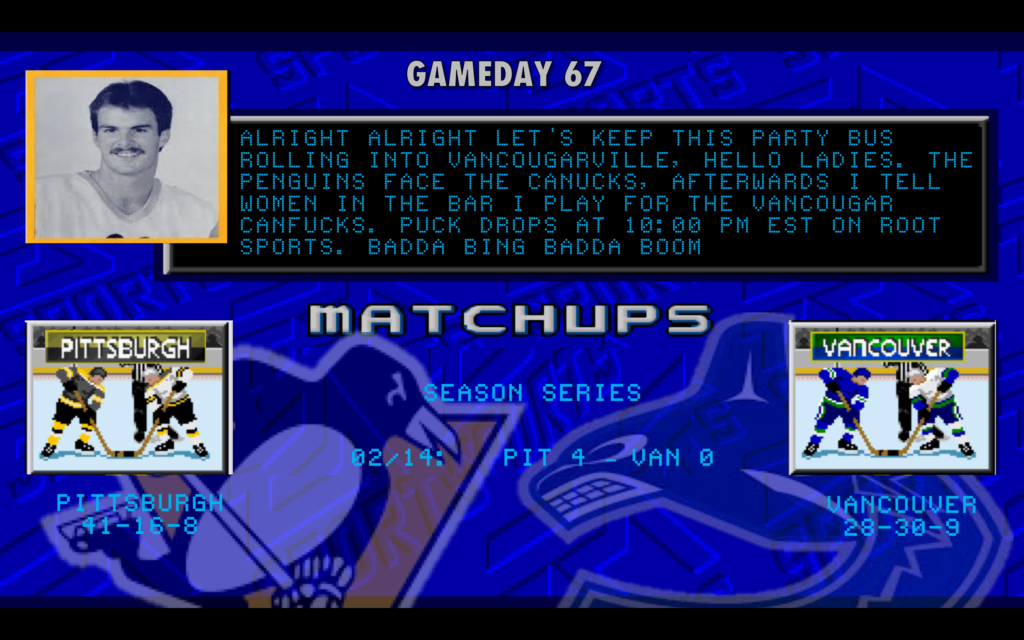 So the Penguins hopped on a plane and left Alberta to head to Vancouver only to return to Alberta in 2 days for the matchup with Calgary. What can you do? Vancouver is 8 points out from the final wild card spot and have played one more game than the team holding said spot. The Canucks have had this season play out the same way their last few seasons have, and yet they still refuse to embrace a full rebuild. They try to make just enough tweaks to be competitive again without admitting that they are doing their fans an injustice by not giving them the best team possible. Unfortunately for the Sedins it seems they will have to split up if either of them wants a cup. 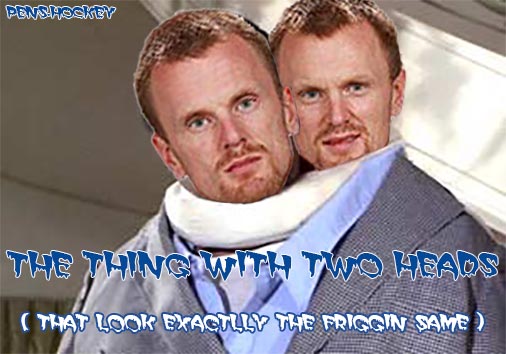 This will be yet another Vancouver team that has had a strong first half only to miss the playoffs by a handful of games, the same way it has been since they lost in the Stanley Cup Finals a few years back. The Canucks are 3-4-3 in their last 10, while the Pens are 6-3-1. The only thing going for Vancouver tonight is that the Pens played a full fast game last night and they probably don’t give a flying frk about the Canucks.

I assume the Penguins keep similar lines to last night, speaking of which, how awesome is the Guentzel-Crosby-Sheary line? I can’t wait to see the teams lines when Rust and Hornqvist come back. Should be Murray’s net tonight. As for the Canucks, Cramarossa is what the founders of Ponderosa should’ve named their buffet establishment. Brandon Sutter may actually play a game against his former team for once: 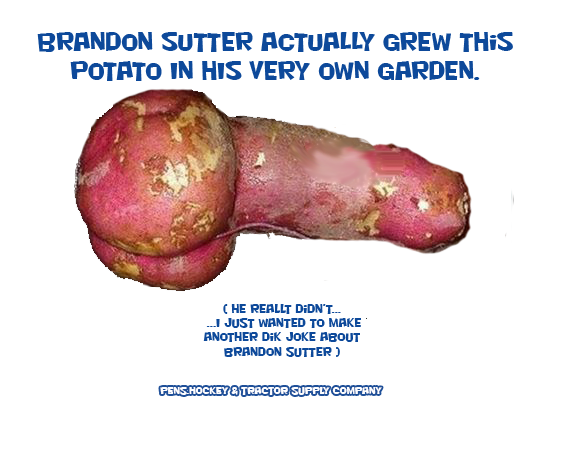 This would most likely play best with beer or a mixed drink, but if you like hangovers go ahead and use wine.

If these phrases are used, take one drink:

If these things occur, take 3 drinks:

If these things happen, take 4 drinks: 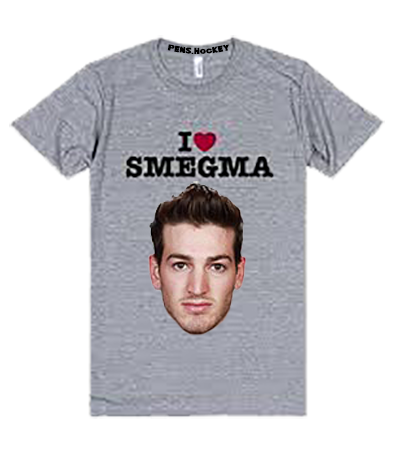 Drinks on the house

Hopefully we can make this into an every game occurrence or something, regardless have fun tonight! For those of you celebrating St. patrick’s Day in Pittsburgh 2 things: 1, you’re 6 days early, not sure what the fuck you’re doing and 2, use Uber, please don’t drink and drive. 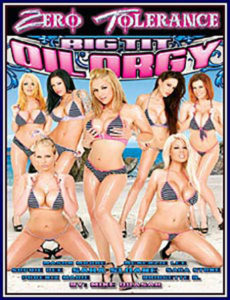 I was trying to find a more 'CRUDE' poster butt this one had a nice 'bounce' to it...PIK-A-PORN