The Penguins traveled across the border the same night that we lost an hour of sleep to play the Stars in Pittsburgh one night after playing in Toronto. If there was ever a time for the team to shit the bed it was going to be in this game, couple the circumstances listed above with the fact that the game was televised on nbcsn all but guaranteed a Dallas win.

It’s a Monday morning, you’re tired, I’m tired, so let’s get right into it shall we?

Following the game the day before everyone was interested to see if the Penguins would have their legs under them early. To the surprise of all they did, and they skated stride for stride with the Stars. In recent years the Stars have given the Penguins fits so this was a very welcome sight to say the least.

Two minutes in the Stars got a prime opportunity when Conor Sheary went off for a tripping penalty but DeSmith and the Killers shut it down. A few moments later it was the Penguins turn on the powerplay after a Devin Shore high sticking penalty but the Penguins top unit continued their trend of not scoring.

Once 5 on 5 play resumed the Penguins continued to carry the play eventually drawing a cross checking penalty. This time the first unit found an opening thanks to a killer pass by Geno:

Hornqvist’s goal gives him 20 goals for the eighth time in his career.

Fun fact: He has scored 20+ goals in all four seasons he’s played in Pittsburgh. pic.twitter.com/JYVdQbsrcC

This pass by Malkin is so good it received great reviews from Jeremy Roenick for crying out loud. Hornqvist was locked and loaded waiting for it and so much right has to occur to get this puck in that position in that time frame, as Roenick said, plays like these separate the really, really good players from the good players. Hornqvist hits the 20 goal mark once again, Mr. Consistency.

Following the goal the Stars picked up their play a bit but DeSmith was there every time to stop the threat. The Penguins continued pressing and carrying the play but Lehtonen also started to elevate his game. It appeared that the period would end 1-0 but the third line started getting some rotations going in the final minute, the puck was sent out to Oleksiak, and you know he was shooting against the team that gave up hope on him:

Another goal set up by a perfect pass, this time from the hands of Phil as he hits the 50 assist mark for the first time in his career. This was Phil’s 78th point of the year, putting him just 4 points behind his career high 82 points set in 2011-12. Man, you know that goal felt great for Oleksiak, who commented after the game about his fit with the Pens:

Oleksiak on succeeding with the Penguins: “I think it’s been a great fit here for me. It’s a great cast here, this D-corps, and Jacques [Martin] and Gonchar willing to work with all of us. It’s been a smooth transition and I’m just trying to make the most of this opportunity.” pic.twitter.com/bA7GzqwzR9 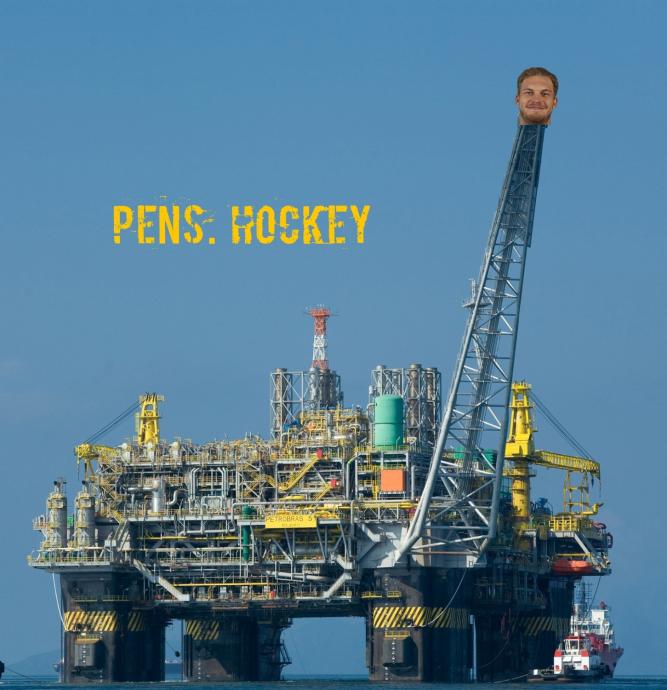 Neither team would score in the final 4 seconds and the Pens would take the 2-0 lead to the room behind the enthusiastic cheers of the Pittsburgh faithful.

The Penguins didn’t tire out in the second period as much as I thought they would in the second half of a back-to-back and instead continued pushing the flow of the game. Of course the Stars taking a penalty 0:19 into the period helped the Penguins get momentum even if they didn’t convert. The Stars then thought taking another penalty 5:30 into the period would be smart so the Penguins continued to control the play. This powerplay was again uneventful but anytime the team can get 4 of the periods first 7 minutes with the man advantage while trying to conserve legs they will take it. As 5 on 5 play resumed the Pens continued tilting the ice though Dallas answered when they could but for the most part they were like the high schooler at the party, one shot and done.

10 minutes into the period Guentzel took a slashing penalty and then during that penalty kill Maatta got sent to the sin bin for high sticking. It took the Stars about 2 seconds to cash in on the 5 on 3 and make it a 1 goal game.

Spezza sends a nice pass across the crease and Radulov drops to one knee and fires it past DeSmith. #GoStars pic.twitter.com/jjCEsWx4i3

DeSmith was that close to making a spectacular save. 4 minutes later the Pens were back on the powerplay and this time they were able to score when Hornqvist made a good play in front of the net. The Stars challenged the goal for offsides and Sullivan was screaming at the refs confused about the Stars ability to challenge the goal since they had already used their timeout. Turns out the NHL has a rule that you don’t need a timeout to challenge offsides because if you’re wrong you get a penalty instead of losing a timeout. The goal was deemed offsides because Malkin’s skate was in the air when the puck entered the zone:

If you recall a similar play happened in game 1 of the Stanley Cup Finals last year that reversed what would’ve been the first goal of the series for the Predators. I didn’t agree with the call then and I don’t agree with the call now. The Blue line should be treated like the endzone in football as a plane that extends vertically and physical contact doesn’t have to be made. I can’t decide if I like the no timeout challenge rule. On one hand it means a team can potentially challenge multiple goals in a game, on the other had the Stars lost the challenge the Pens would’ve been up 3-1 and going back on the powerplay.

The remaining minutes were played out much like the rest of the game with the Pens carrying the play but this time there would be no late period heroics.

As we witnessed during the Philly game on Wednesday Sullivan is getting his troops ready for playoff hockey by locking down in the third period. They did this pretty well against Philadelphia on Wednesday night and did it even better against Dallas. The Stars were trying their best to get this game tied but the Penguins just clogged up every area of ice. Time and time again the Penguins forced the Stars to either turn it over in the neutral zone or at most get a low grade scoring chance. DeSmith was there when the Stars broke through and things were looking up for the Pens. The Stars pulled their goalie in the final 2 minutes and Evgeni Malkin finished things off

The Stars wouldn’t score in the remaining 44 seconds and we were waking up to this headline: 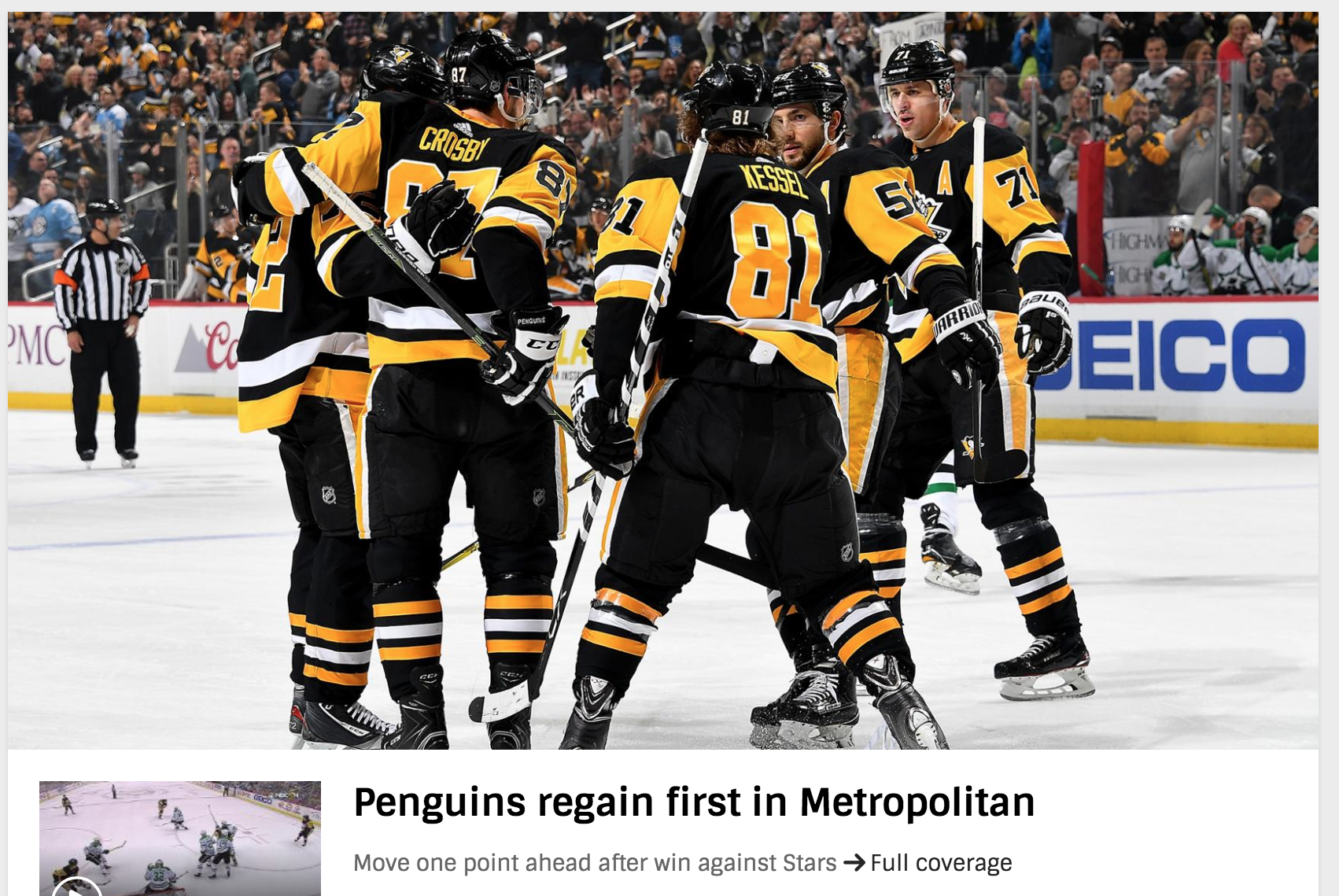 Mans this my friends, is what it feels like

starting Monday with the deuce.

– The attention to detail defensively was huge for the Pens in this one, only allowing 18 shots on goal to a very hungry Dallas team

– Olli Maatt has his best defensive game of the season. His scoring chances for vs against numbers were off the charts good

– DeSmith with another solid performance, starting to get that feel that if he needs to steal a game in the playoffs he will be able to

– With the empty net goal Malkin is now in a legitimate race for both goals and points with 12 games remaining.